iOS and Android increasingly stretch into every nook and cranny of our tech, whether it be our TVs or our home’s thermostat. One more area they’re doing battle is in cars. Apple launched its CarPlay system last year, but Google has recently fought back with Android Auto.

While both systems main aim is attracting big car companies to integrate and support their systems, after market brands like Pioneer are getting in on the act too. It was the first brand to market with CarPlay systems, and it’s the first to support Android Auto in its systems. It invited us along to have a go with its first Android Auto system, to see what it’s like to use. 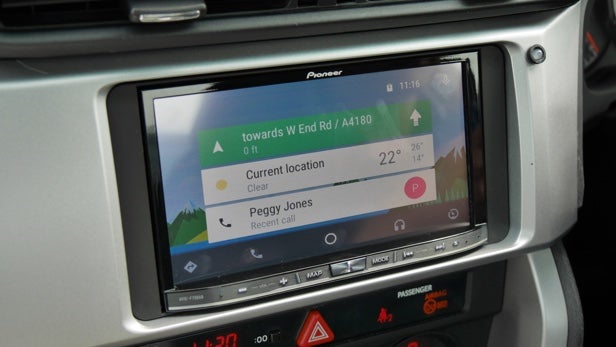 I have to start with some bad news, though. If you thought upgrading your car’s system with Android Auto would be easy, Google’s decision to require a 6.5-inch minimum screen size means it’s a pricey upgrade.

Pioneer’s cheapest Android Auto system is the AVIC-F70DAB pictured, which costs around £700 to £800. It supports CarPlay as well, and has all the bells and whistles of a top-end in-car system, but Pioneer’s cheapest CarPlay system costs just £350. Pioneer tells us cheaper Android Auto systems will come at a later date, but for now you’ll have to pay through the nose to get it. 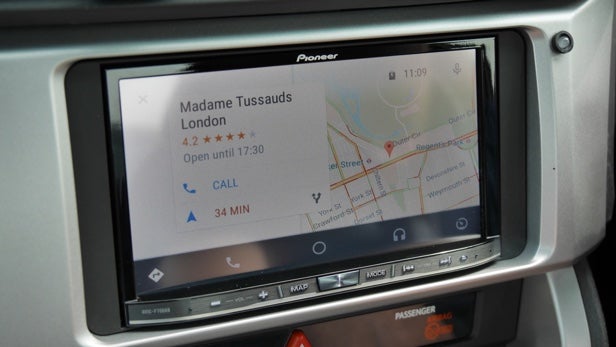 There’s a high barrier to entry then, but Android Auto makes a very good first impression. The opening homescreen is reminiscent of Google Now. Slim cards summarise the most recent events, such as messages received, calls made and locations you’ve searched for or navigated to.

You can scroll up and down the list and reminders will appear here too, but you can’t swipe to dismiss them like you do on a phone. This is because the interface, like CarPlay, is designed with an eye on safety, so it tries to keep distractions and complex interface options to a minimum. 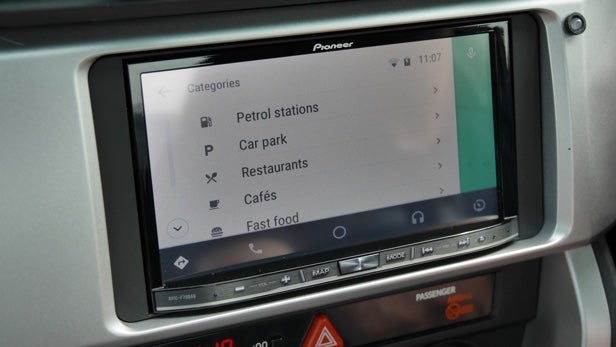 It offers the same basic features as CarPlay, too. Navigation, calls, messaging and music are the main features, each accessible via shortcut buttons along the bottom of the screen. But Google’s trump card is its voice search, which gets a prominent shortcut in the top corner.

While it does basics like Siri does, Google’s superior search means it’s better at giving you information on the go. For instance, ask it how far it is between London and Glasgow and it will tell you, reading the answer out loud. 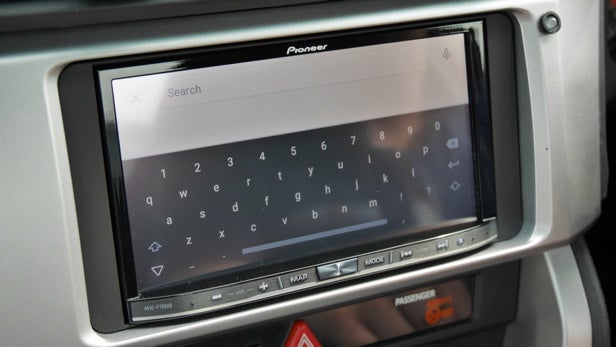 The only place you can use text input is on the navigation system, where you can use the keyboard instead of voice to search for locations. But you can’t type messages and any messages you do receive are read aloud rather than displaying on the screen. Another limitation is you can only search for contacts using voice — you can’t scroll through a list and select them.

Music apps supported include Google Play Music, Spotify, Radioplayer (UK-only) and Tune-in Radio. They all look and work remarkably similarly, which is no accident. The basic idea is that each app works in a similar, predictable way, so you’re not focussed on remembering how each app works.

While this does strip some of the more advanced features from apps, it makes them easy to use. You can use voice search to search and pay specific songs or artists, and you can even specify which music app you want to play in. 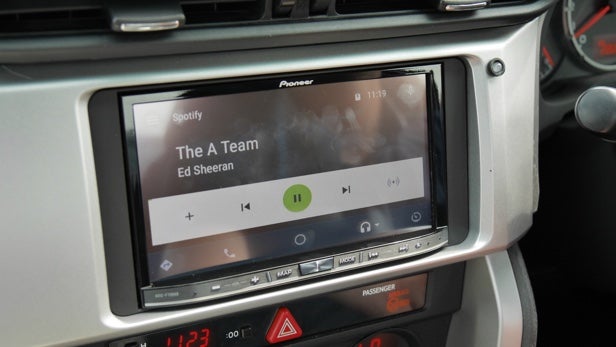 There’s nothing especially flashy about Android Auto, but for a system that’s just a few months old it looks and feels quite mature and polished. It’s a shame that after market systems are so expensive right now, but it feels like a more cohesive, attractive system than Apple CarPlay right now.