The Ryzen 5 2400G and Ryzen 3 2200G are AMD’s two new APUs (accelerated processing units). In other words, they’re CPUs but with a built-in graphics processor.

APUs are nothing new and, indeed, all Intel’s mainstream CPUs have integrated graphics too. However, when AMD first introduced its Ryzen CPUs last year, it did so with chips that omitted onboard graphics.

As such, if you didn’t need a powerful, discrete graphics card for running games, it didn’t make all that much sense to opt for a Ryzen processor. Now, though, the 2400G and 2200G bring AMD’s latest CPU and GPU technology together into one chip, making them ideal for powerful small-form-factor PCs.

Both the Ryzen 5 2400G and Ryzen 3 2200G are from the new family of APUs that AMD has collectively codenamed Raven Ridge. They combine AMD’s Ryzen CPU technology with its Vega graphics, but also bring some improvements over the first generation of Ryzen CPUs. 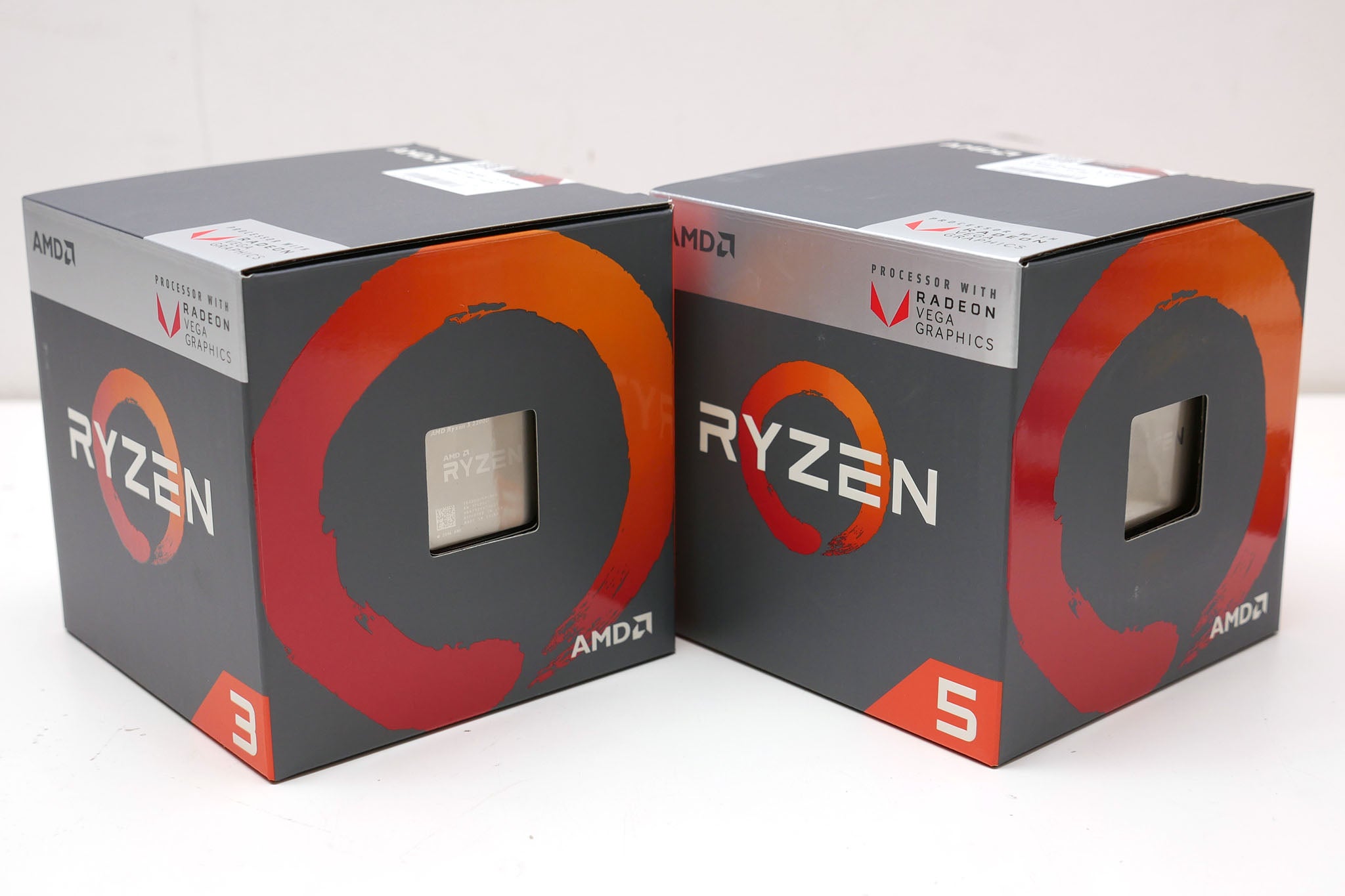 Specifically, these chips support Precision Boost 2. Precision Boost is Ryzen’s automatic overclocking technology that boosts clock speed depending on workload. In the original version there was either a dual-core boost frequency or an all-core boost frequency, but with the new version the boost will scale according to how many of the processor’s cores are under load.

The Raven Ridge processors also support faster RAM. While you could run faster RAM with the existing Ryzen chips, official support topped out at DDR4-2666. Raven Ridge pushes this to DDR4-2933.

Otherwise, the 2400G and 2200G offer fundamentally the same features as the previous Ryzens. They use the new Zen microarchitecture, which is the key to how with Ryzen AMD has finally been able to provide comparable performance to Intel for the first time in years. The company’s previous microarchitecture – Bulldozer – simply couldn’t compete. 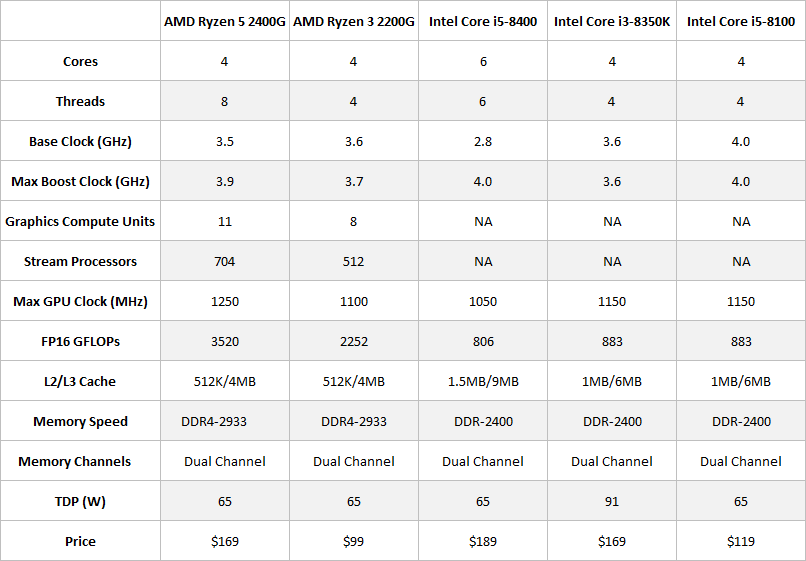 Also essential is that AMD has caught up with Intel when it comes to the manufacturing process for its chips. Often with previous processors AMD would lag behind on the march for ever smaller transistors, automatically giving Intel an advantage. Now, both AMD’s and Intel’s latest chips are built using a 14nm process.

Meanwhile, one of the most attractive aspects of all AMD Ryzen processors so far is that they’re multiplier-unlocked, so can be overclocked easily. This has carried on through to Raven Ridge. It seems an unlikely priority for users of this type of processor, but it’s always nice to know that there’s extra performance on tap. 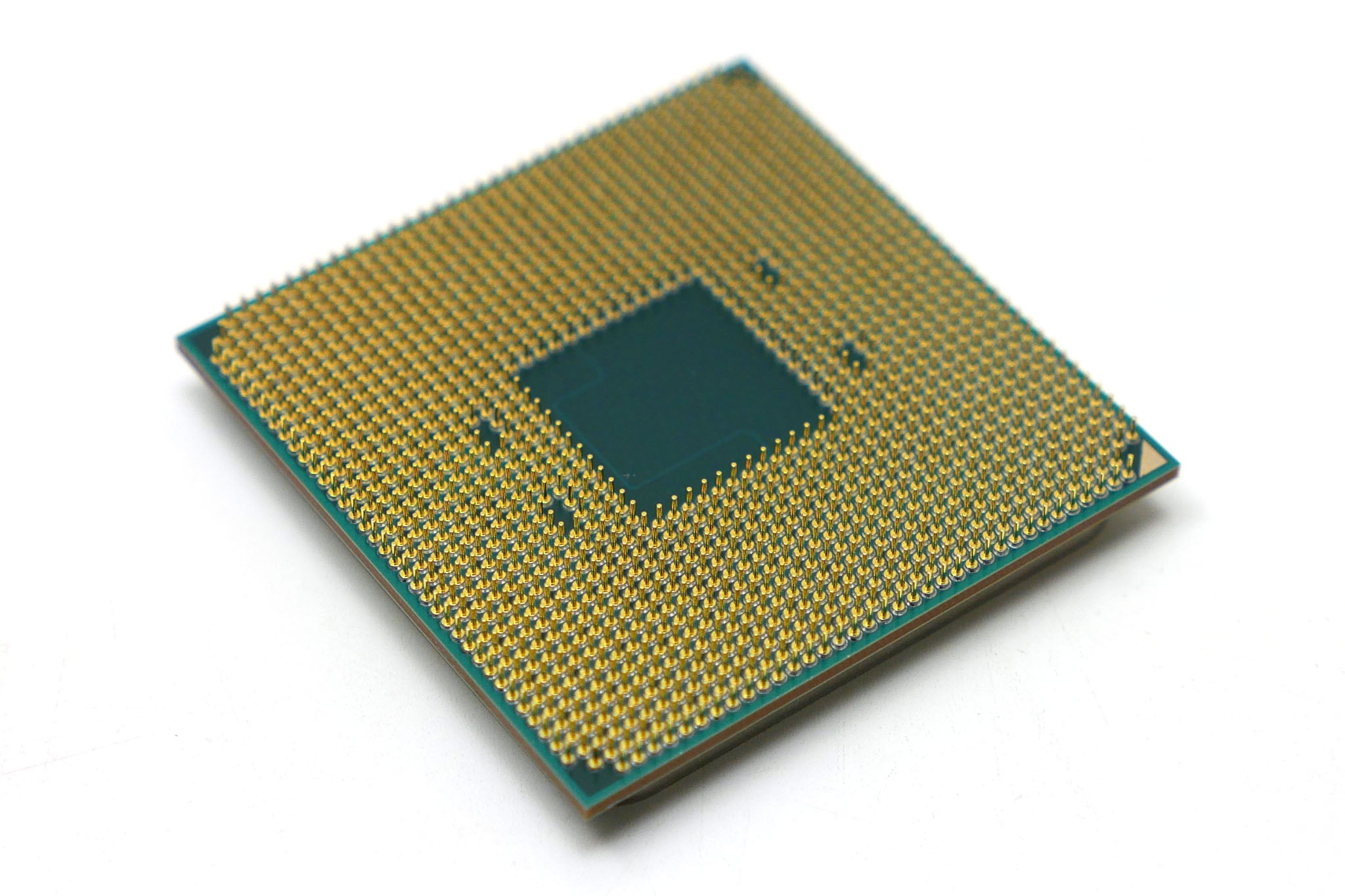 Of course, the biggest addition with Raven Ridge is a graphics processor, and it’s here that AMD is really hoping to take the fight to Intel. While the graphics processors on most Intel chips are perfectly adequate for all desktop use and can just about play some games, they tend to be fairly limited. With the Vega graphics on these chips, AMD hopes to provide genuinely playable gaming performance – AMD’s own figures suggest the GPUs on these chips are around twice as powerful as on Intel’s competing products.

On the flipside, the main downside to all AMD’s Ryzen processors so far, including Raven Ridge, is that their CPU clock speeds can’t compete with Intel’s. The fastest Ryzen chip boosts to a maximum of 4GHz, while the fastest Raven Ridge is the 2400G, which has a base clock of 3.5GHz and boost clock of 3.9GHz. Intel’s fastest chips can hit 4.7GHz.

Intel’s closest competitor to the 2400G, the Core i3 8350K, runs at a constant 4GHz, suggesting the fight is reasonably close, pound for pound. However, the 8350K will readily overclock to nearly 5GHz.

It’s for this reason that, despite both Raven Ridge and Intel’s 8000-series Core I processors ostensibly being direct competitors, they’re likely to have slightly different use cases. The sheer clock speed of Intel’s processors means they’re the best option for gaming, as most games still rely more on clock speed than multi-core processing power. As such, it makes sense to combine the Intel chips with a separate graphics card.

With Raven Ridge, however, as soon as you’re thinking of adding a separate graphics card, it makes more sense to opt for one of the other Ryzen processors without graphics.

Emphasising just what sort of system AMD sees people using the Raven Ridge chips for, the motherboard it provided for testing is a tiny mini-ITX model made by MSI. Based on the B350 chipset, the B350i Pro AC offers everything you need to complete your PC, including outputs for the processor’s built-in graphics, plus Wi-Fi and an M.2 SSD slot. Pop in the CPU, a couple of sticks of RAM and an SSD, and you’re good to go.

Due to the fact that it only makes sense to buy these processors to use their onboard graphics, we haven’t tested these chips with the addition of a separate graphics card. The only reason to consider doing that would be if you build a system now based on the built-in graphics, then look to upgrade at a later date. 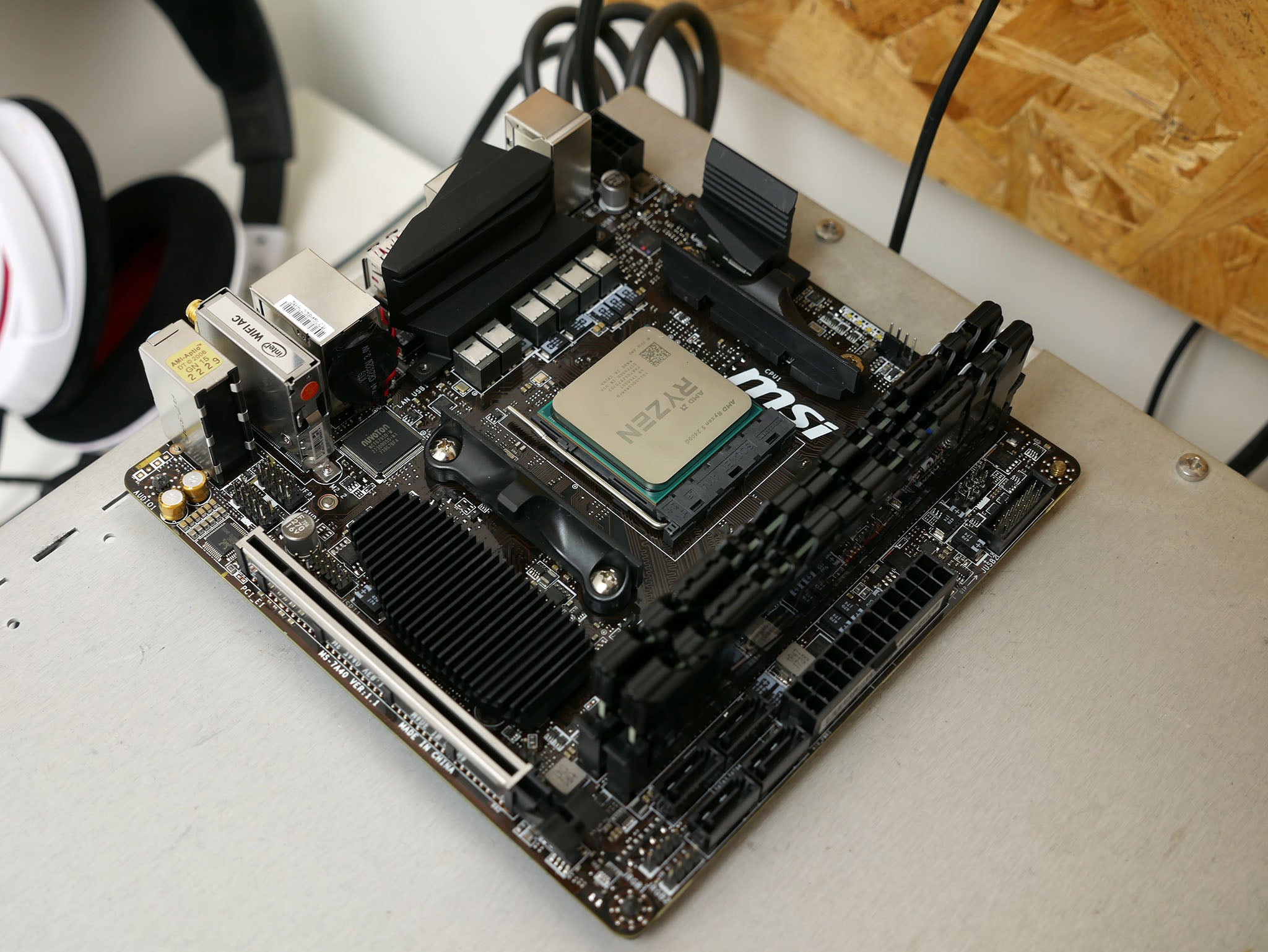 As for the benchmarks used, the first tests (Cinebench and POVray) are simply of the CPU’s raw power, which should give us an indication of where the CPU sits relative to other Ryzens and Intel’s rivals.

Next up is 3DMark to test the raw graphics processing power, and to finish things off I did some real-world gaming to see how this supposed all-in-one chip really copes. The latest Doom and The Witcher 3: Wild Hunt represent more demanding, graphically rich games, while Counter-Strike: Global Offensive represents less graphically intensive competitive online games.

Starting with raw CPU performance benchmarks, the 2400G provided exactly the sort of performance I expected. It’s basically as fast as the Ryzen 1500X and around the same speed as the Intel Core i3-8100.

As for the 2200G, again its slightly slower clock speed means it falls behind the i3-8100 in single-thread, but is nearly on par in multi-thread workloads. 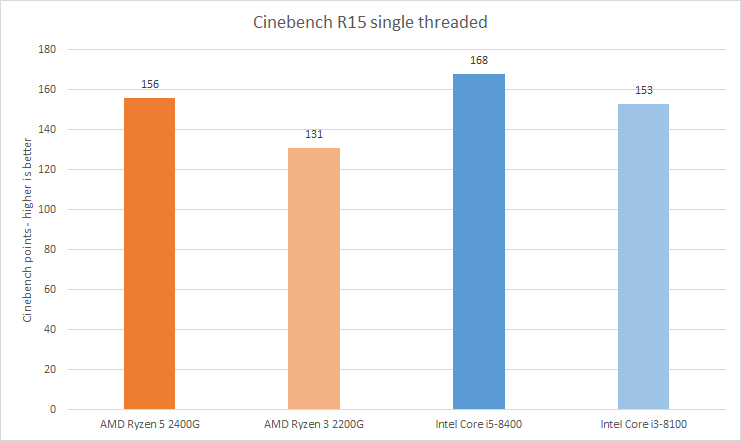 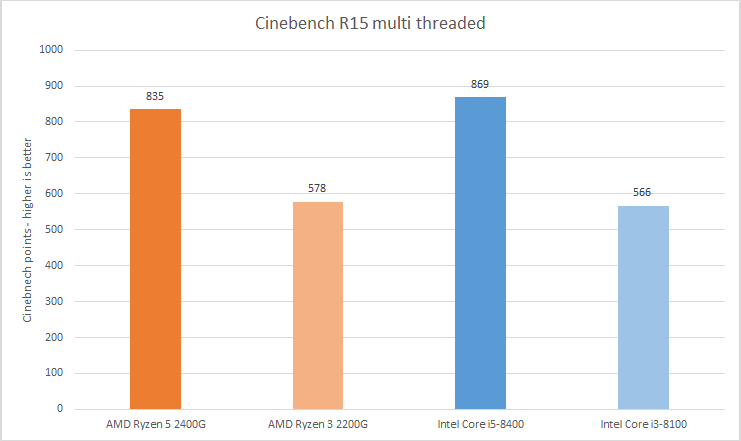 All in all, both chips clearly provide plenty enough performance for any day-to-day tasks, and are ample for gaming too. It’s just that Intel’s competing processors are a smidgen faster. 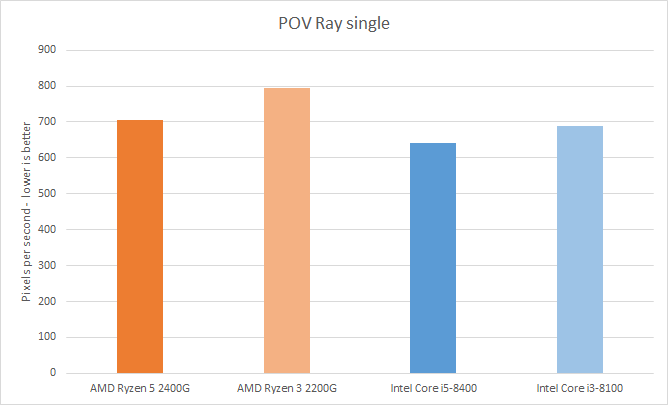 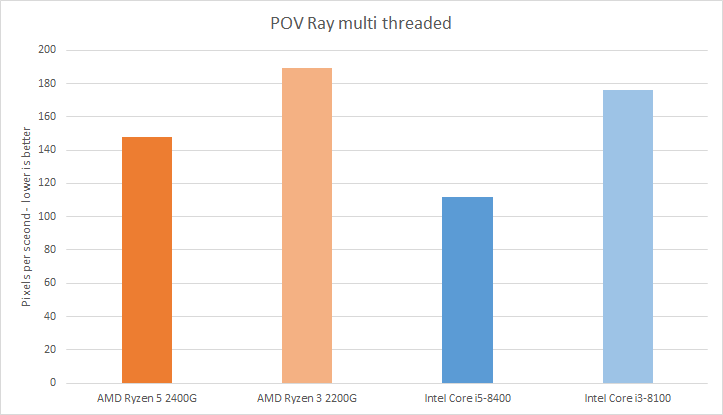 However, things are turned on their head when it comes to graphics performance. In the 3DMark Firestrike test the Intel 8100 and 8400 struggled along with just over 1100 points, while both the 2400G and 2200G managed over 2700 points. Comprehensive is the word. 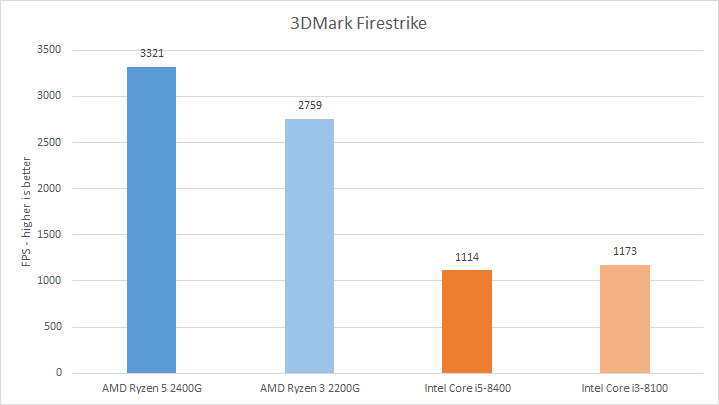 How does that translate to real-world gaming performance? Surprisingly well. In more graphically rich games such as Doom and The Witcher 3: Wild Hunt, you’ll have to scale the graphics settings down to medium, turn off any anti-aliasing and play at 900p resolution (i.e. 1600 x 900 pixels). Then you’ll be looking at a just-about-playable 35-40fps. Clearly that’s a bit limiting, but these are very demanding games. 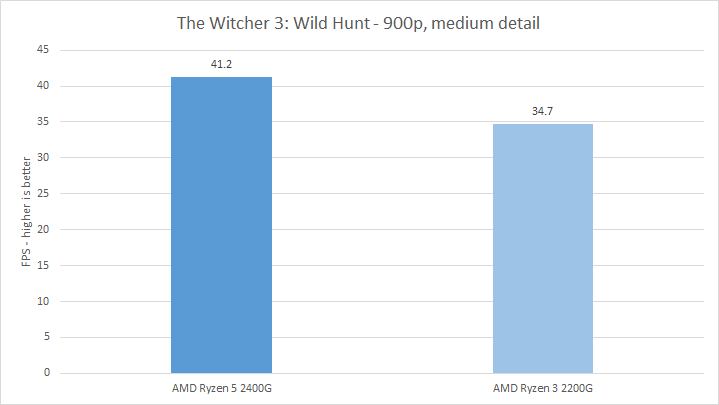 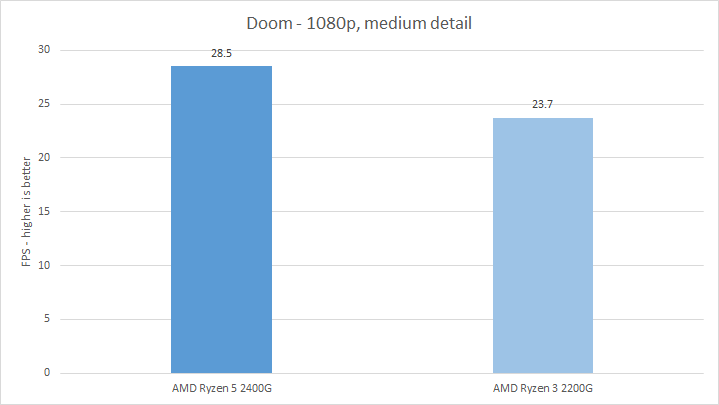 Meanwhile, for something a little more forgiving, such as Counter-Strike: Global Offensive, you can easily get over 100fps at 1080p using medium detail settings and no anti-aliasing. You do get the occasional dip in framerate, but it’s still genuinely playable. 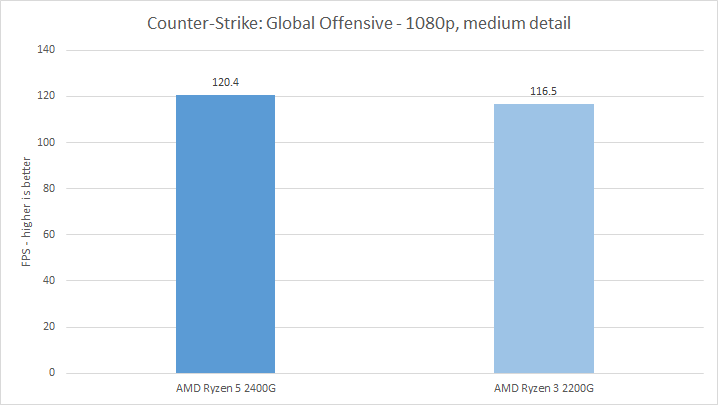 Despite the fact that AMD’s Ryzen processors are all multiplier-unlocked, most of the existing range wasn’t that great for overclocking, with most models struggling to even hit 4GHz. As such I didn’t have high expectations for the Raven Ridge processors. However, they pleasantly surprised me.

Without any extra voltage and just using the stock cooler, both chips hit 4GHz. This boost in clock speed was noticeable in performance, too. The 2200G leapt from a Cinebench score of 131 to 164.

Also worth bearing in mind is that faster memory does make a difference to the performance of these and all Ryzen chips. At a default RAM speed of 2400MHz the 2400G scored 817 in the multi-thread Cinebench test compared to 835 with 3200MHz RAM. In 3DMark Firestrike it jumped from 2885 to 3321 points.

As for power consumption, both the 2400G and 2200G are rated as having a 65W TDP, and sure enough they consume very little power. Using the 2400G, the whole test system consumed just 24W at idle and 125W with the CPU and GPU both running at full pelt. 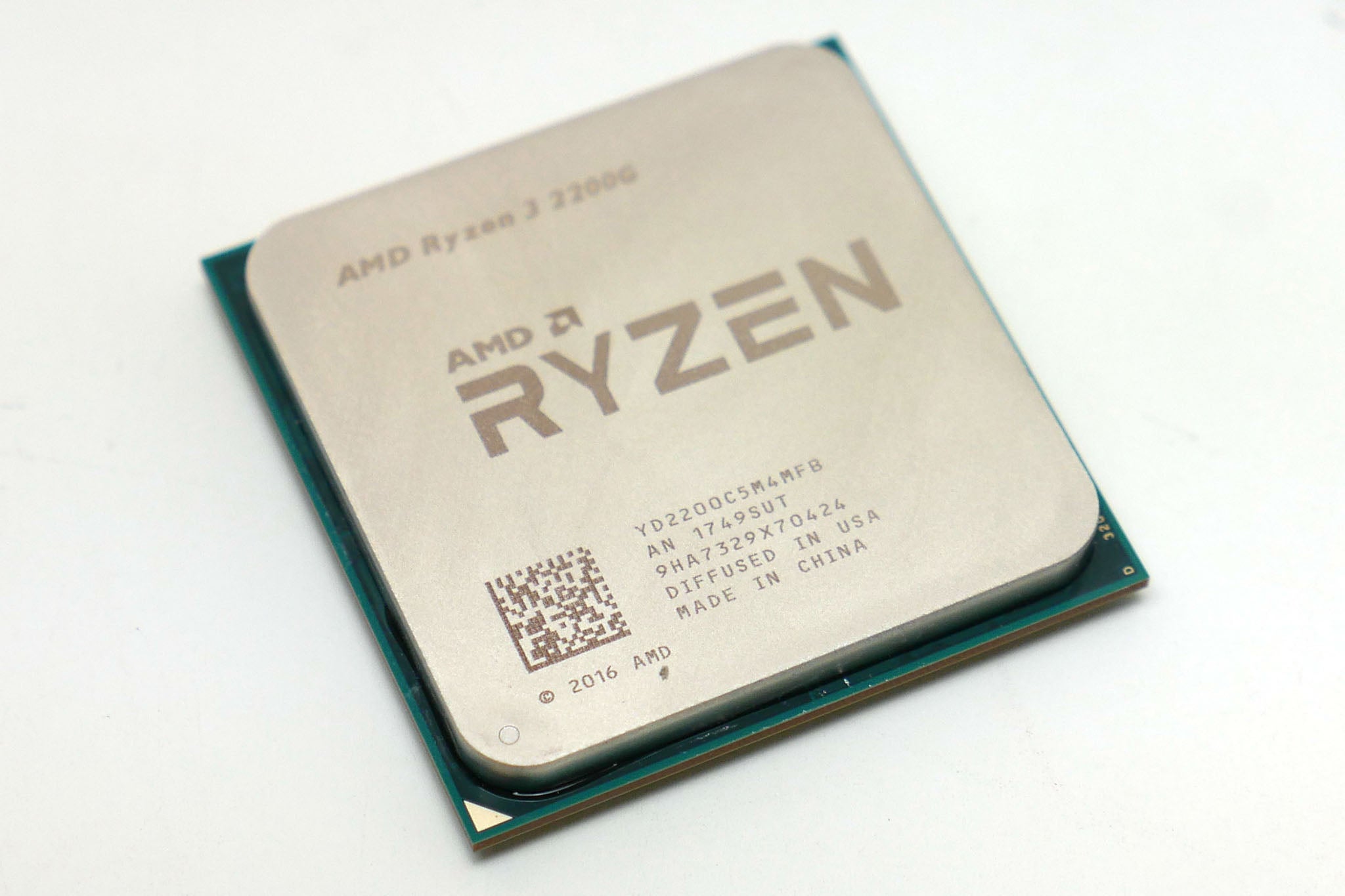 The new AMD Ryzen 2400G and 2200G processors are ideal choices for a couple of very particular segments of the PC buying/building market. If you’re looking for a really cheap or small PC, but you still want enough graphics performance for a bit of gaming, then they fit the bill perfectly.

With one chip you get CPU performance that is more than most users will ever need, plus a GPU that’s genuinely powerful enough to play games. You’ll have to compromise significantly on graphical fidelity for the very latest, most graphically rich games, but titles that are a little older or better optimised for performance will be fine.

Crucially, you get this extra graphics performance without compromising in any meaningful way in CPU performance compared to using Intel’s competing chips, while also coming in at the same price or cheaper when it comes to total system cost.

And once you’ve made that decision then it makes more sense to get one of the non-Raven Ridge Ryzen processors, if you’re on a budget, or one of Intel’s 8000-series CPUs at the higher end of the market.

The ideal processors for small-form-factor or budget gaming PCs.