What is the Kindle?

Eager to get an e-reader, but want to save some cash and so aren’t fussed about fancy additions? The budget Kindle (2016) from Amazon might be the perfect way to move on from your dusty collection of hardbacks.

Amazon’s bottom-of-the-range e-reader lacks features such a high-resolution display and the backlight that you’ll find on the Kindle Paperwhite and Kindle Voyage, but it’s still an impressive gateway into the online shopping giant’s fantastic Kindle ecosystem.

Like any device that’s been put together for the budget market, the latest Kindle can’t match its more illustrious siblings when it comes to design. But this isn’t necessarily a bad thing. In fact, there’s something about the rugged nature of this cheaper model that almost makes it better.

I worry about my Kindle Oasis when I throw it in my bag. It’s a delicate, expensive device that I don’t want to ruin. But the Kindle (2016) feels different. It’s chunky without being thick, and it feels tough. The durable plastic exterior doesn’t feel cheap, and the few occasions when I’ve dropped it already haven’t resulted in any damage. 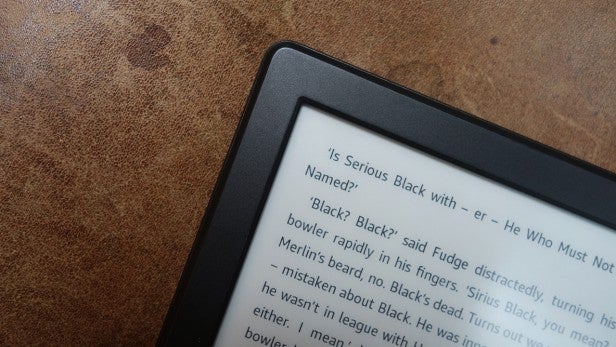 The sides are rounded, making it easy to hold, and it’s very light. It’s the lightest out of all the Kindles at a mere 161g. By comparison, the Kindle Voyage tips the scales at 181g, while the Kindle Paperwhite weighs 205g.

It’s marginally smaller that the Voyage, but it’s thicker. If you’re so inclined, you can slip it in a back pocket without too much issue.

Unlike the Oasis or Voyage, there are no physical buttons here, since all the navigation is handled via the responsive touchscreen. Personally, I prefer the feedback of some clicky buttons when I’m flicking through pages, but costs have clearly had to be cut.

And, well, that’s about it. There’s a single button on the bottom for switching the device on and a Micro USB charging port next to it. It’s about as basic as you can get, but that’s the point. This is a reading device, nothing else. 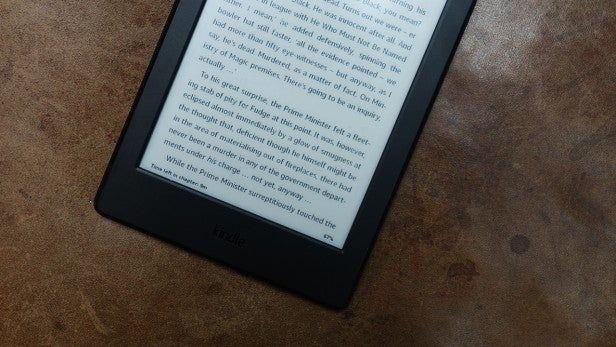 One annoyance: I’m not a fan of the in-your-face Amazon branding on the Kindle’s rear – it’s obnoxious and pointless. Older versions just had Kindle emblazoned upon them, and that was so much nicer.

Judging battery life on a Kindle is tough, because they’re all so good. These are devices that shouldn’t be charged every day or every night, but every month.

Amazon’s cagey about stating firm figures regarding exactly how much time you should get between charges, merely stating “it lasts weeks” – but don’t let that worry you. I’ve been using the Kindle (2016) for a couple of weeks now, after initially charging to 100%, and the battery indicator has depleted by little more than a quarter. I’d say you’ll get between three weeks and a month of juice with an hour or so of reading per day. 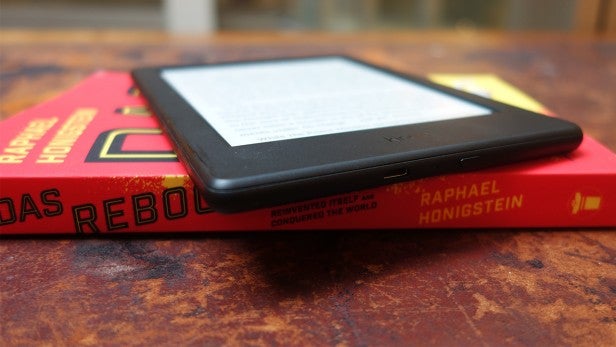 The lack of backlight helps to extend battery life further. Really, I’ve never pulled a Kindle out of my bag and found it dead. I can’t say the same for a phone or tablet.

Charging is via Micro USB, and you get a cable in the box. It doesn’t come with a mains adapter, though, so you’ll have to use the one from your phone or just plug it into a computer.

While the design and battery life aren’t that much worse than other Kindle models, the display is where the tech has been cut to achieve the low price.

The biggest omission is the lack of a backlight. This is a completely unlit e-paper display that’s just as impossible to read in the dark as a typical book. If you like to read at night, the Kindle Paperwhite is the much better option.

But we’re not at a stage yet where Amazon can offer a backlit Kindle for this price.

The other sacrifice is resolution, although this is less of an issue. The 6-inch panel has only 167ppi, as opposed to 300ppi on all the other models. That’s a dramatic drop, and looking at the Kindle (2016) and Kindle Paperwhite next to each other, the difference is instantly noticeable. 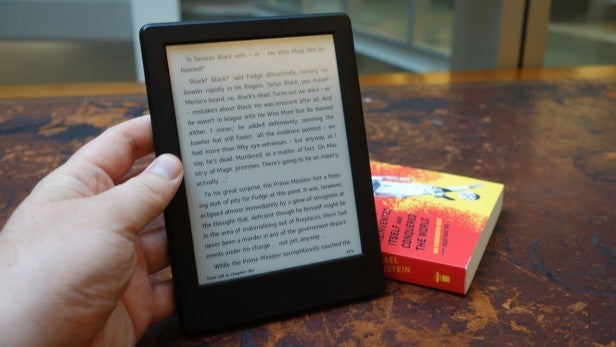 Text isn’t as crisp, and lowering the text size results in jagged edges on the typeface.

But it’s completely readable. After a while I forgot about the higher-resolution text on other Kindles and my eyes adjusted. Text is still perfectly readable and you won’t find yourself squinting.

The screen is touch-enabled, and all the navigation is done via the panel. It’s fast and responsive, in some cases flicking to the next page quicker than my Kindle Voyage. I’ll simply put that down to it being much newer, though.

If you’re looking for a portable device for watching videos, then a Kindle isn’t for you. You’re better off taking a look at our round-up of the best cheap tablets. The anti-reflective screen is best for reading, and unlike LCD screens it works in direct sunlight.

Kindle – Other Things to Consider

The great thing – or worst, depending on your feelings – about the Kindle is that, in terms of software, all the models are exactly the same.

Whether you pick up this budget Kindle (2016) or spend more on a Paperwhite or Oasis, the overall look and functionality of the software remains the same.

Updated earlier in 2016, the Kindle homescreen is about as functional as it’s ever been. You get a quick glance at the books you’re currently reading, suggested reads at the bottom, integration to Goodreads, and quick access to the fantastic Kindle Store. There’s a handy search box, too, which not only finds content that you’ve already downloaded but searches across the whole book store.

Amazon’s huge e-book library is the single biggest reason to pick up a Kindle over a Kobo or Nook. It isn’t just the book selection, but the extras, too.

Kindle Singles are short reads that cost less than a quid, while Prime members receive access to the Lending Library and the ability to borrow a book a month. There’s also Kindle Unlimited, which is sort of like a Netflix for books, costing £7.99 a month for unlimited access to a bunch of books. It has a decent selection, but it’s packed with more indie authors than bestsellers. 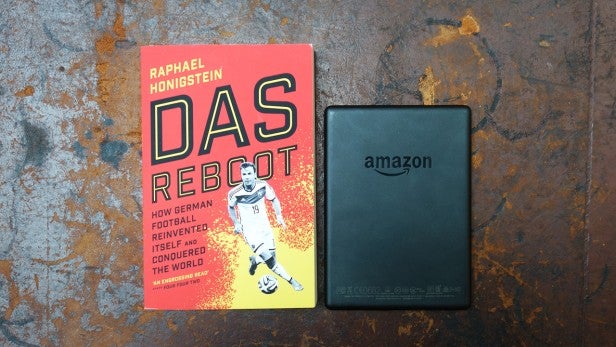 You can pick up this Kindle (2016) in either black or white, although stock of the lighter model seems to fluctuate far more than its darker sibling. My review unit is black and it’s my colour preference, since it’s less prone to picking up dirty marks over time.

There’s 4GB of onboard storage, which is plenty for books that are mere kilobytes in size, but there’s still no audio output or audiobook listening supported.

Like most Kindles, the cheapest version (£59.99) comes with lockscreen ads. To be honest, these aren’t that intrusive, but you can pay a tenner to have them removed.

Should I buy the Kindle?

The latest budget Kindle is the perfect entry to e-reading. It’s cheap, durable and features the same software as the pricier Amazon offerings. For £59.99, there isn’t a better ebook reader on the market.

I’d still say the Amazon Paperwhite (£109.99) is the best all-round e-reader, and if you’re really into your books then this is the better choice. It has the backlight for night reading and a crisper screen.

However, if you simply want something to chuck in your bag for a morning commute or holiday by the pool and don’t want to splash out, you can’t go wrong with the Kindle (2016).