Significantly cheaper than its big brother but with most of the same features, the Amazon Echo Show 8 strikes the perfect balance between price and size. A bright and sharp display and excellent audio make this smart display a perfect allrounder. You miss out on the Zigbee hub of the larger display, but realistically this is a feature that most people won't miss.

If you think the 10.1-inch Echo Show 2nd Gen is a bit big and the Echo Show 5 is a bit small, you’ll be happy to know that there’s now the Amazon Echo Show 8 to sit nicely in the middle. In fact, it fills the niche vacated by the original 7-inch Echo Show.

Size aside, the Echo Show 8 has many of the qualities that make its big brother such a great smart speaker, only a price that’s far closer to the Echo Show 5. So, you miss out on the Zigbee hub that the bigger Show has, but for most people, that’s not a problem, and this is the best smart display that Amazon makes.

The Echo Show 8 looks like its big brother but smaller (200 x 136 x 99mm). It has the same wedge-shaped body, decked out in a material finish: there are charcoal (black) and sandstone (white) options. It’s a neat and mature design that still looks good and creates a family feel to the Show range.

Look carefully and you can see that the Echo Show 8 has the same button layout as the Echo Show 5. On top you get a microphone mute button, volume controls and a webcam slider that puts a physical shutter in front of the 1-megapixel camera (the larger Echo lets you turn the camera off but doesn’t have a shutter). 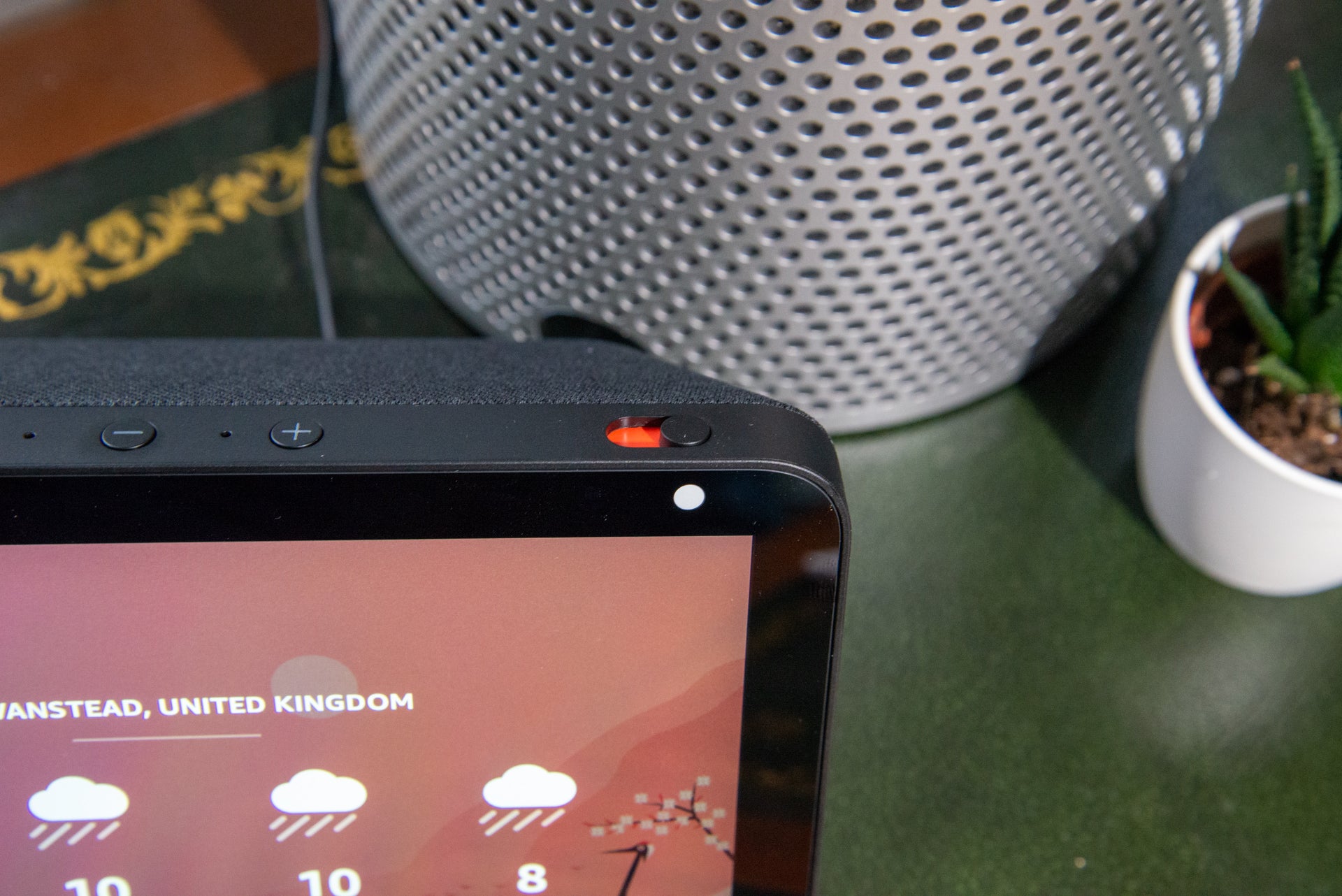 There’s a shutter to block the webcam’s view

Around the back, there’s a 3.5mm audio output so that you can hook the Echo Show 8 up to a set of external speakers. From the front, it’s business as usual, with the 8-inch touch screen taking up the entire front, bar a thin bezel around the side. 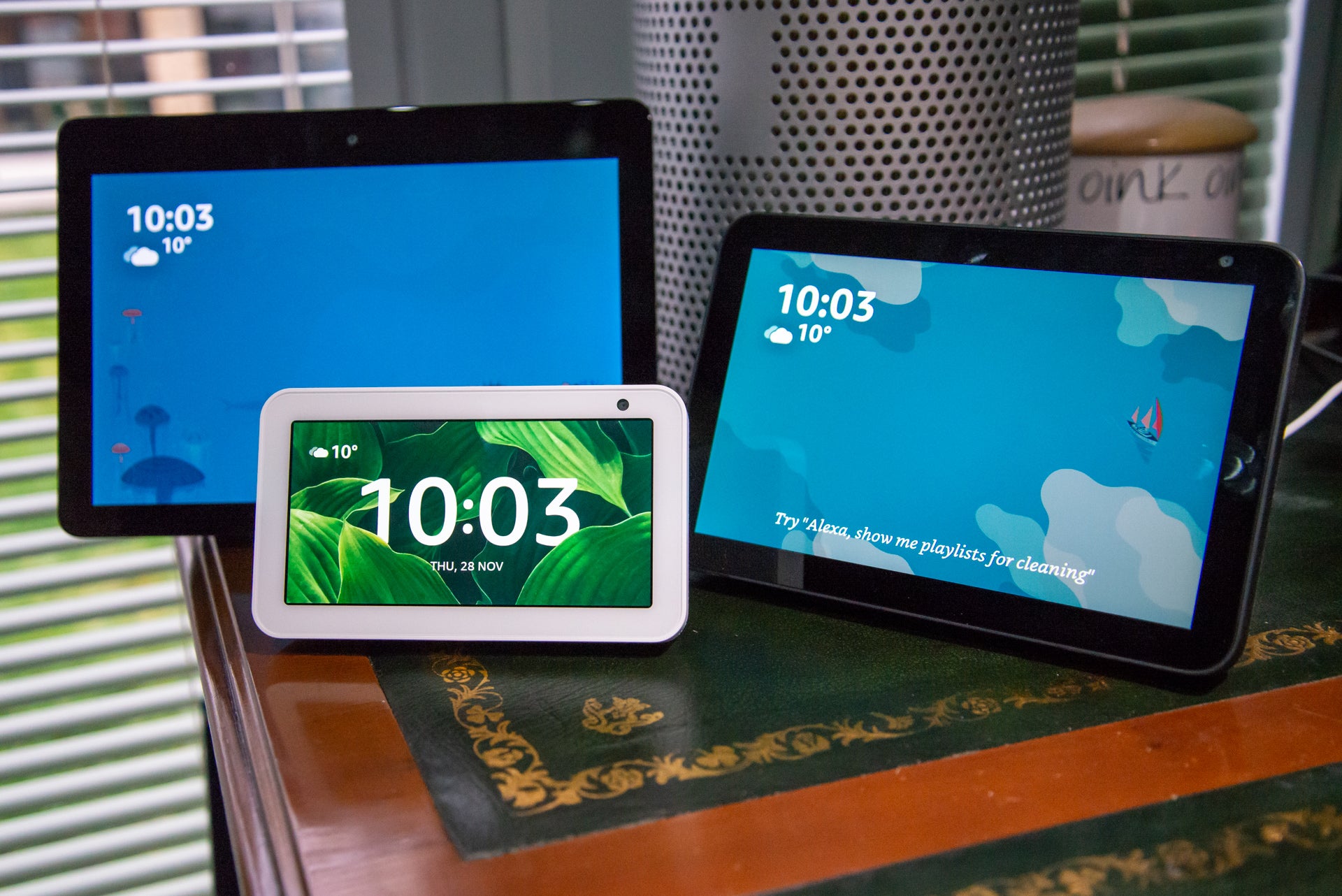 Take your pick, do you want a big, medium or small smart display?

You get all of the same controls on the Amazon Echo Show 8 as you get the other devices in the range. Introduced with the Echo Show 5, the 8 maintains the same Dashboard, which you can get to by swiping from the right of the screen.

This gives you big cards with Alexa suggestions, such as “What alarms are set for tomorrow?” and “Show the weather forecast”. You can tap any card to see the results. There are also shortcuts to common features. 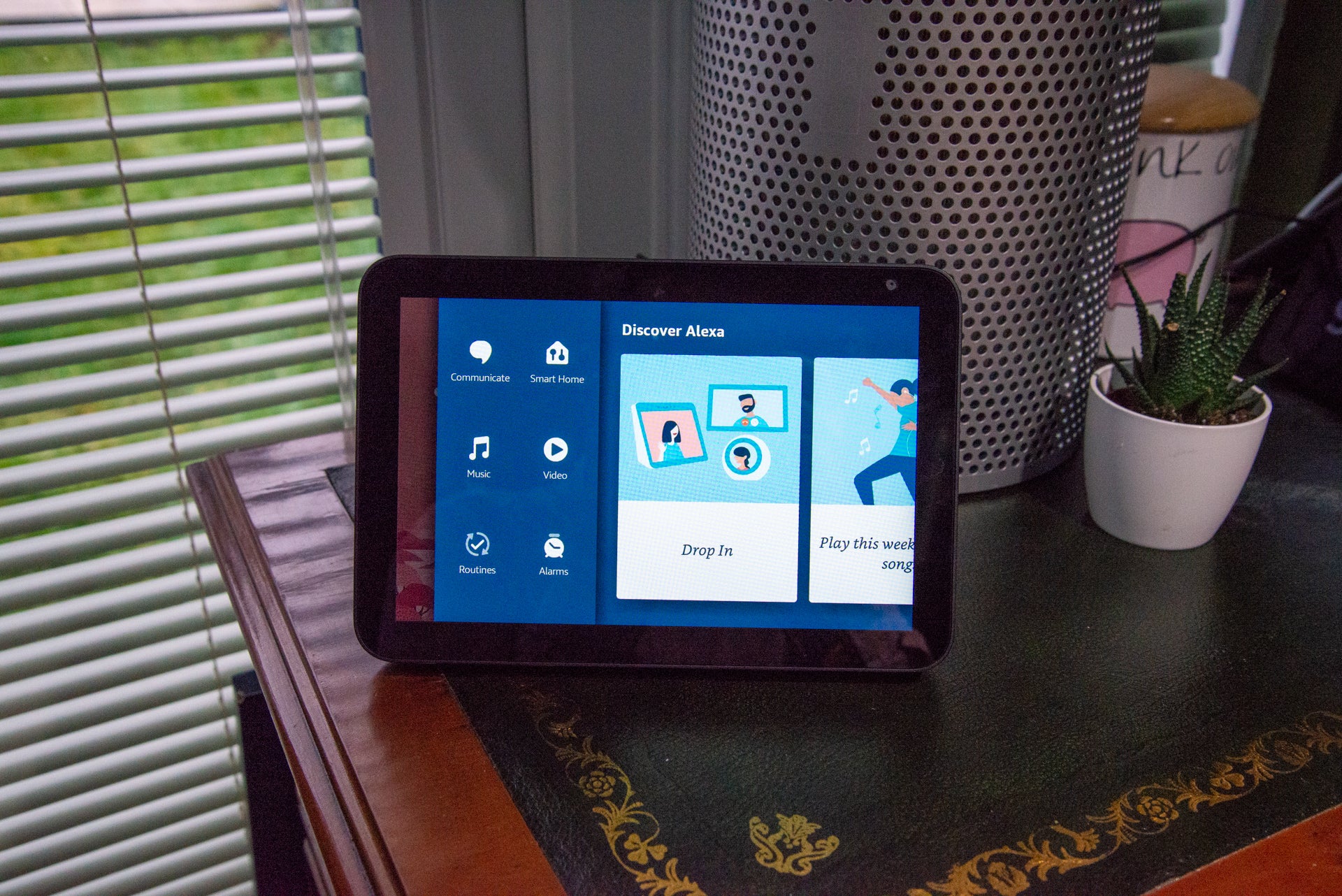 Tap Music and you’ll see recently played music from your chosen services. I had a problem as the Echo Show 8 showed me a recent Spotify list, but couldn’t play the music as the service wasn’t connected, apparently. I think this was because I used the cast option from the Spotify app, rather than starting playback from the Echo Show.

From the Video icon you can launch Amazon Prime Video or Netflix. There are shortcuts to categories, but the Echo Show really misses having a search feature with an onscreen keyboard. As it stands, you have to use voice search to find anything to watch, although you can now tap the ‘…’ icon next to a TV show to view all available episodes.

Communication lets you use the touchscreen to make voice calls (there’s even a neat onscreen dialler), use drop-in or make an Echo Announcement. With the webcam, you can make video calls to other Echo Show devices. The 1-megapixel camera resolution isn’t as good as on the Echo Show, which has a 5-megapixel camera, but you’ll only care if you make a lot of video calls. 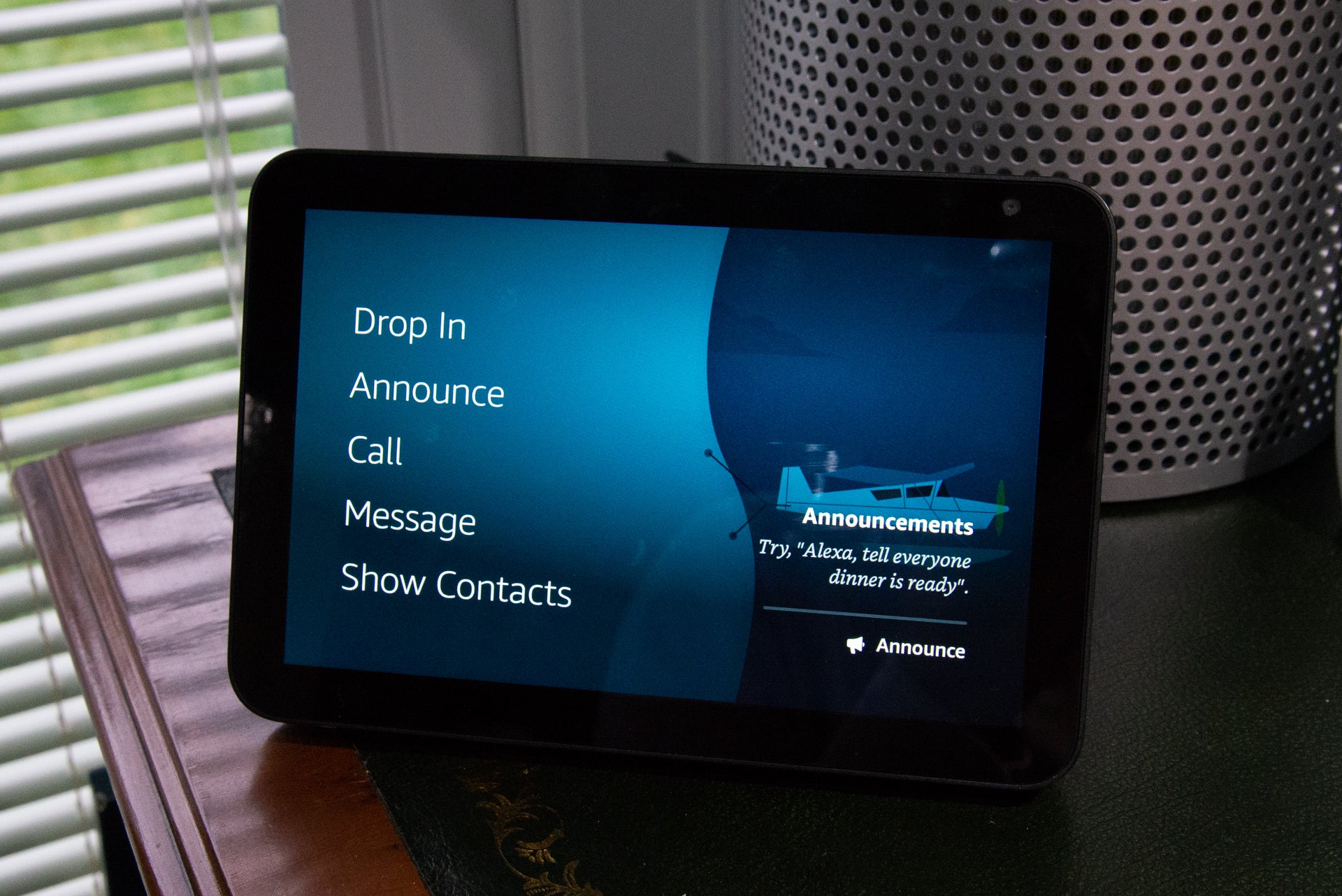 The Smart Home control is really neat. It defaults to showing you recently controlled devices, but you can browse by Group or scroll through all devices. You can then control your devices with a tap, say turning off all Philips Hue lights in a room.

The level of control differs by device and there are some limitations. For example, select a Hue bulb and you can adjust the brightness but not the colour. That’s slightly more restrictive control than on the Google Nest Hub. 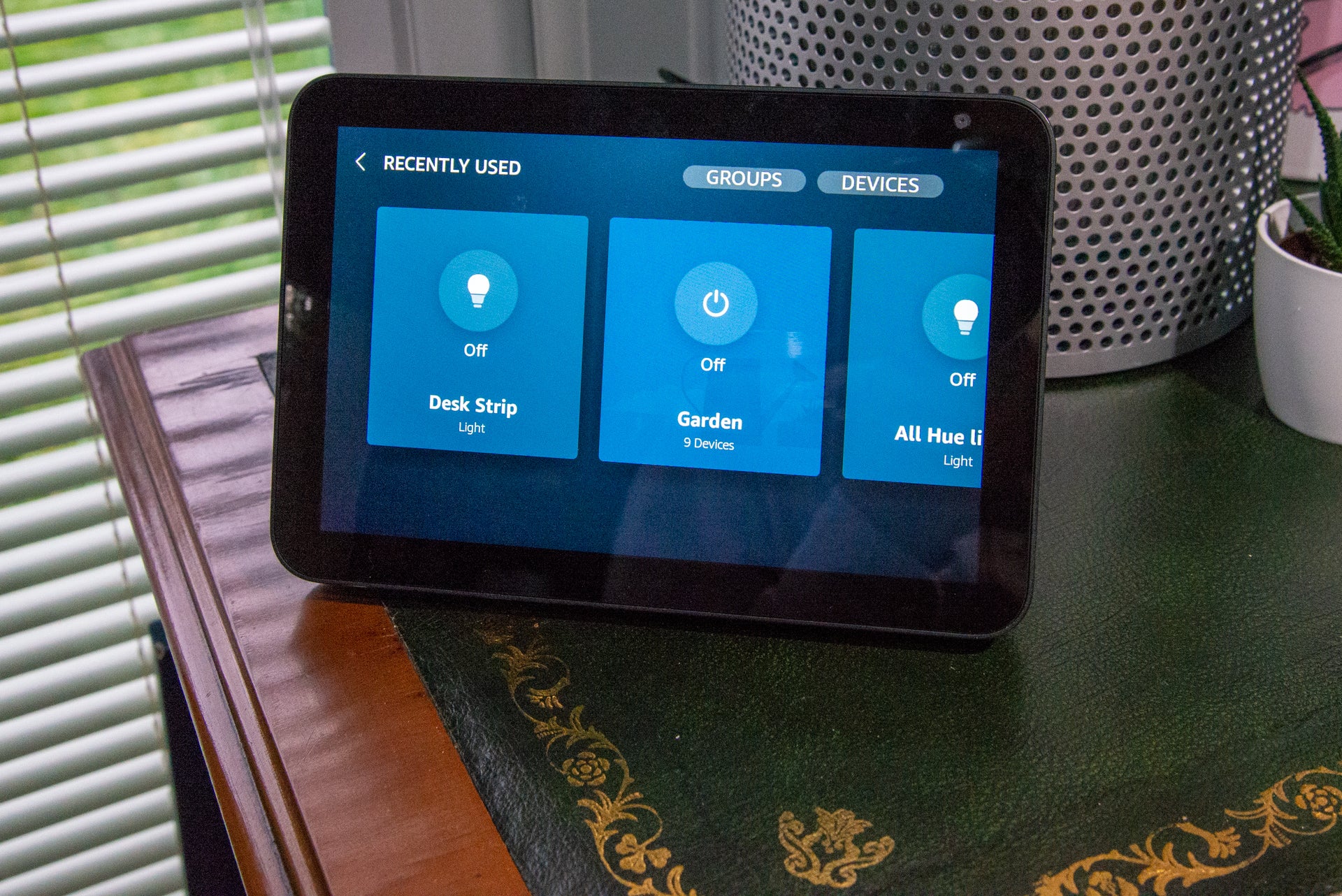 You can quickly control smart devices, although you don’t always get full control

If you use your voice to change a device, the same on-screen controls pop up to let you finetune the command, say turning on a light using a command and then the touchscreen to set the brightness that you want. Alexa Routines can be run through the shortcut, too, which is a neat way to control multiple devices in one go.

There’s no Zigbee hub in this device, so you can’t connect some smart devices directly to it. However, this is getting to be less of an issue, as connecting devices to Alexa, the regular way using Skills still gives you a lot of control. For example, you can use a Hue motion sensor to trigger an Alexa routine. If you do need to connect devices directly, the latest Hue light bulbs use Bluetooth, so you don’t need to have Zigbee. In short, you’re unlikely to miss Zigbee.

Of course, you still control everything with your voice using Alexa. My full Amazon Alexa Guide goes into more detail on the smart assistant, plus it’s regularly updated with the latest information. The benefit of Alexa with a display is that the screen can be used to show additional information, such as the weather forecast for the week.

With its 1280 x 800 resolution, the Echo Show 8’s screen is the same resolution as the larger Echo Show 2nd Gen, only it looks a bit sharper here. Viewing angles are excellent and colours vibrant. There’s enough detail and quality here to watch Amazon Prime Video, and it can be a neat way of catching up on a TV show while you’re working or sat at a desk.

You can view YouTube videos, although you have to open the very slow web browser first, which makes it fiddly to do. It’s a shame, as YouTube has lots of instructional videos that the Google Nest Hub and other Google Assistant Smart Displays make it easy to view. I’d also like to see Amazon provide Netflix support.

If you’ve got a Ring Video Doorbell, the Echo Show 8 is a good companion, letting you answer your door and see who you’re speaking to.

As with the Echo Show 5, there’s a nighttime mode for the screen, with the display using the ambient light sensor to drop the brightness at nighttime. The screen goes dark enough to sleep with, although if you’re after a device for the bedroom, the smaller Echo Show 5 is far more friendly for bedside tables. 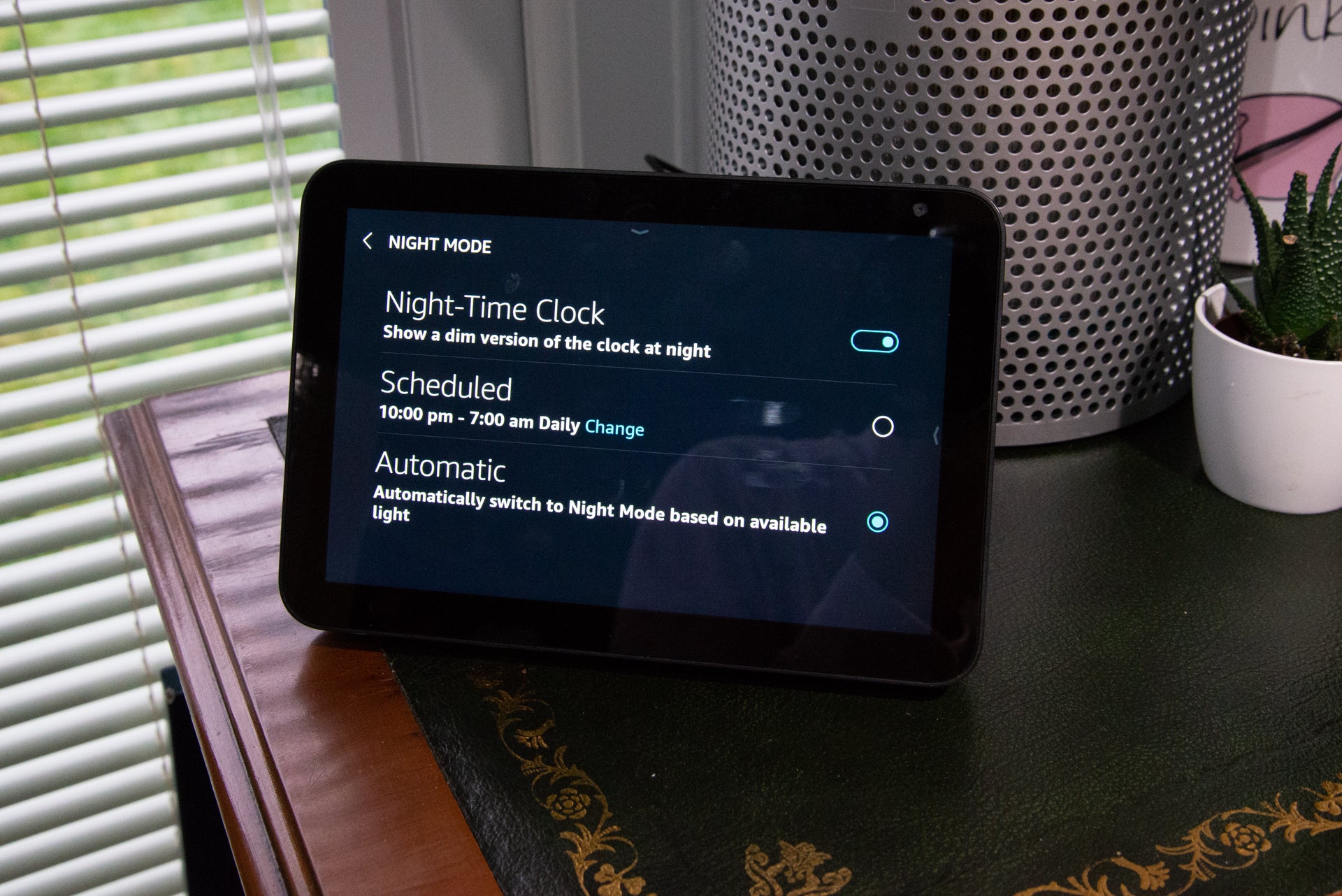 You can schedule the Do Not Disturb mode to prevent notifications from waking you up, and you can even turn the screen off by saying, “Alexa turn off screen”.

One of the things that I loved about the Echo Show was its powerful audio, and the Echo Show 8 doesn’t let the side down. This model has two 2-inch drivers with 10W per channel, with a passive bass radiator.

The result is sound that’s almost as good on this device as it is on the top-end Echo Show. There’s a bit more distortion at high volumes on this model and the clarity isn’t quite as good, but it’s a close-run thing. What the Echo Show 8 has is a lot of presence and enough bass to add that thump and excitement to music or films.

If you want to take things further, you can pair an Echo Sub, although this bass speaker doesn’t currently work with video sources, so it’s only worth adding if you’re going to primarily use the Echo Show 8 for music.

There’s a 3.5mm audio output, although using a set of external speakers doesn’t seem particularly worth it to me. 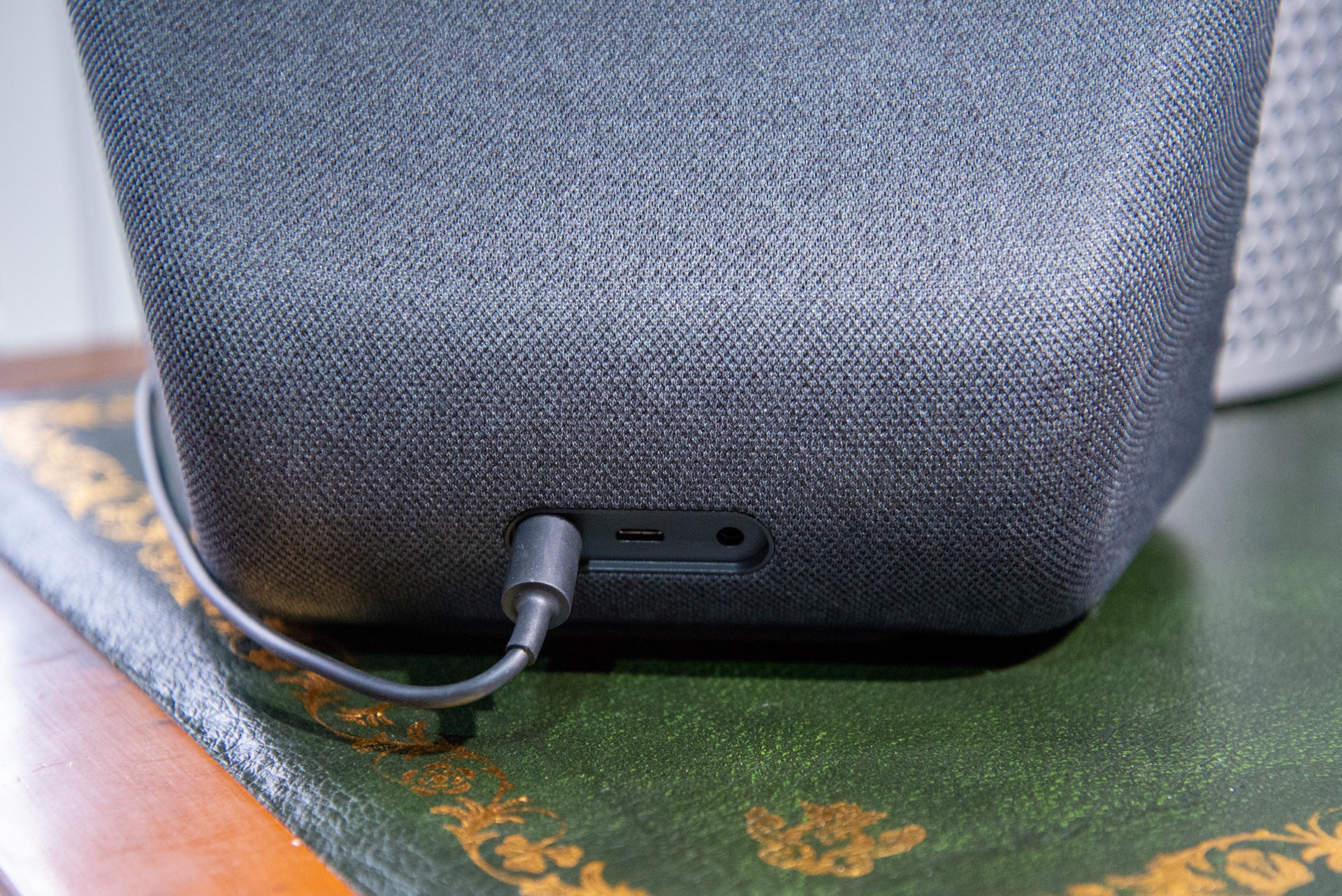 A smaller screen means a smaller price compared to the Echo Show 10, making this a better budget alternative.

With the display showing you camera feeds (or letting you answer your Ring doorbell) plus touchscreen controls, this Echo show adds something over smart speakers

Decent music and a just-big-enough screen mean you get all of the Echo Show range’s best features in a smaller package.

In many ways the Echo Show 8 sits awkwardly in the middle of the range: the Show 10 is a better display all-round, and the Show 5 a better bedside companion. 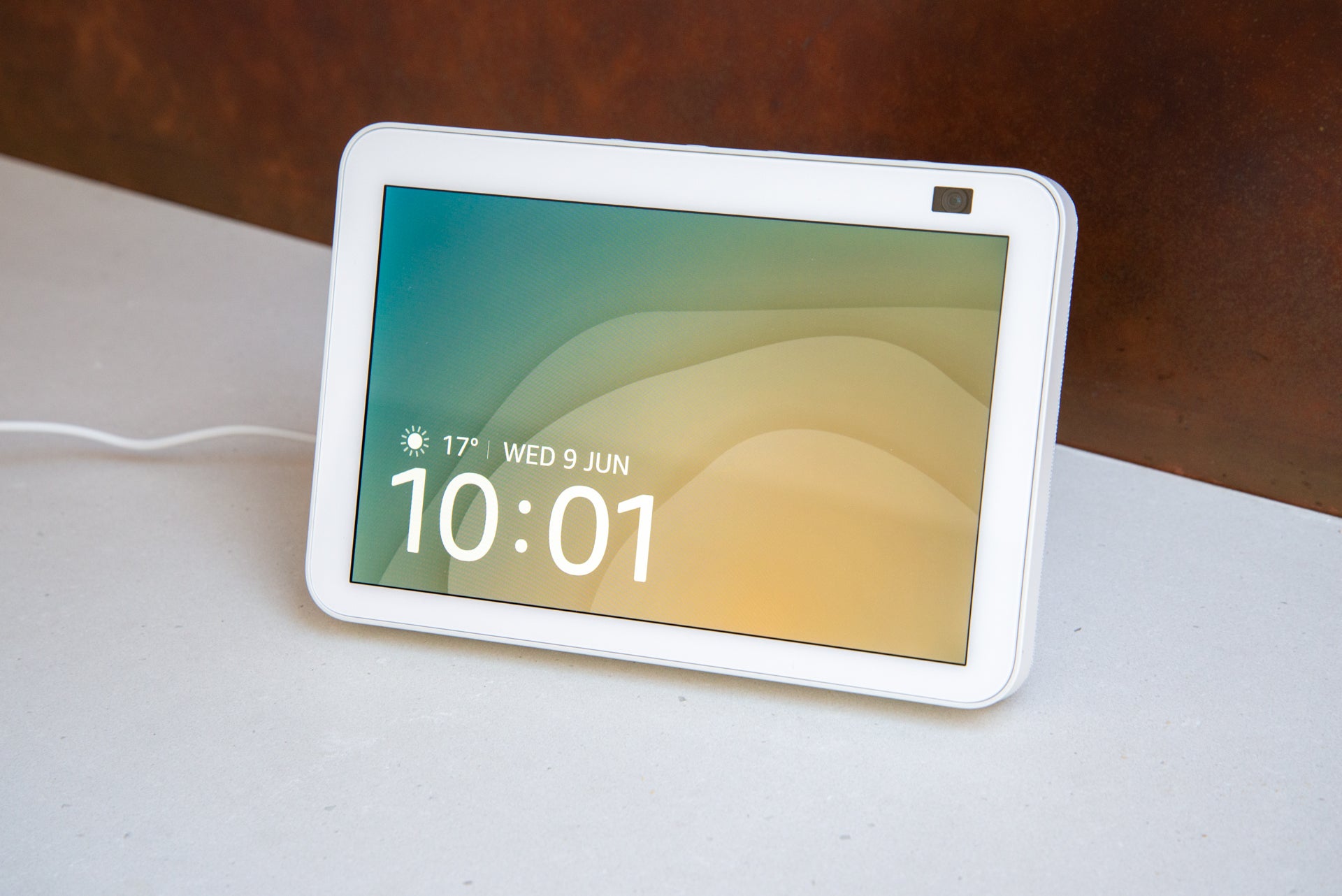 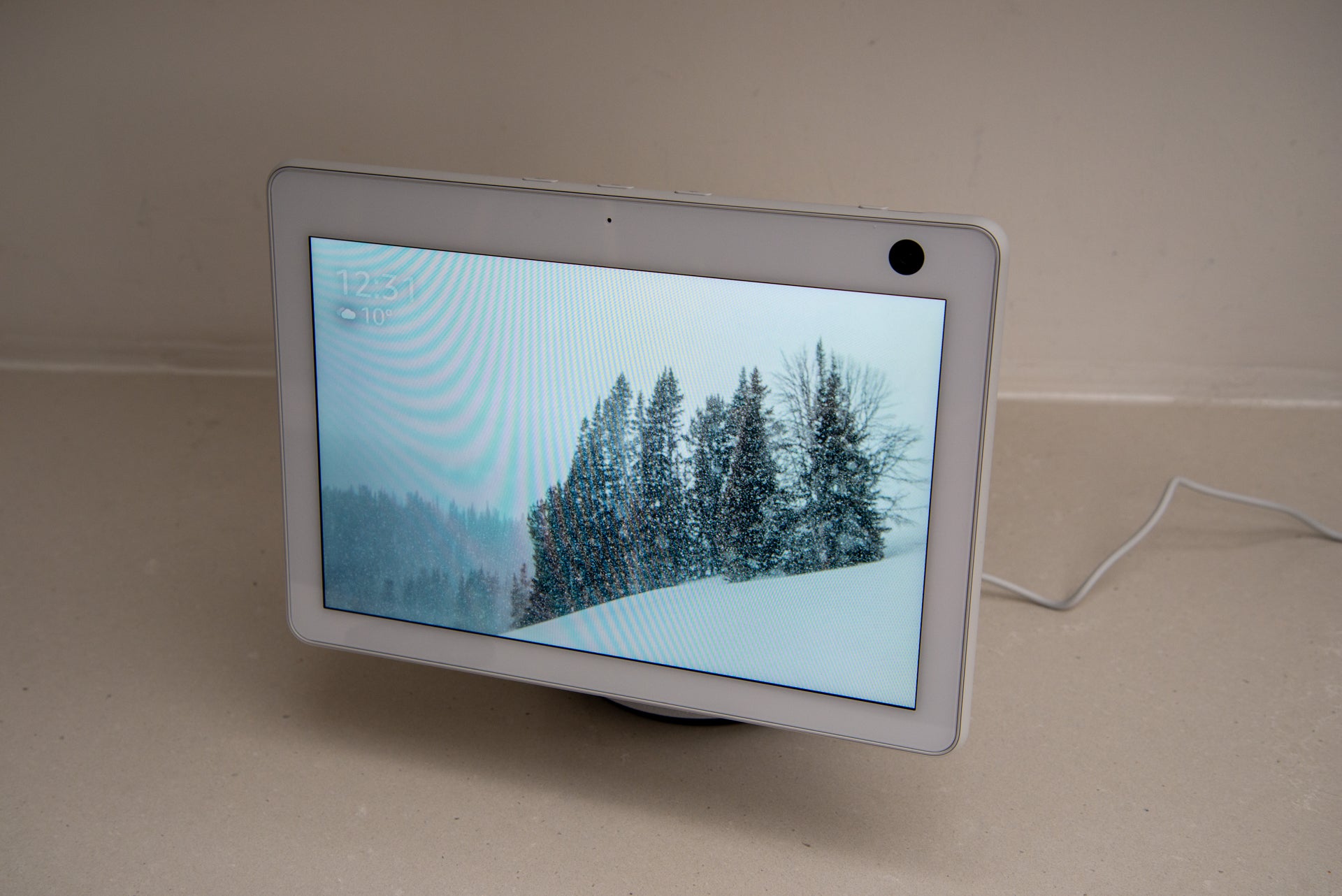 Can you watch Netflix on the Amazon Echo Show 8?

Yes you can, along with Amazon Prime Video.

Can you watch YouTube on the Amazon Echo Show 8?

Yes you can, although you have to open the web browser first.

Can you link the Amazon Echo Show 8 to a Ring Doorbell?

Yes you can, and you can answer your door and see who’s there