Alienware’s website only lists the GPU as a generic Nvidia unit. A big of legwork reveals that the Alpha’s silicon is based on the desktop GTX 750 Ti/GTX 860M chip – the same chip used in Syber’s system.

It’s a mid-range part with 640 stream processors clocked to 1,020MHz – a configuration with a top theoretical throughput of about 1.4TFLOPS, which is less than the 1.84TFLOP peak of the PS4, but higher than the 1.31TFLOP maximum of the Xbox One.

The memory configuration makes the situation murkier. The graphics card has 2GB of dedicated memory, and our machine’s 4GB of DDR3 is installed in single-channel mode that will hamper speed – so its 6GB looks bad when compared to the 8GB of shared memory in each console. The Syber, too, had 8GB in tow. 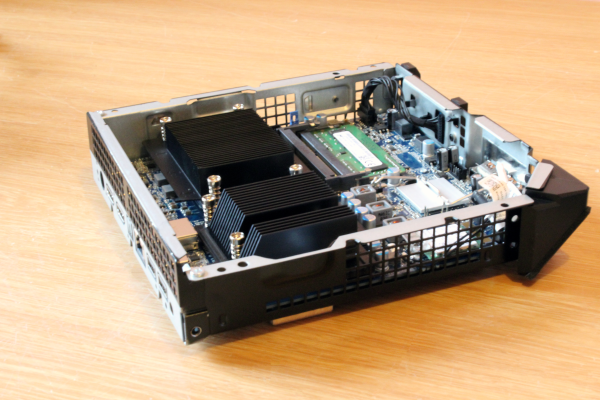 The Alpha’s mid-range graphics core is partnered with an Intel Core i3-4130T. It uses Haswell, but it’s a low-power chip that tops out at 2.9GHz with no Turbo Boost. Syber’s machine also uses Core i3, but its i3-4160 is a full-fat part clocked to 3.6GHz.

The Alienware’s lesser processor and smaller RAM loadout made a difference in games tests. In Battlefield 4 at Ultra quality and 1080p the Alpha’s 27fps average was three frames behind the Syber, and the Alpha’s 44fps average in Bioshock’s top settings was four frames slower. That pattern was repeated in Crysis 3 – the Alpha managed 28fps, with the Syber coming in one frame quicker.

We got the Alpha running smoothly by dropping games down one quality level. With Battlefield 4 running at High settings its average jumped to 41fps, and in Bioshock it improved to 62fps. In Crysis 3 the Alpha improved to 33fps. Minimum framerates are important, and the Alpha performed well here – its Battlefield minimum result jumped from 22fps to 32fps, and it rose beyond 30fps in Bioshock. 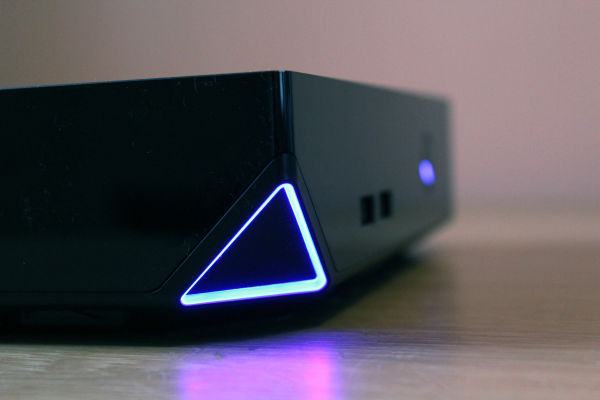 The Syber console is a little faster, but the Alpha still has enough gaming punch to make an impact. It’s able to play all of our test titles at their High quality levels and 1080p, which is the performance we expect from the current consoles. It’s ample power for gaming in the living room, and it’s more than we expect from a machine that costs just £449.

The low-power processor and lesser memory also impacted on applications. In the PC Mark 7 and Geekbench tests the Alienware scored 3,220 and 5,687 points – but the Syber hit 3,994 and 6,961 in the same tests. The Alpha’s processor is more suited to light work tasks, web browsing and general computing rather than intensive work, but that’s all we expect from a small, cheap system, and it’s worth noting that applications never struggled once they’d booted.

The 500GB hard disk is half as big as the Syber’s drive, and that’s not the only department where it falls behind. The 5,400rpm disk is sluggish: its sequential read and write speeds of 105MB/s and 100MB/s aren’t as good as the 155MB/s and 128MB/s speeds we recorded from the Syber’s disk. The Alienware’s slow loading times are obvious, and the Alpha took 36s to boot into its custom UI – a poor figure by both PC and console standards.

We expect small systems with decent components to prove loud and hot, but the Alienware bucked the trend. The processor and graphics core’s top temperatures of 71 and 79 degrees are both lower than the Syber. The Alienware was quieter, with only a modest, flat rumble emerging during tough gameplay spots – a better performance than the louder, inconsistent Vapor.

The Alpha’s noise is comparable to the consoles, and its power consumption improved on rivals. When idling the Alienware required just 22W, and it hit a peak of 101W – about 10W less than the Xbox One, and around 25W less than the PS4.

Four different Alpha configurations are available. Our £449 sample is the cheapest, and stepping up to a £499 model doubles the memory and hard disk space – so you get 8GB and 1TB respectively. The next specification costs £569 and has the larger hard disk and memory allocations alongside a more capable Core i5 processor. The most expensive most costs £699 and comes with a Core i7 processor and 2TB hard disk.

In the past we’ve found Alienware desktops too expensive, and have advised experienced users to consider building their own rigs, but that’s not the case with the Alpha. It’s barely possible to replicate this specification without spending more money, and a home-made machine won’t have several of the Alpha’s advantages: mini-ITX cases aren’t usually this small or smart, you won’t get the Alpha UI software, you’ll need to buy a control pad and you don’t get Alienware’s warranty.

The various Alpha specifications are surprisingly good value when stacked up against the consoles, too, particularly when you consider they’re built at a loss. The better-specified models offer far more computing power than the PS4 or Xbox One, and the inclusion of Windows 8.1 means the Alpha is more versatile – when you’re not gaming it could be used for work or daily computing. The higher initial outlays are also eroded by games purchases, which are almost always cheaper on PC. The £569 version feels like the sweetspot of the range, though we’d be tempted to upgrade to an SSD due to the rather slow 5,400rpm hard drive included.

It’s worth noting you can buy the Alpha on Amazon for slightly less than Alienware’s listed prices. 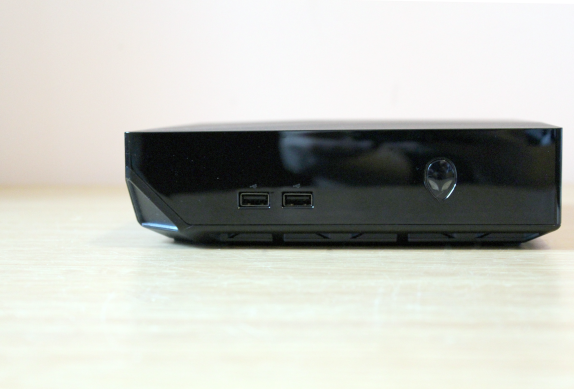 Should I Buy the Alienware Alpha?

It’s the best small-form-factor gaming PC we’ve seen for some time, so it’s worth seriously considering if you want a gaming PC for the living room. Its GPU matches consoles for power and offers more gaming grunt than we’ve ever seen in a desktop that costs £449 – just the right amount of power for living-room gaming. The processor isn’t particularly fast but, again, it’s enough for gaming, light work and web browsing.

The Alpha fights its battles on two fronts, and convincingly stands up to PCs and consoles. It’s cheaper and smaller than the Syber Vapor I while only giving up a little performance, and it’s no more expensive than building your own small-form-factor system. Its interior access and Windows 8.1 software make it more versatile than a console, and its higher initial price can be countered by consistently cheaper PC games.

What holds it back is the rather slow hard disk and that the software clearly isn’t as slick as on the proper consoles – an upgrade to 8GB RAM and an SSD is worthwhile if you can manage it. But we can’t think of anything that offers what the Alienware Alpha does and that’s an achievement worth commending.

The Alpha is the best example of a living-room gaming system we’ve seen yet. It still entails some compromises, but if you can live with those then it’s worth serious consideration.