What is the Syber Vapor I?

The gap between consoles and PCs has blurred thanks to efficient components and smaller, sleeker designs, and it’s now viable to opt for a desktop in the living room – they’re able to access a larger library of games and, unlike consoles, they’re fully upgradable.

CyberPower has long made high-end gaming desktops, but its new Syber division represents its first big play into the living room: a move that sees this underdog step up against the Playstation 4 and Xbox One as well as established systems like the Alienware X51. 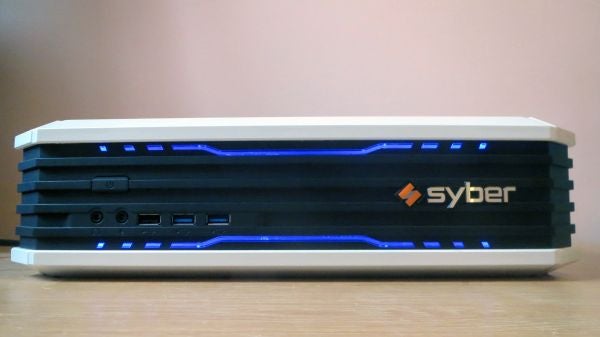 The Vapor is more distinctive than the consoles it hopes to replace. Its body is a mix of white and black plastic, and it has the kind of dramatic styling that seems mandatory in gaming hardware. The sides are covered in angles and vents, and the middle section is slatted.

The front is distinctive, with two bands of light either side of the futuristic Syber logo. Our sample is white with black trim and blue lights, but the machine is available in pure black, and black with copper trim. The lights can be altered, with illumination available in purple, yellow, green and red.

The Vapor has one big advantage over the consoles: it’s fully upgradeable. Syber encourages owners to get stuck in, which means obsolete components can be replaced – something that adds more cost, but an option that could also give this machine a longer lifespan than any console. 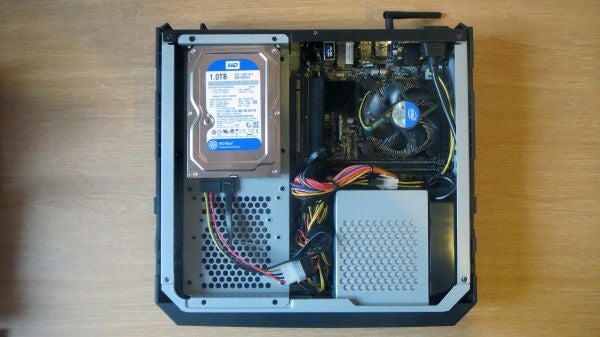 Getting inside is simple: remove one screw, and the side panel slides away. Once the Vapor is opened, the processor, Wi-Fi card and memory sticks are all easy to access, and the hard disk can be unscrewed from a metal caddy that spans the width of the system.

The graphics card is beneath the hard disk caddy and is attached to the motherboard with a PCI riser, and it’s easy to remove. There’s room for larger cards than the GTX 750 Ti used here – as long as the card is 280mm or less in length, it’ll fit.

The Vapor looks like a console, but it’ll occupy more room beneath a TV. The Syber is 358mm wide and 344mm from front to back, and it weighs 5.5kg – about the same size as the Alienware X51. Compare that to the consoles: the PS4 weighs just 2.8kg and is 275mm wide, while the Xbox One tips the scales at 3.2kg and it’s 333mm wide.

It’s bulkier than consoles, but there’s no denying the Syber’s strength. It’s a sturdy box with few real build quality problems – the side panels have a little wobble, but that’s not a problem when the system is sat beneath the TV.

Syber Vapor I – Connectivity and Software

The front panel has two USB 3.0 ports, a USB 2.0 connector and a pair of audio jacks, and the rear has two more USB 3.0 connections, four USB 2.0 ports, and a PS/2 plug. There are three more audio jacks, but one feature – an optical drive – is absent. 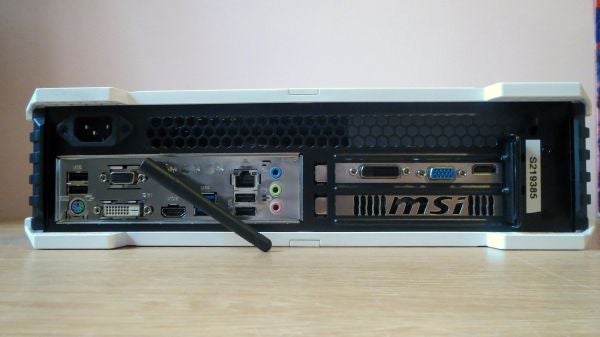 On the inside, there’s Gigabit Ethernet and 802.11n wireless, but no 802.11ac connectivity, despite what Syber’s website says.

The lack of an optical drive could grate if you want to play legacy games, but that’s not how Syber sees its system being used. The Vapor boots into Steam’s Big Picture mode, which optimises the UI of Valve’s PC gaming software for sofa use – the app’s icons are bigger and its navigation is reworked for controllers. It’s a tempting proposition, as it means the PC’s mighty software library can be more easily accessed from the living room.

Syber pairs this lounge-friendly software with a couple of peripherals. The first, Logitech’s F710 wireless controller, is good: a comfortable and sturdy facsimile of the pads supplied with the major consoles. The second peripheral is a tiny keyboard with a small touchpad. It’s useful, but it lacks quality: the keys are small and spongy, while the trackpad is minute and lacks responsiveness. It’s just about acceptable for navigating Steam or Windows 8.1, but one of Logitech’s larger living room keyboards would be much better.