What is the Alienware Alpha?

Valve created headlines when it previewed a wave of Steam-powered PCs to take on consoles, but the scheme was postponed, with hardware manufacturers left in the lurch. That hasn’t stopped Alienware launching its latest desktop. The Alpha was announced as a Steam Box, but it now runs a custom, controller-friendly UI built around XBMC.

This pint-sized PC is aimed squarely at the living room – it’s smaller than the PS4 but matches it and the Xbox One for performance. Alienware even includes a wireless Xbox 360 controller as part of the package. It’s an effective, good value package, though we’d recommend opting for the faster quad-core Core i5 and 8GB RAM version if you can afford it. 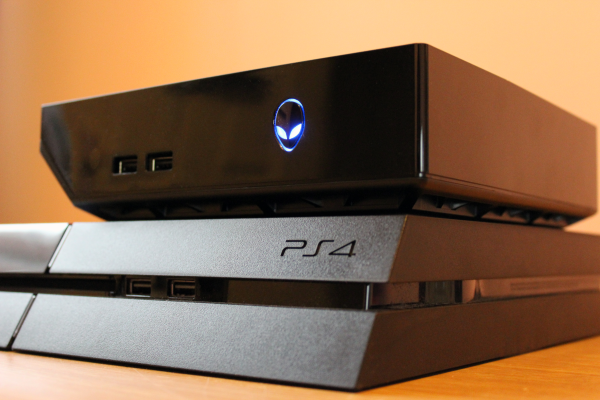 The Alpha looks the part. Its sides are coated with glossy plastic, and the front has a glowing Alienware power button alongside two USB 2.0 ports. The top has a matte finish and is divided with a trio of centred lines, and one corner is cut-away to show off more LEDs.

Alienware’s latest looks good enough to sit alongside the PS4 and Xbox One, and it’s smaller than its living room rivals. The Alpha is 200mm wide, 200mm deep and 56mm tall; the PS4 is 3mm shorter but is 305mm wide and 275mm deep. The Xbox One, meanwhile, is much larger at 333mm long and 79mm tall.

The Alpha’s 1.54kg weight makes it look svelte alongside Sony’s 2.8kg box and the 3.2kg box from Microsoft. They’re impressive figures, but bear in mind that there isn’t an optical drive – and that the Alpha uses an external power brick. The Alpha compares well to PC rivals, too. Its design is more mature than the Syber Vapor I, and the Syber is bigger and heavier – 358mm wide and a whopping 5.5kg.

The Alpha undercuts rivals for size and weight, and still manages to match the competition for build quality, with a generally sturdy feel and no creaking joints. It’s a bit of a dust-magnet, but we’ll forgive that.

It may look like a console, but the Alpha has got PC DNA. Its internals are accessible: remove four screws and the base panel pops off, then the plastic lid and sides lift away. The interior is dominated by plastic shrouds that exhaust the hot air from the CPU and GPU. They’re easy to remove – a couple of plastic clips allow them to pop off – providing access to the chips below as well as the rest of the internals. 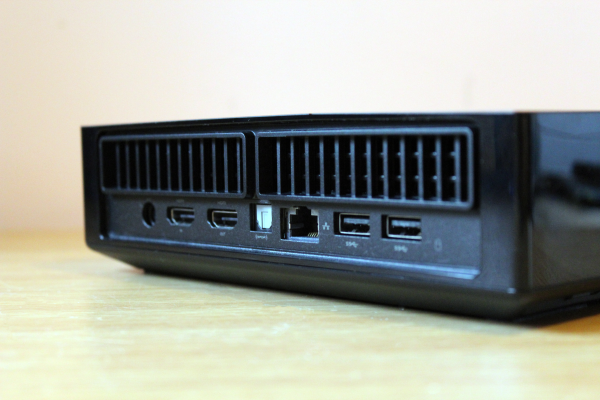 The sensible design means most components can be changed. Our sample has a memory slot free, the hard disk is a 2.5-inch model, the dual-band 802.11ac wireless card connects to a mini-PCI-Express plug and the processor sits inside a standard LGA 1150 socket. The only component that can’t be changed, sadly, is the most important – the graphics core is soldered to the motherboard.

That wireless connection is a good start, and connectivity is reasonable elsewhere. The Alpha has Gigabit Ethernet and Bluetooth 4.0, and the front has two USB 2.0 connections. The rear has two USB 3.0 ports, input and output HDMI plugs, and an optical S/PDIF connector. Underneath, behind a flap, is a fifth USB socket designed for Valve’s USB controller receiver and other similar hardware. 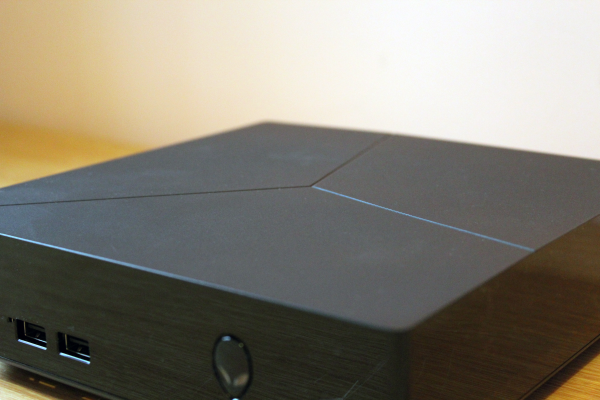 Alienware’s Alpha UI is designed to work with the bundled Xbox 360 controller. It’s basic compared to Windows 8.1: the Settings menu offers simple options for networking, audio and video alongside tools to change the colour of the system’s LEDs. The Power menu has options to reboot or shut down the system, and a link to open the standard Windows desktop.

Steam’s Big Picture mode distils the desktop app to three main menus – the store, the library and your profile page. Games and the store are navigated using a horizontal menu, with smaller links to friends and the browser. 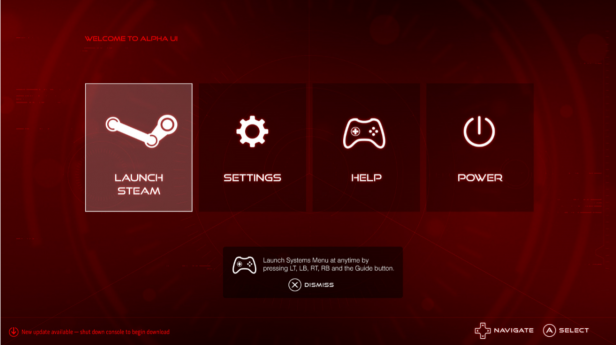 Alpha UI makes it easy to access games, but it’s not perfect. The divide between Valve’s software and Alienware’s UI is obvious thanks to different fonts, navigation and colours, even if the latter can be changed. There are practical variations; text entry in Alienware’s software is handled with a standard on-screen keyboard, while Steam serves up a more intricate dial-based system. Neither are as intuitive as a proper keyboard.

Alienware’s software isn’t particularly quick, and there are potential driver issues – Nvidia’s GeForce Experience software can’t be used to download updates, and Alienware hasn’t yet clarified how or when this machine will receive improved drivers. 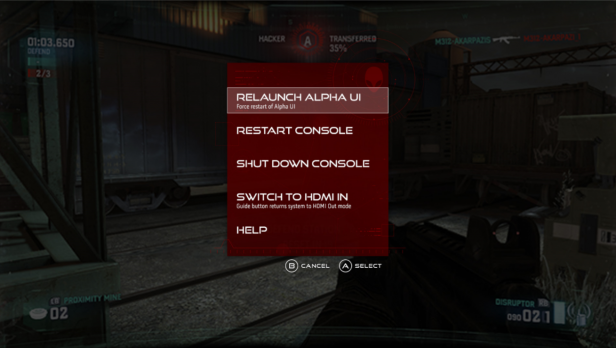 The Alpha’s use of Valve’s software means you only have access to the Steam library while using the Alpha UI. That’s still thousands of games – many more than consoles – but it’s worth remembering that if you want to use Origin, UPlay or anything else you’ll have to head to the desktop and connect a keyboard and mouse.

This does break the Alpha’s console illusion, but it’s not necessarily a bad thing; it means even more games are available, and it also means the Alienware can be used for work, web browsing and more – functions that aren’t easily available on the consoles.

Next
Performance, Options and Verdict Review