These Pro AKG K371-BT headphones sound great, presenting a largely neutral and informative sound. However, there are issues with headband design plus these headphones aren't rugged enough to survive some wear and tear

The AKG K371-BT are “pro” headphones that will happily skip out of your home studio, or unplug from your digital piano, and take to the streets.

AKG has added Bluetooth to the wired-only AKG K371, with the £50 price boost as a result not appearing too steep.

These units are better monitor headphones than the rival Audio-Technica ATH-M50XBT thanks to superior mid-range accuracy and a generally more neutral approach. However, several fundamental design issues impact comfort, and raise questions over how long these £155 headphones will actually last.

The K371-BT’s “pro” identity means AKG didn’t have to worry quite as much about keeping the pair as sleek as models such as the AKG N60NC. A hard-wearing, heavy-duty construction is at least as important as style in a workhorse pair of headphones.

However, headband design is the AKG K371-BT’s biggest issue. 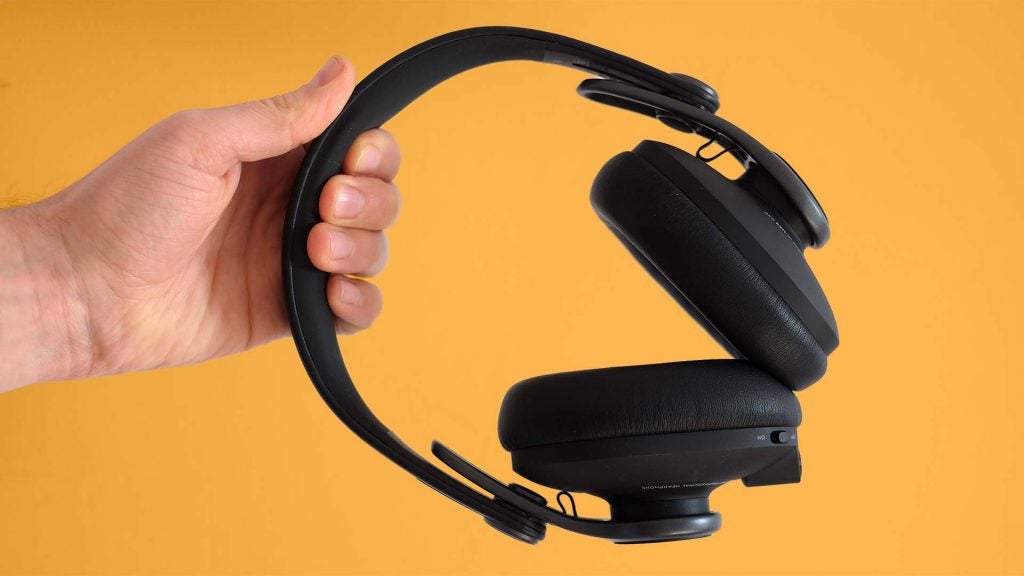 These headphones have a slightly unusual slider mechanism. It lets the cups click up and down to fit your head, and swivel around into the headband for easy storage. However, design-wise, it’s far from perfect.

On my head, I’ve found the the left side always slides down a few notches. Look in the mirror with them on and you can also see the additional stress point created on the headband itself, where the AKG K371-BT’s rubbery head padding meets a piece of plastic that covers the steel inside. 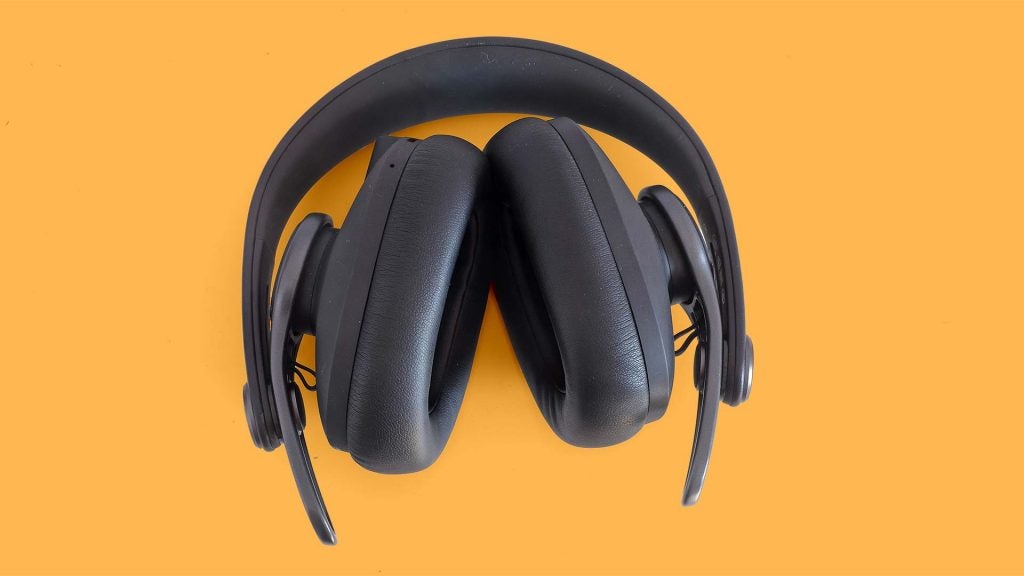 I have a big head, which worsens the effect. But when you can see parts of a headphone starting to pull apart as you stretch the headband, it’s worrying.

It’s perhaps one reason classic DJ and studio headphones such as the Beyerdynamic DT100 and Audio-Technica ATH-M50 have relatively simple headband constructions. I’ve used those pairs for years at a time, and it was the ear pads that were first to show any real wear. I don’t think this will be the case with the AKG K371-BT.

Neither do these headphones place even pressure around your ears, and you have to fiddle with the sliders to create a half-decent seal. Isolation is, as a result, fairly minimal. 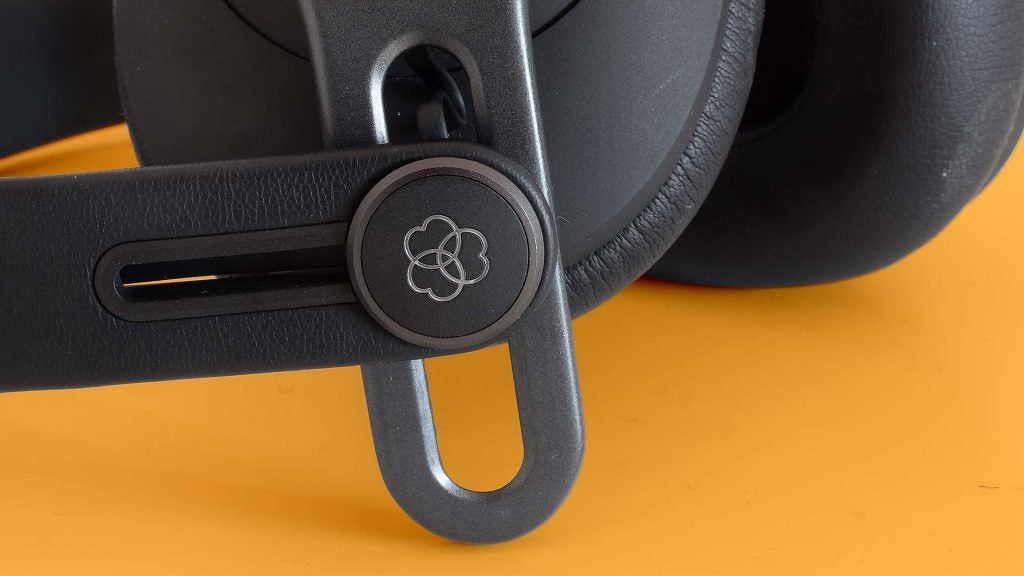 All the constituent parts of the AKG K371-BT seem solid. The cups are made of a tough plastic, their stems are aluminium and the cup padding is thick, soft, and covered with good-quality faux leather. This does little to help me have faith in their construction. There are a couple of weak links that don’t seem to have been considered nearly well enough.

In other respects, the AKG K371-BT offer more for the pro crowd than rival pairs, however. The cup connector is a tough mini-XLR, not a 3.5mm socket. The cable clicks firmly into place, of which three are included. There’s a short cable for your phone, a long one perfect for your digital guitar amp or piano, and a coiled cable that stops you pulling equipment off a desk if it snags.

A carry case is included, too. 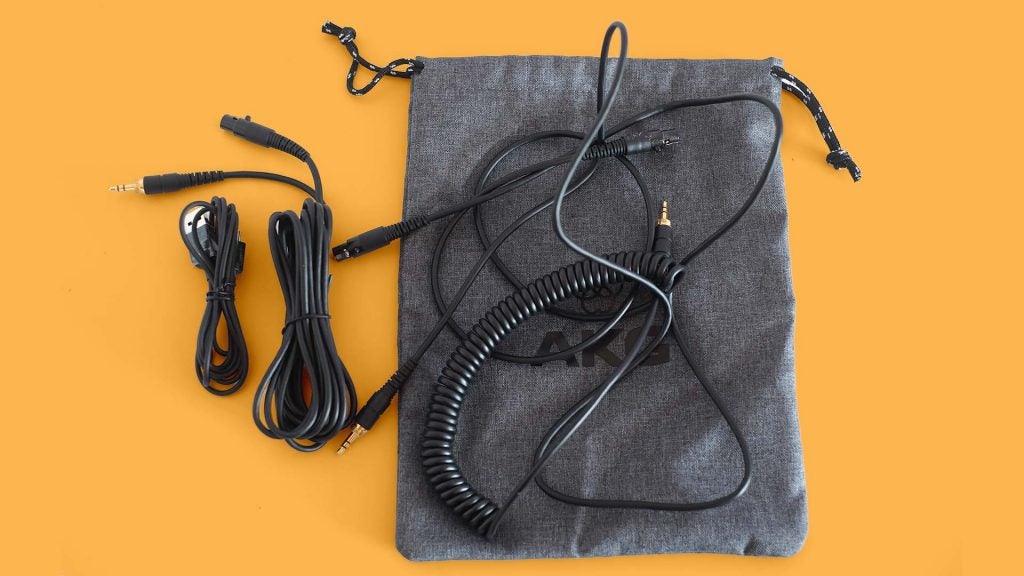 The AKG K371-BT are part of a relatively new class of pro-style headphones that also have Bluetooth.

AKG’s handling of wireless is mixed. Let’s start with the good stuff.

Battery life is excellent, rated at 40 hours. And while these headphones have a mechanical on/off switch, I haven’t seen battery life drop significantly after accidentally leaving them switched on, which I do 99 times out 100.

Wireless stability is great, too. 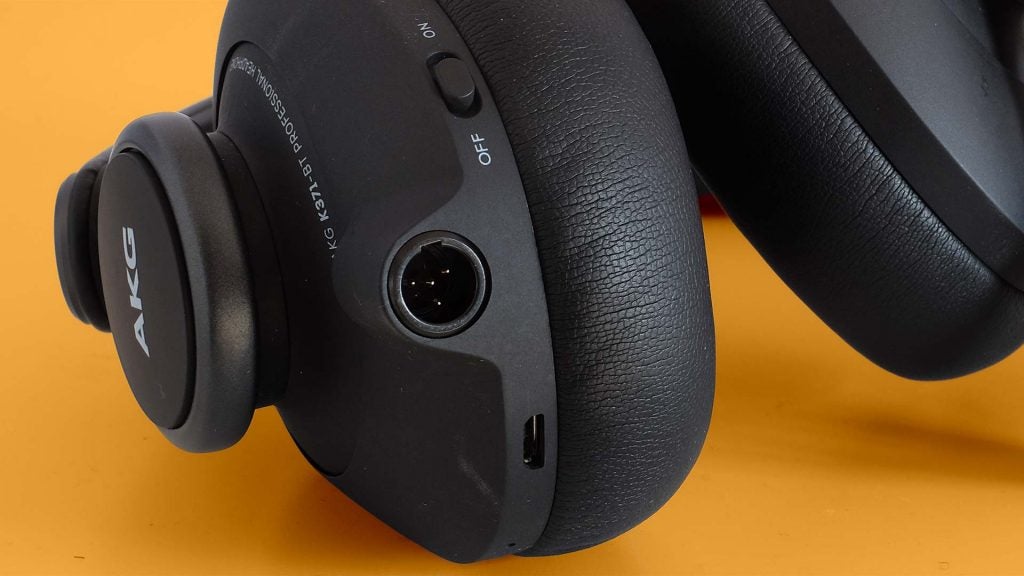 Now for the bad bits. The AKG K371-BT use a micro-USB plug to charge. Micro-USB is now more-or-less a “legacy” standard, and its use may be annoying if you have a USB-C phone. The last thing most of our houses need is more cables lying around.

These headphones also use gesture controls. Whenever I use a new pair of wireless headphones, I see how far I can get get without looking at the instructions. In this case, almost nowhere.

On the AKG K371-BT, it’s the left ear-cup cap that’s used for gesture controls. Two taps for play/pause; swiping left/right/up/down switches tracks and changes volume. However, the limited area of the touch surface means you’ll have to be quite particular about your finger movements. I found that even a double-tap too failed to register.

The AKG K371-BT also appear to only support the SBC and AAC codecs, not aptX or aptX HD. This is less of an issue than it once was, however. Android now supports AAC, and it offers higher quality streaming per kilobyte than standard SBC. Lag with both SBC and AAC is minimal, too (I used the OnePlus 8 to test this). 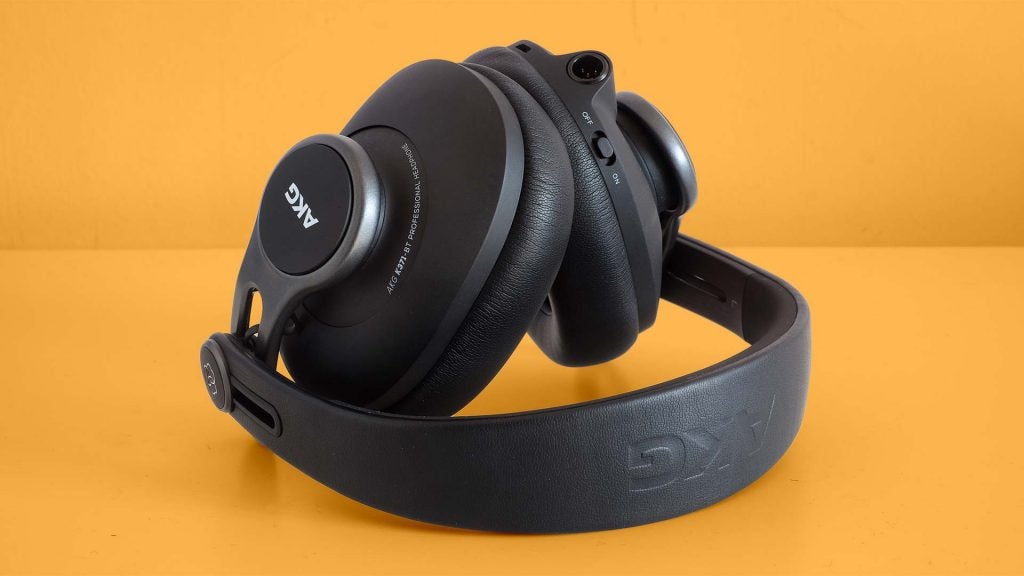 Earlier in this review, I compared the AKG K371-BT to the Audio-Technica ATH-M50 unfavourably. Of the two, I’d trust the Audio-Technica headphones to survive a few years in a home studio environment. You can add other pairs such as the Beyerdynamic DT770 and Shure SRH840 to that list too.

However, I’d favour the AKG K371-BT sound for mixing and mastering over the Audio-Technica ATH-M50xBT every time.

They have among the closest to neutral and flat frequency response you’ll find in a Bluetooth headphone at the price. The mid-range is where this is heard most clearly. The Audio-Technica ATH-X50xBT’s mids sound compressed and manipulated next to the more coherent and present AKG K371-BT.

Vocals sound much more natural, whether you’re mixing them or simply listening to Spotify. 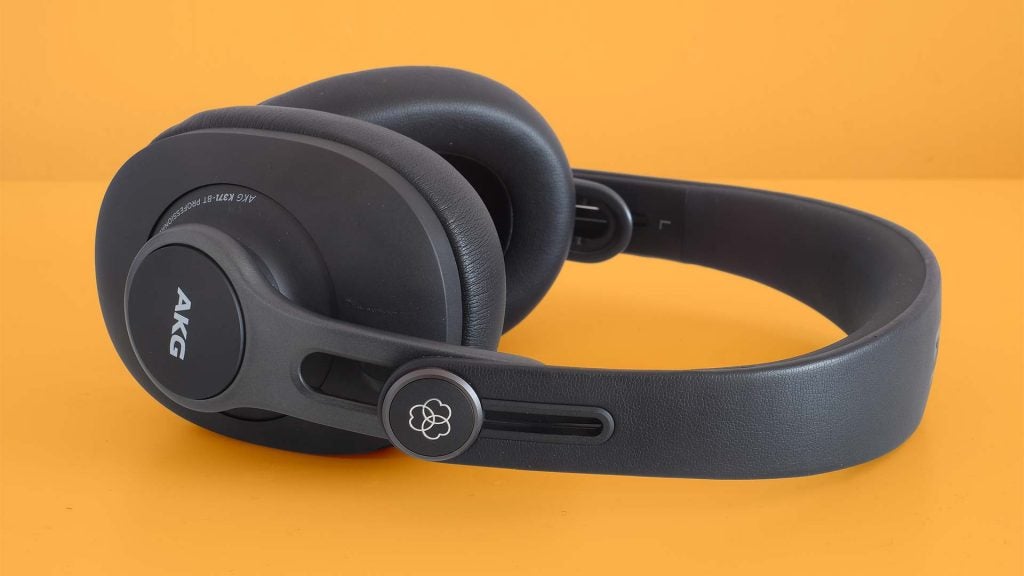 Every part of the frequency spectrum is handled in a measured way. Sub-bass is present, and delivered with consistent polite force right down to the some of the lowest audible frequencies. Normal bass doesn’t boom or dominate, and the treble holds a fair amount of information without dazzling with the bite or shimmer of a bright headphone.

The AKG K371-BT are exactly what they should be. They’re largely faithful headphones you can rely on to EQ tracks in a home studio without the results being obviously skewed by monitor headphones that colour the results in their own stylised way.

These headphones aren’t perfect, though. While the mids do stand out in their class, their texture is a little soft. Separation is unremarkable among good £150 headphones, and moderate sound scale and dynamics mean the AKG K371-BT aren’t going to thrill you in the same way some consumer headphones might. 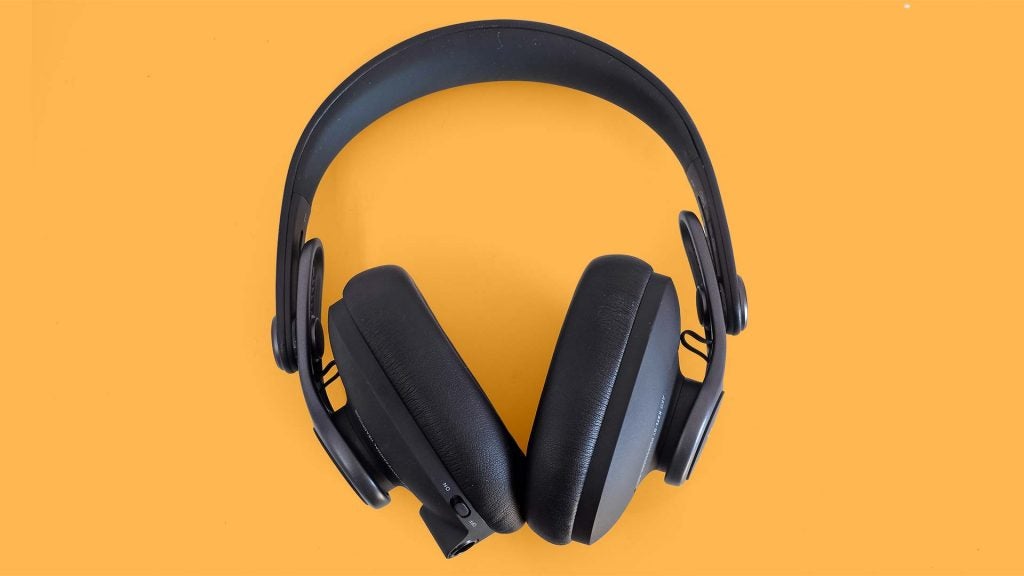 The AKG K371-BT sound as I hoped they would. AKG hasn’t added any obvious ear charming techniques alongside Bluetooth, which gives these “studio” headphones a mainstream appeal.

However, design-wise they don’t appear built to last. The headband structure looks and feels under strain on larger heads, and that’s before you even consider years of normal use in a home studio.

The idea of a single pair of studio-bound headphones that you can also use on the street is a good one. But for now, I’d still recommend the classic AKG K701 over these for a home studio. Or the AKG K271 Mark II, if you need a closed-back set.

Audio-Technica’s ATH-M50xBT are the obvious alternative, if you love the idea of a pro/wireless dual personality. Their sound is less neutral, but their construction is far more reliable, and their isolation better.