Excellent build quality and design are let down by average performance and a weak battery.

What is the Acer Switch 7?

A Wacom EMR stylus and a keyboard dock is included in the box – which, at a glance, makes the Acer Switch 7 a compelling alternative to the Surface Pro; the latter requires you to shell out extra for those two extra accessories.

What’s more, the review unit we’ve seen is the “Black Edition” (SW713-51GNP). With its new Surface Pro 6 range, Microsoft is mixing up its usual colourful livery with a new all-black look. 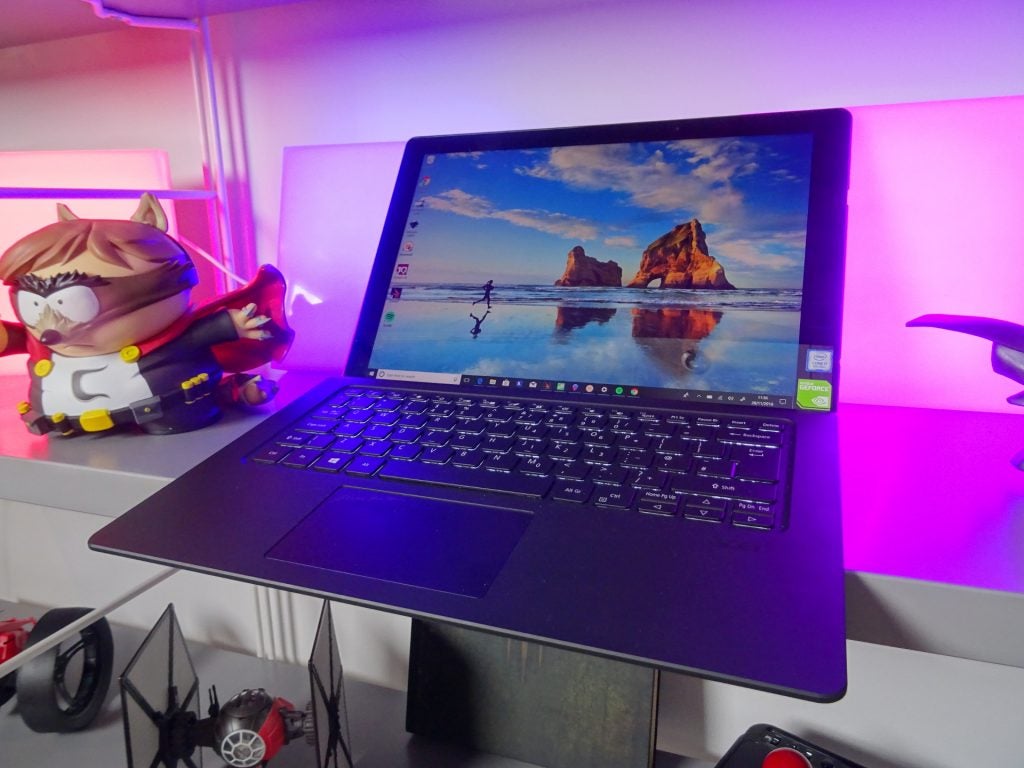 Coming with a stylus and a keyboard dock in the box, the Acer Switch 7 cockily cocks a snook at the Surface Pro 6.

At a glance, the Acer Switch 7 is a typical convertible – it’s a black tablet with a dark grey keyboard dock. Like many docks, the keyboard accessory snaps into place via some magnetic strips. This is strengthened by two plastic clips that help lock the dock into place.

Unlike many convertible tablets, the Switch 7 features a neat metal kickstand. The added weight makes for a very stable design. I can confirm that the Acer Switch 7 is particularly resistant to inquisitive cats who enjoy cuffing things off tabletops when they think you’re not looking.

Acer has built a fingerprint scanner into the bezel of the Switch 7. This works quickly – and if you want to bypass the usual rigmarole of inputting PINs, passwords or using Windows Hello (which uses facial recognition to unlock laptops) then it’s a real plus.

Two front-facing speakers are built into the tablet – one either side when the Switch 7 is docked or in landscape mode.

In terms of ports, you don’t get much on the Switch 7 – one USB-A, one USB-C, a 3.5mm headphone jack and a microSD card slot – but that’s normal for devices such as this. 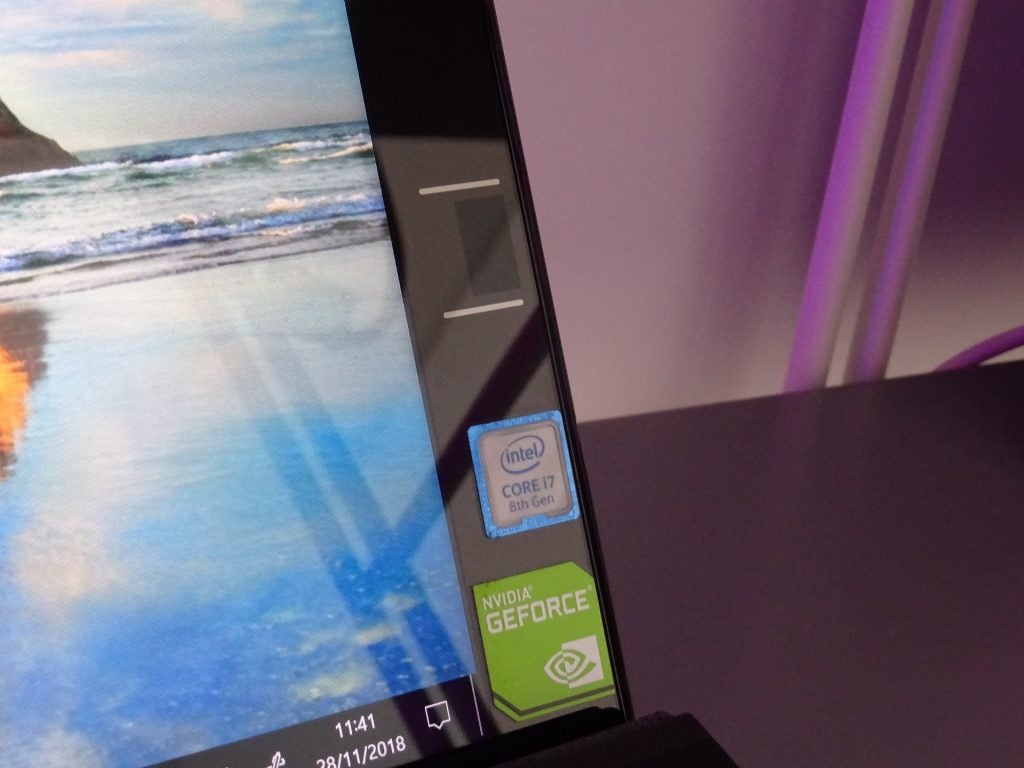 The fingerprint scanner sits over on the right of the Acer Switch 7, when docked. At some angles, it’s uncomfortable to use – but it unlocks the device quickly.

It’s generally easy to type on, too. Although the keys exhibit a slight wobble in places, they snap back nicely and – thanks to the heavy kickstand – you can confidently hammer away at reviews, reports, articles, or whatever you’re working on and you won’t see the Acer Switch 7 slowly get shunted across your desk. Even though there’s barely any travel, the angle of the dock creates an illusion of depth.

I don’t like the fact that the arrow keys are both tiny and tucked away with the Home/Page Up and Page Down/End keys immediately above the left and right arrow keys. It’s far too easy to hit the wrong key here.

Admittedly, I had a similar issue with the Dell XPS 15 2-in-1’s keyboard layout to start. Over time, I’m confident that muscle memory will kick in, but it’s nonetheless frustrating at first.

A big plus is that the dock is backlit, so if you’re working late then it will be a little easier to see where everything is.

The trackpad is nicely sized. It’s about one third of the width of the dock wide. It has a rubberised coating that provides a bit of resistance when you’re swishing and swiping through menus. Some people might prefer a smoother trackpad; personally, I found that a degree of drag actually made it easier for me to navigate spreadsheets and web pages.

I typically find that most trackpads are too sensitive to use out of the box, so I invariably have to dive into the settings and dial things down a notch. Sensitivity on the Acer Switch 7 was fine for me. Equally, the pad supports left and right clicks, but by default, to right-click on something, you have to tap the trackpad twice. Again, if you prefer a more old-school approach, changing this in the settings is easy. 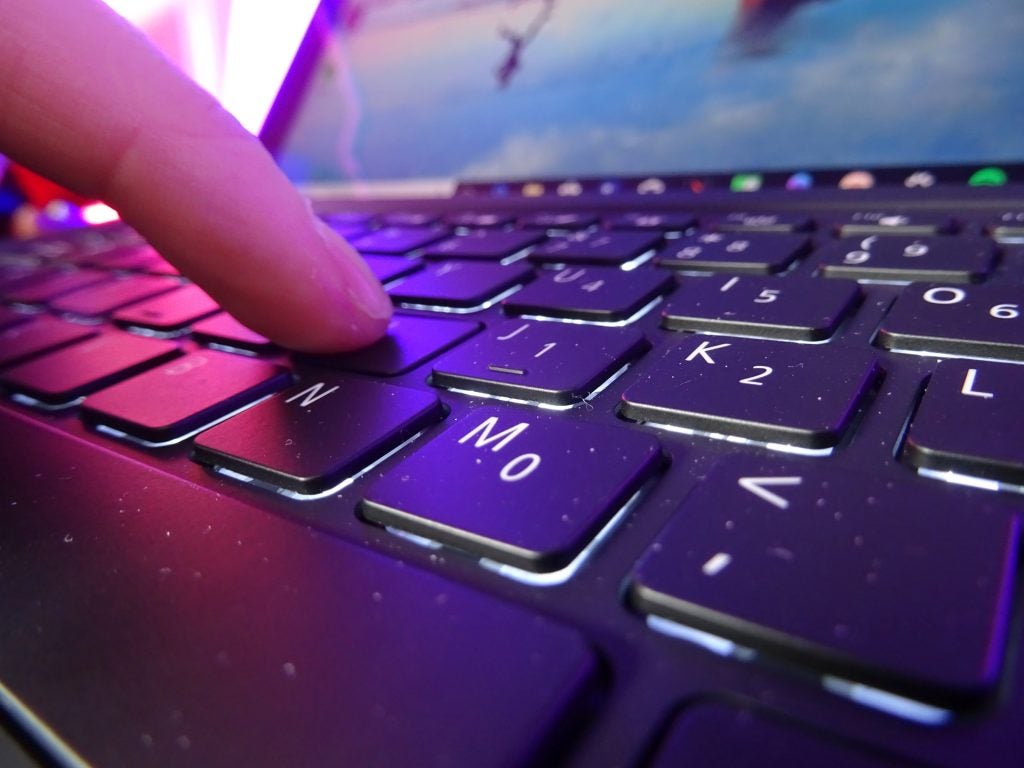 The typing experience on the Acer Switch 7 is surprisingly good, considering how thin the keyboard dock is.

I haven’t had the opportunity to properly play with the stylus, so can’t comment on how good the Switch 7 is for digital art just yet. However, I can share the results of elementary colorimeter tests performed on the display.

I recorded maximum brightness levels of 380.17 nits with the X-Rite i1 Display Pro colorimeter on the Switch 7. That’s a good result – anything approaching 400 nits is plenty bright enough for writing, digital art and streaming media. Black levels were also impressive at 0.23, adding up to a fantastic contrast ratio of 1633:1.

As such, bright areas will look clear and brilliant; dark areas will look as they should, neither being flat nor washed out. Colour temperature was 7290K, higher/cooler than the 6500K ideal. I’ve not yet noticed any instances of blues looking unnatural or any warmer colours suffering as a result.

Colour gamut coverage was similarly decent. The Switch 7 maxed out 98.7% of the sRGB gamut, which will be of interest to digital artists.

Adobe RGB and DCI-P3 coverage was less impressive – I saw readings of 69.3% and 73.1% respectively, which makes this display not so ideal for intensive photo work. It’s common for laptop/tablet displays these days to cover more of the sRGB gamut than Adobe, so the Acer Switch 7 is by no means an outlier here.

The relatively underpowered MX150 GPU (compared to something like, say, an Nvidia GeForce GTX 1050) ought to give serious photographers pause anyway, so this perhaps isn’t a big deal.

The main takeaway point is decent brightness, high levels of contrast, combined with excellent sRGB coverage is good news for anyone wanting a tablet/laptop hybrid for sketching and drawing. 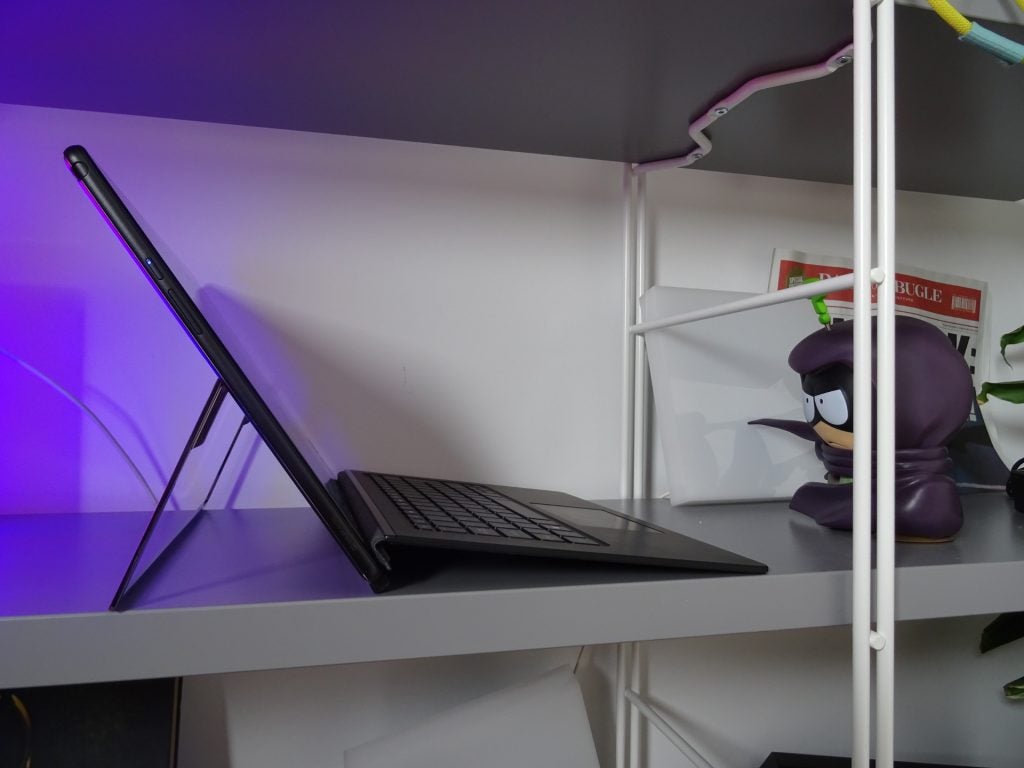 Don’t be fooled by how thin the kickstand looks here – it’s pretty hefty and makes for a sturdy, wobble-free typing experience.

Generally speaking, the Switch 7 does an OK job for everyday tasks, but considering how much one costs, the results are pretty underwhelming. Here are the results I got when putting it through the standard Trusted Reviews benchmarking process:

Geekbench is designed to give you an at-a-glance idea of how well a device’s processor’s perform when subjected to stress tests, the higher the number, the better. Geekbench 4 sets 4000 as the baseline score for the single-core stress test, and 8000 for the multi-core test.

Looking at the results above, you can see that the single-core score of the Acer Switch 7 is not that great.

Disk scores are also not fantastic, and while I’ve not had any immediate issues when it comes to launching programs or opening files, those scores do not bode well for long-term use.

So it’s not perfect for gaming. That’s fine, it’s not a gaming laptop, it’s pitched at creatives. How good is it for sketching and painting?

The stylus is great for note taking and quick sketches. Smaller brushes seemed to be respond instantly, whereas the bigger the brush, the more noticeable the lag is. The pen can also be a little uncomfortable to hold over long periods of time too, if you have big hands like me. 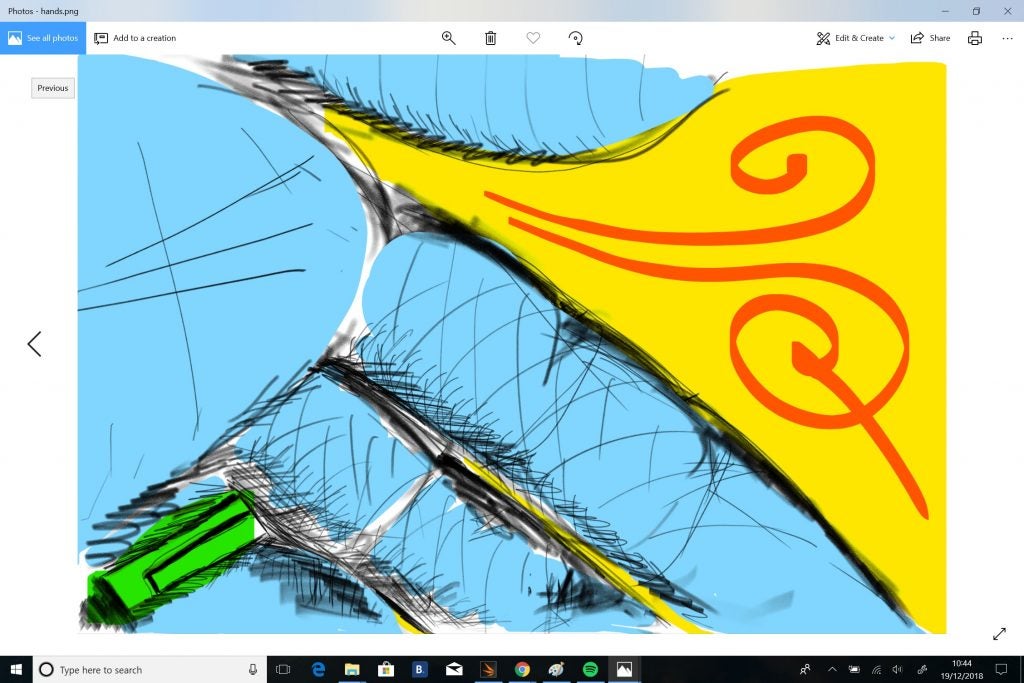 The Switch 7 is great for sketching and scribbling away, but expect to encounter lag when using bigger brushes.

I’m not a pro illustrator by any stretch, so the ‘work’ I did is perhaps not representative of what an art student or graphic designer might do. Despite my amateurish penstrokes, I made a point of, during my hours or scribbling, to make use of all of the different pens and brushes in Sketchpad’s arsenal and use a variety of colours and brush sizes. Once I learned to anticipate the lag which accompanied bigger pens, I was able to sketch and paint with more confidence.

A feather in the cap of the stylus is that it’s passive, and doesn’t require a power source to work. So while you’d need to keep an eye on the Switch 7’s battery when sketching at least you don’t need to fret about keeping the stylus topped up.

Day to day, I’ve not noticed any huge instances of instability or slowdown, but by ‘day to day’, I mean, doing my day job at Trusted Reviews, streaming something on Netflix, Now TV, or iPlayer in the evenings. I can say with absolute certainty, that the Switch 7 is fine for basic work.

But then again, if you want a laptop/tablet for basic work, there are other (cheaper) options available. 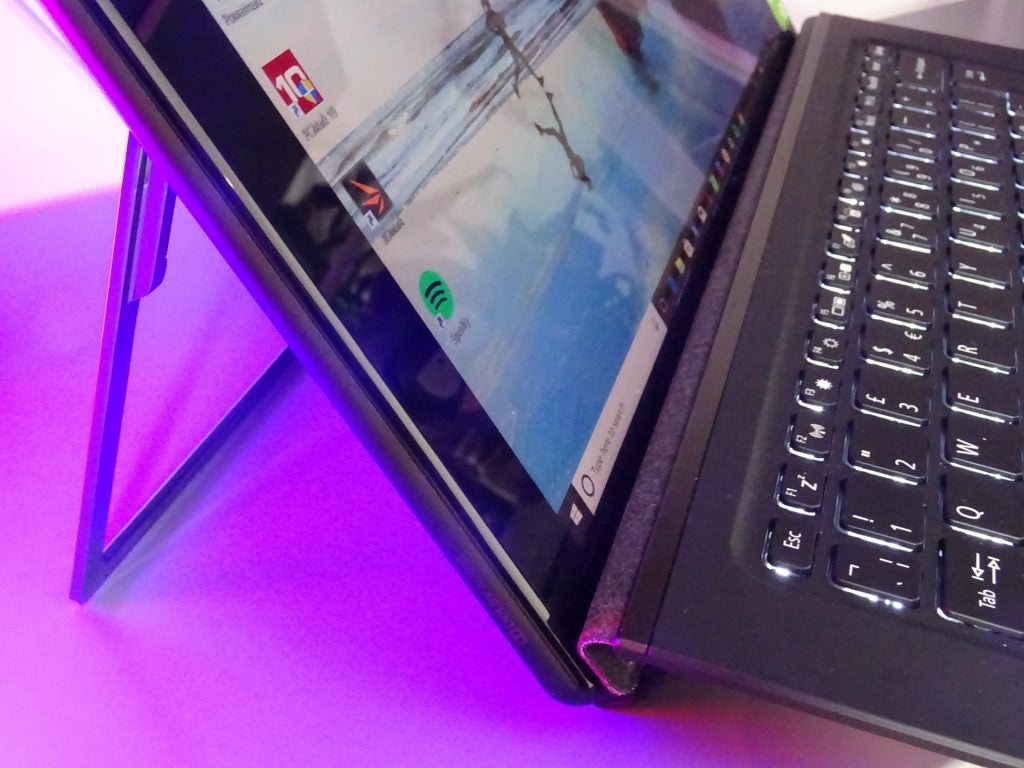 Powermark scores for the Acer Switch 7 are not good. With the screen’s brightness set to 150 nits, I used Powermark to simulate 10 minutes of browsing and five minutes of video streaming until the battery hit critical levels. I got three hours and 33 minutes, which is really not very good.

The Surface Pro 6, tested under the same conditions, gave me seven hours and 55 minutes.

I’d get around 4-5 hours of power out when using this just for writing with Spotify on in the background, again, with the brightness dipped to 150 nits (roughly equivalent to 30% brightness), and about 4 hours of iPlayer binging time.

With the screen still locked at 150 nits, I would sketch for about an hour with a variety of pens on the Sketchpad app, and have 35-40 per cent left in the tank.

While the Switch 7’s battery drains like a leaky bucket, I’m happy to say that it charges back up pretty quickly. From an empty tank, expect to get 40% of juice after half an hour and 70% after 60 minutes. You’ll typically be able to fill the Switch 7 from empty after an hour and a half.

While you should never leave home without your mains adapter, you’ll especially want to keep an eye on the meter when using a Switch 7 on the go. 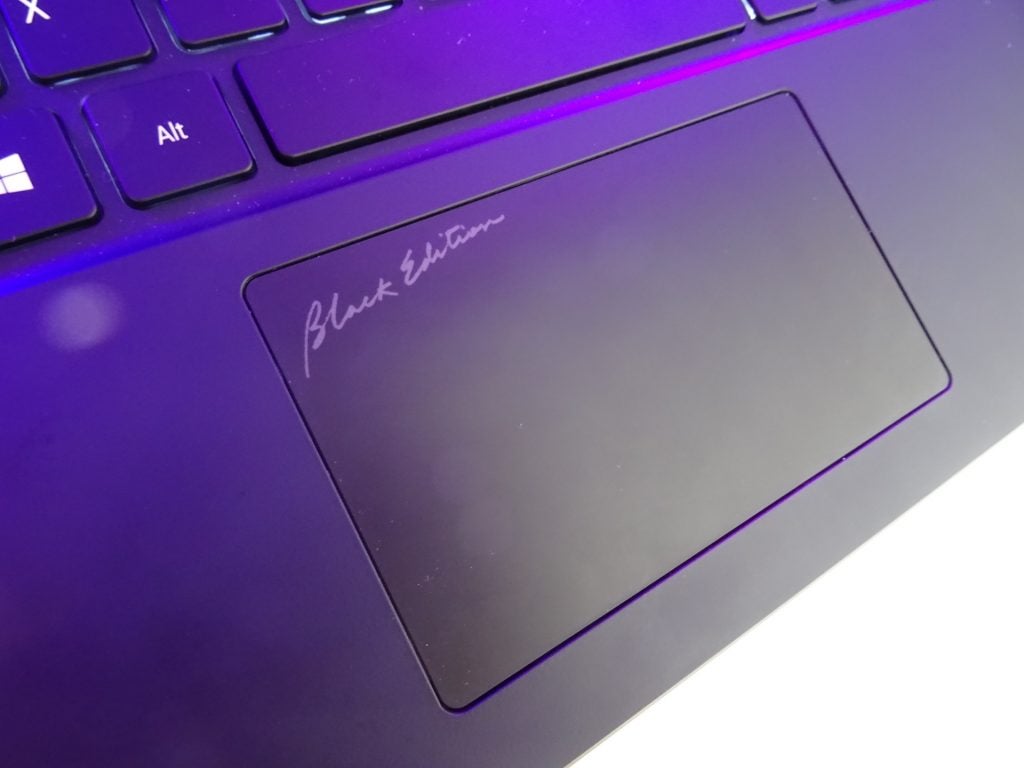 I found the Switch 7’s rubbery trackpad a joy to use, but others may find it something of a drag.

Why should I buy the Acer Switch 7?

The Acer Switch 7 is a lightweight convertible that’s offers a decent typing experience, sturdy design and comes with a stylus included, so you if you want to do some sketching on the side, you don’t have to shell out any more than

The version I reviewed costs £1799, the same as the standard price of an equivalent Microsoft Surface Pro 6 without a keyboard dock or a stylus. On that basis, the Switch 7 looks like a much better buy. My opinion, having used both devices, is that this is a false economy-type argument. The benchmarking results speak for themselves; note that the Surface Pro 6 I’ve reviewed features a less-capable i5-8250U processor, and yet it still returned better results. At the current RRP, I don’t think that the Switch 7 is that good value. You could save more by buying a Core i5 Surface Pro 6 with the keyboard and stylus, and get a comparable if not better experience.

The Acer Switch 7 isn’t good enough to justify its high price tag. It’s especially let down by the battery life, which is a shame, as it has the potential to be a good alternative to the Surface Pro 6. Both build quality and design are excellent, but the overall performance is just so-so.