The Acer Predator Triton 300 is impressive in several important departments. It’s got the gaming ability to handle any mainstream single-player or eSports scenario, good components elsewhere, a decent keyboard and a robust frame. It’s also cheaper than most of its rivals. The lower price does mean compromise though – the screen is mediocre, connectivity could be better and you could find more pure power in other machines. It’s a solid mainstream option, but it doesn’t excel in any one area.

This is currently in our Best Gaming Laptop list.

The Acer Predator Triton 300 is one of the more affordable RTX 2070-based gaming laptops around right now.

It’s a good price that undercuts most rivals, but I’m always a little wary when a laptop arrives with high-end hardware and a relatively low price – it usually means that there has been compromise in other departments.

Acer Predator Triton 300 design – Not bad, but not great either

The Acer Predator Triton 300 has reasonable exterior design, but it never really pushes the envelope. Visually, it’s a classic gaming laptop. The lid has a sizeable blue logo and some outlandish air vents, and there’s an RGB LED keyboard.

Acer’s machine weighs 2kg and it’s 29.9mm thick, so it’s not bad when it comes to dimensions – light and slim enough to take to LAN parties without any trouble. Build quality is good too: the rear of the display is strong, and the base is very robust. 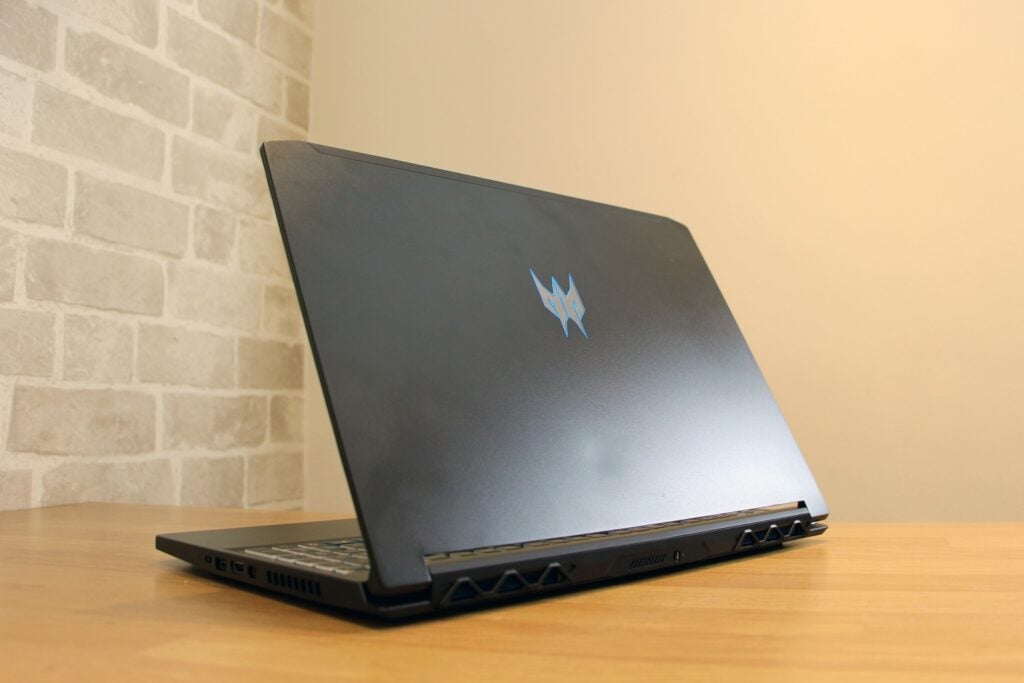 The speakers are good but not great. They’re loud enough and good enough for casual gaming and media, but they do suffer with weak bass and a tinny top-end. A headset will be better.

The left-hand side has two USB 3.2 Gen 2 Type-A ports, the Gigabit Ethernet port and a headphone jack, and on the right-hand side you’ll find USB 3.2 Gen 2 Type-A and Type-C connections alongside HDMI and mini DisplayPort. Above the display is a 720p webcam that offers middling quality and no Windows hello support. Removing the base of this machine grants you access to two memory slots, the SSD, the wireless card and a 2.5in drive bay, so there’s plenty of versatility.

It’s a solid start, but the Acer does have some rivals that go further in some departments. The latest HP Omen 15 looks a little more mature and it includes a card reader, for instance. The Gigabyte Aorus 15G has more business-like aesthetics, alongside a card reader and fingerprint scanner. And then there’s the Razer Blade 15, which looks sleeker and smarter than every other laptop I’ve mentioned here.

The Acer’s keyboard has a good layout, featuring a number pad, a double-height Return key and a dedicated button to load the Acer PredatorSense app.

The only negatives here are the lack of a Caps Lock light and the inclusion of the power button on the keyboard itself. The lighting is only middling too: while this keyboard does have RGB LEDs, it’s four-zone lighting, not per-key illumination. 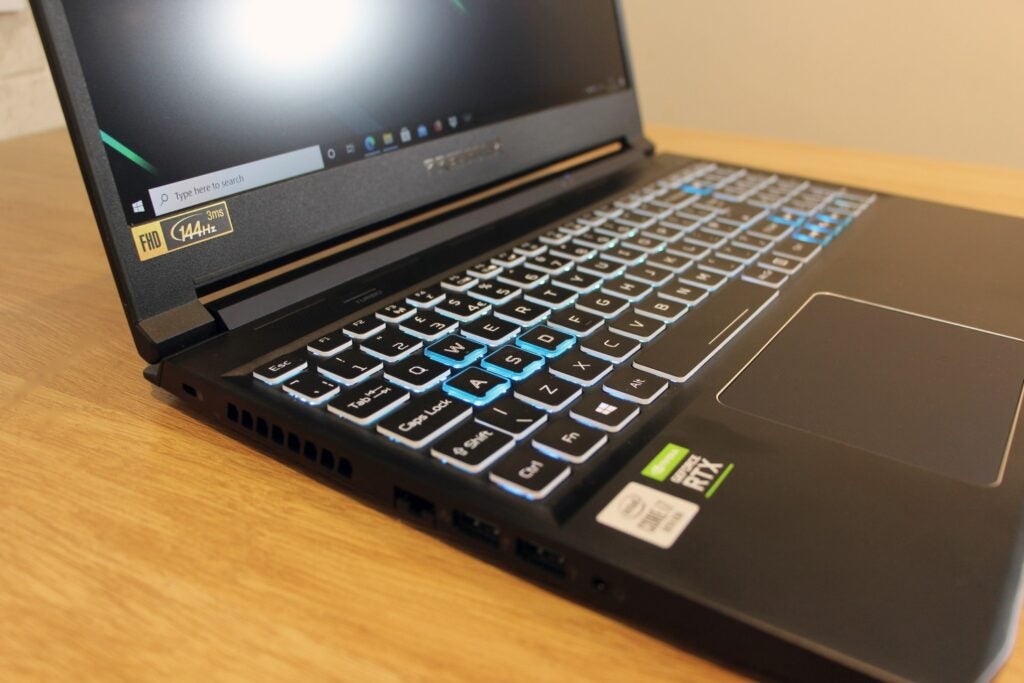 The keyboard is sunken into the laptop’s base, so there’s plenty of travel, and the Acer’s sturdy construction means that typing on this unit is a satisfyingly robust experience. The buttons are a little wobbly in the corners, though, which makes typing a little inconsistent at speed, and the buttons could be faster and a tad crisper.

The keyboard is better than the Razer and HP’s keyboards, both of which are shallow and lack numberpads. The Gigabyte is the best option for gaming here, although that Aorus machine has a rare and excellent mechanical keyboard.

The trackpad is decent – large enough for gaming, and with two buttons that are fast and clicky. They’re better than most laptop trackpads and fine for mainstream gaming, although anyone who’s serious about their gaming will get better performance from a USB mouse.

The Acer Predator Triton 300 has a 15.6in, 1080p IPS display with a 144Hz refresh rate and no syncing. That’s entirely normal in this part of the market, and great for mainstream gaming. It’s large and crisp enough to prove absorbing and the refresh rate delivers smooth motion in single-player and esports titles. Only the keenest competitive players will need more here. 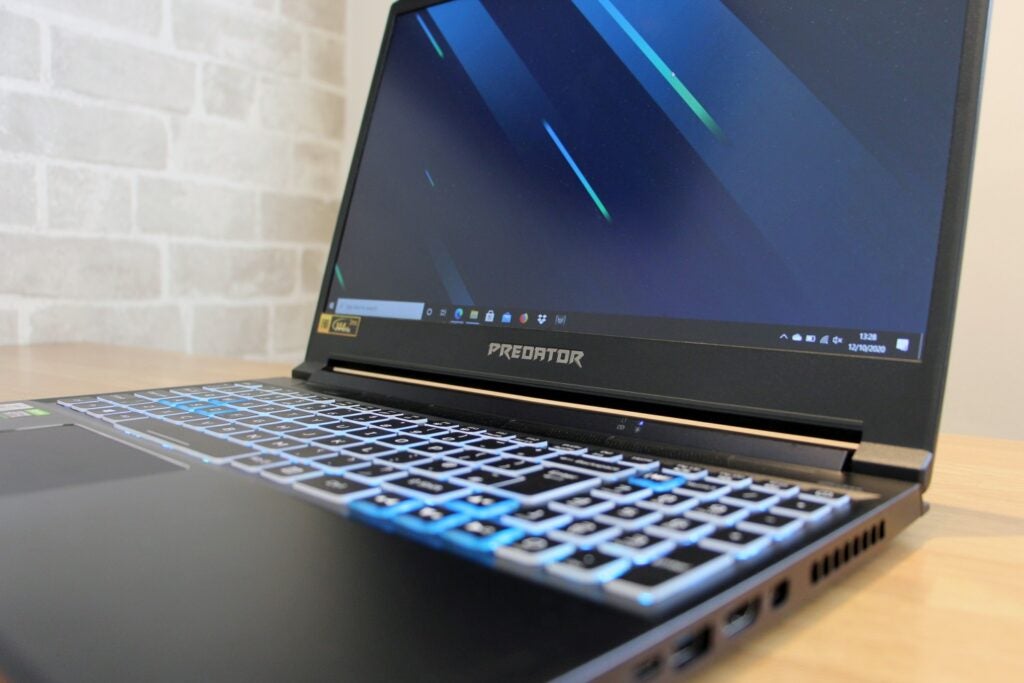 The Triton’s colours have reasonable accuracy and uniformity, but this panel does suffer when it comes to colour temperature and gamut coverage. When you’re gaming and watching media, it’s not a deal breaker, but it does mean this screen appears a little chilly and slightly washed-out when compared to rivals. The Acer’s panel is also not quite good enough to handle colour-sensitive work in content creation tasks.

This screen is easily good enough for mainstream gaming, but those areas of weakness mean that you can get better quality elsewhere. Razer’s screen is brighter, and the Gigabyte’s panel is better in most regards.

The Acer Predator Triton 300 deploys an Nvidia GeForce RTX 2070 Max-Q. It’s one of Nvidia’s best mainstream laptop graphics chips, and that Max-Q designation means that its clock speeds have been slightly reigned in to improve thermal and battery performance.

The Core i7-10750H is a popular mainstream Intel CPU, and it has a solid specification – six Hyper-Threaded cores alongside base and boost speeds of 2.5GHz and 5GHz. I’ve got no complaints about the rest of the hardware used here: there’s 16GB of dual-channel DDR4 memory and a 1TB SSD with rapid read and write speeds of 3083MB/s and 2954MB/s. Connectivity is handled by dual-band WiFi 6 and Killer Gigabit Ethernet.

The RTX 2070 performed well in gaming tests. In Shadow of the Tomb Raider it was between one and four frames quicker than its rivals, all of which had RTX 2070-based hardware. It was a frame faster than the Razer and HP machines in Borderlands too, although it did lag behind the competition for Dirt Rally and Horiozon Zero Dawn.

You’ll be able to run any single-player game at a smooth framerate on this machine without any serious quality compromises, and the Acer will handle any eSports title at 144fps, which is perfect for the display. It’ll play games with Ray Tracing without issue too.

The Acer doesn’t sweep all before it, though. The Acer’s Time Spy score of 6,496 is reasonable and it improved to 6,941 using the laptop’s overclocking mode which translated to a handful of extra frames in games.

The Triton’s Core i7 CPU is a middling performer – in Geekbench and in PC Mark 10 it beat the Razer but fell behind the Gigabyte and HP machines. There’s enough CPU power to handle day-to-day web-browsing with loads of tabs, Office applications and photo-editing simultaneously. Bear in mind, though, that there are plenty of laptops with AMD Ryzen 7 chips, and they’re better for content-creation thanks to eight-core designs.

The Acer is a mediocre thermal performer. There are no issues when the Triton is running mainstream games, eSports titles and everyday workloads as the fan output is modest. Run particularly tough games, though, and the noise level increases uncomfortably, especially if you use the overclocked GPU modes. The centre of the keyboard is a tad too warm, and the area above the keyboard and the underside of the Triton are both too hot to touch. This is not a machine that can be used on your lap if you want to do some serious gaming

It’s hardly a surprise at this point, but the Acer Predator Triton 300 is another laptop with underwhelming battery life. 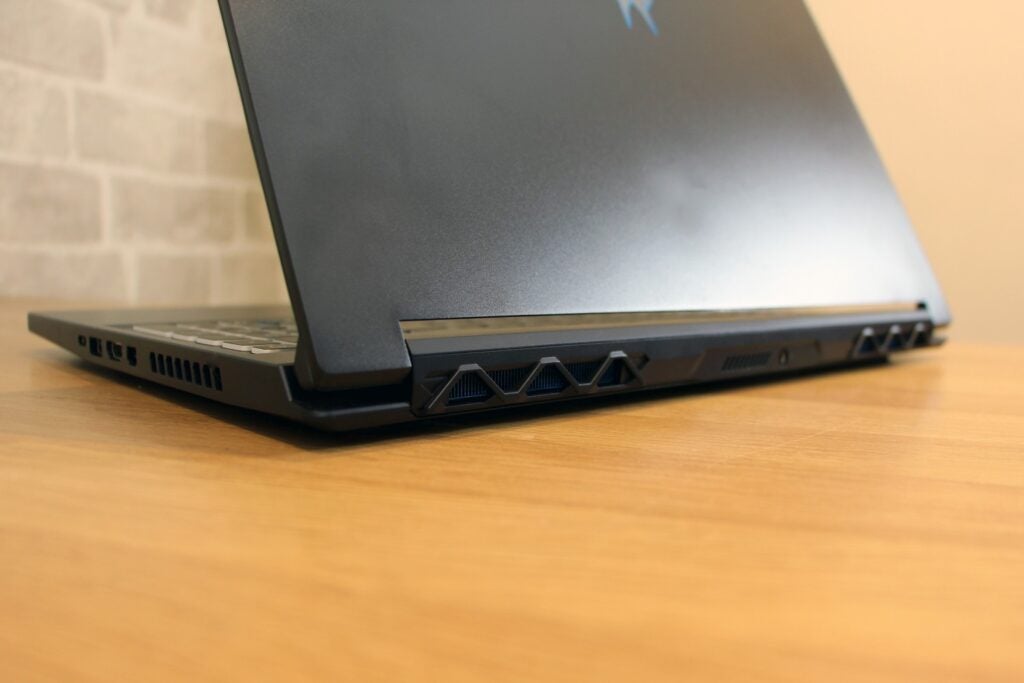 In a gaming test it lasted for just over 1 hour and 15 minutes, and in the PC Mark 10 benchmark it lasted for 3 hours and 21 minutes. That’s an hour behind the Gigabyte, and a little behind the Razer and HP machines.

You’ll be able to use the Acer for handling work on your commute, but you’ll have to use the mains if you want a gaming session out of this machine – or a day at the office.

Should you buy the Acer Predator Triton 300?

The Acer Predator Triton 300 is a good gaming laptop in several important areas. It’s got the gaming power to run eSports games, Ray Tracing graphics and high-end single player titles without issue. The rest of the specification is fast and well-balanced, and the Triton has a good keyboard, trackpad and a sturdy exterior.

It’s a little cheaper than many rivals, too but this lesser budget does manifest itself in several ways. The screen is fine for mainstream gaming but it’s not particularly great. The design is a little immature, and some rivals have more lightweight bodies with better connectivity. It’s possible to find more CPU and GPU power elsewhere too.

If you do need better connectivity, design or power then you can certainly find that elsewhere by spending only a little more cash. If you’re after a more affordable all-rounder, though, the Acer Predator Triton 300 is impressive and well-balanced.