The Holo360 is a new 360-video camera from Acer. It’s a similar concept to the Ricoh Theta S that kickstarted consumer interest in shooting 360, with a candy-bar design sporting a lens and sensor on either side.

However, this isn’t just a me-too product. For a start, it includes a 3-inch LCD screen and runs Android 7.1. But it also has SIM slot, so you can add a mobile data contract and upload videos direct to online services no matter where you are.

It should be stressed that, despite the Android operating system, this isn’t a smartphone with 360-degree camera capabilities. The Android features are focused on empowering the video features of the device, rather than providing a full smartphone platform.

Acer itself doesn’t divulge very much about the internal specification of the Holo360, but we know from other sources that it’s based around the Qualcomm Connected Camera Platform and uses a Snapdragon 625 mobile processor. This provides hardware support for 4K video, the 4G data modem, 802.11ac Wi-Fi, and an Adreno 506 GPU optimised for processing fish-eye video from VR/360 lenses.

The Qualcomm Connected Camera Platform was also used by the LG 360 CAM. However, with the Holo360, there’s no mention of the sensor included. 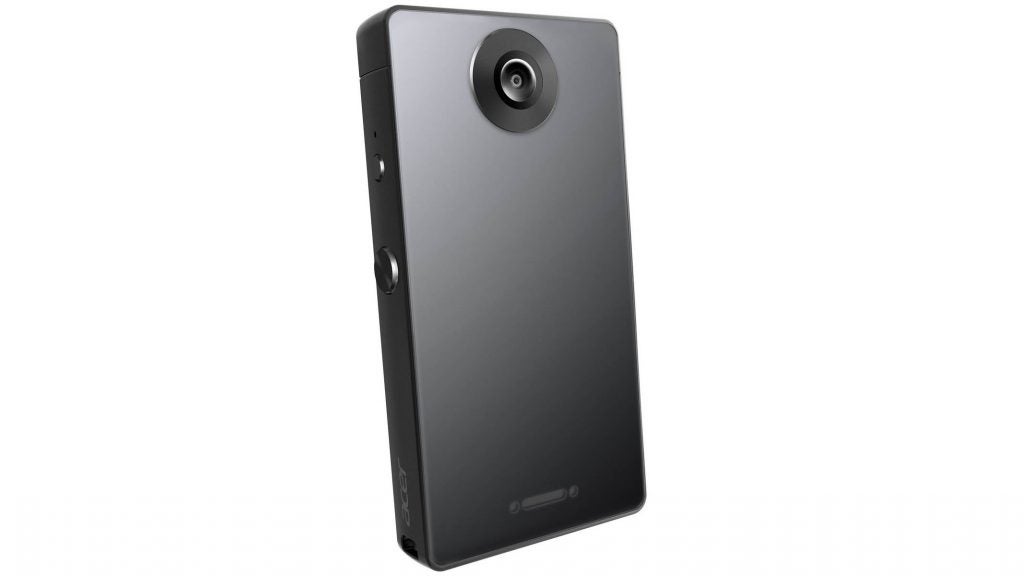 There’s also a 2K video mode with a quarter of the resolution. The Holo360 can capture still images at 4K or 6K resolution, although the latter is labelled as “normal shutter” where 4K is “faster shutter”. There’s no indication of what the difference in shutter speeds actually means in numbers, however.

The Holo360 comes with 16GB of internal storage, although almost half of that is already consumed by the Android software bundle. At the top resolution, the approximately 8GB of free space would be enough for around 37 minutes of footage. However, you can add your own microSD memory card to expand this via a tray on the side, which you slide out with the use of a paper clip (or the tool provided). The same tray is also where the mobile data SIM is installed.

Although the candy-bar format and screen are convenient, there are downsides. This isn’t the most robust device, and there’s no standard mounting screw on the bottom. As such, you’ll need to use it handheld rather than mounted on a tripod or helmet, which could be a limitation for some activities. You won’t be using the Holo360 to grab your finest skateboarding moments, for example.

At this point in a 360 camera review I’d be expressing how limited the on-camera controls are and how you need to load up a smartphone app to get full access to all the settings. But since the Holo360 is essentially a cut-down Android smartphone with a built-in 3-inch touchscreen, you can control it entirely without recourse to another device.

You can start the device by default in camera or Android mode. If you choose the former, you’re met with four icons on turning on the device, for accessing the video or stills camera and stored files. Alternatively, you can switch the interface to regular Android, after which there doesn’t seem to be an easy way to switch back to the other mode. 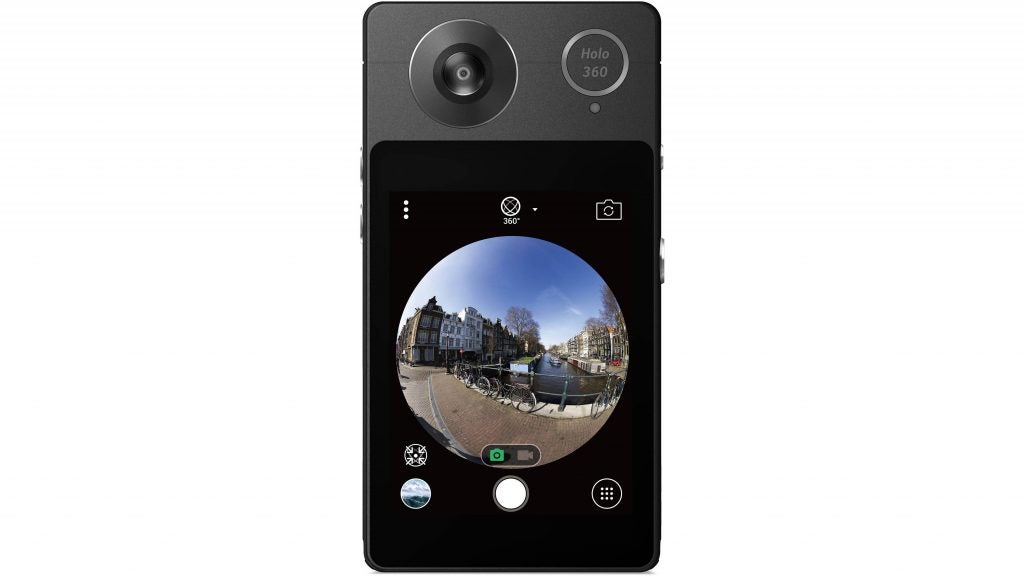 When using the camera, you can choose to view the live video from the two cameras as a 360 sphere, or a portrait section from right in front of either camera, with a wider or narrower angle. Surprisingly, there are few other settings.

There’s a brightness option with seven steps between -3 and +3 EV. You can select auto exposure, night mode, or time lapse with a frame captured every two, three, five, or ten seconds. But that’s it – which is a surprise when there is so much potential for expert features from the Android platform.

It’s complicated to get back out of Android mode, but you may not want to, as you get a full suite of Google apps included and could even download and watch commercial video content – if you like doing this on a 3-inch screen.

However, the main benefit of the full Android operating system is that you can share your 360 videos and photos directly to popular services or load them onto your Google Drive. Facebook isn’t installed by default, but you can load it from the Google Play Store, alongside other social media apps. Uploading involves processing to equi-rectangular video format prior to upload. Videos in this format uploaded to YouTube and Facebook are recognised as 360, allowing viewers to pan around as they watch.

Transferring the 360 video from native spherical to equi-rectangular for upload consumes a lot of processing power, and the Holo360 hardware isn’t particularly potent – so this takes a long time. Around 90 seconds of video took over ten minutes to process. You’re definitely paying in time for the convenience of being able to do this on the device itself.

But the biggest disappointment is that the footage is rather fuzzy. Even when viewed on YouTube at its top 2160-line resolution, the video is quite blocky and there’s an obvious stitching line on one side. This is highly likely to be because the data rate of the original footage is too low. Either way, it’s a letdown on a device that has some real potential.

Photos are a bit sharper than video, thanks to the 6.9K resolution and (probably) lower compression – although these still appear to be scaled down to 4096 x 2048 when output to equi-rectangular as shown below: 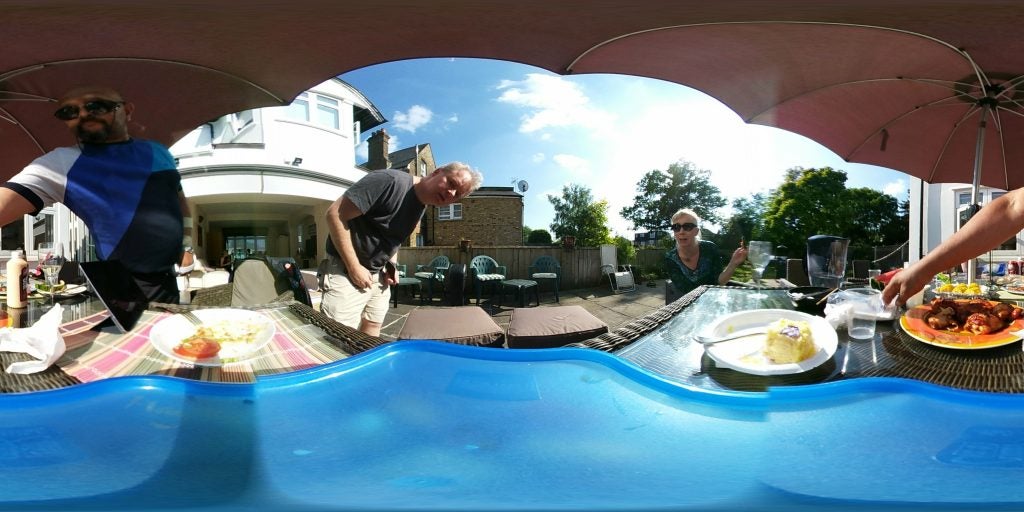 The Acer Holo360 has some unique features. The fact that you can capture and upload to the internet with one device – either over Wi-Fi or mobile data – makes sharing your 360 video footage much less fiddly than having to use a smartphone or desktop computer as an intermediary. You can share your experiences in 360 as soon as you’ve had them, without having to wait to get home first.

But the video quality isn’t that great compared to the latest devices from Garmin and GoPro. It’s also a missed opportunity that you can’t currently stream live 360 video to YouTube or Facebook, although the Android operating system may mean a software update may enable this at some point.

So, although the Holo360’s price is reasonable for a 360 video camera with this breadth of features, it’s more a bit of fun than an essential 360 video device.

The Acer Holo360 has unique abilities to upload directly to YouTube and Facebook, but video quality is disappointing.