The Acer H6517ST is a short-throw projector, capable of delivering a 100-inch image from a throw distance of less than 4ft. This makes it easier to place away from your seating position than most projectors, and removes the need for the long cable runs so often associated with projector use.

As ever when such convenience is factored in, there are one or two performance compromises along the way. Overall, though, the H6517ST is one of the best short-throw projectors I’ve tested, making its sub-£500 price look something of a steal. 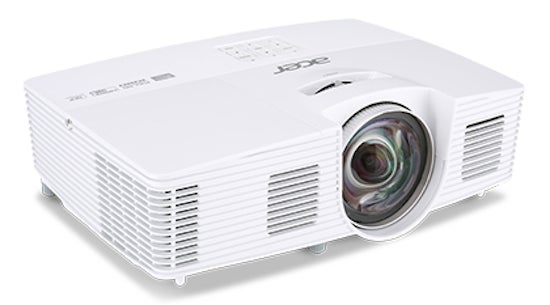 The H6517ST is fairly easy on the eye for such an affordable projector. This white box has a compact (314 x 223 x 93mm) but robustly built chassis, while its rounded corners and gently arced top and bottom edges give it a soft finish that’s well suited to living room use.

Its trim 2.5kg weight, meanwhile, makes it light enough to be easily carried between rooms, or moved in and out of cupboards when you want to use it.

The only negative in the design is the oversized lens, which feels like it’s been ripped off a much bigger projector and shoehorned into the H6517ST’s front.

While it might look awkward, though, the size of this lens does raise hopes for better image quality than I usually see from ultra-affordable short-throw projectors.

The remote supplied with the H6517ST is a solid effort in terms of its layout and size, but its lack of backlighting is a shame for a handset that will predominantly be used in a dark room.

The H6517ST doesn’t carry the best out-of-the-box picture presets, so it’s worth taking the time to tweak a few settings.

For starters, for dark-room viewing there are two potential picture presets that are worth a try. The Movie mode offers up the deepest black colours in conjunction with the projector’s Dynamic Black feature, but Dark Cinema Room provides more shadow detail in dark areas.

Personally, I settled on the Movie mode, since it felt slightly more cinematic. But feel free to lean the other way!

You’ll also need to decide whether to use the Dynamic Black feature. It certainly boosts picture quality, delivering deeper blacks and brighter peaks for a more contrast-rich image. But it also deactivates the projector’s low-brightness Eco mode, meaning you’ll have to put up with more running noise from the projector’s cooling fans. 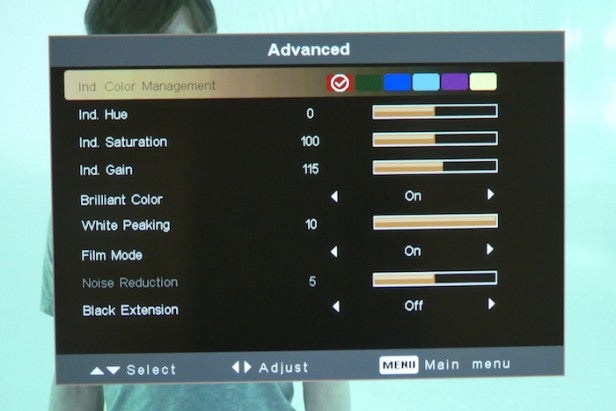 This decision is made even harder by the fact that the H6517ST runs extremely quietly in Eco mode, while it seems marginally noisier than average in Dynamic Black mode.

I couldn’t resist the extra picture “kick” achieved by the Dynamic Black mode, but the Eco mode may be preferable if you’re sat nearer the projector. Or are a fan of silent movies.

Looking elsewhere, the Black Extension feature is best avoided since it crushes out shadow detail in dark areas. I’d also strongly recommend that you leave the Brilliant Colour feature set to “on”, for reasons I’ll discuss in the Picture Quality section.

The H6517ST’s projection engine is a single-chip DLP system featuring a Full HD resolution – impressive for a sub-£500 short-throw projector. It’s also capable of pumping out an eye-catching 3,200 lumens of brightness, yet nonetheless claims a respectable contrast ratio of 10,000:1. 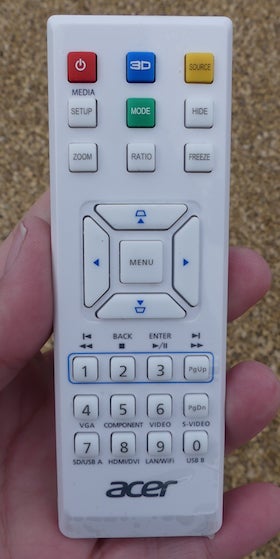 Connections are as you’d hope for in a projector that claims to have genuine home-entertainment skills. Two HDMIs are joined by a VGA PC input, a USB service port, and a composite video input. There’s also a 3.5mm audio input for feeding the H6517ST’s built-in speaker. This saves you from having to always find an external sound system whenever you want to watch a film or play a game.

Also convenient, given that many casual domestic users will want to project onto a wall rather than a screen, is the facility to adjust the picture presets to compensate for a variety of wall colours.

Much less convenient is the H6517ST’s lack of any optical zoom or vertical image shifting. Having said that, these features don’t tend to be as necessary with a short-throw projector as they are with longer-throw models.

One last feature of note is the H6517ST’s support for 3D playback. However, as is par for the course these days, the projector doesn’t ship with any 3D glasses – and I wasn’t supplied with any for this review.