What is the Acer Chromebook Spin 11?

We’ve seen quite a few Chromebooks hitting UK stores this past year, from a variety of manufacturers including Asus and HP. However, the most prolific producer of these online-only laptops is Acer, with more than half a dozen devices to its name.

The Acer Chromebook Spin 11 (or ‘R751TN-C0CG’) is a typical entry. For just under £400 you get a machine with basic specs and Google’s Chrome OS, which is designed for anyone who’s happy working with apps or in their web browser. 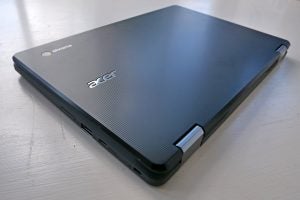 The Spin 11’s USP is its flexible design. That screen can bend right back until the Chromebook effectively turns into a tablet, which suits the touchscreen-friendly OS. So is that enough to recommend the Spin over rivals, and how does it compare in other areas?

Like most Chromebooks, such as Acer’s own Chromebook 14, the Spin 11 is compact. While it’s pretty chunky (20mm thick when closed), I had no trouble at all slipping it into my smallest backpack. At 1.4kg, it isn’t too hefty either, although you’ll find lighter models if you shop around.

Chromebooks rarely impress when it comes to design, offering little in the way of flair or frills. Acer certainly doesn’t buck that trend here. The Spin 11 gives off a budget vibe from the instant you clap eyes on its plastic lid with simple linear pattern. It’s an old-school look, not helped by that chunky finish.

Pull open the lid and the interior isn’t any more exciting; a plain matte finish is what awaits. I have no complaints about the durability of this device, however. The Spin 11 can soak up all kinds of knocks, bumps and scrapes, which makes it well suited to life on the road. It’s very much a grab-and-go type of device.

Those hinges are well designed, keeping the display firmly in position even when you’re jabbing it non-stop. And the Spin 11 transitions seamlessly between laptop and tablet mode, simply by swinging the screen all the way around until the lid touches the rear end. This automatically deactivates the keyboard, which is a blessing for sure — pushing those keys is unavoidable to get a good grip on the thing. 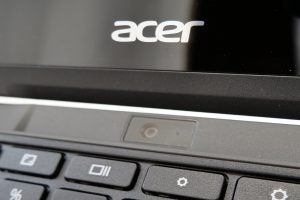 You get a pair of cameras with the Spin 11: one positioned above the screen, and another housed just above the keyboard (which faces outward in tablet form). These cameras are fine for Skype sessions, although you won’t see much more than a grainy mess in poor lighting conditions.

Connectivity is normally quite limited with Chromebooks, although Acer has served up sufficient ports here to satisfy. Two Type-A USB ports are joined by a pair of Type-C ports, split between the two edges.

You also get a microSD memory card slot, for expanding the 64GB of built-in storage, although this should prove plenty for apps and other bits – unless you download a load of games (note that only 45GB was actually available for use).

Acer has even added a volume rocker to the side, in addition to the dedicated media controls above the keyboard. Handy for when the Spin is in tablet mode. 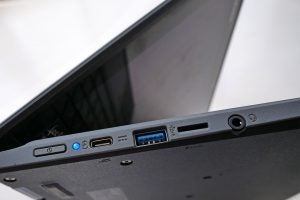 If you’re after a machine for smashing out lengthy essays or dozens of daily emails, the Chromebook Spin 11 will certainly satisfy.

The chiclet-style keyboard stretches almost entirely from edge-to-edge, making the most of the space on offer. Each key is well sized and spaced from its neighbours, and I was thankful not to have Page Down/Up keys crammed in alongside the cursor keys – which I always end up hitting by accident. The Return key is a wee bit squished over on the right edge, although at least it stretches over two rows so I had no trouble hitting it without glancing down.

The keyboard is firm throughout, with no hint of sponginess as you move towards the centre. And while there isn’t much travel on offer, especially given the thickness of this device, I found the Spin 11 perfectly comfortable to type on for hours at a time. 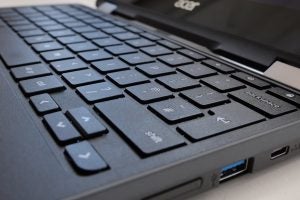 A row of dedicated Chrome OS controls sit above the main section, which is pretty standard. These allow you to quickly navigate through webpages and apps, change the screen brightness and so on. However, while you get dedicated volume controls here, there’s no button for pausing or skipping songs. Considering you already get a volume rocker on the side of the Spin, I’d much rather have those media options in place of the volume up/down controls.

Sadly, there’s no backlighting. If you want to type in the dark, you’ll either need to rely on touch or turn on a lamp. 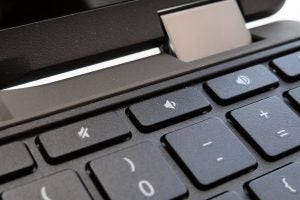 Acer’s touchpad is surprisingly spacious and works well, which is quite rare for a Chromebook. That smooth surface responds well to swipes, taps and multi-fingered gestures, without proving too sensitive. You can also poke the screen directly, since it’s touch-sensitive.

The Spin 11 comes bundled with a stylus pen, which is a comfortable and effective tool for sketching and making notes.

When it comes to Chromebook displays, my hopes always fall flat. These devices usually sport quite basic screen tech, to fit the low asking price.

Typically, the Spin 11’s 11.6-inch IPS panel is functional if not particularly inspiring. The basic HD resolution means visuals aren’t exactly super-sharp, although you can still happily watch your favourite shows without tutting over blocky image quality. Colours appear more impressive than on rival devices, although creative professionals will certainly want to boost their budget for realistic visuals. 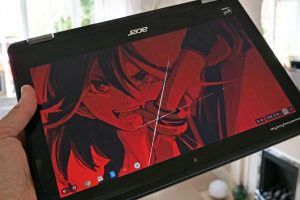 On maximum brightness, I found I could generally see what I was doing, unless I was trying to watch a moody flick such as John Wick on a sunny day. Darker scenes look murky and grainy, not helped by the poor contrast levels – so Marvel TV fans will struggle straight away. That backlighting isn’t quite uniform either, with images appearing brighter around the very edges.

Not surprisingly, the Spin 11’s audio output isn’t all that great either. For one, the dual speakers are positioned on the bottom, so any sound is immediately muffled by your desk or crotch in standard laptop mode. And even in tent mode for watching movies, the audio is aimed away from your face. 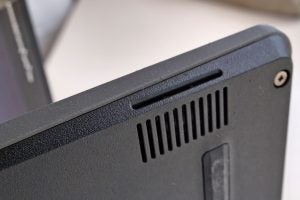 On top volume you can just about hear what’s going on in a noisy environment, but the tinny output is comparable to a budget tablet, so music sounds poor.

I’d recommend sticking with headphones, even though the port is rather ‘sticky’. I found that I had to force the jack all the way inside, before the Chromebook actually detected my headphones.

An Intel Celeron N3350 processor powers this Chromebook, backed by 4GB of memory. The result is basic performance, although nothing too painful.

Working in the Chrome browser is perfectly fine, yet simple tasks such as dragging apps around the desktop occasionally results in some serious stammers. I’d certainly recommend not having too many apps open at once, unless your patience is significantly greater than mine. 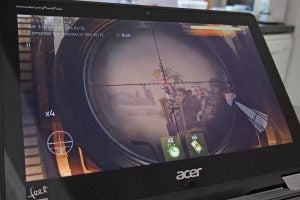 All the same, the latest Android games tend to be playable on the Spin 11. You’ll see the occasional frame rate drop, but nothing too shocking. And while I couldn’t perform the standard Trusted Reviews benchmarking, this Chromebook did spit out a score of 3736 in Kraken, which simply means it’s okay for web browsing. That’s better than many other Chromebooks around this price point.

One of the biggest advantages of rocking a Chromebook is the often ridiculously good battery life. This is a result of the low-powered components and slimline operating system. Thankfully, Acer’s machine doesn’t disappoint in this area, although it certainly isn’t the strongest device we’ve tested.

If you want a machine to last a full working day with mixed use, you’ll have no problems here. The Spin 11 typically lasts around eight to nine hours when using browser-based apps, so you can leave the charger behind whenever you hit the office. That’s lower than the ten hours Acer claims you get with this, but still not to be sniffed at.

Even when streaming Netflix non-stop, the Chromebook still manages close to eight hours of playback before giving up the ghost – good news if you’re off sick and you want to binge through a stack of boxsets. 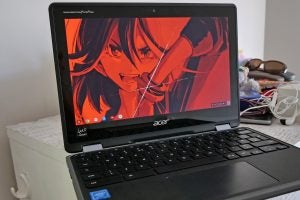 That said, while the Spin 11 almost matches Acer’s Chromebook 14 for battery life, some rivals such as Google’s own Pixelbook do offer an extra hour or two on top.

Why buy the Acer Chromebook Spin 11?

The best Chromebook right now remains the Google Pixelbook, yet the Spin 11 has its own advantages for something that’s roughly a third of the price. Mainly, that flexible design which allows you to transform the device into a tablet, with zero fuss. It’s a far from perfect setup, but it does the required job when you need a touchscreen device. 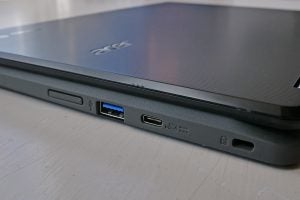 As with most Chromebooks, you have to deal with some limitations. Beyond that basic OS, performance on occasion is juddery, so you’ll want to limit yourself to quite simple tasks. However, the Spin 11 does offer a pretty good screen for the price, as well as strong usability. And as ever, the battery life is solid.

A 2-in-1 Chrome OS laptop and tablet that comes with the standard strengths and weaknesses a Chromebook offers.