It might not have gained as many plaudits as the iPhone 6S, but last year’s 5K 27-inch iMac was a revelation. While it looked identical to its predecessor, the pin-sharp screen was an enormous improvement.

Of course, the headline feature of the 2015 iMac is that 5K 27-inch display, to which Apple has made further improvements. It now comes with an even greater range of colours, thanks to the use of a new colour space more commonly used by film types in Hollywood.

All these components combine to make the best all-in-one personal computer you can get right now.

It’s easy to be blasé about the iMac’s all-metal-and-glass style. After all, it’s been around in this form since 2013.

That would be doing it a disservice, though. The iMac remains one of the best-looking computers you can have on your desk.

A metal stand holds up the screen and slim body, which manages to fit in a plethora of high-end components – including a discrete graphics card. The iMac isn’t a table ornament; it’s a workhorse, albeit a very pretty one. 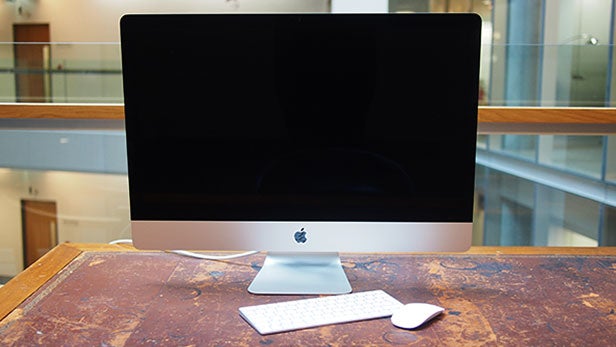 While the tapering rear is sleek, the screen bezels are chunky, especially when compared to more recent TVs and their impossibly thin bezels. This means it’s even bigger than it needs to be. And it is big, thanks to that 27-inch screen.

The stand enables you to tilt the screen up and down, but there’s no way to raise it unless you use a pedestal, which is a shame.

In order to keep the sides as thin as possible, Apple hasn’t included an optical drive. Those who desperately need one can buy an external USB SuperDrive. This isn’t quite as heroic as it sounds, however – it’s only compatible with DVDs and CDs, not Blu-rays.

There is a decent amount of connectivity, with all of it located on the rear of the iMac. There you’ll find an Ethernet, four USB 3 and two Thunderbolt 2 ports. The latter offers support for up to two 4,096 x 2,160 external displays, or a single 5,120 x 2,880 dual-cable external display in addition to the iMac’s built-in screen. 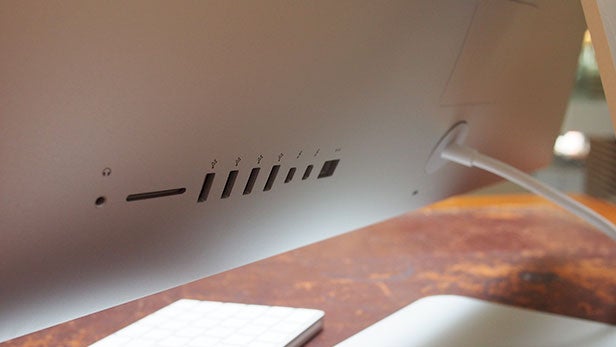 There’s also a SDXC card slot, for getting photos off your camera, and a headphone jack. Having to reach around the giant iMac to get to these isn’t easy, though, especially if you’ve chosen to position the computer against a wall or window. Bluetooth 4.0 and dual-band 802.11ac Wi-Fi complete the connectivity array.

The iMac comes with a pair of built-in speakers that offer enough volume to watch videos and listen to music comfortably. Hidden away in the back, they’re down-firing units that are actually pretty decent, especially considering how unobtrusive they are.

Finally, a HD FaceTime 1.2-megapixel camera can be found at the top for video calling. It’s a little underwhelming but still adequate for Skype calls. 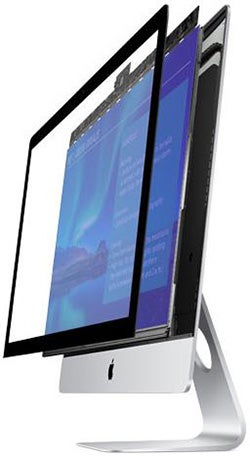 The 5K iMac is all about the screen. Apple has worked hard to make this display very special indeed.

Let’s start with some of the tech behind it. Apple has included an “organic passivation” layer that sits directly behind the pixels. Combined with the oxide TFT layer, this reduces the amount of crosstalk between pixels, ensuring there’s no pixel bleed and that the display is crystal clear.

But the main upgrade to the iMac 2015 is that it now supports a much larger colour gamut.

This has been used by cinemas since 2013, because it provides a larger range of colours – particularly reds and greens. In fact, it covers 100% of the colours you can see in sRGB, the most common standard for monitors, plus 20% more.

It also compares favourably with the wider Adobe RGB. DCI-P3 covers 93% of Adobe RGB, whereas Adobe RGB covers 87% of DCI-P3. DCI-P3 offers more of the red and green, where Adobe RGB does more with blues.

Both offer more colour choice over sRGB – the standard for almost everything on the web. Photographers, graphic artists and, in particular, videographers will appreciate the extra range the iMac offers.

All this results in the iMac 2015 having an incredibly natural-looking display, closer to reality when compared to any, hugely expensive, non-professional monitor I’ve seen before. In particular, switching between sRGB and DCI-P3 when looking at RAW camera photos is a real eye-opener.

I examined dozens of photos, playing spot the difference. Initially it was tricky to determine where the changes were – slightly better colour accuracy here, a little more detail there. The effects were far more pronounced with pictures dominated by reds and greens.

An image of some raw red meat barbecuing (apologies to vegetarians) showed far greater detail and texture in DCI-P3 that was blown out in sRGB. It was the same story in an image of a bright red parrot, where individual strands of plumage became visible. Similarly, green forest scenes were packed full of nuance and shades that just wouldn’t be visible on most other monitors.

This is a bright screen, too. At maximum brightness it delivers an enormous 480 nits, but most will want to tone that down to something more manageable. Far more comfortable for the eyes is a setting of 50% brightness, which offers 180 nits. 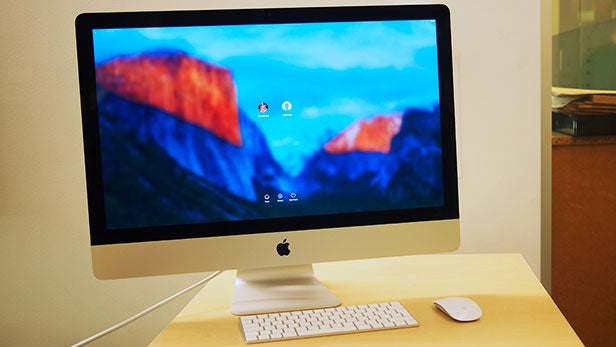 At this level colour temperature sits at 6,474K, which is only a smidge away from the 6,500K ideal – and it means the natural look of the screen and accurate whites are born out in testing. Contrast ratio, too, was impressive at 1,176:1, with the screen delivering plenty of detail in low-light images and video.

The impressive numbers don’t end there. A Delta E level of just 0.22 means that the iMac offers professional quality colour accuracy too. All this means that not only is the iMac’s screen the best you can get in an all-in-one, it is one of the best monitors you can get full stop.

If you’re into video editing then the high pixel resolution will be a real boon. It means you can edit 4K video in full resolution in a window, with all controls also on-screen. 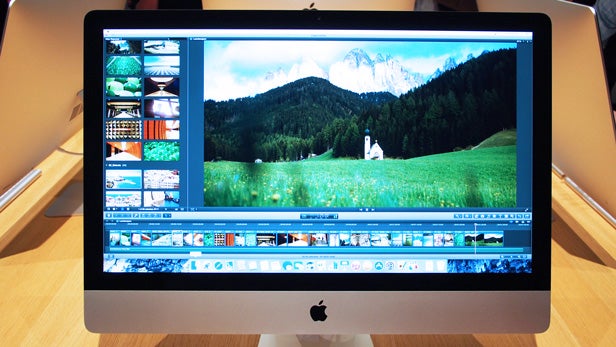 Note that the screen isn’t a matte panel, so there will be some reflections. However, it’s manageable and will be less of an issue for a desktop that won’t be moved around much.

Next
Performance, Heat and Noise Review