Introduction
Against all odds, pocket projectors are finally turning into products we might actually want to buy, rather than just being a great idea routinely let down by shoddy execution. And nobody is doing more to change our minds about this sector of the AV world than 3M.

The brand’s recent ultra-slim pocket projector rocket, the 3M MP220, found favour with us thanks to the way it managed to combine its tininess with a decent feature count and some surprisingly bright pictures. But if anything the 3M MP410 we’re looking at today is even more impressive.

3M MP410 Pocket Projector Design
For starters, it really is genuinely portable. It stands higher than the 3M MP220, but it’s much shorter and so can still very much be considered a pocket projector. To prove the point we comfortably tucked the MP410’s 10.16 x 10.16x 4.32cm, 375g form into both coat and suit pockets without suffering any unfortunate seam-ripping incidents. 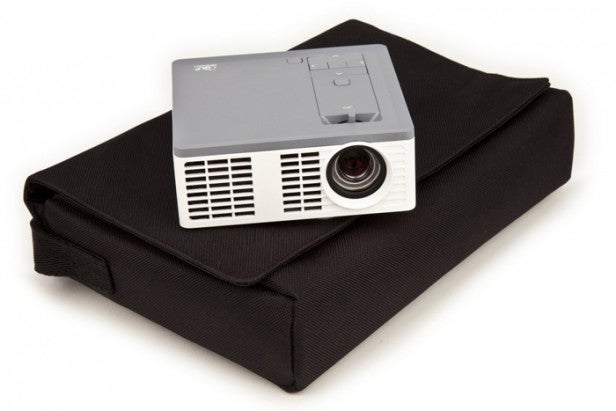 The 3M MP410 wears its smallness very cutely too, with its silver-hued top plate paired with white sides, rear and bottom. It’s perhaps a shame that the lens doesn’t have a cover built in, but it still feels robust enough to survive being slipped into your pocket without it suffering any damage.

If you want to treat it with more respect, though – which wouldn’t be a bad idea considering it costs not far shy of £500 – then fear not: 3M ships a surprisingly good padded carry pouch with the projector, complete with a strap-in section for the projector and the space to include such necessary connections as the projector’s power cable and whatever source connection cable you need. This pouch includes a short carry handle, but it must be said that it’s much larger than the projector, making it better suited to a briefcase than a pocket.

3M MP410 Pocket Projector Specs
Included as standard with the projector are the power cable, a (rather large) power adaptor, a user manual CD, a handy quick start guide, and a VGA computer cable. Lots of other connection cables are available to buy, though, including options for getting stuff off iPads and iPhones, and various AV options. Some of these require connection to the projector’s Universal I/O port, but there’s also an HDMI port built in, along with a 3.5mm A/V input, a USB port, and even a micro SD slot. 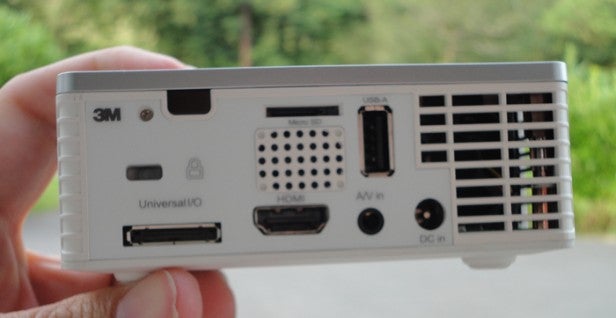 The 3M MP410 can also play back a variety of multimedia files from the SD and USB slots, potentially saving you from having to carry around a PC or AV source. File formats supported comprise JPEGs, BMPs, MP3s, MOVs, MP4s, H264s, AVIs, MKVs, DIVX, MPEG4, WMV, MP1, MP2 and WMA. However, rather surprisingly the MP410 does not support typical presentations formats – Word docs, Excel docs, Powerpoint presentations, PDFs or even plain .txt files – like the MP220 did. Which means many business users will need to transport their laptop or tablet with them after all. Shame.

3M MP410 Pocket Projector Features
There is, though, one handy little connection trick that makes this PC-connecting scenario easier to bear: Wi-Fi support. For while it’s not included for free with the projector, you can get a relatively inexpensive USB Wi-Fi dongle that allows you to connect with your sources sans cables. Another accessory you’ll probably want to invest in is a remote control. It’s again a pity one isn’t included with the projector as standard, but this is fairly common practice in the pocket projector world.

Turning to what’s going on inside the 3M MP410, it’s driven by a DLP/LED Pico projector system, as almost all pocket projectors are. What’s impressive for its size, though, is its promise of 300 Lumens of brightness. This is an eye-catching high figure for such a small unit, and will hopefully prove enough to avoid the horrible lack of punch, brightness and genuine contrast that has historically blighted so many pocket projectors.

Its native resolution, meanwhile, is a WXGA 1280x800p. As well as being ‘HD’, this is a widescreen resolution close – albeit not identical to – the 16:9 aspect ratio used in the TV/Blu-ray world. Together with the quoted brightness, this widescreen imaging gives the 3M MP410 more potential as a multipurpose device (home movie/slideshow projector as well as business presentations unit) than most pocket projectors.

3M MP410 Pocket Projector Performance
This potential is largely borne out by the 3M MP410’s performance, too. Utilising it first as a data display, we were struck right away by just how bright and dynamic its pictures look – even when pushed up to as much as 80-inches across in a dark room. This really is a substantial size for a pocket projector to still work well at – and even better its pictures also look bright and rich at 50-60-inch even in a fairly bright meeting room. This makes the MP410 right away a superior proposition for business users, given that few business folk really want to watch presentations in the dark. 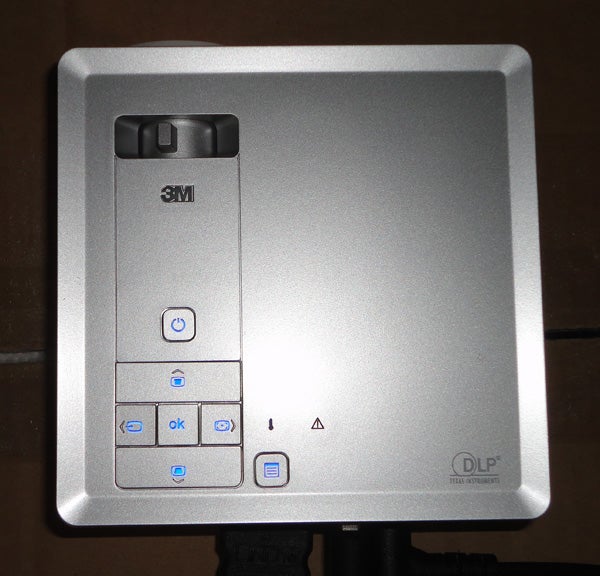 Colours are rich yet controlled too, doing great justice to your painstakingly created bar charts and graphs.

Data images also look reasonably crisp and detailed for the majority of the time. You can see a little scaling noise unless you set your source to exactly the same resolution as the MP410’s image chips, but this noise is never severe enough to stop text and numbers – however small they are – from being perfectly legible.

Given that most PC presentations are fairly straightforward in terms of the strain they put the MP410’s imaging system under, though, we were keen to run some HD video in through the HDMI to see if that caused the 3M MP410 more trouble. Actually, though, the exact opposite happened, for if anything we found ourselves even happier with its video performance than we were with its data performance.

Again the vibrancy and colour punch of the picture immediately hits you, injecting far more life and eye-catching dynamism into animated movies than any similarly small projector we’ve seen.

3M MP410 Image Quality
Blu-rays look superbly crisp and detailed too, leaving you in no doubt whatsoever that you’re watching a HD source on a HD imaging device. This in itself is a reason to rejoice given how soft video tends to look on most pocket projectors.

We were also relieved to find ourselves relatively untroubled by the DLP rainbow effect (stripes of pure colour flickering over bright image objects). You can see evidence of it over such things as flickering candles against dark backgrounds, but its appearances are reasonably rare and not especially potent even when they do appear. 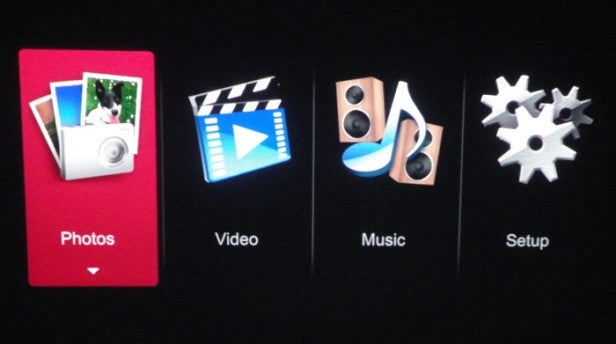 Perhaps the single biggest and most welcome shock about the 3M MP410’s video quality, though, is its contrast. For the washed out, milky, cloudy look dark scenes usually have on pocket projectors is replaced on the MP410 by surprisingly credible, dare we say cinematic black levels that also leave colours in dark corners looking more believable than usual. There’s even a bit of shadow detail to be seen in the darkest corners of the image, which is certainly something way beyond the capabilities of almost every other pocket projector we’ve seen.

Inevitably we’re not talking about a level of video precision that will have dedicated home cinema projectors looking over their shoulder. Colours while punchy and reasonably believable in tone lack subtlety in their rendering, leaving skin tones in particular looking a bit plasicky and the colour palette generally a bit limited.

There’s also more noise in video images than we’d expect to see on a more specialised video projector, and the unit’s standard definition upscaling isn’t very impressive. The speaker built into the MP410 is pretty inadequate for serious video use too, sounding very tinny and distorted when put under any sort of duress. 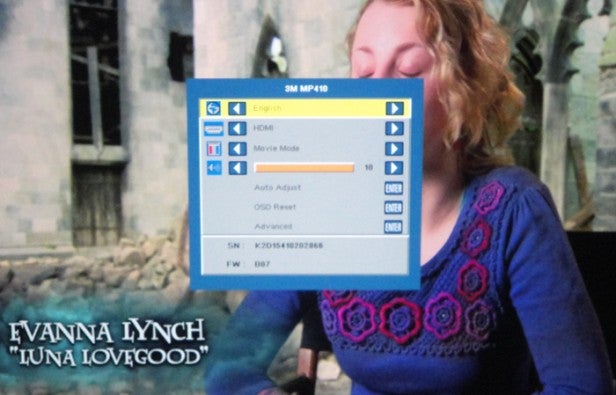 But actually the fact that we’re even talking in any serious way about the speakers built into the MP410 is a testament to the diddy projector’s unexpected prowess with video material. After all, normally video is nothing more than a fleeting distraction with pocket projectors, so inadequate are they at handling such fare. So the fact that the MP410’s video efforts are strong enough to have us wishing for better sound quality to go with them is an achievement in itself.

Verdict
Ever since we saw our first pocket projector we’ve been seduced by the idea of tiny light boxes capable of producing big images but have routinely been let down by the reality of the dull, soft pictures pocket projectors so often produce.

Finally, though, in the 3M MP410 we truly have a product that delivers our dream combination of a pocket-sized form factor and pictures bright and contrast-rich enough to not only be purely functional but also actually enjoyable. Well done, 3M. Very well done indeed.