Few brands are doing as much to overcome our innate scepticism about ‘pocket’ projectors as 3M. The remarkably small size and geekily appealing touch-screen interface of the 3M MP180 together with the built-in camcorder functionality of the 3M CP45 have made us understand why someone might actually want to own a portable projector.

So we’re actually quite excited today by the arrival today of the 3M MP220. Especially as this model is the first in the brand’s family of mobile projectors to offer a native widescreen (WVGA) resolution, immediately making it feel more in tune with modern computer and AV needs.

Big brightness, little chassis
The 3M MP220 also boasts a 65-lumen brightness figure on its spec sheet that’s very high for a projector which can genuinely be described as palm-sized (its actual dimensions are 32(h) x 81(w) z 157(d)mm) and only weighs 0.4kg. 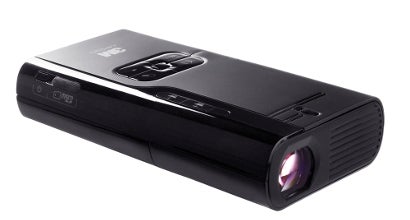 As with most very small projectors, the 3M MP220 can be powered by rechargeable battery as well as the mains, with the battery life rated at a pretty impressive 120 minutes. This isn’t enough to quite get through Titanic, but it should be enough for the impromptu slide shows or on the hoof business presentations that the MP220 is surely designed for. If two hours isn’t enough, then trust us: you really need to cut your presentation or slideshow down a bit…

Built-in memory
Another eye-catching trick of the MP220 is its 1GB internal memory, enough to store potentially a pretty extensive selection of photos or quite involved presentations without the need to attach any external laptop or camera source. You can expand the memory, too, courtesy of a microSD card slot positioned at the rear of its right edge.

Other connections include the inevitable DC input, a headphone jack (which can also supply audio to external speakers), a USB mini port, and a single small VGA/AV input port. It would have been nice, perhaps, to find a few more connections on the projector, such as a full-sized HDMI or composite video input. And it’s a shame that the VGA/AV adaptor cables are sold as optional extras rather than any being included as standard. But then maybe our hopes here are a little unreasonable when the projector is being sold for a decent-value £290. 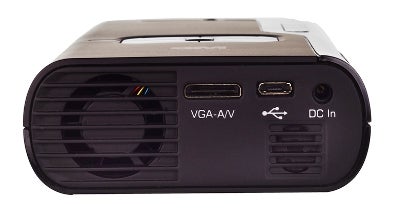 A very important fact about the 3M MP220’s AV input is its compatibility via the right adaptor both with Apple devices – iPads as well as iPhones – and, for the first time with a 3M mobile projector, Android devices. The projector even sports an Android interface which allows for a degree of personalisation.

Flexible friend
Other bit you can attach to the MP220 via the right cabling option include digital cameras, DVD/Blu-ray players, camcorders and game systems.

Being able to store documents in its petite body wouldn’t be much use, of course, if the MP220 wasn’t able to play them. So it’s a relief to find the projector shipping with the Documents to Go App pre-installed, allowing you to view Microsoft Office documents along with PDFs, videos, movies and photos.

Before firing the 3M MP220 into action, we should talk a little more about its design. Which is actually surprisingly drab. There’s no colourful LCD screen like you found on the MP180, with controls instead being reduced to simple hardware buttons positioned – rather randomly – around the body. It’s about as chunky, too, as a pocket projector could reasonably get without causing pockets to rip.

Mixed finish
The mix of a matt black top edge and gloss black bottom edge is marginally appealing, we guess, and we liked how the little quartet of control buttons on its top edge light up when the projector is on. But overall the MP220 looks a rather industrial bit of kit rather than something you’ll be especially keen to wave under the noses of envious friends. 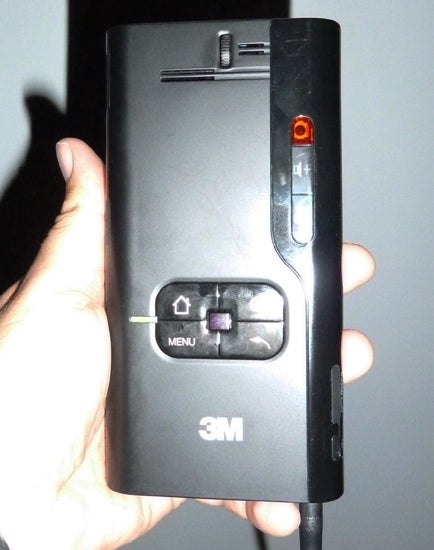 One positive thing we would say about the 3M MP220’s body, though, is that it’s extremely well built, making you feel confident that it will be able to travel anywhere  – and in almost any pocket or bag – without suffering any serious damage. We were also happy to spot a little screw hole in the middle of the bottom edge for attaching the projector to an optional but very useful tripod stand.

No remote
Powering the 3M MP220 up, the first thing that struck us was that it wasn’t particularly intuitive to use. There’s no remote control included for starters, which could prove problematic if you want to set off multiple presentations or onboard slideshows/movies without having to get up and physically walk over to the projector (You can get a remote as an optional extra, though.)

Also at first we couldn’t see anyway of moving around the Android-powered onscreen menus. Eventually we twigged that the small button at the centre of the main button cluster is touch sensitive, allowing you to slide your finger over it in the desired direction to move the onscreen cursor. This clever idea takes a bit of getting used to, but is ultimately rewarding.

Busy fans
The next thing we noticed was how hard the cooling fans inside the 3M MP220 appeared to be working. The way the whine of the fans keeps ramping up and down reminds us of an F1 car decelerating into and then accelerating out of corners. Except that, thankfully, while the cooling system certainly seems to be working hard, the actual fan volume levels produced aren’t really that loud. Certainly you don’t notice it once the action starts – especially if you’ve got any sound coming out of the speakers built into the projector. 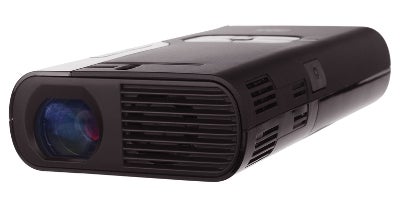 Happily the third thing we became aware of after powering the 3M MP220 up was the surprisingly good quality of its pictures. For starters they’re really bright by the standards of truly pocket-sized projectors – a strength which yields no less than three benefits.

The bigger picture
The first is that you can stretch the picture much larger – up to as much as 70in, in fact – without it losing so much brightness that it becomes unwatchable. This sort of flexibility is extremely rare from genuine pocket projectors due to their usually much lower light yields, yet is something we find extremely useful given that the whole idea of a pocket projector is that it should be usable in as wide a variety of circumstances as possible.

The second benefit of the 3M MP220’s impressive brightness is that it means you can still watch its pictures with a degree of light in the room – provided you’re not also trying to make too large a picture. This again is an important touch of flexibility for a projector likely to be used in meeting rooms, living rooms and even pubs rather than in completely blacked out rooms.

Packs a punch
The final and perhaps most obvious advantage of the MP220’s brightness is that it helps pictures look startlingly bold and punchy, especially when they’re running at relatively small sizes – up to around 40-50in. Colours look far more dynamic and rich than is usual with such small projectors, yet they also look quite balanced, with no tone standing out too strongly against the others. 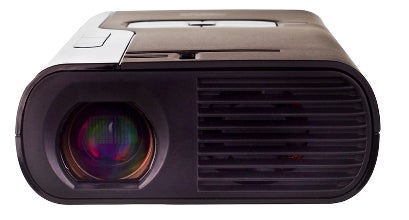 The punch of the 3M MP220’s colours also helps tones look more natural. Even skin tones seem quite believable for the most part, which is something that can be said of precious few other pocket projectors.

Sharp HD
Also very impressive is how sharp HD material looks when played through the MP220. There’s a palpable sense of ‘HDness’ in the amount of detail and crispness on show – and this doesn’t even break down significantly when the image contains a lot of motion. There’s actually no overstating just how impressive this aspect of the 3M MP220’s pictures is when we think about how soft and mushy pictures generally look on pocket projectors.

It’s good, too, to find colours staying within their correct boundaries when objects cross the screen, and that there’s no sign of the sort of dotting noise over motion sometimes seen with these sorts of projection engines. 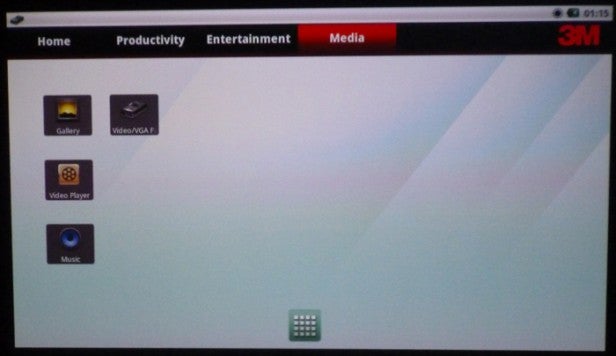 The 3M MP220’s main picture weakness is a predictable one: contrast. Dark scenes and dark parts of the picture look grey instead of black, meaning they don’t look as natural as bright scenes do. However, the extent of this greyness isn’t as severe as it is with most pocket projectors, and doesn’t stop dark scenes from containing at least a little shadow detail.

The MP220’s built-in speakers, meanwhile, prove more potent than those squeezed into most pocket projectors, producing a sound big enough and clear enough to be effective in even quite large rooms. Obviously you don’t get anything significant in the way of bass, but nor is there any nasty distortion at the treble end. All of which counts as a pleasant surprise for such a diddy machine.

Verdict
The 3M MP220’s looks might not set pulses racing as much as some pocket rivals, but it more than makes up for its aesthetic shortcomings with its build quality, the extent of its features, its flexibility, and best of all its picture performance, which comfortably outperforms expectations raised by previous experience with such small projectors.

Serious film fans won’t be happy with its lack of black level depth, we guess, but then the MP220 is fundamentally not targetted at that audience. For the sort of business and casual home users it is aimed at, this is a very attractive option indeed.