Swing Copters, the brand new game from Flappy Bird developer Dong Nguyen has landed on the iOS and Android app stores. Within hours, Swing Copters lookalikes started appearing on Google Play and the App Store, attempting to cash in on the game’s success before it had even launched.

And it’s easy to copy. Like Flappy Bird rotated 90 degrees, Swing Copters has a painfully simple premise – fly through the gaps between bridges and avoid the swinging hammers. Well, we say it’s simple, but the actual execution is also pretty painful too.

Tap controls are hard to master and the game is very unforgiving, taking you out even when you nearly touch the hammer or metal beams. Thus, death rates are so high, you’ll be wanting to chuck your phone out of the nearest window within the first 10 minutes of play, if you get that far. In the office, we’ve managed to achieve a collective high score of a measly 1.

I believe that Flappy Birds actually gained more interest when it was pulled from the app stores with the caveat that it was “too addictive”. Phones started appearing on eBay with Flappy Bird pre-installed and bidding prices started staggeringly high.

Perhaps Swing Copters is attempting to emulate the Flappy Bird success, with its free to play, ad-based revenue structure. But, we feel there’s a plethora of mobile games that are far more worthy of your time, attention and even money. 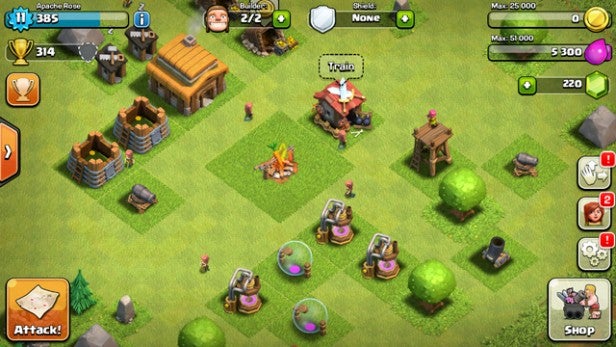 Clash of Clans exploded onto the mobile gaming scene back in 2012 and has since gained quite the following. If you haven’t played it yet, this free game will see you build up a little stronghold and defend it against the strong online community. You’ll need to collect resources like gold coins, gems and the oozy purple liquid in order to train new warriors and erect new buildings.

There are players that have been doing it for a long time, but there’s an easy learning curve for those new to the game. It has timed events, so you will find yourself constantly coming back to check in on your little town.

The Supercell graphics are also colourful and charming. Plus, despite its rather complex UI and gameplay style, it still works perfectly well on smaller phone screens. 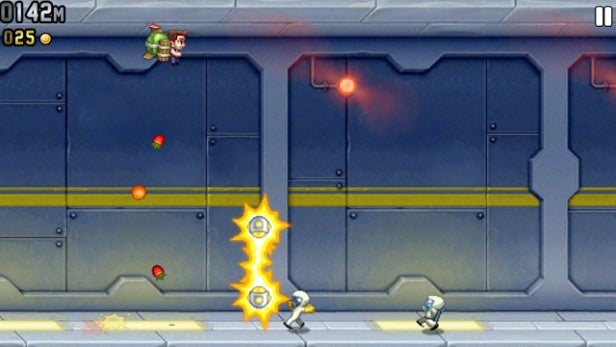 If you’re looking for something of a similar ilk to Swing Copters, Halfbrick’s Jetpack Joyride is an old favourite of ours. You play as Barry, a little chap with a jetpack strapped to his back trying to escape from a scientific testing facility. The main aim is to get as far as you can without dying, which can happen if you hit the roving laser beams or spike rails littered through the levels.

All you need to do is tap to go higher, or hold your finger down to scrape along the ceiling, or leave the screen well alone to have him run along the floor.

You go through collecting as many coins as you can. These can be used to upgrade your jetpack, buy him new outfits, gadgets, level perks and other goodies. Plus, for an extra level of gameplay there are constantly three missions to try and complete as you play.

It’s well worth a download. Plus, it’s free and you can play it for hours without being asked to spend any real dosh. 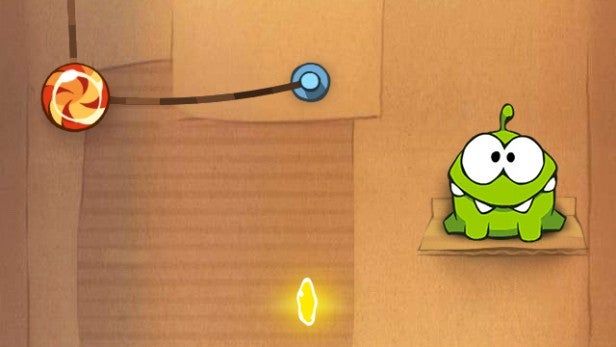 Developer Zeptolab has quite a few Cut the Rope titles under its belt so far. All can be downloaded for free with ads on the Google Play and iOS App Store. Combining cute characters, jocular sound affects and often brain crunching logic puzzles, you’ll find yourself engrossed in Cut the Rope regularly.

The basic goal is to get the candy from its starting position and into the mouth of awaiting monster, Om Nom. On the way, you’ll be tasked with collecting up three stars and bypassing each level’s various perils.

It’s a mobile gaming series we often go back to on train journeys, making sure our OCD is contented by collecting all three stars in each level. You’ll often be scratching your head trying to work out how to satisfy Om Nom’s hunger without destroying the candy. But the difficulty is at a level that makes it appropriate for a variety of age groups. 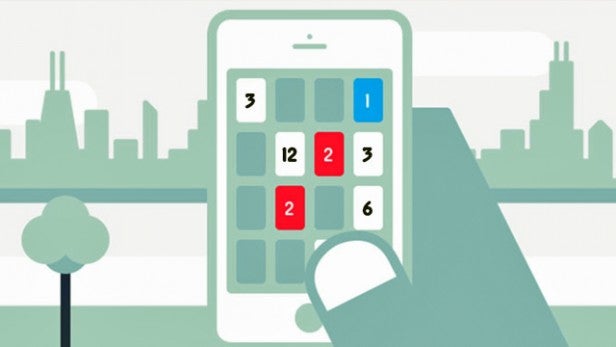 Threes! is a very simple game about matching numbers by sliding the screen in the appropriate direction. It takes about a minute to learn what to do, but once you’ve grasped it you’ll be addicted.

You’ll need to pair 2s and 1s and then the rest of the numbers you simply have to match up together. You can see what kind of tile is coming up next at the top of the screen, which often influences your swiping decisions.

What we particularly like is that each number tile has a unique personality and sound effects. It adds a little character to what could have been quite a bland game.

There’s no life limits, no in-app purchases and no goals apart from to get a higher score each time. It might sound boring, but there’s something really addictive about Threes and for a very good reason. 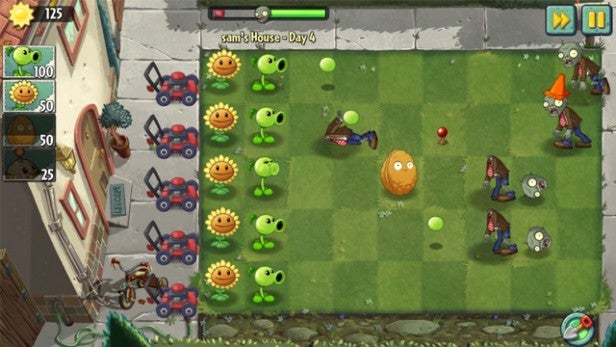 Plants vs Zombies 2 was the first in the series to be offered on a free to play basis. Yes, it does have in-app purchases, but it’s possible to play in completion without you needing or even wanting to spend any money.

As with the previous title, you are armed with an arsenal of plants with which to protect your garden (or other locale) from the oncoming zombie hordes. There’s some new faces in PvZ2, including our favourite the Bonk Choy – a feisty little plant with some mean close quarters melee attacks.

The gameplay has been ramped up a little in PvZ2, with power-ups and other meatier attacks to use if you’re feeling the pressure.

Overall, it’s got the same playability, quirky characters and it requires a certain amount of skill and logic, which will appeal to the more mature mobile gamers. 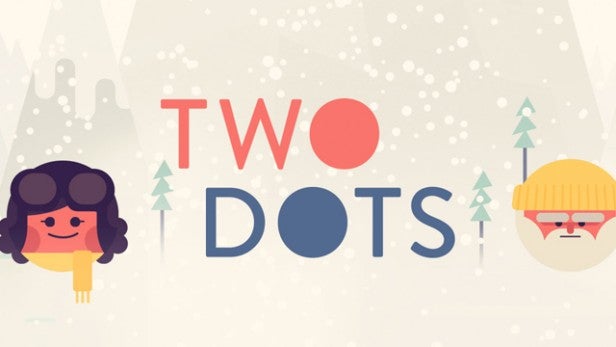 Developer: Beatworks One
Price: Free from the App Store only

If you’re an iPhone user looking for something to fill your morning commutes, there’s nothing better than TwoDots. Another game with a simple concept, TwoDots requires you to connect dots of the same colour with a line, as long as they are next to each other horizontally or vertically.

The ultimate aim is to create squares, which will then take out any other dots of the same colour.

Each level, and there are hundreds of them, has a different goal to complete. Whether that’s taking out a certain amount of each coloured dot, breaking ice patches or dropping anchors to the bottom of the columns, each has a totally different dot layout.

It requires a lot of brainpower to complete some of the levels, which are grouped into areas with a different theme.

You get five lives and one they’ve depleted you’ll need to wait twenty minutes per life for your stock to be refilled again. It’s quite good sometimes though, as it can be very absorbing and also frustrating.

The music is also pretty soothing for your morning commute, so we recommend donning a pair of headphones if you’re slow to wake up. 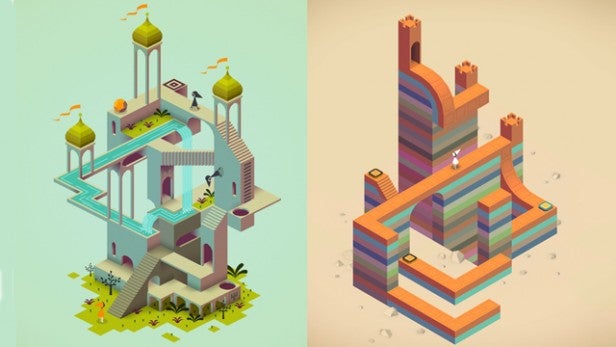 Developer: ustwo
Price: £2.49 from the App Store and Google Play

Monument Valley is a sublime example of mobile gaming. It originally launched as an iOS title, but has now spread its wings to the Google Play store too. It might cost you £2.49, but this logic puzzler is absolutely worth every penny. And just as proof, it sold over 500,000 copies in just two months on the App Store.

The game is inspired by the artwork of M.C. Esher and is absolutely beautiful both visually and audibly. You play as a silent princess called Ida, who is trying to collect artefacts that the Gods think she has stolen. It has a story that you’ll need to work out for yourself, but you’ll have to weave your way through 10 architectural puzzles before you do.

In each level, you’ll need to twist the building’s parts, rotate the worlds and bend your perception of space in order to take Ida from one door to another. You’ll be scratching your head at times, but once you’ve figured out the next path, you’ll appreciate the amount of detail and effort developer ustwo has put in. 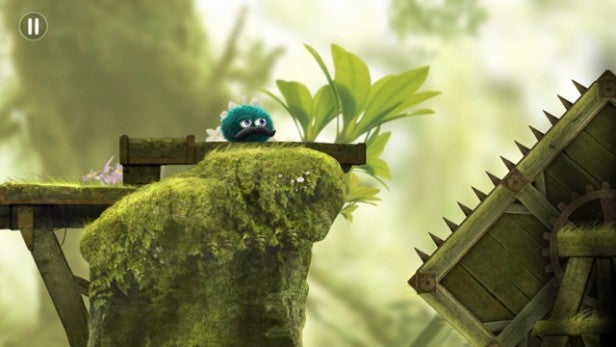 Finally, we get to Leo’s Fortune. This platform adventure will see you play as Leo, who is trying to track down a gold-stealing thief. Each of the game’s 24 levels is hand-crafted and the attention to detail is immense. You’ll travel through various locations such as mossy forests, deserts and snowy mountains.

The controls are fairly simple: swiping left and right on the left hand side moves Leo back and forth, while swiping up and down with your right thumb will inflate and deflate Leo to jump or to push down on switches and levers. If you keep him inflated across gaps, he’ll even float a little bit too.

It’s one of the most polished platformers we’ve seen on iOS and Android. If you don’t enjoy the story, soundtrack and slick touchscreen controls we’ll eat our hat.

For £2.99 it’s possibly a little too short, but if you’re serious about mobile gaming, Leo’s Fortune is up there with the best of them.