What is Plants vs Zombies 2: It’s About Time?

Plants vs Zombies 2 is the long awaited follow up to the very successful original game, but this time it’s been given a time travelling refresh. PopCap has reinvented its Plants vs Zombies title while still retaining the charm, comic elements and addictiveness of the original.

However, has its new free-to-play pricing structure ruined what was once king of the app charts?

Watch the Plants vs Zombies 2 trailer:

PopCap has completely changed the map layout for Plants vs Zombies 2, in an attempt to make it easier for you to replay your favourite levels. To begin with you are offered three themed worlds, each with their own levels, zombies and new plants to collect.

The new layout certainly makes it easier to view the world and the progress within it. Laid out in a W shape is the main story arc, but PopCap has now introduced challenge arms that offer you the chance to win new plants or player upgrades. These side quests offer different styles of gameplay to the norm, which certainly keeps the game feeling fresh even after hours of play. 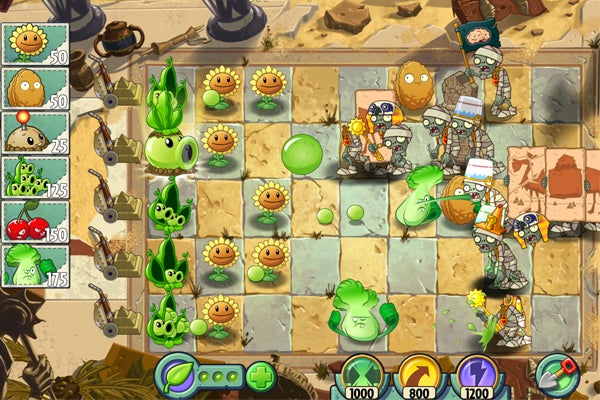 There are animated plants wiggling about on the maps too, which make them more visually appealing and mark where you gained that plant in the storyline or challenges.

At first you are offered three worlds – Ancient Egypt, Pirate Seas and the Wild West – all with their own menagerie of appropriately characterised zombies.

Ancient Egypt is the closest to the Pirate vs Zombies of old, with all five lanes of the ‘garden’ open to planting except for the mummy tombstones that rise out of the ground more frequently as you progress through the levels.
Pirate Seas cuts back the amount of full lanes available to just two, imitating the feeling that the piratical brain-eating zombies are trying to board your vessels.

The Wild West introduces mine carts that run on varying lengths of railroad tracks. Plants can’t be planted on the tracks, but they can be placed into the mine carts themselves. From there you can shift the plant’s lane to assist whichever other plants are being mauled by zombies.

In comparison to the first Plants vs Zombies game, PopCap has definitely greatly improved the graphics. Everything is clearer and sharper than before, beautifully presented right from the opening title menu through the world maps to the individual levels. 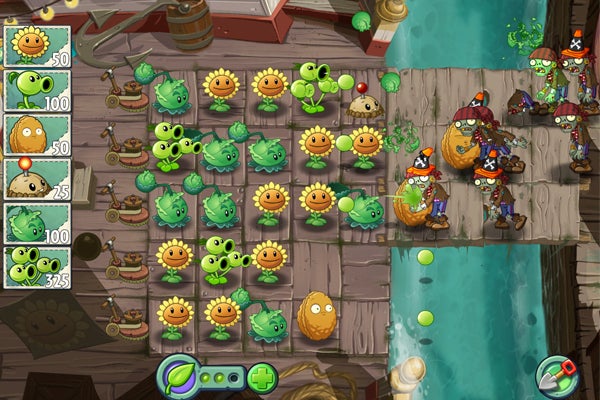 Thankfully PopCap hasn’t completely changed the tried and trusted game mechanics of the original game with Plants vs Zombies 2, choosing to expand rather than reinvent.

As with the original game, you’ll have to grow plants to defend your land against oncoming waves of quirky zombies eager to eats your brains. The majority of the classic plants are all there, along with the rather bizarre Crazy Dave, but with a whole host of new additions too.

As I have mentioned before, each world adds its own cast of appropriately costumed zombies. For example, the Wild West will see you battling against a grizzled prospector armed with lane invading dynamic, Pirate Seas will offer the Pirate Captain with all his crew and Ancient Egypt focuses on mummy zombies like the tomb-encased Pharaoh and Ra himself.

All the new zombie offerings are delightfully animated and memorable along with the new plant additions. Our personal new favourite is Bonk Choy, which is a powerful punching plant with limited range but mighty fists.

Speaking to Plants vs Zombies 2 UX Director Adrien Yorozu, her new favourite is the Chilli Bean that causes any zombie eating it to suffer a rather drastic bound of wind and keel over with the stench. 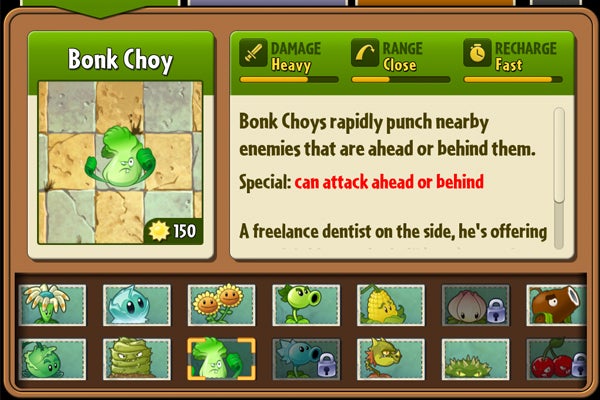 New zombies and plants aside, PopCap has added new features to change the gameplay in the main story arc. The first is Plant Food, a new feature that can greatly, if temporarily, improve your arsenal. Accrued during each level, or purchased for 1000 coins, this plant steroid allows you to momentarily upgrade your selected plant with a unique super attack. It’s very useful when the zombies are closing in and you’re close to being overrun.

Each plant has its own super attack: the Pea Shooter unleashes a concentrated burst of pellets that bombards the zombies with some force; the Cabbage-pult launches cabbages on every zombie currently invading the lanes and the Snapdragon rises out of the ground to reign fireballs of destruction down on surrounding enemies, just to name a few.

Plant Food definitely adds another layer of tactics to consider in Plants vs Zombies 2, also coming in very handy in the rather challenging side quests offered.

Next
Gameplay and Verdict Review