SteamOS is being released to the public today in download form, and the first Steam Machine units are being sent out to gaming geeks across the world for real-world testing. But what is SteamOS and should you be excited about Steam Machines? Here’s a primer on everything you need to know about Valve’s latest innovations.

SteamOS is a gaming-centric operating system made by Valve, the developer/publisher behind games like Half-life 2 and the proprietor of Steam, the biggest digital games portal in the world.

The system is designed to offer an experience that bridges the divide between PC gaming and the more relaxed style of console gaming, and to try and bring back the ‘PC games’ (i.e. non-console) audience, which has gradually eroded over the last decade.

SteamOS is a free download, and is a complete, Linux-based system that you’ll need to install on a ‘Steam Machine’ that hooks up to your TV (or a monitor). Any PC can run SteamOS and Steam Machines will play games, but they can also stream games from your high-power desktop PC to your TV, via the Steam Machine and your Wi-Fi network.

Native games compatibility isn’t going to be anywhere near as good as it would be on a standard PC, though, as Steam Machines are based on Linux rather than Windows. You can find out which Steam games support Linux on the Steam website. They include favourites like Counter-Strike, Football Manager 2014 and Garry’s Mod, but the selection right now isn’t great.

The idea, however, is that the rise of Steam Machines will eventually improve Linux support in the games industry. It has a long way to go at present, but Valve promises native support for triple-AAA games in the future as it attempts to woo big publishers to make their big PC releases work on Linux and by extension SteamOS and Steam Machines.

What do I need for SteamOS?

SteamOS will see several manufacturers make a bunch of different Steam Machines – computers designed with the SteamOS specifically in mind. However, you don’t need such a machine to get up and running.

As SteamOS runs on the same x86 architecture as Windows, so you can turn just about any modern PC into a Steam Machine. If you have a media box PC, it’s likely you’ll be able to convert it into a Steam Machine using the SteamOS download available from Valve’s website. We’ll be back with more on how to do this soon. EA is unlikely to invest hugely in Linux ports if the public doesn’t invest in SteamOS, so the more people who do this the better.

What else can I do on SteamOS besides play games?

Although primarily a game-playing operating system, SteamOS will also support media streaming services. We expect things like Netflix, iPlayer, 4OD and LoveFilm will all eventually be accessible using a Steam Machine, although not at launch.

You won’t need to stream these from another PC elsewhere in the house, either.

What is a Steam Machine?

The term Steam Machine is a Valve creation, something that makes the hardware required to run SteamOS more marketable, and less vague. PCs not specifically labelled as ‘Steam Machines’ can also become such things with a bit of software tinkering. However, it’s likely that all computers sold as Steam Machines will have been made in association with Valve to some extent.

It’s not yet clear whether there’s a strict set of minimum requirements for any of these new SteamOS-specific boxes. However, given Valve is aiming for accessibility to some extent, it’s unlikely that a high-end graphics card will be mandated. Those things are expensive.

How will I control a Steam Machine? 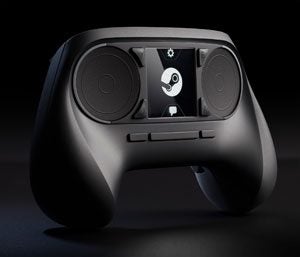 Steam Machines, and Steam OS, will be operable using a mouse and keyboard. However, Valve has also devised a clever and rather unusual controller designed just for the system.

Its shape is somewhat like an Xbox One controller, but the actual control surfaces and layout are quite different.

There are two circular trackpads on the front, whose input will be similar to that of two analogue sticks (but with greater accuracy potential).

The front buttons are arranged around these pads, and there’s a third touchpad in the middle. This is clearly a pad that wants to offer a better first-person shooter experience than a console gamepad.

Like a normal gamepad, there are standard triggers on the top of the controller.

When can I get a Steam Machine or Steam Controller?

Although the release date of SteamOS is 13 December, this is still early days for the system. Prototype Steam Machines and Steam Controllers are being sent out to 300 beta participants to QA the system.

You need to bear in mind that Valve is a very different company from the games parts of Sony and Microsoft. Its more open approach is great, but means there’s not quite the same style of singular release date where everything is (more or less) ready for public consumption. Early adopters of SteamOS need patience.

None of the beta units are being sent out of the US, either. So if you want to be among the first to try out SteamOS, you’ll need to get your hands dirty and install the software yourself. We’ll be back soon with more on how to do this.

How much will a Steam Machine cost?

There is no set price for a Steam Machine. Unlike an Xbox One or PS4, it’s not a singular thing. And they’re not all made by the same company.

Steam Machines will be available at all sorts of prices. But those designed for native gaming, rather than game streaming, will be fairly expensive.

The first Steam Machine to be announced was the iBuyPower box, which is set to sell for £499. It has a multi-core AMD CPU and AMD Radeon R9 270 graphics card. It costs as much as a next-gen console, but when the graphics card alone sells for around £150, that’s no surprise.

The second one we saw was a Steam Machine from Digital Storm, set to cost over $1100. You can expect to pay a grand in the UK for such a box. That’s more than twice the price of a next-gen console. And it’s not yet clear whether there’ll be a massive influx of games you’ll be able to play on it natively.

Details of these Steam boxes are obviously subject to change – their makers are clearly savvy to the idea that they can drum-up interest simply by stating their intention to make SteamOS products. We’ll get our hands on as many Steam boxes as we can at the CES 2014 show in January.

Is SteamOS the future of home gaming?

SteamOS arrives at a very interesting time, just as console gaming gets a shot in the arm with the release of the Xbox One and PS4.

The platform has significant issues to combat, both technical and in terms of its messaging. Will Linux support be improved enough to make a high-end Steam Machine be worth buying? Is the controller any good? Will normal gamers ever really understand what a Steam Machine is?

SteamOS has a tricky time ahead of it if it wants to eat into the console audience, but Valve has a history of pulling off tricky feats like this. Many ridiculed the Steam platform when it was introduced, but it has become a huge success, becoming the place where three-quarters of all digital games are bought. This success gives Valve a lot more power and opportunity to make SteamOS and Steam Machines a success.