LG recently became the third-biggest mobile phone maker in the world. Rumours of its demise as a major player in the phone game have clearly been overstated.

The new LG G2 is the company’s big, bright Android hope for 2013, and it goes head-to-head with the Galaxy S4 – the most popular Android phone of the year. But is it better? Let’s compare their vital statistics.

Thanks to its slightly larger screen, the LG G2 is unavoidably a tiny bit bigger than the Galaxy S4. However, looking at the width of the two phones, LG has put a lot of design trickery into the G2.

The phone is just 1mm wider than the Galaxy S4, thanks to the razor-thin bezel areas that sit to the left and right of the display. Why does this matter? Phone width is the biggest concern when thinking about the usability of giant phones like these. A phone that’s hard to gasp is no fun to use. 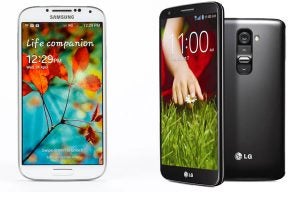 Elsewhere, the specs lean more significantly in the Galaxy S4’s favour. It’s a full 1mm thinner than the LG, and 2mm shorter. You’ll notice that thinness, but only the most pedantic of phone buyer will worry about having a phone 2mm longer.

Weight-wise, these phones are fairly similar in practical terms – the LG G2 is just over 6g heavier.

Their design styles are pretty similar too. Both have glass fronts and plastic rears, and use visual textures on their backplates while still keeping the feel of smooth glossy plastic – which we’re not huge fans of.

There remain some pretty significant differences, though. Where the Galaxy S4 has a physical Home button, there are no front buttons on the LG G2 at all. There aren’t even any side buttons. In a slightly alarming feat of design oddity, the power, volume an camera shutter buttons sit on the rear of the phone, by the camera lens.

They’re here to make taking selfies easier (they’re photos of yourself for those of you over the age of 16), although we need to spend more time with the LG G2 to make sure the buttons won’t be a pain in other situations.

In an obvious case of tech one-upmanship, the LG G2 has a slightly larger screen than the much better-known Galaxy S4. It trumps the Samsung phone by 0.2 inches, with a 5.2-inch screen instead of a 5-inch one.

That LG has managed to squeeze in a bigger screen without making the phone significantly wider is one of the G2’s most important calling cards. And although both phones use the same 1080 Fuhh-HD resolution, there are easily enough pixels going around to make pixel density a non-issue.

If anything, the LG G2’s screen will appear sharper. The Galaxy S4’s Super AMOLED screen uses a less uniform sub-pixel array than the G2’s super-uniform IPS-plus panel – however in practical terms both phones are as sharp as you like, and offer the ‘Retina’ effect where you can’t see individual pixels. 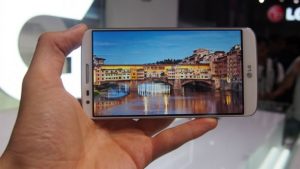 The character of these two screen types is quite different. Super AMOLED panels are all about being rich and vivid, but can often appear oversaturated. Samsung offers colour saturation settings that you can fiddle with, but even with the least vibrant of the lot the Galaxy S4 still treads the line between ‘vivid’ and oversaturated.

The LG G2’s IPS panel has a much cooler, more natural look – without trading the ‘wow’ factor we expect from a top-end smartphone screen.

Both screens are great, but image quality purists are likely to prefer the LG G2’s screen.

The LG G2 is a generation ahead of the Samsung Galaxy S4 in terms of raw processing power. Both phones have 2GB of RAM, but the CPU and GPU are both more powerful in the LG phone. And even the RAM is faster in the LG G2. 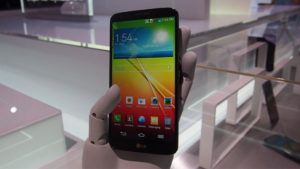 Architecture optimisations and faster memory mean the Krait 400 is a significantly better core to work with – even if both are based on 28nm architecture. The new GPU type is also extremely important.

The LG G2 uses an Adreno 330 GPU, the Galaxy S4 an Adreno 320 GPU. The newer version can output in 4K (not essential, but a nice bit of future-proofing) and is twice as powerful as the Adreno 320 according to its maker.

It’ll be a while before we see developers make games that really make use of the extra power of the Adreno 330, but it’s sure to come in handy once the iPhone 5S comes out (it’s the phone that leads mobile gaming development, so the Snapdragon 800 needs to keep up with whatever it ends up packing).

The LG G2 is an extremely aggressive phone, out to trump its biggest rival the Galaxy S4 where it can. In its camera, this aggressive approach is clear in its adoption of optical image stabilisation.

This is the first 13-megapixel phone camera to use optical stabilisation, which is primarily useful for producing in-focus shots in lower-lighting conditions. How come?

In order to produce photos that aren’t a complete mess of noise in low light, a camera needs to increase its exposure time. Any movement in the person shooting during this window results in blurred images, but OIS tries to counter these movements. The exact workings of LG’s OIS system have not yet been revealed, though, so we’ll have to wait to see how effective it is in use.

With good lighting, we expect the phones to produce shots of comparable quality. And so far it seems the LG G2 may be a tiny bit quicker to shoot photos. However, we’ll update this article with more in-depth comparisons once we get to take the two phones out for a photographic spin.

So far, LG seems to have managed to trump the Samsung Galaxy S4 on a number of fronts. It’s impressive work. However, Samsung gains back some ground in software.

The LG G2 and Galaxy S4 both use variants of Android 4.2 – it’s the manufacturer-made custom interfaces that matter here. In terms of approach, LG UX interface and Samsung’s TouchWiz are pretty similar. They’re busy-looking and try to pack in a bunch of additional features – TouchWiz more so on the latter.

Neither is all that pretty, but the LG interface looks more dated and, being frank, slightly naff. LG’s icon design fits in well with lower-end and mid-range phones, but on a smartphone colossus like the G2 it just doesn’t feel right.

Extra features the phones offer include control over your home entertainment devices using the integrated IR blaster, and running two apps on one screen.

Although similar in style, the Galaxy S4 has a the clear advantage here.

Like HTC did with its One phone, LG has decided not to include a microSD memory card slot in the G2, even though the removable back cover would have made doing so pretty simple. Instead, you get 32GB of internal memory and that’s it.

Typical of Samsung’s approach to its phones, the Galaxy S4 has a memory card slot and there are several different storage variants. There are 16GB, 32GB and 64GB editions of the phone, but good luck finding the top-end one in the UK. You can find the phone on eBay, but the majority of UK retailers only stock the 16GB edition. 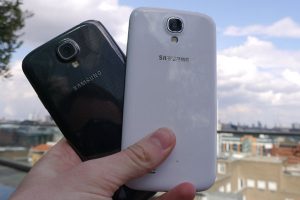 Why? You can get the additional storage with a memory card for far cheaper than the price difference between the 16GB and 64GB devices would be.

LG has successfully played a game of tech top trumps and won – in most fields – with the LG G2. It has a bigger, arguably marginally better, screen, much more power on tap and more advanced camera hardware. However, the questionable interface at its core leaves the LG G2 with a hint of the ‘all the gear, no idea’ vibe about it. If it arrives at a similar price to the Galaxy S4 when it hits stores, though, it’s a tech head’s dream.

Next, read our Galaxy S4 vs HTC One comparison