I’ll admit it, the iPad vs PC debate is a tired one, but new evidence suggests it should be back on the table.

With a brand new version of the world’s most popular operating system, Windows 8, gearing up for launch, many would expect that the PC market (both desktop and laptop) is set for an increase in sales after a steep drop in 2011. However, with the iPad 3 and wealth of Android tablets out there it appears that the market may be shifting permanently.

Gartner has published a report showing the worldwide year-on-year decline of PC sales is at 8.3 percent, with US reports looking even grimmer at 13.8 percent. These results are preliminary but they do provide a strong indication as to final figures, and they are worse than many expected. The figures also only count desktop PCs, netbooks and all forms of laptop but, crucially, leave out tablets.

It’s good news for some manufacturers like Lenovo, which became the largest PC shipper for the first time, overtaking HP and growing by almost 10 percent, while Asus also showed strong growth. However, the picture is much less rosy for the US manufacturers HP and Dell, as well as for Acer which saw a 10 percent drop. 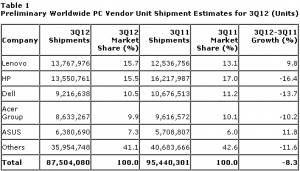 Mikako Kitagawa, a Gartner analyst, explains that the imminent launch of Windows 8 should be taken into account when looking at these figures:

“The third quarter was also a transitional quarter before Microsoft’s Windows 8 operating system release, so shipments were less vigorous as vendors and their channel partners liquidated inventory.

“Retailers were conservative in placing orders as they responded to weak back-to-school sales. By the end of September, retailers were focused on clearing out inventory in advance of the Windows 8 launch later this month,”.

Blaming retailers for pining after Windows 8 and manufacturers for not shipping as vigorously as they could seems an oversimplification of the matter. These factors cannot fully account for such a steep drop. Others also need to be considered. Regardless, though, should there be an air of optimism surrounding the Windows 8 release? Can it really reverse the downward trend of the last 2 years and reinvigorate the PC market once more?

Traditionally PCs sales have shown strong growth after the launch of a new Windows version. History alone does not guarantee success, however. The growth of the tablet market, and particularly the tremendous sales of the iPad, could significantly impact the level of bounce back we’ve come to expect.

Ofcom reports show that, in the UK at least, tablet ownership rose by more than 500 percent from 2011 to 2012, with further increases added by strong sales of the Google Nexus 7 and other Android devices. It’s the iPad that dominates, though, with 57 percent of all tablets sold manufactured by Apple.

Do strong indications that the iPad Mini is readying itself for launch ring yet another death-knell for the PC? According to these reports, yes, it does. More than a third of people surveyed said they use their laptops and desktops less since purchasing a tablet. This suggests that tablets are not considered a complementary device to a PC, but are in fact becoming a serious alternative for mainstream consumers.

The evidence against a PC bounce back further mounts when you consider Windows 8 as an operating system, and the innovations it offers over Windows 7. Part built for touch screen and part for keyboard and mouse use, Windows 8 is a hybrid, the first fully-blown Windows OS not designed exclusively for PCs (if we exclude Windows Mobile). It seeks to bridge traditional PCs and tablets.

Even more damningly Microsoft has got in on the action itself with the imminent arrival of the Surface, a tablet with a detachable keyboard cover. This is a device with the portability and ease of use of a tablet that also grants owners the ability to work productively, as they would with a desktop or laptop.

Many before me have prematurely proclaimed the demise of the PC, whether because of the launch of the last-gen connected consoles, increasing smartphone adoption or the growth of the tablet, but it was never likely to be quick. PCs are still one of the best productivity tools in existence and certain gamers (myself included) will always want the cutting edge experience that only PCs can provide. However, what is apparent is that other types of devices are catching up quickly and you could look at it another way – the PC isn’t dying it’s just evolving. Convertible tablets such as the Asus Transformer Pad Infinity, Lenovo Ideapad and Surface may well simply be the next step in the process.

Do you think we’re seeing the end of the PC as we know it or is there life in the old dog yet? Let us know below.