What is the Surface Pro 3 all about?

The Surface Pro 3 is the third generation of Microsoft’s hybrid tablet. It’s a full Windows 8 PC with the same internals as an ultrabook, but in a hybrid format designed to make it work just as well in tablet modes. But is it enough of a move on from the Surface Pro 2, last year’s version? We compare the two to find out.

Head to our Surface Pro 3 review for the full, in-depth review

Pro 3 swaps a Wacom stylus for an N-Trig one

There are lots of improvements in the Surface Pro 3. But there is one significant negative you may not have considered yet.

The tablet uses an N-Trig digitiser stylus rather than a Wacom one, as used in the Surface Pro 2. In practical terms the main difference is that the Surface Pro 3’s stylus needs a battery where the Surfae Pro 2’s does not. But it also has fewer levels of sensitivity at just 256 vs the 1,000-plus of the Wacom-based Surface Pro 2.

In our review of the Surface Pro 3 we found the new pen is more direct and more accurate at the extreme edges of the screen. The Wacom-based Surface Pros tended to suffer from a slight offset between where the nib was pointed and the actual input and didn’t work well in the the corners. The Surface Pro 3 doesn’t suffer from these problems.

This makes the Surface Pro 3 much better for note-taking and handwriting on the screen. But the reduced pressure sensitivity could put off digital artists. 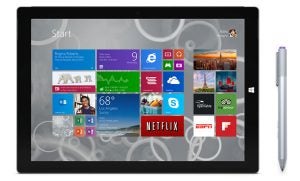 Surface Pro 3 has a larger screen

The new Surface Pro 3 is a good deal larger than its direct predecessor the Surface Pro 2. It has a 12.1-inch screen, to the Pro 2’s 10.6-inch display.

In moving to this larger size, the Surface Pro 3 is able to separate itself from rival non-Windows tablets, the biggest names of which have been much more successful than any Surface tablet. Larger size also arguably makes the Pro 3 much more viable as a laptop-replacer.

In practice the new screen totally transforms the Surface Pro 3. Previous Surface Pros always felt a little awkward due to their widescreen aspect, but the Surface Pro 3 works better both as a laptop replacement and as a tablet thanks to the squarer screen.

This one change makes the Surface Pro 3 significantly better than its predecessors, and that’s before you factor in its higher resolution. 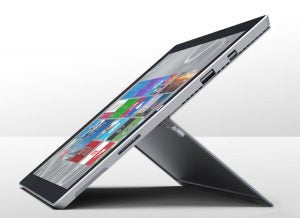 So let’s tackle that topic. Along with making the screen larger, Microsoft has also improved resolution. The Surface Pro 2’s screen was 10.6 inches across and 1080p in resolution, giving pixel density of 208ppi.

Microsoft’s new model has a 2,160 x 1,440 pixel display, which equates to 214.5ppi. It’s not a great deal sharper than the Surface Pro 2, but does offer slightly higher density and certainly doesn’t lose out on the sharpness stakes thanks to its larger display.

This increased resolution is arguably less important than the change in aspect, but the screen on the Surface Pro 3 is very good. Not only is it sharp, it also has good contrast and is very bright. It’s a great screen.

Pro 3 is slimmer and lighter

The Surface tablets have never been renowned for their super-slim, light frames. This was particularly true of the former Pro models, because they used much more serious internals than most of the tablets perceived by some to be the series’ main rivals.

Microsoft has clearly put some effort into improving things, though. The Surface Pro 3 weighs just 800g, lighter than the last model even though it’s a good deal larger.

Dimensions are pretty impressive too. The Surface Pro 3 is 9.1mm thick, down from 13.5mm in the Surface Pro 2, and Microsoft has cut down the screen bezels a bit too.

In use, the Surface Pro 3 feels impressively slim and light for such a large device. Indeed it’s size, not weight, that’s the greatest obstacle. Its size means the Surface Pro 3 doesn’t fit well in tight spaces, such as small tray tables on planes and trains.

It’s a fine laptop replacement when sat on a normal desk, but it can’t beat a laptop in every environment. 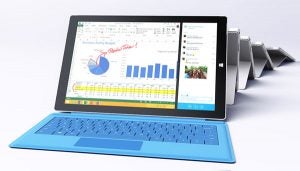 Louder speakers this time around

Speakers are often neglected a bit in tablets and laptops – presumably under the notion that they are never going to sound good. But Microsoft has made significant improvements in this area.

It claims the Surface Pro 3 speakers are 45 per cent louder than those of the last model. The speakers are found on the front, their grilles hidden behind tiny little cut-outs in the sides of the tablet’s screen, rather like those of the Sony Xperia Z2 phone.

Microsoft isn’t making idle boasts, either. While the speakers are not significantly better than any you’ll find on an iPad or similar tablets, they’re huge step up from the weedy speakers on previous Surface Pros. They’re right at home when watching Netflix in bed.

One of the most important practical improvements in the Surface Pro 3 is in battery life. Microsoft claims it will offer up to 20 per cent better stamina than any Surface tablet to date.

Even accounting for small differences in background processes and screen brightness, it’s clear that the Surface Pro 3 isn’t a huge improvement in this area. It’s still pretty good, though, so there’s no reason to get too upset about this result.

Microsoft couldn’t really announce a Surface Pro 3 without making it a fair bit more powerful than the Surface Pro 2. It’s doubly important in a tablet like this as, unlike an iOS or Android tablet, a full Windows device can make good use of whatever power you put at its disposal.

However, you won’t see jaw-dropping improvements in the third-generation model.

It’s not Microsoft’s fault – the Haswell processors used in the Surface Pro 2 are still current models. The Surface Pro 3 uses the same generation of processor.

However, where the Pro 2 uses an Intel Core i5-4200U chip, the top Pro 3 gets an upgrade to a Core i7 CPU. Microsoft says the performance improvement is just 10 per cent, but that may refer to the i5 edition, which uses an i5-4300U CPU.

There is also a Core i3 version, which starts at just £639. All versions of the Pro 2 used i5-type chips.

Next, read our best Windows tablets and laptops round-up

Size changes and tech improvements aside, many of the core ideas of the Microsoft Surface Pro 3 are taken from the Pro 2. It’s a serious device that can double as a laptop, while having a bit more fun as a tablet on the side.

Both tablets have an integrated kickstand and both include an active pen stylus,  both offer storage options between 64GB and 512GB. And the Pro 3, like the Pro 2, is almost certainly won’t sell in iPad-like numbers.

What’s clear now we’ve reviewed the Surface Pro 3, though, is it’s a serious step up from previous versions. If you own one of those, or have always been tempted by them, the Surface Pro 3 is a sound investment.