As expected the iPhone 5S has arrived with improved features to help make it more desirable than the iPhone 5. Is it any match for the current best Android phone on the planet the HTC One?

We take a look at the specs and features to find out if you should be going for the iPhone 5S or opting for a HTC One.

iPhone 5S vs HTC One – Design

iPhone 5S – High grade aluminium, 123.8 mm x 58.6 mm x 7.6 mm 112g
HTC One – Aluminium rear and front, plastic side strip, 137.4 x 68.2 x 9.3mm, 143g
Thinner and lighter than the iPhone 4S, the 5S stays true to the iPhone 5 in the looks department with the same tall, unibody frame. Apple has kept the high grade aluminium chassis and made the 5S available in gold, silver and space grey colours. The iPhone 5S measures at 7.6mm thick and weighs less than both the 5C and the 4S at 122g.
The most drastic design change is the introduction of the Touch ID fingerprint scanner. Built into the home button, the Sapphire crystal acts as a lens that can take a picture of your finger and analyse the data from it to authenticate iTunes purchases and replace the passcode.
Watch our iPhone 5S hands-on video:
The HTC One of course has the beautifully curvaceous aluminium design that continues to make it one of the most desirable Android phones to own. It’s a much larger and wider phone than the 5S. Ergonomics are completely different too. The iPhone 5 is a super-slim rectangle that doesn’t shy away from severe edges.

It does leave the HTC significantly thicker than the iPhone 5 – 9.3mm thick against 7.6mm – but the HTC One never feels chunky. Large? Sure, but not chunky.

If you want the HTC One in different colours, the handset now comes in red and metallic blue shades alongside the standard silver.

iPhone 5S vs HTC One – Screen

iPhone 5S – 4-inch 1,136 x 640-pixel IPS screen
HTC One – 4.7-inch 1080p IPS screen
A comparison of the screens of the HTC One and iPhone 5S is a case of weighing up similarities and differences. Most obvious of all, the HTC One screen is significantly larger than the one on the iPhone 5S.
The iPhone 5S packs the same 326ppi 1,136 x 640 display to impress just as it does on the current iPhone, but HTC takes it to the next level. 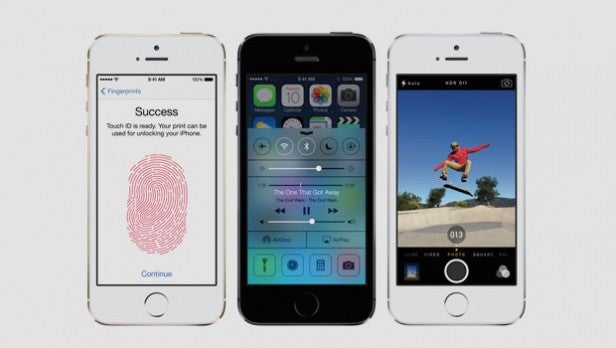 The One screen size 4.7 inches across where the iPhone 5S is still a 4-incher. As we find with so many of this year’s top-end Android phones, the HTC One makes the iPhone 5 seem a bit toy-like in its small size. This instantly makes HTC’s phone better to watch videos on.

Their resolutions are also completely different. The HTC One’s display is one of the most pixel-packed we’ve ever seen. It has a 1080p screen like the Samsung Galaxy S4, but as it’s packed into a smaller space than that 5-inch phone, it’s even sharper. Pixel density is a staggering 469ppi.
Both phones use the same screen type – IPS (LCD). This is an excellent panel type for phones, offering great viewing angles, natural colours and decent contrast.

Bottom Line: Overall, on paper it’s hard to separate the two. The HTC One’s larger screen gives it an edge, but it’s largely a personal preference as to which you prefer. 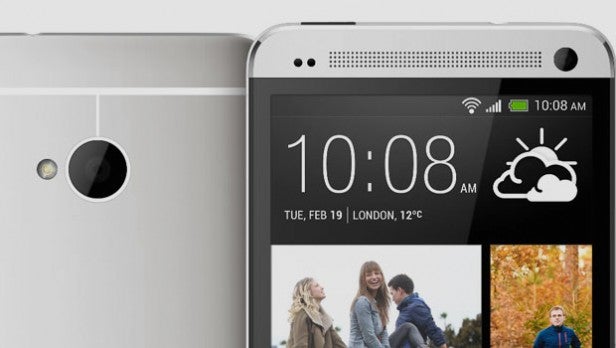 iPhone 5S vs HTC One – Camera

iPhone 5S – 8-megapixel camera with dual LED flash
HTC One – 4-megapixel UltraPixel camera with LED flash
The megapixels for the main camera have stayed the same, but the 5S now has a sensor area that’s 15% larger than the iPhone 5 and the 5C. It has a f/2.2 aperture letting in more light for photos and a new Burst mode that’s activated by holding the shutter down to take photos at 10 frames per second.

With the help of the new A7 processor, you can also pick out the best shots post burst shooting. The 5S also benefits from the inclusion of a new True Tone flash that uses a white and amber flash (and some software processing) to balance colours better when using the flash.
In the filming department, you can expect a 1080p Full HD video recording at 30fps, and supports the ability to shoot photo and video at the same time like the One. There’s a new slow motion mode shooting at 120fps offering the ability to go into video to choose which bits you want as fast or slow footage. 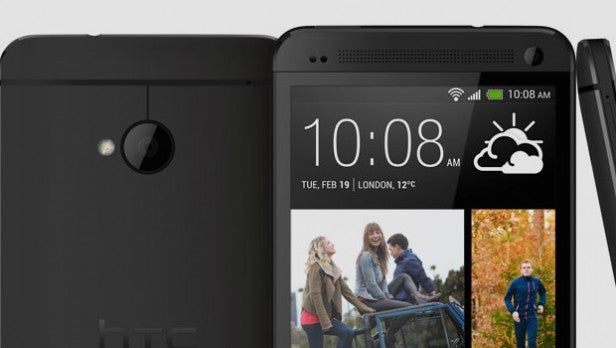 The 5S benefits from several new camera changes introduced in iOS 7. The new camera app offers far more features than the stripped-back app of iOS 6. New additions include active filters for Instagram-style effects. You can also take square photos – perfect for Facebook profile portraits. iOS 7 will also automatically set white balance, exposure levels, and autofocus matrix metering.
Apple talks about larger pixels leading to better quality photos, but HTC has been taking a similar approach for a while offering 2 micron pixels compared to the 1.5 micron pixels on the 5S. Its UltraPixel technology uses a sensor roughly the same size as other 8-megapixel or 13-megapixel smartphone cameras, but with a lower 4MP resolution to increase the size of each individual pixel. This means the One camera can harvest more light in the same exposure time. The results are that it can offer better photos in low light or at night than its rivals.

If you are after numerous camera modes, The HTC One offers plenty. As well as HDR and panorama, the HTC One brings oodles of features and effects, including Zoe mode, HDR video, continuous shooting and burst mode options.

Bottom Line: It’s too early to say which is best – we need to test them properly. The True Tone flash is an interesting addition that could give the iPhone 5S an edge, but the HTC One’s larger pixels may give it an edge, too.

iPhone 5S vs HTC One – Software

iPhone 5S – iOS 7
HTC One – Android 4.2 with HTC Sense
iOS 7 gives the iPhone operating system a complete visual overhaul and it’s the most re-designed version of the operating system since the original iPhone launched. Some say it looks a bit like Android – some say that’s a bad thing – but it adds a bunch of useful features, including a camera app that has a good deal more to it – such as filters.
Read more: iOS 7 tips and tricks

The HTC One saw HTC debut a brand new version of its long-standing Sense Android interface. And it has a new look. It’s pared-back and simple – and pretty stylish compared with the older version. BlinkFeed takes centre stage. This is a home screen that shows you recent updates from your favourite websites in a scrolling feed of tiles. The various widgets are also starker and simpler than ever before.  It’s a good effort from HTC.

Bottom Line: HTC’s additions to Android aren’t universally loved, but the main difference here is philisophy. iOS 7 is simple, stylish and very easy to use. HTC’s Sense UI is information rich and customisable. 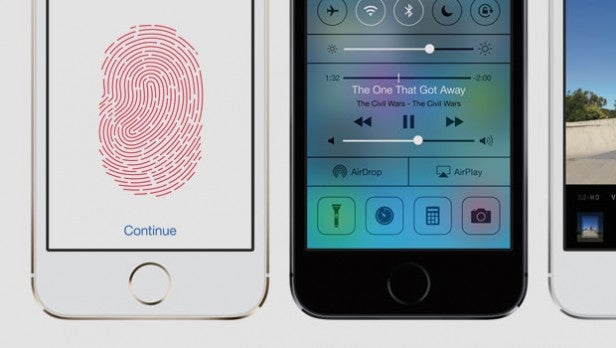 iPhone 5S vs HTC One – Storage

Over the last few years, HTC has ticked off a few old-school Android fans – it was one of the companies that started cutting out memory card slots from its phones. The HTC One carries on that trend. If you want expandable memory you’ll have to look to the Galaxy S4.

As a seriously high-end phone, HTC has sensibly made 32GB the lowest storage option for the HTC One – slap a few videos on a 16GB phone and you’ll soon find its memory eaten up. There’s also a 64GB version of the HTC One and that comes in at around the same price as the top end 5S at around £700. 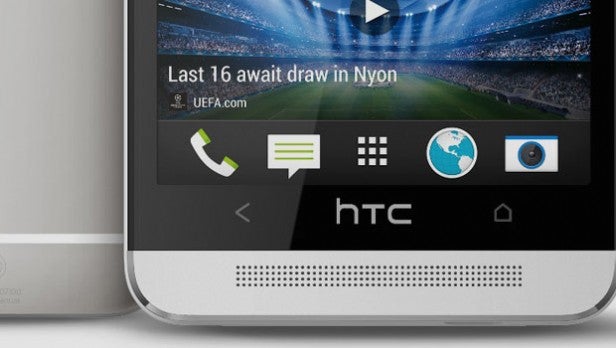 iPhone 5S vs HTC One – CPU and Power

iPhone 5S – A7 processor, 1GB RAM
HTC One – Quad-core 1.7GHz Qualcomm Snapdragon 600 Krait, 2GB RAM
As expected the iPhone 5S moves from an A6 up to a more power-mongering A7 CPU swapping a 32-bit ARMv7 architecture for 64-bit ARMv8 architecture. The A7 CPU is twice as the fast the A6 and will run OpenGLES 3.0 recently announced in Android 4.3 to deliver more graphically impressive games.
Apple has also introduced a new M7 motion co-processor making the iPhone 5S better suited to tracking fitness and health apps. The M7 measures motion data continuously using the accelerometer, gyroscope and compass support. A new CoreMotion API can also identify user movement and optimizations based on contextual awareness.
The HTC One is no slouch, though. It has a quad-core 1.7GHz Snapdragon 600 CPU using the up-to-date Krait architecture. In our time with it, it’s more sufficient to keep things running smoothly whether it’s for gaming or everyday tasks like browsing emails or simply navigating the homescreens.

Bottom Line: The HTC One is fast enough, but we expect the iPhone 5S to hold a significant edge. Just how much of an edge remains to be seen.

So there’s the specs. At first glance, the iPhone 5S doesn’t necessarily trounce the HTC One, but it does make some interesting changes that could improve the overall performance of one of the best designed smartphones. The new camera features and the A7 alongside the M7 CPU show that Apple is fine-tuning existing elements of its smartphone, but it’s still innovating by adding the Touch ID fingerprint sensor. Until we get a closer look with the two together, it’s impossible to call at the moment.
Next, read our comparison of the iPhone 5S vs Samsung Galaxy S4.