This year, the three key flagship phones are all arriving at the same time. The HTC One M8, the Samsung Galaxy S5 and the Sony Xperia Z2 are all on our doorstep.

But which is the best? Here we’ll compare the HTC One M8 and Sony Xperia Z2 to find out which is right for you.

Check out the new HTC One M8 for yourself below. Our preview video includes the phone in action and what the hardware really looks like in person.

The HTC One M8 and Sony Xperia Z2 have very different looks, but they’re both strong. HTC has gone for an all-metal style similar to the original HTC One, just as the Xperia Z2 takes its cues from the Xperia Z1.

The HTC is the curvier of the two, where the Xperia Z2 has perfectly flat panels that sit on its front and back. These panels are made of glass. Between the sleek-looking glass panels is a core of metal. 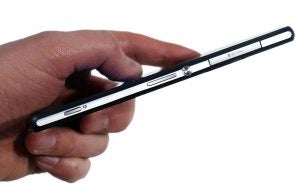 This core is home to a few flaps that cover the ports, providing the phone with water and dust resistance. HTC’s One M8 is not waterproof or dustproof at all. Or at least not to any certification level.

The Xperia Z2’s IP55 and IP58 certification means it can be submerged in water of 1.5m depth for up minutes and that it is dustproof. Submerge the One M8 and it’ll almost certainly die, or at least fry its battery.

Of course, having to use a flap over the microUSB charge port you have to use most days is a bit of a pain. And the Xperia Z2 lacks the impressive stereo speakers of the HTC One M8 – they’re called BoomSound speakers.

Both phones come in three different shades. With the Xperia Z2 you get to choose between purple, white and black. The HTC One M8 comes in metallic grey, silver and gold shades. The silver and gold colours use an anodised-style finish while the grey uses a brushed finish. 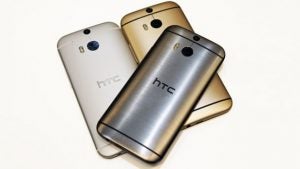 Features-wise, the Xperia Z2 design is a bit more impressive. However, in terms of aesthetic they’re quite evenly-matched. Strong, successful looks make this a case of personal preference.

The Sony Xperia Z2 has a slightly larger screen than the One M8 – 5.2 inches to the HTC’s five. HTC’s recent top phones’ screens have been slightly smaller than the top competition.

However, they’re otherwise comparable in most respects. They use LCD-based displays – the Sony’s is an IPS type, the HTC an SLCD. They’re similar technologies, but IPS is a trademark so can’t be associated with the HTC screen.

The Sony Xperia Z2 does not have a standard display by any means, though. It’s one of the first mobile phosphor screens. These screens use blue backlight LEDs instead of white ones, to give “a brighter and more uniform light” according to Sony. In person, the Xperia Z2 is clearly a lot better than that of the original Xperia Z, but we’ll have to wait until we get our review unit in to give it a proper benchmark.

Once again, these are top performers that are hard to separate from a quick, or even long, glance. The Sony Xperia Z2 screen is a little more technologically advanced, but at present we’re not sure if that will really result in a significantly improved experience.

We honestly believe 99 per cent of you will be perfectly happy with either. 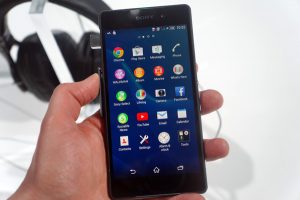 Both of these phones run Android 3.3 KitKat, and have custom interfaces supplied by their manufacturers. HTC’s is called Sense 6, while the Sony interface generally isn’t given a name – instead it’s the services inside the interface that get to have most of the spotlight.

The Sony interface is built around these services, the Sony Walkman music player app and a look that’s a little more serious and self-consciously sophisticated than either the HTC or Samsung interfaces. Thankfully, this latest edition looks a little less up tight than the previous version seen in the Xperia Z1.

HTC Sense 6 is built around a rather simple look – always handy for beginners – and the BlinkFeed newsreel. BlinkFeed is a home screen page that gives you a customisable feed of updates from sources including social networks and your favourite websites.

Both of these interfaces are relatively ‘light’ compared with Samsung’s TouchWiz, and only show a minor performance sacrifice – at most – compared with vanilla Android. 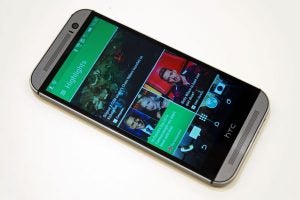 These phones use the same basic processor – the Qualcomm Snapdragon 801. It’s a fast, top-end chip that’s a super-powered version of the Snapdragon 800 chip seen in phones like the LG G2.

Both chips are clocked at 2.3GHz and are quad-core CPUs. However, the Xperia Z2 is backed up by more RAM – with 3GB instead of 2GB. This should in theory make it more able to deal with hardcore multi-tasking, but we’ll check this out once we’ve spent more time with the phone.

The HTC One M8 also features a dedicated sensor chip that’s designed to let it take in data from the accelerometer, proximity sensor and gyroscope when the rest of the phone is dormant. This lets it be powered on by a couple of screen taps, rather than a press of the power button.

The Sony Xperia Z2 has a pretty remarkable camera for a phone. Its sensor is large, its megapixel count is massive and it features a few modes you won’t find elsewhere.

In our Xperia Z1 we were a little disappointed by the camera performance, though, and it looks like the two use more-or-less exactly the same camera setup. It’s a camera that can produce some great shots at 8-megapixel resolution, but low-light performance won’t be as good as the HTC One M8.

The HTC One M8 takes the opposite approach to the Sony phone. Its megapixel count is a lot lower (just 4MP), but the sensor isn’t massively smaller, leading to larger sensor pixels. These can harvest more light, and therefore are able to deal with taxing light conditions better. 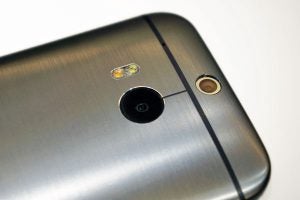 That’s not the best bit about the HTC One M8 camera, though. It also has two sensors, rather than one. The second gathers depth data, letting it tell which items are in the foreground, and which the background. You can then blur out background objects or make them black and white, without any lengthy processing.

The HTC One M8 also has a more powerful flash than the Sony Xperia Z2. It uses a dual-LED setup that’s comparable with the iPhone 5S’s TrueTone flash. It uses LEDs of different hues to avoid blowing out people’s faces in photos.

These are two top phones. The Sony Xperia Z2 irons out the issues of the earlier Z-series phones, while the HTC One M8 just tweaks the excellent blueprint established with the HTC One. Which is better for you depends on your priorities. Do you can more about speakers or waterproofing? Do you like the look of metal or the shininess of glass? Does the creative potential of the HTC’s Duo camera appeal? Aside from these secondary features, the phones are very evenly matched.

Next, read our Galaxy S5 vs HTC One M8 comparison