Does the HTC One M8 have any major issues?

The HTC One M8 is one of the most exciting new phones of the year. It is the best-looking phone of the moment, and has a truly interesting camera.

However, there are a few problems and issues to consider before choosing to splash £550 on this phone – not least of which is the competition from the Samsung Galaxy S5 and Sony Xperia Z2. But here are the most notable problems with the phone itself.

Want to get a closer look at the HTC One M8? Our preview video of the phone will tell you exactly what it looks like in person.

The HTC One M8 Duo camera is too easy to block

When shooting with the HTC One M8, you’ll often find that you accidentally block off the secondary camera lens with your hand. It’s all down to a basic issue of positioning.

The secondary Duo camera sits right up at the edge of the phone, and it is right where your left hand sits naturally when holding the phone with two hands. It does become a bit of a pain, and makes using the camera more awkward. You can’t ‘switch off’ the Duo camera system as both sensors are used with any normal photo, so you’ll keep on seeing an error message telling you you’re blocking the thing.

How to fix it – There’s no getting around this one. You just need to be a bit more conscious of how you hold your phone when taking shots. HTC might release an update letting you switch off the Duo camera feature, but you can’t as yet.

There are keyboard issues

The HTC One M8 uses a similar keyboard to recent HTC phones, and it’s pretty decent in most respects. However, there is one pretty serious issue. It’s way too easy to switch languages when using the phone – many times I’ve been typing and it has seemed like the predictive text function has gone a bit mad. But it’s actually just because the phone thinks I’m trying to type in French.

How to fix it – We often suggest changing keyboards with phones – it’s something you can do with Android. However, it’s not necessary in this case. You can get rid of the language select function within the HTC One M8’s settings menu. Go to the SMS app and bring up the keyboard, then long press the button with the comma and cog on it (the cog is the keyboard Settings menu.)

Then tap Keyboard Selection and you’ll see a long list of languages the keyboard supports. Just uncheck every language apart from English (UK) and the language select button in the keyboard will disappear. Hey presto, you suddenly have a keyboard that is 95 per cent less annoying.

The HTC One M8 is not waterproof

Waterproofing is becoming more common in top-end phones. The Sony Z started the trend last year and now both its successor, the Sony Xperia Z2, and the Samsung Galaxy S5 are water resistant.

However, the HTC One M8 has prioritised its look and feel over waterproofing. Such a feature will always (with current technology) impact on the lines of a phone, so it is not merely a hollow excuse.

The phone won’t simply die as soon as it touches water, but any water that gets into its ports could cause lasting damage, or a phone fatality. Both the headphone jack and microUSB port are found on the bottom edge of the phone, though, which should stop any light drizzle from getting into the phone’s insides.

How to fix it – If you need waterproofing, rugged cases will be available soon. One of the classic weather resistance case suppliers is Otterbox, if you need somewhere to start.

We’ve tried the HTC One M8’s duo camera system, and we understand what HTC is trying to do with it. However, it’s far from perfect. 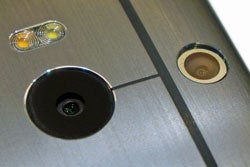 The idea is that you can better pinpoint the subject of your photos by blurring out backgrounds (or foregrounds, for that matter) or making them black and white (while the subject is in colour) without any real effort. It does work, but often has a bit of trouble picking out the subject accurately and gives you little control over how blurred backgrounds are.

Looking at the results, the main benefit of the system over one of its software-based rivals, such as Samsung’s Selective Focus or LG’s Magic Focus, is that it’s fast.

How to fix it – You need to manage your expectations a bit, and also learn how to use the Duo camera. It works best when there’s a good bit of distance between ‘layers’ in an image, and it doesn’t have too many reflections to deal with.

The One M8 doesn’t do 4K video

The HTC One M8 is one of the only new high-end phones that lacks 4k resolution video capture. You’re stuck with plain old 1080p with this phone, which naturally doesn’t sound all that impressive.

It’s likely because of the phone’s relatively low-resolution sensor. At just four megapixels its resolution is actually not high enough. It produces photos with a horizontal pixel count of around 2500 – 4K resolution demands horizontal resolution of, you guessed it, around 4000 pixels.

How to fix it – There is no real solution for this one. However, it’s arguably not much of a problem. There are other more important factors that indicate video quality in a mobile phone than resolution, such as motion handling (/stabilisation) and the intrinsic quality of the sensor. After all, do you even have a 4K TV or monitor?

Camera resolution is much lower than the competition

The limited camera resolution of HTC’s Ultrapixel technology has a fairly serious knock-on effect on still image quality. While the camera is versatile in terms of lighting conditions, zoom in and you’ll be able to see that it can’t produce anywhere near the detail levels of something like the Samsung Galaxy S5.

How to fix it – There’s no good way to create extra photo information, so you need to learn to accept the HTC One M8 camera’s limitations. However, it’s only really a serious issue if you want to blow-up your photos to print out, crop into them a lot or use them as the wallpaper on a giant monitor. If that’s what you’re after, consider the Sony Xperia Z2 or Samsung Galaxy S5 as an alternative.

We’ve seen the shell construction of the HTC One M8, and it’s mostly metal. The “M” in M8 stands for metal. However, this may have a knock-on effect in terms of durability. 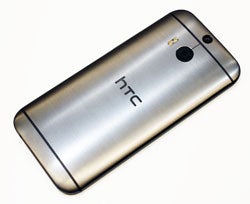 As it’s harder than most plastics, metal transfers the force of impacts more than plastic, which may make the HTC One M8 screen a bit easier to smash if dropped. The original HTC One had a layer of plastic between its aluminium front and rear levels – which in theory should absorb some impact damage – but this has now been removed.

How to fix it – The usual rules of phone maintenance apply here: don’t drop your phone. And if you’re a little clumsy, consider a case. HTC already offers a flip-style case that will absorb much of the force of impacts.

The phone has a smaller battery than the competition

The HTC One M8 battery is larger than its predecessor’s. It’s a 2600mAh unit, up from 2300mAh in the first-generation model, which is a substantial upgrade.

However, we can’t help but notice it’s a good deal smaller than some of the competition. The Sony Xperia Z2 uses a mammoth 3,200mAh battery, without feeling like a chunky phone somehow. Samsung’s Galaxy S5 battery is also a bit bigger at 2800mAh. HTC says that optimisations and a new ultra power saver mode mean it’ll last long enough to satisfy, but under the same conditions there’s almost no chance it’ll match the Xperia Z2 in terms of stamina.

How to fix it – If you think the great look and feel of the HTC One M8 are worth a slight stamina sacrifice, consider carrying around an external battery unit for emergencies. You can find little portable chargers on eBay for under £10.

Does the HTC One M8 have too many issues?

None of the HTC One M8’s issues should put you off too much. You need to limit your expectations of the dynamic camera system a little, but the other problems are results of deliberate design decisions on HTC’s part. This looks like a cracking phone, with relatively minor downsides – thus far, at any rate. We’ll update this article with any more problems that crop up once it is released.

Next, read our Samsung Galaxy S5 vs HTC One M8 comparison