How to battle in Pokémon Go: Our complete guide to training, battling, and winning gym fights in the most popular mobile game in the world right now – and possibly ever.

Just started playing Pokémon Go? Well, before you do anything else, you should give our How to play Pokémon Go page a look.

Once you’re familiar with the basics, and have managed to catch a few Pokémon, you’re going to want to start battling for control of the many gyms in the game.

With that in mind, we thought we’d offer our tips on how to battle, how the gym system works, and generally help you out. Here’s all you need to know:

There’s some confusion over how battling works among newcomers to the game. Firstly, it’s important to note that you can’t just challenge your mates to a random battle if you happen to be in the same area – although we really hope the developer, Niantic, sorts itself out and adds this feature ASAP.

Battles are limited to gyms: landmarks and places of interest in the real world which have been designated as gyms by the devs. Players can control gyms by defeating Pokémon that have been stashed there by the last player enough times to lower the gym’s Prestige level to 0.

What’s a Prestige level? It’s a number which you’ll see it in the upper-left corner when you tap on a particular gym. Every time you defeat a trainer who’s defending a gym, you’ll lower the Prestige score, and defeating all the trainers at a gym will lower the score by 2,000. Once the overall Prestige number hits zero, which could take multiple battles, the gym is yours for the taking. Just leave behind one of your own Pokémon to take control – you might want to keep hold of your more powerful Pokémon, though. 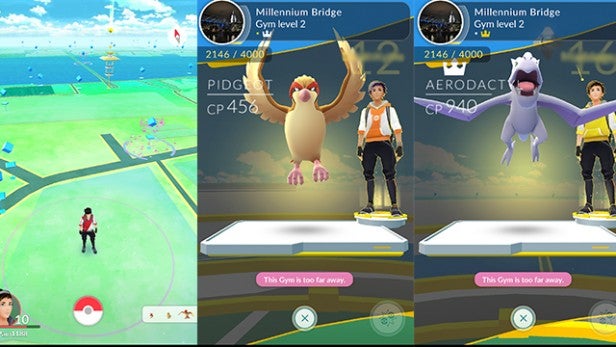 Once you control a gym, you essentially claim it for your team – either red, blue, or yellow depending on the faction you chose once you reached level 5. At this point, it’s highly unlikely you’ll find a blank gym that has yet to be claimed by a team

For those that fancy a bit of friendly sparring, you can battle so-called ‘friendly’ gyms (i.e. those already controlled by your team) to gain extra XP, help upgrade your Pokémon, and increase the gym’s Prestige level. What’s more, you can stash one of your own Pokémon at a friendly gym to help fortify its defences in return for periodic XP and rewards. You’ll get your creature back once it’s defeated by a rival trainer, but it could take some time, so don’t go giving up your no.1 Pokémon in defence of your own team’s gym – you’re going to need that thing to take down your sworn enemies.

OK, so how do you actually start winning battles? Well, you’re going to need to understand a few basics first. Gym battles aren’t all that complicated but can be a tad overwhelming if you go into one without knowing the fundamentals. 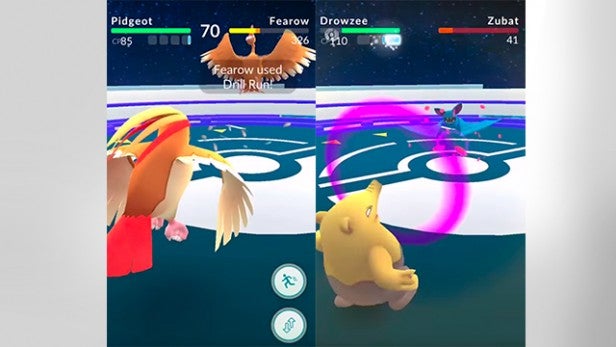 You can take up to six Pokémon into battle with you, so make sure you pick your best six in order to have the highest chance of victory.

When it comes to battles themselves, the goal is, as you’d expect, simply to lower the enemy Pokémon’s health bar to zero, whereupon it will faint and you’ll be faced with the next puny opponent who thinks they’ve got what it takes.

Attacking – Attacking is the main component of gym battles, and is as simple as tapping the area of your phone’s screen where the enemy Pokémon appears. Tapping in this way will unleash a normal attack. The more of these you land, the more you’ll build up your special attack, represented by the blue bars below your main health bar in the top-left of the screen. Once you’ve got a special ready to go, tap and hold the screen to let it loose on your unsuspecting opponent.

Dodging – The other main component of gym battles is dodging. Again, it’s a simple concept, requiring you to swipe left or right to manoeuvre your Pokémon out of harm’s way. Since you can only restore your creature’s health once the battle is over, dodging can be an effective way of conserving your precious life energy during a particularly intense battle.

If you’re heading out to take on multiple gyms in one session, you might also consider investing in a battery pack to ensure the game’s battery demands don’t foil you mid-fight. Here’s a couple of our favourites:

Despite the battling system being based on simple commands, there are a few tactics you can employ to help your chances in the virtual ring. 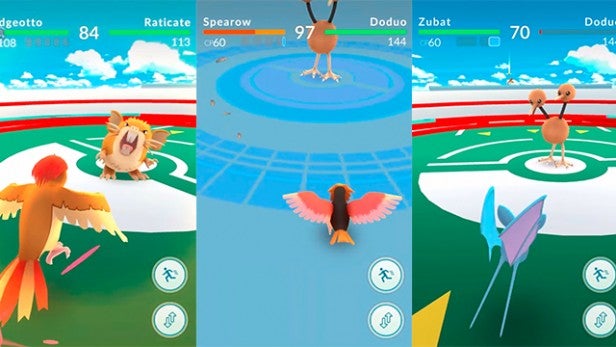 Firstly, it pays to be aware of which Pokémon types do better against other types. There’s a Pokemon types chart here for those who have the time to study it and don’t mind resenting themselves for the amount of effort they’re putting in to this whole thing.

In short, try to keep element types in mind. Water types will do well against fire types, and fire will do well against ice types, etc. You can check which Pokémon you’ll be going up against by tapping on the gym and swiping left to scroll through the various creatures.

You’ll also want to ensure you’re pitting Pokémon of comparable CP (Combat Point) levels against one another. This is an overall rating which represents the strength of a particular Pokémon. While individual attacks have their own levels, the overall CP score will mostly determine who comes out on top and who falls.

Evolving and powering up Pokémon will raise their CP score, which can be done by opening your list of Pokémon, tapping on a specific creature, and using Candy and Stardust to increase their level. Check out our Pokémon GO tips article for more on evolving and transferring Pokémon. 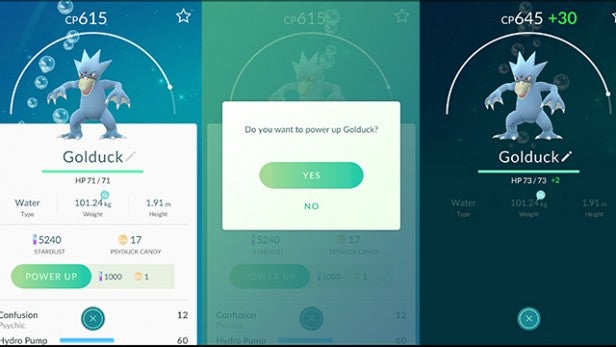 When in battle, there are a couple of ways players have claimed they can get the upper hand. Some have suggested it’s worth dodging as soon as the battle starts, which they say will give you an advantage once your opponent’s first hit misses. Of course, if both of you adopt this tactic, it’s not going to make any difference at all.

Others have been avid proponents of the ‘manically tap the screen as much as possible’ method, which should ensure you land a fair few hits, but will leave you open to a similar onslaught from your opponent.

Your best bet, beyond ensuring you have high-powered Pokémon of the right type, is to try out these approaches for yourself and see which works for you.

What’s all this about Pokécoins?

If you’re successful in your attempts to take over a gym (which you no doubt will be once you’ve used our tips), you’ll be rewarded with more than just control of that particular gym. If any other challengers dare take on your particular outpost, you’ll be rewarded for defending it with Pokécoins. These gold coins are used as the in-game currency and can be traded for new items in the store, such as Pokéballs and revives etc.

As such, it’s a good idea to try and control as many gyms as possible, especially if you’re in it for the money. The more you have, the more chances you’ll get to defend them, and rake in the cash.

WATCH: Hands on with Pokémon Go

Got any more gym battle tips to add? Let us know in the comments.