A graphics card is one of the most expensive upgrades you can buy for a PC, but it also has one of the biggest impacts on gaming performance – it’s possible to turn a system from a sub-console chugger into a next-gen marvel with one new component.

The latest £250-£300 cards from Nvidia and AMD are tempting slabs of silicon that can do wonders for an older system – or give a new build the grunt to outpace the current consoles.

The GTX 970 deploys Nvidia’s Maxwell architecture, which was first introduced in the mid-range GTX 750 Ti earlier this year. This time around it’s in a high-end product, which means a boosted specification: 1,664 stream processors, a base clock of 1,050MHz, a boost peak of 1,178MHz and 4GB of GDDR5 memory that runs at 7GHz. It’s the same GPU that’s found inside the range-topping GTX 980, but here it’s had some of its stream processors disabled to produce a cheaper, slightly slower card. 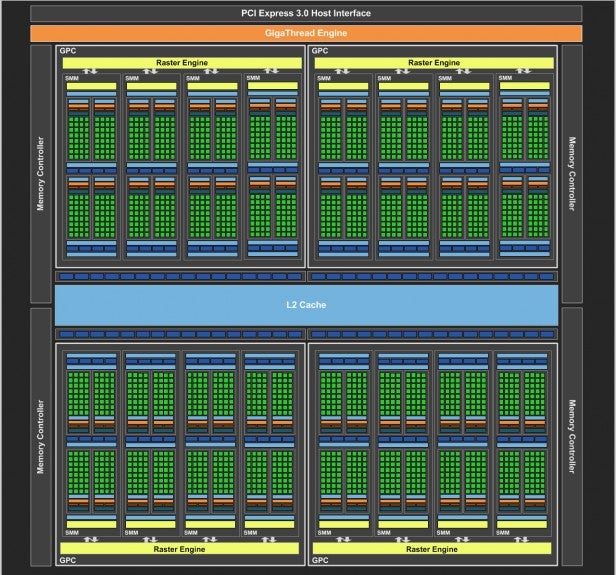 Maxwell isn’t just about performance, though – it’s also about reducing power consumption. Nvidia has done that by reconfiguring how its stream processors are deployed, with work now divided between smaller, more efficient groups rather than big chunks of hardware. It’s somewhat meaningless to compare the underlying numbers of these cards as they use such vastly different internal structures to perform their calculations, but for what it’s worth, the R9 290 has more stream processors than the Nvidia card – 2,560 – but its 947MHz core clock is a tad slower.

The memory situation is interesting: AMD’s card has 4GB of GDDR5 memory, like the GTX 970, and it’s addressed using a 512-bit memory bus – twice the width of the bus used on the Nvidia GPU. However, AMD’s R9 290 runs its RAM at 5GHz rather than 7GHz.