Whether you call it the Internet of Things or smart home tech, your living space is getting more connected. Here’s how the major tech players including Apple and Qualcomm are trying to make it happen

There are certain buzz words that fly around the internet for so long without taking on a tangible form, that we tend to just tune them out. They become little more than background noise.

We’ve been hearing these words for years now, but most of us still manually adjust our thermostats, and most of use don’t send our washing machines text messages.

But believe us when we say that we’re nearing the tipping point where all of these phrases become everyday reality. Here’s what major companies like Apple, Samsung, and Google have planned for
home automation. 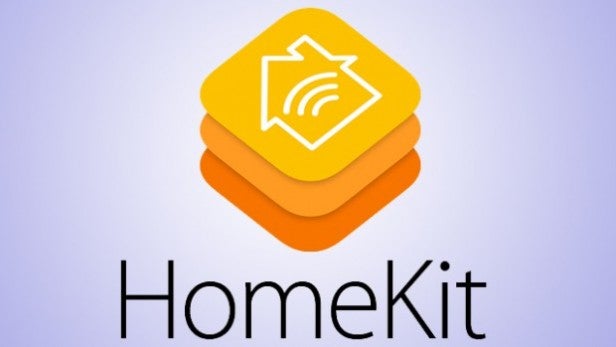 Apple has made no major smart home acquisitions, and it doesn’t have its fingers in every tech pie like Samsung. This means that it has had to tackle home automation differently.

What it has on its side, of course, is peerless design, uniquely tight and unified hardware and software ecosystems, legendary cash reserves, and an admirable ability to cut out the white noise and patiently get to the nub of a new form factor.

Through Apple, your Honeywell smart thermostat will operate on the same platform as your Osram Sylvania smart lights.

That platform, as announced at WWDC 2014, is HomeKit. Yet almost a year later, we’ve only just got concrete details that these devices are now shipping. Withings, iHome and Elgato are all in the process of making HomeKit certified tech, so keep an eye out.

Like Samsung’s solution, you’ll be able to group multiple tasks into what Apple calls “scenes,” and use voice recognition (here it’s Siri) to activate them. So, you could instruct HomeKit to “get ready for bed,” causing your lights to turn off, your garage door to shut, your doors to lock, and your thermostat to lower.

Apple has also retooled its slightly outdated media streaming Apple TV box into a ‘hub’ of sorts. In theory you’ll only be able to interact with your gear while you’re away if you have that black box plugged in, so it could be another purchase you have to make.

We’ve always had a slight problem with the idea of only being able to use Siri to interact with our smart home stuff. Some of us would just rather avoid chatting with a smartphone altogether but there’s also situations when it’s just not suitable. It would make sense for Apple to include an iOS app that ties everything together and lets you quickly power parts on or off and see your current status, but nothing like this was announced for iOS 9 at WWDC 2015.

We did get a couple of new HomeKit details at the developer conference though, but it certainly didn’t get that much time. You’ll now be able to operate your HomeKit wares through iCloud –  a nice touch if you happen to leave your lights on when you’re off on holiday – there’s also new profiles for devices like mechanical
blinds, home security systems and a wider variety of room sensors.

Perhaps the most interesting of the big boys, Google’s attempts to create the ‘home of the future’ kicked off when it acquired Nest, the creator of the iPod influenced Learning Thermostat, for a fairly wallet busting $3.2 billion. 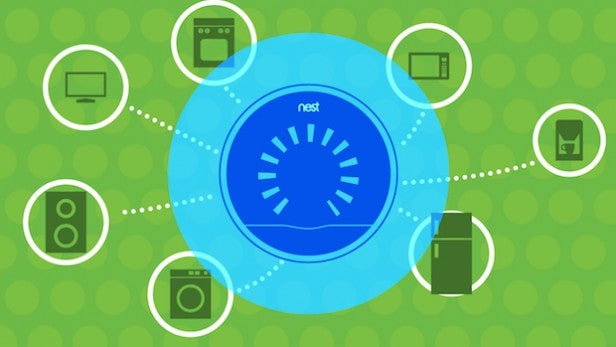 This was especially surprising as many had thought it likely that Apple would be the company to snap up Nest, given the Cupertino firm’s once close support for Nest products. Plus its shared focus on slinky design, and the fact that Nest company had been founded by two former Apple engineers.

Google has so far left Nest to run as its own company, capitalising on the strong brand its has built up in recent times.

The Nest Learning Thermostat, with its distinctive ring shape, smartly learns your usage patterns and optimises your energy usage. Unlike other solutions, it doesn’t require remote control from your smartphone to operate, but it does support it.

Now that Google, ambitious and rich as always, is behind the company, you can bet that Nest will branch out from its currently limited roster of gizmos.

The killer feature with Nest though isn’t its sleek design and minimal look, but its fantastic and growing ‘Works with Nest’ programme. Sort of like what HomeKit is looking to offer, Nest’s approach lets all sorts of compatible connected home gadgets talk and work together.

For example, if you wear a Jawbone UP24 on your wrist it will ping your thermostat when it notices you’ve woken up and raise the temperature to something more comfortable. Same goes if you’ve switched over to August’s Smart Lock – every time you leave the house, the lock will alert the Nest Thermostat and it’ll switch to Away mode. Clever, and you it’s all automatic.

Like Apple, Google is also implementing its voice recognition software. With Google Now on your smartphonr, you’ll be able to say “OK Google” and instruct your Nest system to set a certain temperature, or something similar.

But, Nest isn’t Google’s only smart home player. Announced at I/O 2015, the natty named combo of Project Brillo and Google Weave will look to both to power and connect your home plus, hopefully, make it easier than before.

Brillo – yes, it’s named after those scouring pads – is a stripped down version of Android designed to power the Internet of Things. In time it could end up powering your coffee machine, dishwasher, light bulbs and just about everything else you can imagine. But, on its own, Brillo isn’t enough. That’s where Weave comes in. This is the specific language that developers will use to communicate with Brillo toting devices, telling them how to act and what to do. It should make developing compatible products much easier, thus more common, and it’s open source – so anyone can use it.

SEE ALSO: What are Project Brillo and Google Weave?

Samsung: Anything and everything 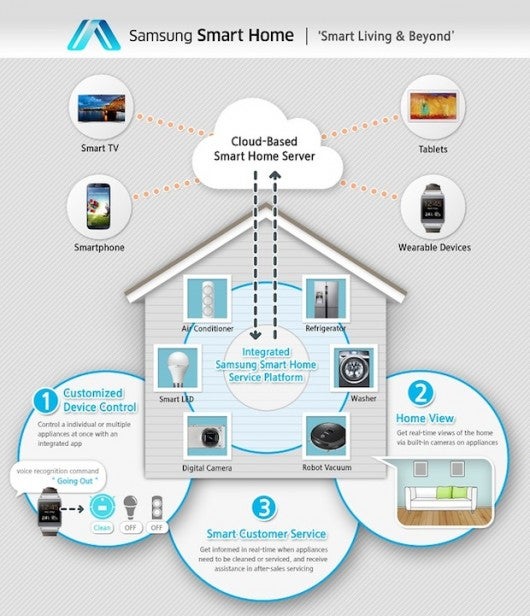 Samsung kicked off its assault on home automation last year with the announcement of its Smart Home initiative at CES 2014. It eventually launched in the spring and received another boost of publicity during IFA 2015. Smart Home lets you control a wide variety of home devices – including white goods, living room entertainment systems, and even lightbulbs – through a simple smartphone application.

It allows you to do things like set up macro functions, so saying “goodnight” to the app could be made to turn everything off. You can also mirror the contents of your Galaxy S6 (or S5 or Note 4) to your, erm, fridge. Because, why wouldn’t you want to do that?

But Samsung really put a marker down on the home automation scene when it acquired SmartThings – one of the brightest names in smart home technology. SmartThings provides packs of interconnecting general-use smart home gear that’s easy to set-up and also relatively easy on the pocket.

These include door and temperature sensors, movement sensors, remote power switches, location-sensing key fobs, and the like. All hook up through a single simple Hub device, and can be controlled through a smartphone app.

LG, like Samsung, has its hand in a lot of the home appliances and home entertainment systems that combine to create a home automation system, though its own plans are a little different.
HomeChat is the name of its main home automation initiative, and it involves the use of instant messaging app Line to literally send messages to your home appliances. In this way, you can use natural language to ask your tumble drier is up to, or to instruct your washing machine to start a cycle. Nest support for HomeChat has been added too, so you can message your Thermostat to let it know you’re away.

More recently, the company launched the LG Music Flow speaker ecosystem, which takes on Sonos in the music streaming game, and employs HomeChat to enable remote operation from your smartphone.

Qualcomm and the AllJoyn alliance

Perhaps surprisingly to some, chip manufacturer Qualcomm is making a pronounced push into home automation – and it has one of the most promising solutions of the lot. The American company has led development of AllJoyn, an open source software platform that lets disparate devices connect without the need for a physical hub device.

Devices using AllJoyn can connect together seamlessly. These include speakers, door locks, security cameras, lighting systems – anything we’ve discussed in this article, really. Devices don’t need to be running Qualcomm processors in order to work with AllJoyn either. It works across chipsets. 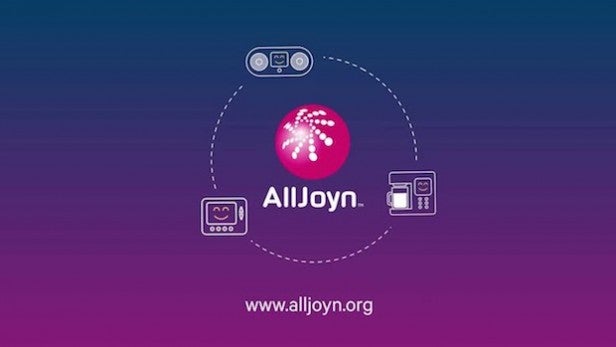 Indeed, it’s AllJoyn’s flexibility and inclusiveness that marks it out as one to watch. It’s goal is simply to provide a means of communication between all kinds of connected smart devices in the home, using your smartphone or tablet as both hub and controller.

Companies can even support the standard without giving up their own operating systems or standards, with the proof of this coming through LG’s involvement. Sharp, Haier, Panasonic and Sears have also signed up to support it, among many others.

All of which makes AllJoyn arguably the purest and potentially most far reaching home automation solution of the lot.

Excited about the idea of smarter homes? Let us know in the comments section below.