Android 5.0 Lollipop is Google’s latest operating system update for smartphones, tablets and even Android Wear-running smartwatches. It’s arriving in the coming weeks and the newly announced Motorola Nexus 6 and HTC Nexus 9 tablet will be among the first devices to run on it.

So what can Android users expect? Well, there’s actually quite a lot. We run down what makes up one of the biggest revamps of Android since it first launched. 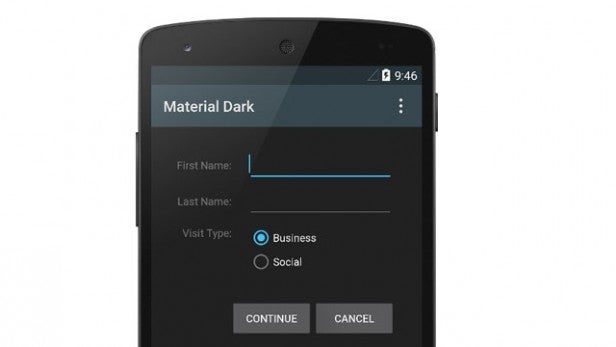 The first thing you’ll notice about Android 5.0 is that it looks quite different to the current Android 4.4 Android, and it’s not – as we once thought – like the experimental Experience UI used in the Nexus 5.

Google has come up with a new interface look, called Material. It’s a lot more vibrant that current Android, and it makes much more use of interface layers. This is quite the opposite of recent trends in UI design, which have all been about making interfaces as flat and simple as possible. Material may be simple, but it’s not flat.

As part of the new Material interface, Google is also introducing two new widgets. The first is a more power-efficient RecyclerView widget, which can be used for features like scrolling through Contacts. The second is a new CardView widget, which has a very Google Now-inspired feel and should ensure widgets run smoother. 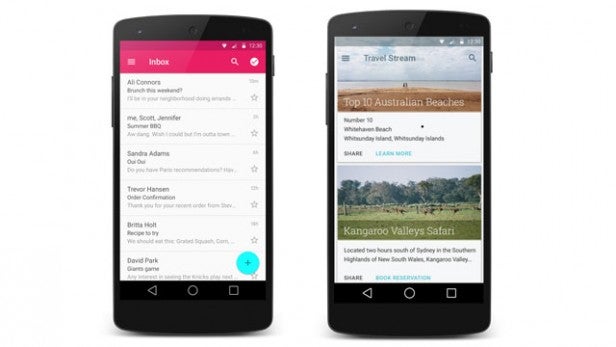 The depth is not just about the way the interface is laid out, either. Android 5.0 introduces real-time generated shadows for interface elements.

This should really help to spruce-up the look of Android, giving it some of the visual tactility of iOS 7. We have seen attempts at this kind of more substantive look in some third-party custom interfaces before, but they generally don’t get it right.

Others end up looking busy, and there are often performance hits to any visual flashiness. But we don’t expect any of that with Android 5.0.

The look of the nav buttons that are a key part of Android have been changed as well. Their functions seem to be the same as ever – back, home and recent apps – but the look seems to have been pilfered from a PlayStation controller.

A triangle, circle and square do manage, strangely enough, to encompass what each of the soft keys are for well enough, though. And the extra simplicity of this is no doubt all a part of the Material look. 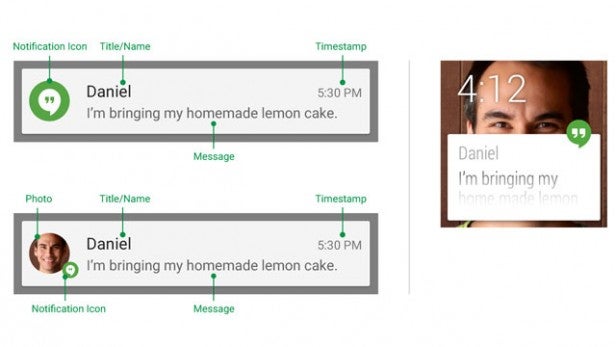 Another
element of Android 5.0 that we’ve seen in some third-party Android
interfaces is heads-up notifications. These pop-up on top of whatever
you’re doing, meaning you don’t have to go to an app or drag down the
notifications bar to find out what’s going on when your phone beeps.

Google is keen to big-up that the Material look is going to be fairly consistent between phones, tablets, desktops and laptops. It wants to offer that smooth cross-platform feel that you get when you really buy into the Apple universe, with an iPhone, iPad and MacBook.

Of course, on the PC front Google is only really going to have access to the Chrome interface – it can’t reskin Microsoft’s Windows. But the look on a laptop isn’t a million miles removed from the tiles of Windows 8.

It’s not just the Android interface that has been given a refresh. The Google apps have too. Much more colour has been injected into Gmail, and the look of the app is both a lot cleaner and more modern.

The square avatar pics of current Gmail have also been traded-in for circular ones.

It seems highly likely that you’ll have control over what apps can send you these pop-up notifications. As otherwise they’ll become very, very annoying. 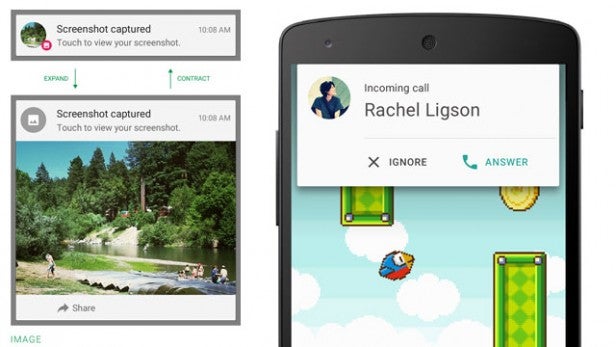 This is something Google introduced in recent Android updates and now users will be able to view notifications in more detail in three different ways. There’s text, inbox and image all of which can provide you with additional context for the notification. It’s something that Android Wear smartwatch owners are also going to benefit from greatly as well.

The idea is to evolve one of Android’s core features to be more useful and deliver the information when you really need it.

Notifications also have a real spot on the lock screen. And, again, this is something that has been common for some time in many custom Android interfaces.

Each notification shows up as a little bar across the screen in high-contrast fashion, making them super-clear. It looks as though four different notifications can be displayed on the lock screen at once on a normal-size phone. 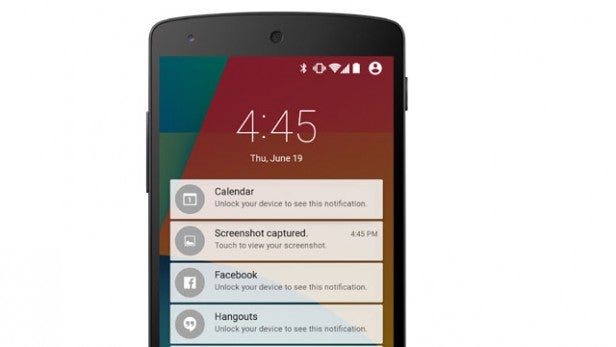 A minor visual tweak of Android 5.0 L is the new multitasking menu. It still shows your ‘recent’ apps, but rather than being displayed as a 2D scroll of apps, it’s now a 3D cascade of app tiles.

It looks quite similar to the tabs screen of the Chrome browser for Android – no surprise there. The look of the Android take is better, though – sharper, simpler and with good use of those new realtime shadows.

Developers will now be able to have links to their apps take the place of websites in web searches. What this means is that you’ll be able to head directly to a specific part of an app right from the Chrome browser on your phone.

This feature has been accessible to a handful of apps to date, but now it’ll be available to all developers. If you’re worried about being launched from Chrome into some dodgy app, don’t be. Just as lesser sites don’t tend to feature too highly in your search results, ropey apps won’t either.

One new feature we knew was coming – support for 64-bit CPUs. As 64-bit CPUs clearly designed to work with Android devices have already been officially announced, this one was obvious.

As well as letting many more instructions take place simultaneously, having a 64-bit CPU really lifts the lid on how much RAM Android phones/tablets can actually make use of. With a 32-bit processor the limited address space means that only so much RAM memory can be accessed at once. 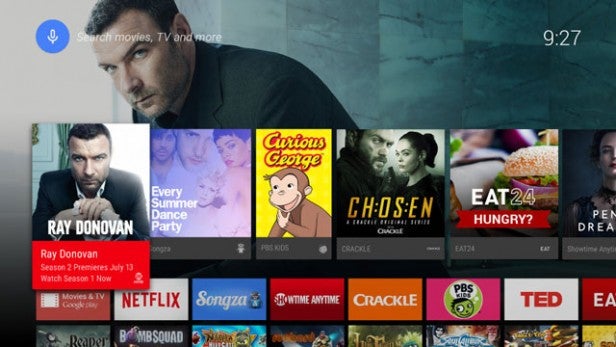 While not a core part of the Android system,
Android TV is a huge development in the Android universe. It’s a version
of the platform designed for your TV, and it’ll eventually be built
into set top boxes and TVs.

You’ll control the thing with your
Android phone, and will be able to play Android games, watch video and
do pretty much anything you can with your Android phone.

Google has improved the coding of Android’s execution of graphics, allowing for much more advanced visuals. It has been dubbed an ‘extension pack’, and will finally make top-end processors start to make a bit more sense.

The extension pack enables tesselation, geometry shaders, computer shaders and ASTC texture compression. The latter is an advanced image compression algorithm that will allow for highly effective reduction in the size of art assets.

ART runtime is in

Android 5.0 L switches over to the ART runtime. If you’ve read our Android 4.4 tips and tricks article you’ll know that this is something people with recent Android phones have been able to try out for themselves for a while.

At present Androids use the Dalvik runtime as standard. ART is significantly quicker, but uses a bit more storage space for apps. It’s a fair trade off in our opinion. 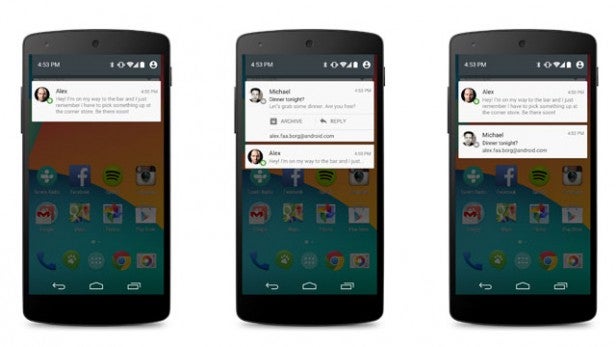 One of the funkiest little additions in Android 5.0 L is a new way to bring your phone out of standby securely. Android Wear watches will work as an authentication tool, meaning you won’t need a password to unlock your phone if you’re wearing your watch. We’re not quite sure yet exact what tech is used to do this. But it is neat.

BUT, of course, if you get mugged your attacker is probably going to nick your Android smartwatch as well as your shiny new Galaxy S6 mobile phone. But it should at least stop your friends from being able to tweet on your behalf should you nip of to the lav for a minute.

One of the new APIs of Android 5.0 L is USB audio. This means you’ll be able to transmit digital audio right from a phone’s microUSB port, bypassing the DAC stage used when you listen through a headphone jack.

What will this mean? It opens up an Android phone to being a genuine audiophile source when paired with a decent outboard USB DAC, and could mean we start to see USB headphones – something Apple is rumoured to be working on through Beats. The Nexus 5 supported USB audio output, but it is not native to all Android 4.4 devices.

Android 5.0 L gets some new battery features, including a reworked Battery Saver mode. Android 4.4 falls well behind the competition in this respect – where phones like the Galaxy S5 have extreme power-saving modes on tap, the basic Android 4.4 battery saver is rather rudimentary.

The lock screen will also tell you how long your phone will take to charge when plugged in – a clever little tweak that seems so obvious now it’s in place.

Bluetooth 4.1 doesn’t clash with 4G signal like Bluetooth 4.0, and it gives manufacturers much more control over the timeout times of the connection. This gives much more scope for controlling power consumption. Bluetooth 4.1 also improves connectivity, letting Bluetooth peripherals talk to each other more easily.

A major new bit of Android 5.0 L is Android Auto. This is a bit like Apple’s CarPlay – it’s an in-car system that runs off your Android phone.

You jump into your car and your Android 5.0 L mobile will start transmitting Android Auto to the screen on your car’s dashboard. Its interface looks quite a lot like Google Now and Android Wear, and will of course let you GPS navigate to wherever you want to go. We imagine it’ll be a lot more open than CarPlay too.