Internaut Day: We take a look back at the history of our beloved internet to see how nine great websites appeared back in the day.

It’s Internaut day, and unlike most dodgy-sounding modern celebrations, this one isn’t entirely made up. 25 years ago today, the father of the internet, Tim Berners-Lee, first allowed public access to the World Wide Web, and a revolution begun.

Of course, we can’t have a celebration without an adequately tortured portmanteau, and this particular occasion pairs the word ‘internet’ with the word ‘astronaut’ for some reason. Something to do with people venturing into unknown territory or, whatever, it sounds good.

And we at TrustedReviews owe Mr Berners-Lee a huge debt – for, were it not for him, we would not be here to provide you with our trusted advice on tech. We therefore thought we’d repay the old lion with a list we slapped together of pictures of old websites.

Mr Berners-Lee, we salute you! 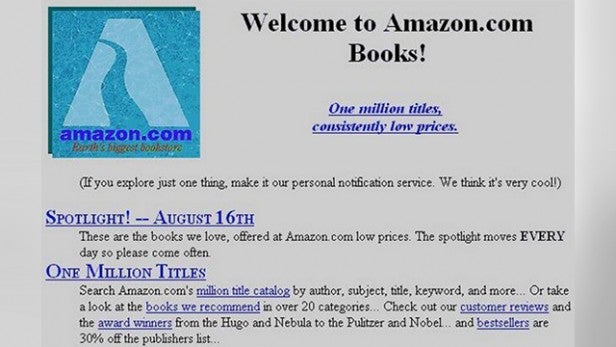 Here’s a good’un. Amazon has basically become a synonym for online shopping these days, but when it first launched in 1995, it looked more like some dodgy website for a new-age health centre. Founder Jeff Bezos decided to name his website Amazon after the world’s largest river, apparently to reflect his desire for the site to become the biggest seller of books – hence the weird MS Paint logo. 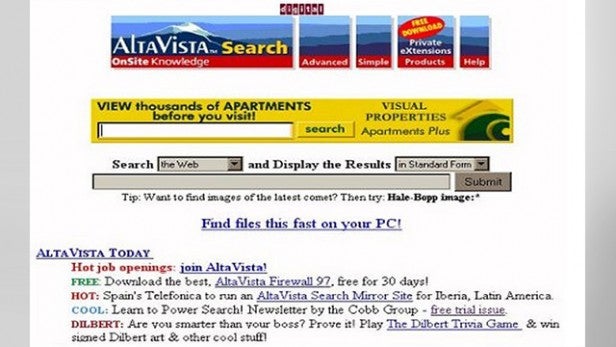 Gather round kids, and I’ll tell you a tale of an age before Google. Once upon a time, the kingdom of the internet had more than one search engine. It was an exciting time as the likes of Webcrawler and Lycos battled for supremacy. But one brave contender in particular remains in the hearts and minds of those old enough to remember when the great search engine wars were raging: AltaVista.

Founded the same year as Bezos unleashed Amazon on the world, AltaVista was eventually bought by Yahoo in 2013, which decided to do what it does best and close it down that same year. It had a good run, but like so many other search engines, it just couldn’t compete with the big G. 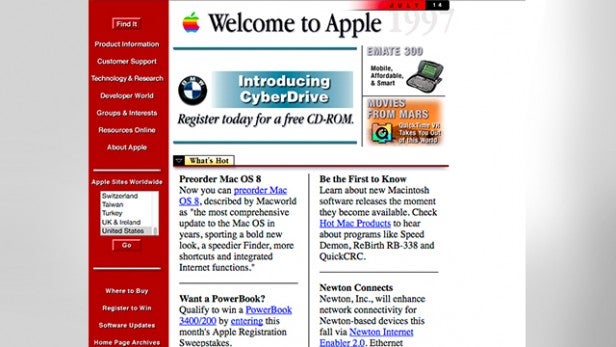 Today’s Apple.com is a decidedly minimalist affair, with beautiful shots of the company’s products sliding in and out of view and a general commitment to sleek and refined aesthetics. Now, take a look at where it all started.

The above image shows the site as it was in 1997, which, according to the Internet Archive, is around when Apple.com went live. And it’s a long way off today’s offering, with an interesting arrangement of clip art and a mish mash of colours.

Oh, and take a look at that advert for Mac OS 8 if you want to feel all nostalgic – *wipes away tear* that OS looked as crap as this website. 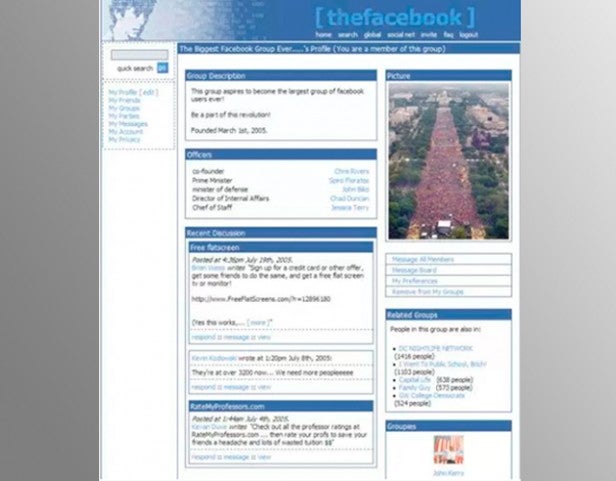 You already know the story of this one – started as a university thing at Harvard then went on to subsume seemingly the entire human race. This shot of the original 2004 site really is a fascinating article. Back then, it seems the company prepended an imperious ‘the’ to the beginning of its name, which appears alongside a rather ominous looking tech dude at the top of the page.

There’s also a lot of mid 2000’s design classics going on here – brackets around words that don’t need them and all that. And although today’s Facebook is a much slicker affair, we’d welcome the return of that creepy guy in the top left, if only to put us off scrolling through our despair-inducing timelines. 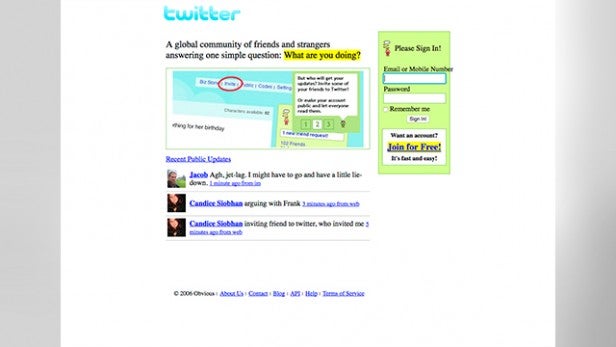 Before it became known as the place to go to get trolled online, Twitter launched with a charmingly simple home page, as shown in the image above. There were no hashtags back then, and even the concept of a Twitter rant was but a gleam in the eye of awful people everywhere.

But, as Jacob and Candice demonstrate, the updates were no less dull. Hope you managed to sort the issue with Frank, Cand. 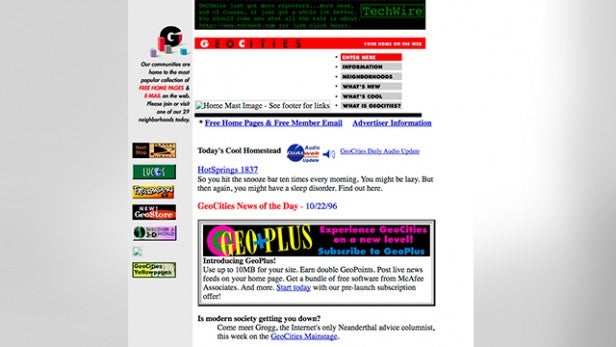 Back in the day, if you needed to host a website, Geocities, with its free web hosting services, was the place to go. Founded as Beverly Hills Internet in 1994 and bought by Yahoo in 1999, the site was once the third most-visited domain. Geocities was shuttered in 2009, but for some reason, Japan got to keep its service.

We like the vibe of Geocities’ site circa 1996 – a lot of energy and an advert for someone calling themselves a Neanderthal advice columnist. What more do you need? 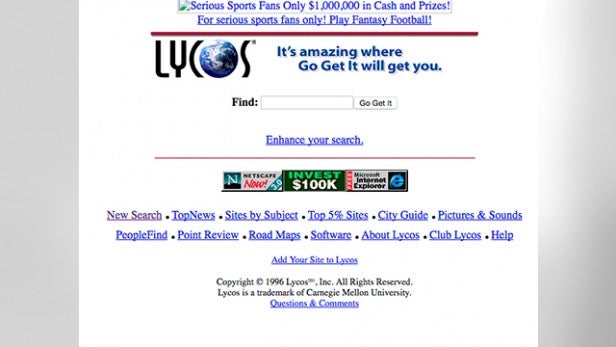 Another search engine that eventually fell to the mighty Google, Lycos was once the most visited site online. It was conceived at Carnegie Mellon University as a way of calculating the size of the web using something called a “spider” robot program, but eventually was turned into a web portal and search engine.

The site grew rapidly in the 1990s, but by 2004 Lycos’ market share had shrunk significantly. But the site is still going, along with its trademark black lab branding. If you’re looking for an alternative to Google, which we’re sure you are, then give the old site a try. 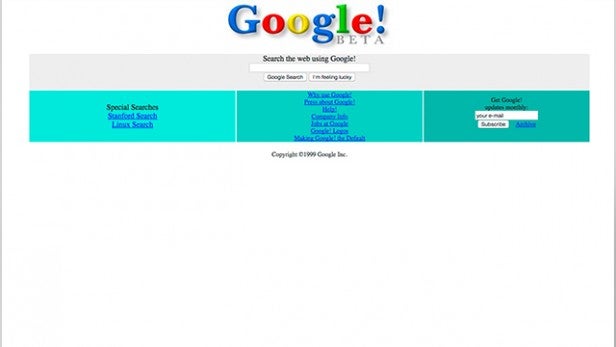 What can be said of Google that hasn’t already been covered. Not a lot, so here’s a picture of how it looked in 1999 instead. It’s actually not all that different to today’s Google homepage – a tribute to the company’s commitment to effective design.

The site was originally live at google.stanford.edu, where founders Larry Page and Sergey Brin met. The pair registered the google.com domain in 1997 and the site went on to rule the world. 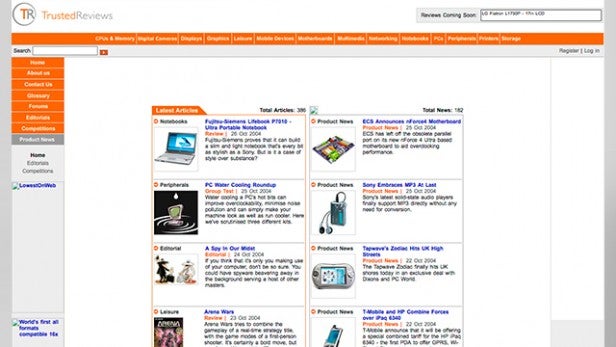 We couldn’t finish this list without giving you a taste of some classic TR. We’ve come a long way since this rather sparse homepage design from 2005, but the colours are kind of the same.

We’re glad we weren’t founded earlier than 2003 too, otherwise the image above might look a lot more like Apple’s clip art-fest from 1997. Though, we can’t help but notice that image for the PC water cooling roundup… It was 2005, guys. For shame.

What’s your favourite website from the history of the web? Let us know in the comments.