What’s new in the Xbox One and PS4 versions of GTA 5?

GTA 5, easily one of the best releases on the last generation of consoles, saw its new gen release last week. A brief glance at the last gen title’s sales figures – last count had it standing at well over 10 million copies sold worldwide – prompt the question: is there anyone in the world interested in this game that hasn’t played it yet? And if they have, why would they shell out more money to play it on a next gen machine.

With that in mind, here are five reasons to head back to Los Santos on your PS4 and Xbox One.

Grand Theft Auto 5 is a great looking game on the last generation but on the new generation consoles it’s eye-wateringly beautiful. The sharper, crisper on screen visuals bring a more immediate sense to Los Santos as a sun-dappled misanthrope’s paradise. From the beach-front funfair to the dusty roads of Blaine County to the glistening lights of downtown, Los Santos has never looked better on any platform and the tweaked day night cycle makes the city a visual treat to behold.

Furthermore, the draw distance in the game has been vastly improved – meaning that flying and driving at high-speeds is made a better experience – and the jump to 1080p means that there’s less shedding or clipping when you’re blasting through the streets in a tricked out ride.

Since GTA 3, the default view in all of Rockstar’s Grand Theft Auto games has been third-person. For its debut on the new gen, GTA 5 offers players the chance to play the game from a first person perspective.

Simply tap the bottom right hand corner of the PS4’s touchpad and you can toggle between views.

Admittedly, veteran players may have some teething problems, especially if you’re not used to driving games that offer a first-person view from the car’s cabin. Also, those who play shooters regularly will probably feel the urge to click in the right thumbstick when they want to sprint – and that will send the protagonist they’re controlling into a crouch. Still, there’s no better way to drink in what an immense technical and visual marvel Los Santos is when you don’t have to stare over the back of someone’s head at it…

See also: PS4 or Xbox One: Which should you buy?

GTA 5 on the next generation isn’t a simple retread; while the campaign and online modes will be familiar to returning players there are a host of new cars, custom jobs and 150 new songs on the in-game radio with two new radio DJs to listen to – Duane Earl on Blaine County Talk Radio and Chakra Attack on West Coast Talk Radio. All the in-game TV shows and films have also been rendered in HD.

Some of the harder missions from the earlier release have been tweaked somewhat and players will find that the controls governing drive-bys and grenade tossing are a bit more intuitive and easier to get to grips with this time round. 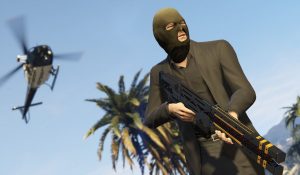 If you played GTA 5 on the last generation of console – and if you didn’t, what’s wrong with you? – you’ll receive a couple of perks for picking up a next gen copy. If you pre-ordered the game you start off with a cool $1m that will be split across both modes – $500K in the online mode and $500K in the campaign mode. You can also transfer across your character, any properties, equipment and cars you have accrued and any jobs you’ve created. Since your progress in GTA Online is measured in cheddar and assets, that’s a pretty big jumpstart on any newbies.

There’s also a raft of new activities for returning players, such as a series of murder mysteries for Michael to Solve, a Wild Life Photo Challenge for Franklin and a new set of Stock Car races to get stuck into. There are also new weapons – the Rail Gun and a wicked-looking Hatchet – and a series of new vehicles including a blimp, a seaplane (Dodo), a gun-metal black muscle car (The Duke O’ Death) and the brand new Cheval Marshall Monster Truck. And you don’t get any of this content unless you’re coming back to Los Santos for a second time. 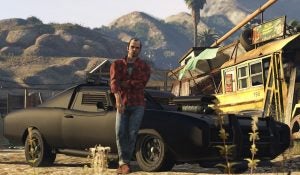 To say that GTA 5’s Online Mode didn’t get off to the greatest start is something of an understatement. That having been said, a year on from its predecessor and GTA 5 on the next gen seems to have ironed out most of the bugs. It also comes front loaded with all of the DLC updates, an enhanced character creation suite and the player cap has been expanded to 30. It still lacks the narrative structure of the campaign, but it’s ever so fun to tool around this chaotic mode, engaging in fights races and fun shenanigans – such as trolling other players who are on a mission. Oh – you can do all of this in First Person mode too!