Moto Droid Turbo 2 vs Moto Droid Maxx 2: The Motorola Droid range has brought success for the company and its partner network Verizon Wireless since the earliest days of Android. Despite three ownership changes at Moto in that time, the march of the Droids has always continued.

The two companies continue to work together on a range of branded devices and Tuesday saw the launch of two new Droid handsets intended for the US market. Both resemble the popular Moto X range, handset currently available around the world, but one really packs in the top end specs.

The flagship Motorola Droid Turbo 2 leads the way, while the Motorola Droid Maxx 2 is a rebranded version of the mid-range Moto X Play, an impressive performer in a recent TrustedReviews test.

Let’s have a closer look at this pair of Android 5.1 Lollipop smarties, both of which will be available to buy in the US from from October 29.

No more distinctive Droid designs then?

Motorola’s Droid handsets have, until now, at least offered their own design language, and have often provided a little more heft than other Moto handsets in the range. It appears Motorola can’t be bothered with all that malarky anymore, so it’s basically serving up a pair of devices that look like the Moto X.

However, with this design simplicity comes the chance for customisation! The Motorola Droid Turbo 2 is the first in the Droid stable to benefit from access to the Moto Maker suite. The store offers over a thousand different ways to customise the handsets design, plus there’s new material options like soft grip, ballistic nylon or genuine Horween pebbled leather.

If users by a 64GB Droid Turbo 2 before the new year then they’re entitled to a free redesign within two years of the purchase. Can’t say fairer than that, eh? Sadly, those settling for the Droid Maxx 2, will only be able to customise their phones with cases. 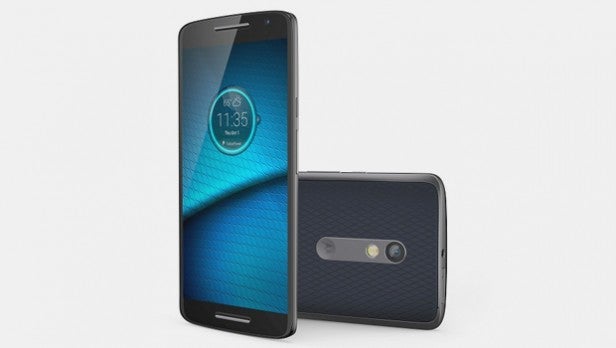 A shatterproof screen, you say? We’ll see about that

Things start to look a little different while you dig around this phone, starting with the display department.

Moto is promising the Droid Turbo 2 will have a shatterproof display. That’s a bold statement considering how adept many gadgeteers are when it comes to smashing that glass. Branded Moto ShatterSheild, it features a flexible AMOLED panel, aided by a ‘rigid aluminium core,’ and three additional layers on top of that.

Apparently, there have been reports of Moto execs chucking them about with great glee on the sidewalk following Tuesday’s presser. The company backed it up by comparing the durability to the iPhone 6 on video (see below).

This could certainly be a unique selling point for Moto as it seeks to get the Droid name back among the flagship conversation.

The upper-mid-range Maxx 2 will have a slightly larger 5.5-inch 1080p display, minus the ShatterShield tech. Regular ol’ Full HD its is then.

It’s not very often we stick battery life above processing power in the pecking order, but a 48-hour lifespan is enough to make anyone take notice.

Both new Moto Droid phones are promising to hit the mark, while the Droid Turbo 2 promises World’s Fastest TurboCharging tech that’ll give you 13.5 hours of additional battery life in a mere 15 minutes.

The Droid Maxx 2 can’t quite match that, but an extra 8-hours in 15 minutes still be a lifesaver. Especially if you wake up in the morning and realise you forgot to plug it in overnight. That quarter of an hour can get you through the day, in theory.

Both devices offer support for Qi and PowerMat standard wireless charging solutions too, which is awesome.

So, let’s talk about the processors. Naturally, the flagship Droid Turbo 2 tops the pile by squeezing in Qualcomm’s Snapdragon 810 chipset. While we await the first devices rocking the Snapdragon 820, the 810 remains the most powerful processors currently available.

Apparently the overheating issues that blighted the clip throughout 2015 have been cleaned up. The Snapdragon 810 is paired with 3GB RAM, an Adreno 430 GPU, up to 64GB of storage, boosted by microSD support. That’s up there with the new One Plus 2 and the HTC One M9.

Processing power is another glaring difference between Moto’s new Droids. Just like the Moto X Play, the Droid Maxx 2 has a Snapdragon 615 chipset, 2GB RAM and 16GB storage with microSD support.

That’ll match up with the new HTC One A9. However, neither of these handsets can match up with HTC’s iPhone 6-alike’s access to Android 6.0 Marshmallow.

Both the new Droids rock Lollipop and considering the update has to go through Verizon first, it might be a while before they’re boosted to the newest version… as was the case with the original Droid Turbo.

As it’s a Droid-branded phone, there’ll also be a load of Verizon bloatware slapped on top of the operating system too, which is never a pleasant proposition. 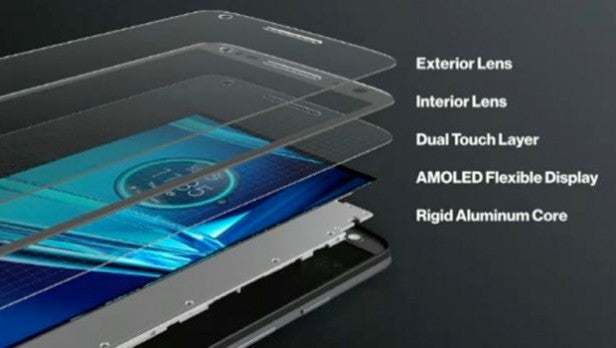 Moto reckons the Droid Turbo 2 has its best camera ever. Oh really?

Motorola certainly hasn’t skimped on the Droid Turbo 2 specs in any way. This is one kitted out smartphone. Moto has even squeezed in its ‘best ever’ camera, with the same 21-megapixel rear-facing sensor that impressed on the new Moto X. It is capable of recording 4K video at 30fps, while the front-facer will give you selfies with 5 million pixels.

The Droid Maxx 2 also has a 21-megapixel/5-mp skills, which are impressive metrics for a mid-ranged handset.

The $624 starting price tag (spread out over 24 months) puts the Moto Droid Turbo 2 well above the new Nexus devices and even the Moto X Pure Edition which is just $399. Considering that last device offers a pure Android experience and none of the network software, It’s a real struggle to see the value here.

The Droid Maxx 2 also offers payment over a period of months through a Verizon contract, with a retail price of $384.

There’s no news on an international launch yet, but TrustedReviews has
received word from third-party retailer MobileFun suggesting it may head to
UK shores under the name Moto Droid Force. That remains unconfirmed and considering the predecessor gave Europe a wide-berth it’d be no surprise if the sequel followed suit.

We don’t have to quiz Moto over UK availability for the Droid Maxx 2, it’s already here in the form of the well-received Moto X Play.

Motorola has clearly gone at the Droid Turbo 2 with the intention of making the no expense spared, best smartphone it possibly can. The idea must be to bring the once-mighty Droid range back into the conversations with the Galaxys and iPhones Nexus phones and even the Moto X handsets of the smartphone world.

The two metrics which may allow it to do so are the super durable QHD screen and the promise of 48-hour battery life.

Given the Snapdragon 810’s highly-publicised problems, that might not be the wisest choice of processor, while we’d have liked to have seen Android Marshmallow out of the box too.

That 21-megapixel camera, which performed well on the Moto X is a welcome bonus through, as is the Moto Marker.

As for the mid-range Droid Maxx 2, well it’ll sit nicely upper mid-range offerings like the new HTC A9 device, the Samsung Galaxy A8, the Oppo R5 and the Moto X play it mimics, but again, 48-hour batter life and a 21-megapixel camera gives it plenty to stand out from the crowd.