When I collect Hamish Patel, CEO and Co-founder of Azoi, from the lobby of our office he’s on the phone. I say on the phone, he’s on Skype using an iPad mini, which I suppose is the modern way of being ‘on the phone’.

The conversation, judging by the look on his face, is quite important and little wonder. Azoi’s fledgling product, Wello, has made a serious impact across the world, earning media coverage in every tech outlet worth mentioning and plenty more from the mainstream press.

Now Hamish and his company are in a race against time to get regulatory approval in dozens of countries and launch the product in good time. But Azoi isn’t just another Silicon Valley starlet founded by a ‘known name’. It’s a company of 35 people based in Ahmedabad, India and its product is the most interesting, innovative and exciting thing I’ve seen in years… and it’s an iPhone case. 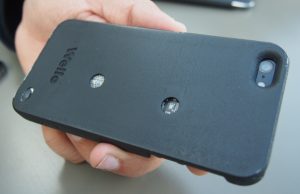 These holes are normally covered

“We had to cut out parts of the case to make it believable,” Hamish
admits sheepishly. “A lot of people don’t believe there’s something
inside.”

It’s easy to see why. Azoi claims this little case can measure your blood pressure, heart rate, blood oxygen, temperature, lung function and produce an ECG “with clinical accuracy”, but it isn’t bulky or obtrusive. But for a few pads and holes, Wello looks like most other iPhone cases. It’s slimmer and sleeker than quite a few, in fact.

What makes Wello exciting is it takes the idea of the ‘quantifiable self’ latched onto by numerous glorified pedometers, such as the Fitbit One and Jawbone Up, to a totally different and more meaningful level. Those products do a great job making something useful out of limited technology, but Wello gives you real information about how your body is evolving.

This includes measuring your lung function, though clearly the case can’t do this alone. For this Wello comes with an attachment for you blow into (effectively a spirometer) that clips onto a magnetic clasp on the side. It’s not the only modular element, either, as the ‘brain’ of Wello can be removed so it can be used in another case on another phone. 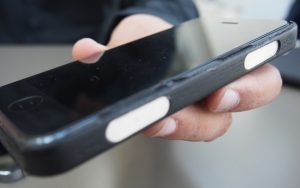 This is the demo version with the padding taken out

The combination of all these measurements opens up all sorts of possibilities. You could use Wello to show the progress (or not) you’re making in a fitness regime, help you manage a condition like asthma or simply help the Wello warn you when something is amiss.

These are just three scenarios, of course, but they reinforce something important: Wello isn’t one single thing, it is what you make of it. If you have a condition it could help you manage it, but equally it could just be a tool for you to understand whether the things you’re doing are making you healthier or not.

It’s as simple as that
Using Wello couldn’t be simpler. Hamish demos holding the case and launching the app. He holds the sensors for 30 seconds, and then his vitals appear on screen. It’s as simple as that. Of course, those readings mean nothing without context, but that’s where the app comes in.

“The app learns what’s in your normal range, so it can flag when something is wrong… It will help doctors because you can show them the history of your vitals. Right now, you show up at a clinic and they have no idea what’s normal for you.” 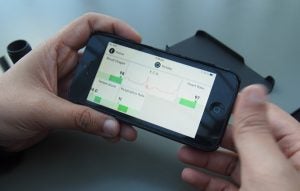 Unfortunately, I didn’t to get to see this context and intelligence at work within the app, and this seems like a key point that Azoi must perfect if Wello is to fulfil its potential. The likes of Fitbit and co. are successful because they’ve found numerous ways to use data to quantify, measure and incentivise you.

Wello has superior information, but it needs to use it well.

Clearly this isn’t the only danger, either. Hamish is at pains to point out that Wello isn’t a replacement for professional assessment, but humankind isn’t renowned for listening to good advice. It seems inevitable, to me at least, that a section of people will either take their health for granted, or use Wello to fuel hypochondria. 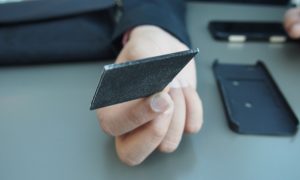 This square unit means you can switch phones without concern

Moreover, while Hamish is adamant that data is totally anonymous, encrypted and not personally identifiable, in this age of NSA snooping and heightened sensitivity to online privacy, I couldn’t blame anyone for approaching Wello with some caution.

But to my mind none of things dampen my enthusiasm for a truly interesting and innovative product. It has hurdles to traverse, clearly, and I haven’t seen enough of the app and the device to say conclusively if it can overcome these.

But if it’s a choice between this and some flashy smartwatch, I’ll take this thanks.

Wello is available to pre-order now for £120 from azoi.com