Assassin’s Creed has been transforming over its past few entries – morphing from a stealthy, platforming adventure into a fully-fledged role-playing experience with skill trees and increased character development. Now, following the striking new trailer for Assassin’s Creed Valhalla – and some comments from the developers – it looks like the series is set to continue down that transformative path.

Assassins Creed Origins began the series’ transformation, adding a levelling system, a sophisticated loot system and getting rid of the tired ‘viewpoint’ method of exploring. Assassin’s Creed Odyssey took those additions a step further, giving players the opportunity to play exclusively as a female character for the first time, adding multiple endings and more freedom than ever before as a consequence.

So, how will things go even further in Valhalla? Notably, there is a keen emphasis on the “harsh choices you have to face,” lead producer, Julian Laferrière, told Eurogamer.

Related: Opinion – Valhalla looks promising, but it could ditch one of Assassin’s Creed’s best features

The choices you make as part of Assassin’s Creed’s increasingly RPG-style plot will shape a home settlement, central to the character’s story, for better or worse. “It’s your own Viking village you’ll see prosper and grow, and which your clan mates will live in,” said Laferrière, “It’s at the centre of our quests and the centre of the decisions you make. We want players to see the consequences of their actions.”

“It really changed the shape of the game we were making,” Laferrière continues. “Instead of exploring one territory, then moving on to another and having no real opportunity or reason to return, the settlement changes the structure. So you’ll go on an adventure and then be encouraged to come back to your settlement. It changes the way we’re playing the game we’re making – at least, that’s the bet we’re making.”

Odyssey already introduced the idea that your decisions could impact the world around you, particularly in terms of characters, but we’re looking forward to seeing this taken to the next level and impacting environments more widely. It seems the Viking settlement will act as the game’s yard-stick, thriving when you are and being shaped by the decisions you make.

Fans of the popular TV series, Vikings, (which is currently available on Amazon Prime Video,) will notice that Assassin’s Creed Valhalla has been heavily influenced by the show’s depiction of the Viking Age. The idea that the settlement will help tell the game’s story is also, arguably, a story-telling tool borrowed from that series.

In Vikings the fictional Norwegian town of Kattegat acts as a base, it grows and prospers when characters succeed and is gripped by disease and in-fighting when things are more rocky. Wherever the characters go in the world, parts of the story are always told by what happens in Kattegat. We expect it to be used as a similar plot device in Assassin’s Creed Valhalla. 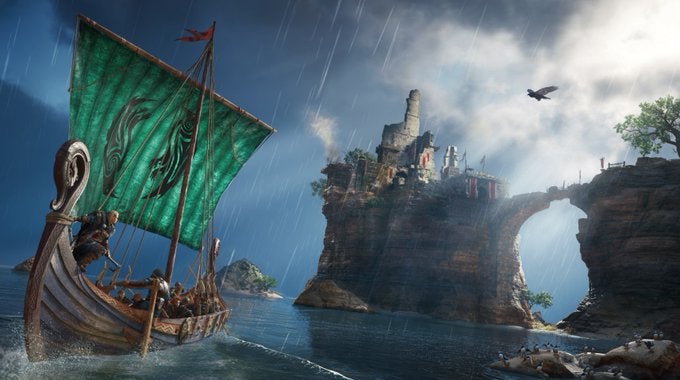 While we’re expecting more character customisation than ever and know that players will once again be able to choose a male or female character, (both called Eivor,) there are limits on this, as the game’s narrative lead, Darby McDevitt, told Gamespot.

“I always find there are two ways to go with a role-playing game where you get to have dialogue choices. You either get to be a blank slate and you create your character–which is one way of doing it–your choices decide whether you’re a wisecracking character or a stoic, or you have a distinct personality and your choices orbit in the spectrum of possible responses–they take the drama in different directions but the character remains coherent. We opted for the latter, we really wanted a coherent personality that people can say, ‘That is definitely Eivor. That is something that Eivor would say.’ We don’t want players to have multiple different types of Eivor. That was a creative decision we made and it worked out really well.”

The new cinematic trailer also makes a point of showing vikings to be more than just raiders motivated by blood-lust and gold. Several scenes show them worshipping their gods or playing with their children in settled villages. We think this could be intended to represent the choices you will have to make as a character during the game – is your priority to launch brutal raids and make a profit? Or, to settle, build an economy and make your living that way?

Another scene shows some vikings hacking their way through hordes of people, while Eivor chooses to spare some civilians, again this emphasises choice and that fact that the game’s vikings will be three dimensional characters, not killing machines, (though they will obviously sometimes be killing machines, this isn’t Farming Simulator).

So, while we’ve not got loads to go on just yet, the fact that players will get to run and shape their own settlement – and make key world changing choices – makes this sound like the most RPG-like entry to the series yet. I think that’s a great direction for the series to be headed in and going deeper can only be a good thing – especially given how well the last two outings cast of the predictable, formulaic trappings that the Assassin’s Creed series had become known for.