Why do so-so games seem to sell loads of copies? Michael Passingham finds out at the Games Developer’s Conference.

Good news everyone, Legend of Zelda: Breath of the Wild is an absolute classic according to our Games Editor, Brett Phipps. But for every Breath of the Wild there are dozens of complete duds, and many of them still sell enough copies to make money.

But why do people buy bad games? It turns out the answer is the amount of money thrown at marketing. No surprise, right? I suppose not, but a look at some recent games industry numbers really hammers the message home.

The cold hard facts are as follows: versus a game that sits in the bottom third of review scores and in the top third of marketing spend.

This is according to Geoffrey Zatkin of games industry firm EEDAR (Electronic Entertainment Design and Research), who presented a talk on games industry trends at the Games Developer Conference in San Francisco on Wednesday.

Of course, there are heaps and heaps of caveats with this data. For starters, the top third of marketing spend is heavily skewed by the fact that 75% of all gaming marketing spend is consumed by just 12% of games that launch. So big-budget “AAA” games are grabbing all the marketing money, and these games are going to sell more anyway because they’re likely to be from a big franchise.

But it’s a reminder that, as ever, the decisions made at the top of gaming companies often don’t serve the best interests of gamers or the industry at large. As this slide from Zatkin’s presentation shows… 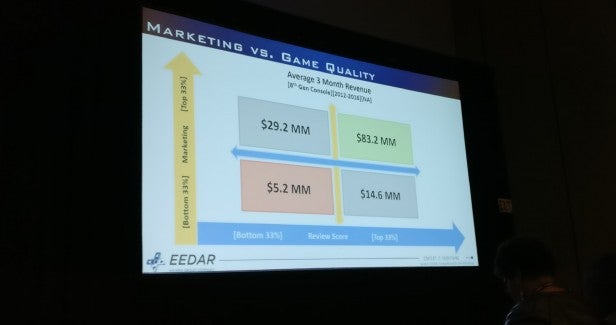 The boxes that matter here are the bottom-right (good game, low marketing spend) and the top-left (bad game, high spend). Additionally, as you’d expect, high-spend games that are also good make the most money and bad games with no marketing budget make the least.

This is all perhaps quite obvious, but it does perhaps offer more proof that when a big games publisher throws money behind a bad game, it’s not just lighting stacks of dollar bills on fire; it is actually making the absolute best of a bad situation and trying to convince you, the consumer who apparently doesn’t read reviews, to buy the game anyway.

But it’s equally a little bit sad. If high-quality games aren’t getting the marketing spend they deserve, they don’t get the sales that us humble reviewers think they should.

The last time similar data was reported on was way back in 2009, when Gamesindustry.biz quoted data from a similar talk from EEDAR. Back then, EEDAR came to stronger conclusions, stating that game quality on the Nintendo DS platform in particular barely mattered at all, and marketing spend on DS games was the overwhelming factor of why games did well.

This doesn’t seem to be the case these days, and game devs can be thankful that the huge rise of YouTube and Twitch gamers has led to a cheaper way of getting a game marketed effectively to a smaller and more dedicated audience.

EEDAR’s Zatkin concluded: “You have to give people a way to discover the game. You can always bet on going viral, but that’s a bad bet to put your game’s success on.”

Watch our Breath of the Wild video review

Plus, of course, if you don’t have much marketing money, you could also just run a Kickstarter and generate income that way. 29,216 games have been successfully funded on Kickstarter, generating $535m in pledges.

The moral of the story is this: If there’s a low-budget game that you enjoy, share it with everybody you know to give it the best chance of success, and stop the AAA big wigs from hogging all the money.

Ever bought a really terrible game based on ad hype? Let us know in the comments below.