Apple is planning to launch a brand new ‘Made for iPhone’ accessory that will introduce another connector for you to wrap your head around. So what is UAC, and why should you care?

UAC is an acronym (which stands for Ultra Accessory Connector), and is an upcoming accessory in the ‘Made for iPhone’ range.

The goal is to make it easier for headphone users to connect their audio gear to different devices.

There are two key aspects to the UAC; there’s the (1) actual accessory you’ll be able to buy, and (2) and new connection standard that Apple is handing over to headphone makers.

How does UAC work?

Let’s say you have a pair of headphones with a Lightning connector. That’ll plug into your iPhone 7 just fine, but it won’t plug into the USB-C port on your new MacBook Pro.

Alternatively, you’ll face the same problem in reverse if you have a pair of headphones with a USB-C connector.

What the UAC accessory will do is function as a middle-man. So future headphones will feature a UAC-style connector that will plug into the UAC accessory. Then, from the accessory, you’ll be able to feed out to a USB-C port, or a Lightning port, or a headphone jack, with the firmware switching on the fly for the relevant connection.

The UAC accessory will also allow headphone makers to save space inside a pair of headphones, versus having to use Apple Lightning port or USB-C.

It’s an 8-pin connection that measures 2.05mm by 4.85mm, and is “slightly less thick than USB-C”. This small size is intended to help device makers save space in their headphones.

It’s similar in shape to the already-existing Ultra Mini USB connectors, which you’ll be familiar with if you use a Nikon camera. Check it out: 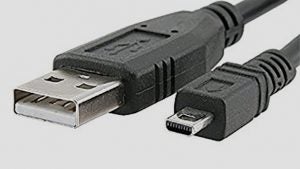 Will UAC be on iPhones?

This is important: UAC is not going to end up as a port on your iPhone. People “familiar with Apple’s plans” told the Verge that Apple wouldn’t be replacing Lightning, or installing a new 8-in port on iPhones or iPads.

This is simply a middle-man connection that helps headphone manufacturers connect their devices to multiple ports.

UAC Release Date and Price: When does it come out, and how much is it?

Unfortunately, we have no idea when the UAC accessory will launch – or how much it will cost.

According to 9to5mac, Made for iPhone program licensees have had access to the new standard for a couple of months. So we’ll probably have to wait for these accessory makers to actually be ready to launch some UAC-friendly headphones before the accessory will arrive too.

And how much will it cost? Probably too much, if we know Apple.

Why is this better than a headphone jack?

In the sense of being able to connect your headphones to different devices, it’s not. This is Apple admitting that it’s ruddy difficult to choose a pair of headphones when there are so many different ways to connect headphones to a device. Back when headphone jacks reigned supreme, this was a complete non-issue.

But USB-C and Lightning connectors are far more versatile than the outdated 3.5mm audio jack of yore, so it’s arguably better for future audio innovation to support these new standards, over the prolific (but less versatile) headphone jack.

Plus, the iPhone 7 doesn’t have a headphone jack, so 3.5mm jacks totally aren’t cool any more, right? Right?

What do you think of UAC? Let us know in the comments.