The Outer Worlds is available to buy right now, but with an arsenal of weapons to loot, a huge number of upgrade options and secret goods to uncover, it’s very easy to get overwhelmed – especially if you’ve challenged yourself with the Supernova difficulty level.

We’ve compiled a list of our best tips to help you succeed, whether you fancy becoming a silent thief, a super trooper or a charismatic charmer.

1 – Build a character to suit your playstyle

Since this is an RPG, the first thing you’ll be asked to do in The Outer Worlds is create your character and share attributes points between Strength, Dexterity, Intelligence, Perception, Charm and Temperament.

You may be tempted just to upgrade any skills you take a fancy, but this can give you a lop-sided skillset. For example, there’s not much use in investing lots of skill points into Melee and Ranged if you want to focus primarily on stealth.

If you favour combat above anything else, then you’ll want to focus on Strength. If you want to be able to upgrade your weapons and hack into security terminals for a more tactical approach, then Intelligence is the attribute you’ll want to give attention. And finally, if you love tackling issues via sweet talk and deceit, then Charm is the best attribute to improve. 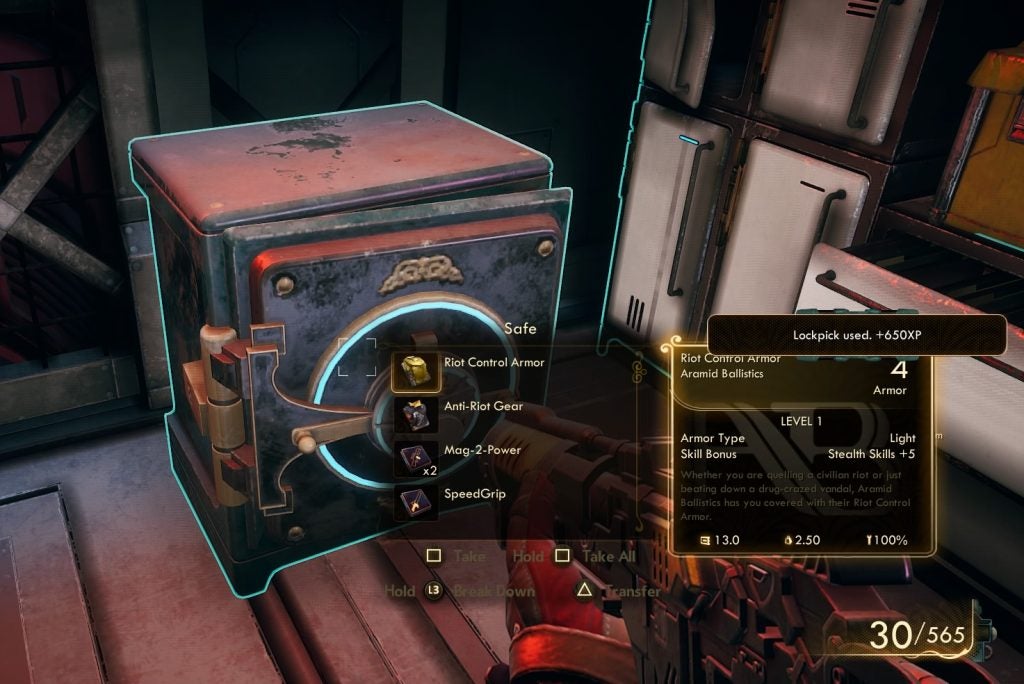 While The Outer Worlds isn’t strictly a looter shooter, it does involve a lot of looting. You’ll find items from defeated enemies, deserted houses and locked crates. Nothing is invaluable, as even junk can be sold for fair prices and low-powered guns can be broken down into weapon parts which come in handy for repairing.

If you’re on the search for high-tier loot, you’ll want to either gun down/sneak past enemies guarding storage containers, or instead open up locked vaults/crates/doors if your lockpicking skill is high enough and you’ve got the required number of Mag-Picks. There’s almost always something of interest hidden behind such obstacles.

You’ll loot hundreds of weapons during your playthrough of The Outer Worlds, but you can only equip four simultaneously for quick access – the rest will remain in your inventory. Despite the huge number of guns available, there’s only three ammo types: Light, Heavy and Energy.

If you fill your inventory with weapons only using one of these ammo types, then you’re going to run out quickly, so it’s best to swap between the three on a regular basis. I opted for a plasma rifle, light machine gun, shotgun and melee weapon for close-encounter emergencies. 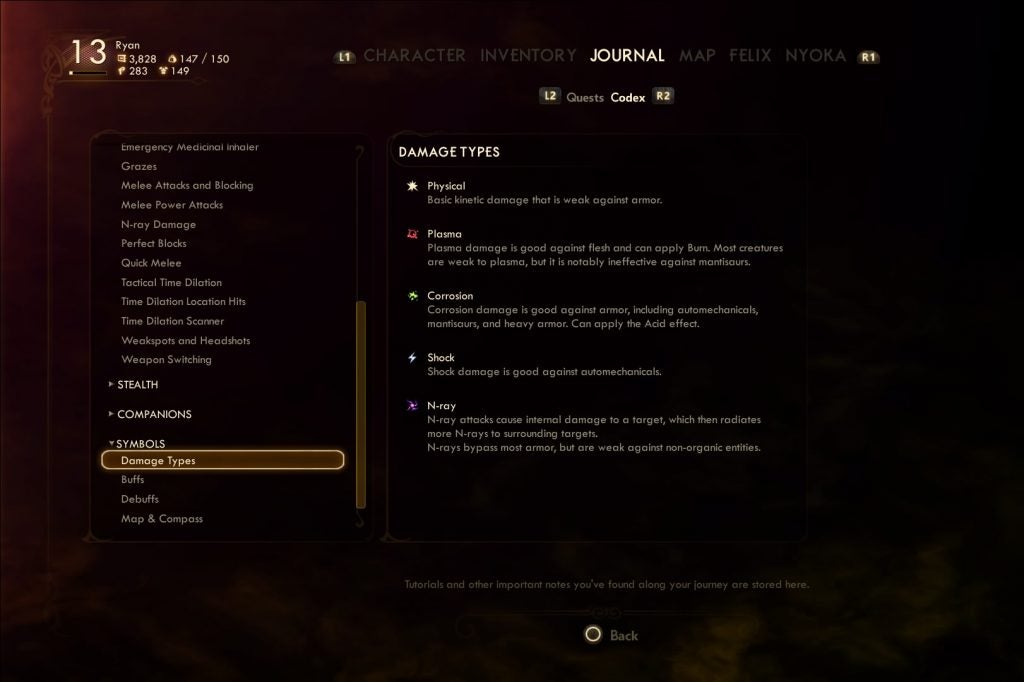 4 – Take advantage of the rock-paper-scissors combat

It’s not immediately obvious from the start, but The Outer Worlds actually utilises a rock-paper-scissors combat system. At the bottom-left corner of a weapon in your inventory, you may notice a symbol. There are 5 variations, including Physical, Plasma, Corrosion, Shock and N-Ray.

Plasma damage is super-effective against fleshy enemies, but not so great against machines or the reptilian Mantisaurs – for those you’re better off dealing Corrosion damage. Shock is another great option for dealing with mechanical enemies. N-Ray, meanwhile, causes internal damage to organic enemies, while also inflicting pain to nearby targets.

It’s worth carrying guns in your inventory for each damage type, as you never know what kind of enemy is lurking around the corner.

5 – Save your Bits for weapon upgrades

The Outer Worlds’ in-game currency is called Bits. These can be used to purchase new weapons and consumables from vendors, but I’d recommend using them for weapon and armour upgrades instead.

After levelling up your Science perk to 20, you’ll unlock the ability to ‘tinker’ weapons at the many workbenches dotted around the galaxy. For a fee, you’ll be able to improve the damage and strength of your gear. Mind, the cost will increase every time you level a weapon up, but it’s still a more cost-effective option than buying a new gun every time you outgrow it. There are restrictions though, as you can’t upgrade weapon or armour beyond you own character’s level.

It’s also worth equipping your gear with modifications, which can be found and purchased throughout the galaxy. These will give bonus perks such as improved attack speeds or reduced noise. Be careful which weapons you attach a modification though, as they can’t be taken off afterwards. 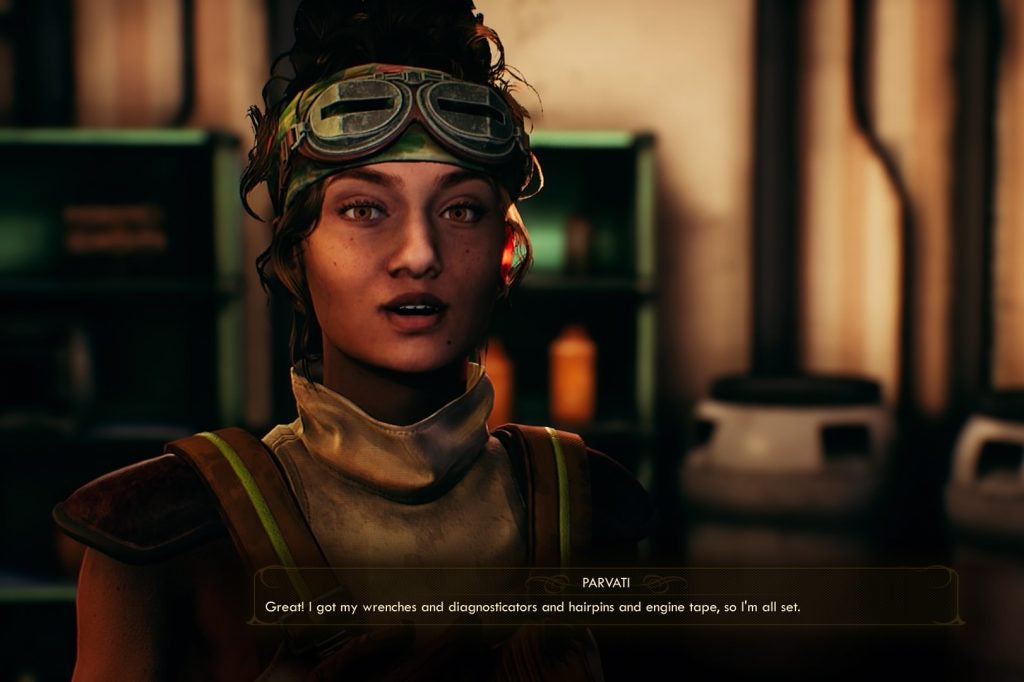 6 – Use companions that compliment your skills

The Outer World lets you recruit select NPCs to your crew, with two being able to accompany you on your travels outside the spaceship. Obviously their personality will have a huge factor on whether you want them jabbering away behind you, but it’s also good to consider their skills too.

Each companion will have specific Skills, which will give a huge boost to your own. For example, having Felix as your companion will see your Persuade, Sneak and Lockpick attributes improved dramatically. With this in mind, make sure to use companions that have skills you plan to take advantage of.

You’ll also want to give your companions new perks every time they level up, while also equipping them with high-level weapons and armours so they don’t get knocked down immediately in a firefight.

Most video games missions don’t require much thought – simply follow the pop up messages and you’ll soon be on your way to victory. The Outer Worlds operates slightly differently, as the mission objective you’re given isn’t always the sole route you can take.

For example, you might be tasked with murdering another character, but if your Persuasion skill is high enough, you might be able to talk your way out of trouble instead. You’ll also be able to hack computer systems or pickpocket characters to gather intel which can be used for blackmail.

The Outer Worlds always offers several options for completing a mission, they’re just not always made obvious, so it’s good practice to explore your options before diving in. 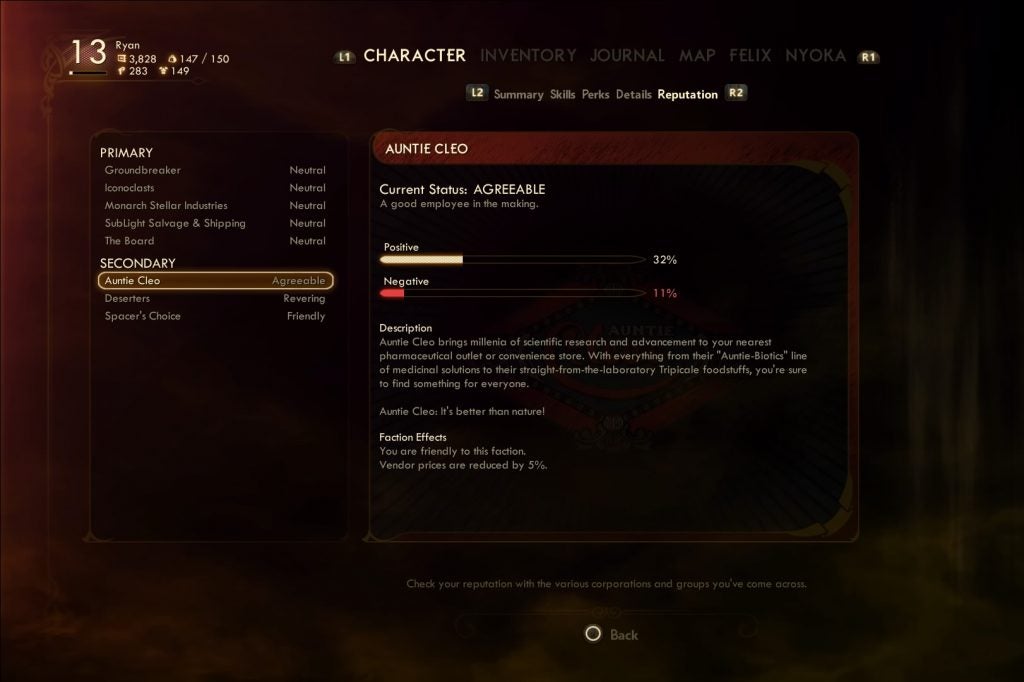 8 – Try and keep everyone happy

It’s possible to kill most (if not every) NPC in The Outer Worlds, but as dastardly satisfying as that is, it can cause a lot of issues for you in the long term. There are multiple factions in the game, and your reputation with them will change depending on your actions. Complete a side quest for them and they’ll like you more, but kill one of their members and they won’t be so fond of you.

Your reputation with a faction brings perks and consequences. If they like you, you’ll get bigger discounts with vendors and unlock more dialogue options. If they take a disliking to you though, characters within that faction will become a lot more hostile towards you. It’s not always possible to have every single faction like you, but you’ll want as few people thirsty for your bloody as possible if you want to explore the galaxy in peace.