The Outer Worlds is the Bethesda RPG you always wanted – it just so happens to be made by an entirely different developer. This sci-fi adventure is one of the best RPG examples of a choose-your-own adventure, allowing you to take the steering wheel for both the storyline and how you tackle each objective.

From the Dungeons & Dragons style character sheet to the branching create-your-own-adventure mission structure, the influence Bethesda’s RPGs have had on The Outer Worlds is unmistakable.

That’s no surprise given the game’s creator, Obsidian Entertainment, was responsible for the hugely popular Fallout: New Vegas. What’s more of a shock is The Outer Worlds isn’t merely a New Vegas sci-fi clone, but a vastly improved RPG venture that feels like a significant but natural evolution nine years later. Put simply, Obsidian is beating Betesda at its own game.

While the likes of Fallout 4 promised players the opportunity to adopt any playstyle they fancy, it still felt very much like a classic run-and-gun shooter with extra features tacked on top. The Outer Worlds can’t be accused of the same sin, with the opportunity to avoid combat altogether persistently present. 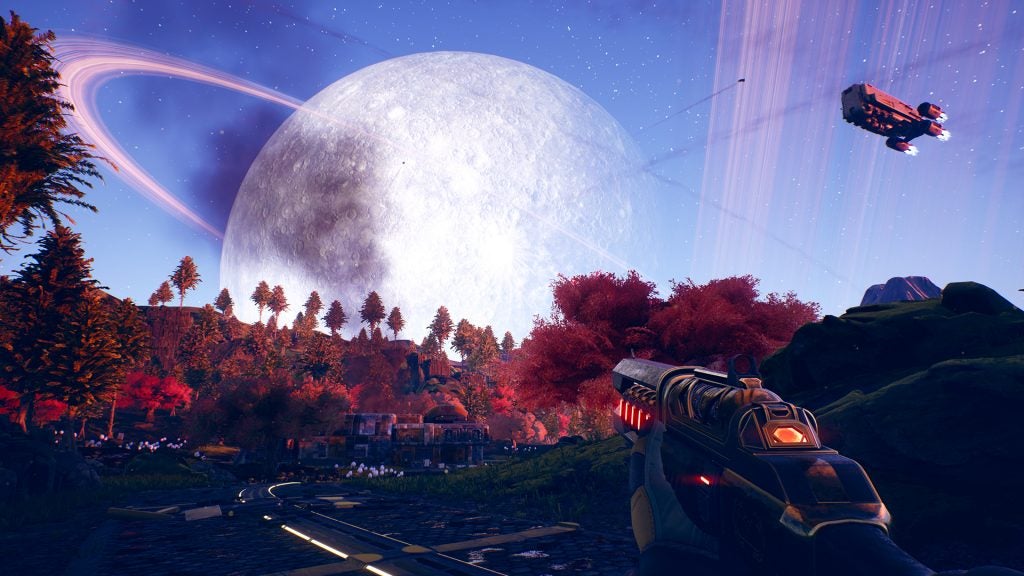 With enough stealth skill points applied, you’re able to sneak and lockpick your way through enemy-riddled buildings without detection. Or instead, you could become a computer wizard, hacking computer terminals to open sealed doors and configure the artificial intelligence of guard ‘bots so they fire at their mechanical mates. My favourite skill of all though was the dark art of persuasion, as I sweet talked others into doing the dirty work for me and convinced trigger happy characters to set aside their guns.

Persuading a character wasn’t simply a case of upgrading my Dialogue skill and choosing the most complimentary speech options. I had to gather intel from computers, gossip with NPCs and make Sherlock-esque deductions from the environment in order to unlock the desired dialogue option. It’s a lot of work, but the payoff from diplomatically defusing a situation feels absolutely incredible.

That’s not to say gunning down enemies isn’t fun though. The Outer Worlds is brimming with a variety of weapons, including your traditional sci-fi plasma blasters to more quirky additions such as the shrink ray and a flame-powered scythe. You don’t have quite the same levels of gun kickback as a dedicated first-person-shooter, while melee combat feels too floaty, but its still all perfectly adequate. 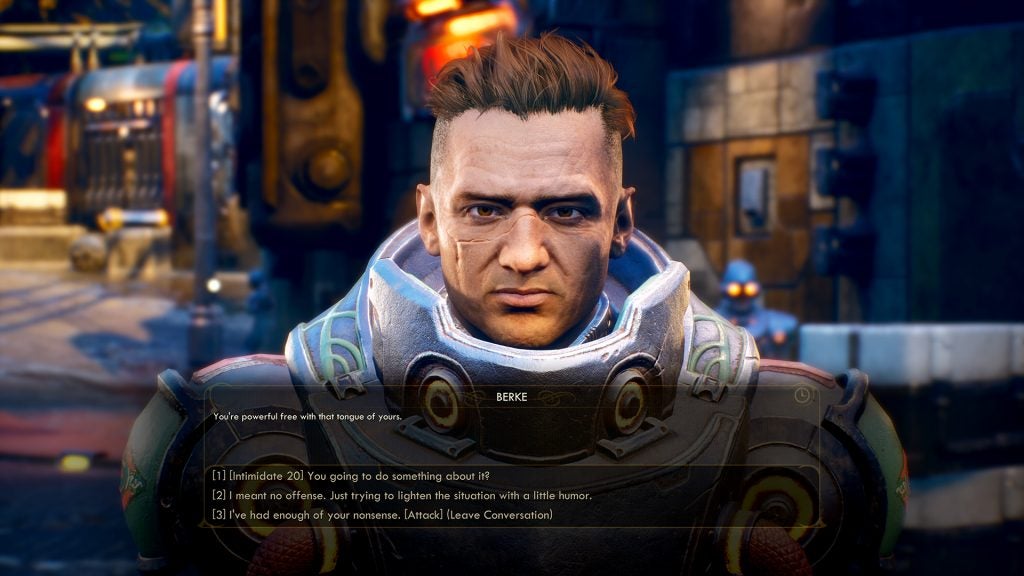 The implementation of a rock-paper-scissors combat system encourages experimentation with its diverse arsenal of weaponry, preventing you from relying on one over-powered rifle. For example, plasma weapons are capable of disintegrating fleshy foes, but aren’t so effective against the steel-clad machines and the reptilian Mantisaur monsters – corrosive bullets prove far more useful here. Such a system ensured The Outer Worlds never felt like a mindless shooter, rewarding my tactics just as much as my my trigger fingers.

Going for the violent option too frequently can also have severe consequences on the game world. Most (if not every) NPC can be murdered, and doing so can close off select missions. Your actions will also influence your reputation among several factions, influencing vendor prices and the hostility towards you. Rarely have I experienced a game world that feels so immersive and malleable, increasing the gravity of every one of my decisions while making planet revisits a far more fascinating prospect.

You’re able to have your main ally arrested right at the start of the game, while one of the main antagonists can be disposed of well before the final scripted showdown. The narrative always adapts to your decisions too, providing the illusion you’re not simply following a pre-written script but carving out your own story. There are blatant play-choice crossroads, but each possible route is as morally ambiguous as the next. Abandoning the typical “good” and “bad” morality meters in favour of these murky ethics makes for far more engaging and memorable storylines.

I always felt like my choices had a massive impact on the universe, and by the end credits I was eager to start a new game and take different routes to see how the story would develop differently. It’s arguably underwhelming that the end result of all of these story threads are summarised via a narrated slideshow akin to something you’d see at the end of coming-of-age graduation film, but it certainly sticks to the same tongue-in-cheek tone Obsidian was going for. 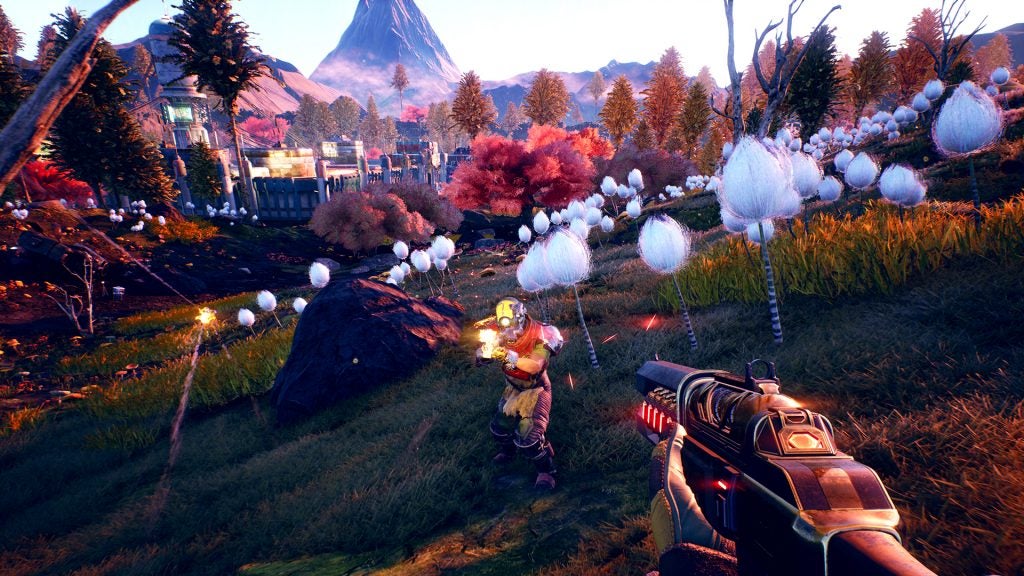 The Outer Worlds nails the wacky, tongue-in-cheek tone from the get-go, with the laugh-out-loud dark humour a perfect fit for this slapstick satire. Within a few hours of play, I had the spaceship AI bluff a self destruction sequence in an attempt to scare me off, while a commander expressed concerns about the work ethic of a soldier who died during their work shift.

Obsidian has included lots of tiny details into The Outer Worlds to weave into its humour, including random emails, environmental storytelling and even item descriptions in your inventory. My personal favourite for the latter can be found on the Flamethrower, which reads, “For when you absolutely, positively have to set everything you can see on fire”.

Unfortunately, the main story is a lacklustre affair. The Outer Worlds tells the tale of a mad scientist hellbent on waking up hundreds of people trapped in a cryogenic slumber. Other than delving into the corruption of corporate figures, the story doesn’t really advance much further, with the majority of the story beats coming in the final few hours.

The Outer Worlds is very much a choose-your-own adventure, but lacks that cinematic quality as a consequence. Dialogue cutscenes featuring your crew mates often feel jarring due to the constant switching between character shots, with the camera refusing to fit multiple people into a single frame. I understand why this is the case – it would take a lot of effort from Obsidian to render animations for every possible character combination – but it does prevent The Outer Worlds from generating any tension, drama or emotional impact.

The crew mates are still a welcome addition though. From the shotgun-wielding vicar to the cleaning bot turned death machine, each companion offers a different dynamic to dialogue, while also giving a stat bonus to select skills. There are five recruitable NPCs scattered across the galaxy, operating very similarly to Mass Effect, in that you can upgrade their skills, provide them with weapons and even complete character-focused ‘Companion Quests’ for a bounty of experience points. The cast of companions range widely in quality though, with Parvati showing impressive depth and is generally very likeable, while Felix has just as much personality as a cardboard cutout. 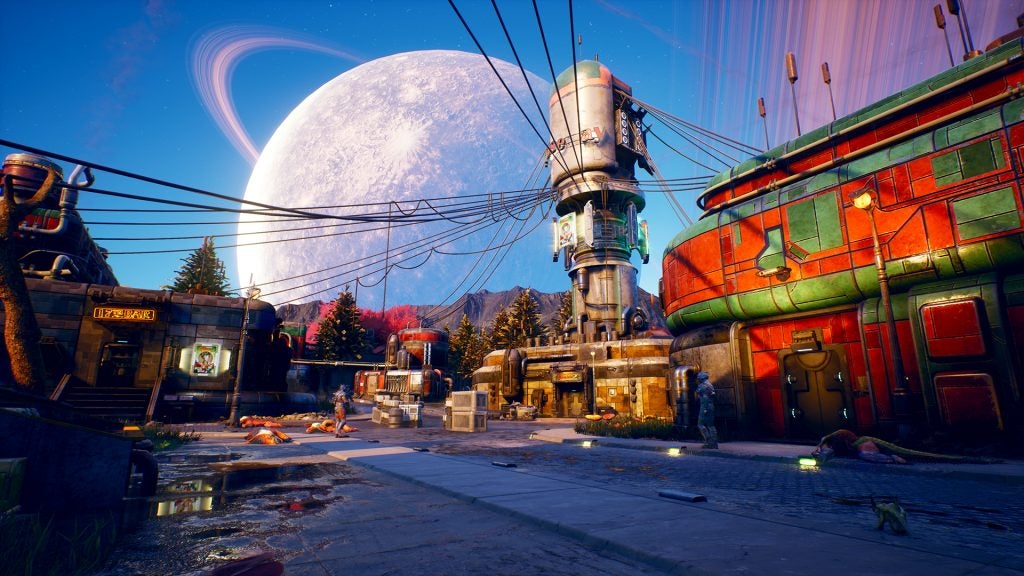 The cartoony and vibrant art style compliments the slapstick charm very well, while also providing a distinctive character to the many planets you explore. Unlike the likes of Skyrim and Fallout 4, The Outer Worlds doesn’t take place on one massive open-world map, but several smaller hub worlds. This has the benefit of allowing the seismic narrative-altering consequences from various missions to remain potent on each planet, but without affecting the entirety of the game.

The only major drawback to having several hub worlds is planet hopping involves a couple of nuisance loading screens. That said, I get a joyous Guardians of the Galaxy vibe every time I join my ragtag crew aboard The Unreliable ship and watch it jet across the galaxy for another adventure.

And it’s also worth pointing out that despite putting many hours into The Outer Worlds so far, I encountered few bugs or technical glitches. You’ll see texture popping when you first spawn into a world and load screens are a tad slow on the standard PS4, but both of these are forgivable when you consider how densely packed each planet is with loot, enemies and side quests. I did encounter a strange phenomenon where my controller would stop working everytime I saved the game, but I quick reboot to the DualShock always fixed this.

Should I buy The Outer Worlds?

The Outer Worlds is the Bethesda RPG you always wanted – it just so happens to be made by an entirely different developer. This sci-fi adventure is one of the best RPG examples of a choose-your-own adventure, allowing you to take the steering wheel for both the storyline and how you tackle each objective.

After playing through with a character with more charisma and scientific knowledge than Bill Nye, I’m keen to replay with a muscular brute or stealthy assassin. That urge for a replay is encouraged by the sheer number of side missions to complete, planets to explore and narrative threads to pull.

An argument could be made that Obsidian has only improved on a formula established 10 years ago rather than contributing anything new, but I don’t see that as a major issue. Story beats and character builds have rarely seen such high levels of interactivity in a big-scale RPG before, making it feel a big modern day step up from the likes of Skyrim and Fallout 4.