Surface Neo vs Galaxy Book S: If the Surface Neo is anything to go by, laptops could be about to get strange. By comparison, the Samsung Galaxy Book S looks a lot more conventional – but they do have one big thing in common.

The Surface Neo looks like it could be a world-first device in a couple of ways. The most obvious one is its folding design – but it could’ve also been one of the first laptops to bring a new processor to market. 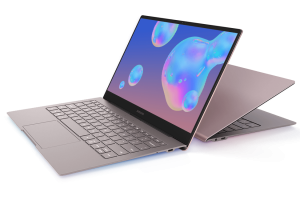 The new hybrid processor looks set to take on competitors like the Snapdragon 8cx – which is also available as an option for the Galaxy Book S – as CPUs move towards striking a new balance between power and battery life in smaller form-factors.

If you’re excited to pick up a device with the new Intel Lakefield processor then these machines will be among the top choices – let’s take a more in-depth look.

Beyond both devices housing a new Intel Lakefield processor (with the option of a Snapdragon 8cx for the Galaxy Book S), we don’t know a whole lot about the internals of these products.

The Intel Lakefield processor uses a combination of the performance-focused 10nm Sunny Cove CPU along with several smaller 10nm Tremont Atom cores, which are more power-efficient.

The Galaxy Book S will offer Intel LTE support on the Lakefield version of the device – but there is no confirmation if this is also the case on the Surface Neo.

Some specs of the Snapdragon version of the Galaxy Book S have been revealed and many are expected to carry over. This model has a 13.3-inch FHD display and claims it will have long-lasting battery life. 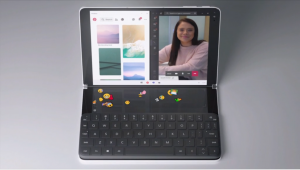 With a longer wait until the release date, details about the Surface Neo are even more scarce. We know the new foldable from Microsoft will run the company’s new Windows 10X – aimed at better accommodating folding and 2-in-1 form-factors.

Let’s crack on with the obvious talking point in this category – the unique design of the Surface Neo.

Rather than a folding screen like Samsung’s mobile device, the Galaxy Fold, Microsoft is opting for two touchscreens connected via a hinge. The new form-factor will be implemented with both the Windows-based Surface Neo and the Android-based Surface Duo.

The Surface Neo will weigh in at just 655g and just 5.6mm thin. The entire device is surrounded by Gorilla Glass – this allows for a Surface Pen to be attached to the back magnetically and receive charge.

There will also be a keyboard that can attach to the device and be flipped around to sit on top of one of the dual-screens for a more laptop-like experience. The Surface Neo will recognise this and display a contextual menu – similar to the Touch Bar on the MacBook Pro – in the remaining screen space. 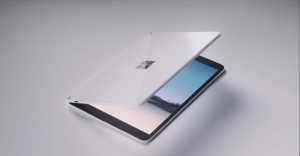 The Galaxy Book S is a lot more conventional-looking device but it does look to push that form-factor to its limits.

Samsung’s new laptop looks strikingly thin – increasing in thickness slightly on either side to offer one port that appears to be USB-C with a headphone jack also on one side.

The design of the lid is quite interesting and offers a feature becoming more common on laptops. The lid extends into a slight curve where it meets the other half of the laptop – meaning that the keyboard raises up from the surface for a better typing experience when the device is fully open.

The Galaxy Book S is expected to launch sometime in 2020 in the UK. The Snapdragon version of the laptop is already available in the US for a price of $999.

There is no pricing information for the Surface Neo just yet – but we’d expect it to cost a pretty penny. The new folding device will be launching in the “Holiday season” of 2020.