Sony’s ZD9 TVs redefined LCD TVs expectations when they launched in 2016. So it’s fair to say we’re seriously excited about what its long awaited successor, the newly announced Sony ZF9, might be able to achieve. Set to launch in the autumn, here’s our guide to where the ZF9 differ from – and hopefully improve upon – its illustrious predecessor. 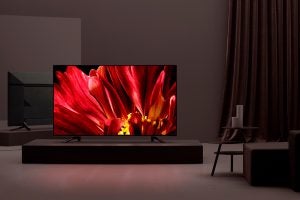 On the design front, aside from carrying a slightly differently styled rear panel, the only major difference is the way the Sony ZF9 sits on a pair of sharply angled feet, while the Sony ZD9 sits on a centrally mounted metal plate.

To me the Sony ZF9 feet look slightly comical versus the elegance of the ZD9 plate stand. But at least they carry channelling to help you hide your cables. Note that the ZF9s are only currently set to appear in 65-inch and 75-inch versions; there’s no word yet on a possible 100-inch ZF9 to replace the 100-inch ZD9.

During our study of the ZF9’s appearance, we also couldn’t fail to notice a pretty stunning new picture feature that gives it a major edge over not just the ZD9, but all LCD TVs released to date. Thanks to a new X-Wide Angle feature, you can watch the ZF9 from pretty much any angle without the picture losing either colour saturation or contrast. 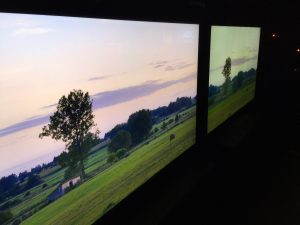 In fact, demonstrations suggested that the ZF9s are at least as good as any OLED TV when it comes to viewing angles. This is a massively important step forward for any household where one or more viewers routinely has to watch TV from an angle.

Sony wouldn’t be drawn on exactly how it has (exclusively) achieved this groundbreaking viewing angle feat, other than to say it was an ‘optical’ feature built into the panel structure.

The ZF9 mercifully sees Sony replacing the buggy Android TV interface found on its current TVs with a new Android Oreo implementation. This looks set to be far cleaner, more intuitive and less dictatorial than its predecessor. Though it’s perhaps a touch worrying that we only got the briefest of glimpses of Oreo in action, seemingly because it’s still not considered to be quite ready for sharing outside Sony’s labs.

Sony is notoriously unwilling to share TV specifications such as local dimming zone counts or maximum brightness outputs. What we do know is that the ZF9 follows the ZD9 in using a direct lighting system (where the LEDs sit directly behind the screen) in conjunction with a local dimming system that can control hundreds of separate zones.

Our feeling from what Sony said at its introduction to the ZF9 is that it doesn’t support more local dimming zones than the ZD9.  And may even support less. What is certain is that the processing being used to drive the dimming algorithms is far more powerful on the Sony ZF9 – and experience has shown before that this can actually be much more important than simply having the most dimming zones. 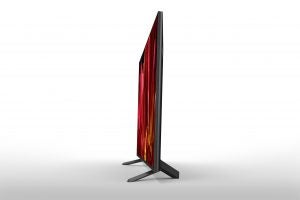 Part of the reason the Sony ZF9 can offer improved dimming processing is that it uses Sony’s new X1 Ultimate video processor. The ZD9, by comparison, uses the X1 Extreme processor. Ultimate is claimed by Sony to be around twice as powerful, and as such should be able to deliver better image processing results on the fly than even the impressive X1 Extreme engine could.

The Sony ZF9’s motion handling should comfortably outgun that of the ZD9, too, thanks to the new set’s X-Motion Clarity system. This leverages the direct lighting/local dimming capabilities of the ZF9 to manipulate the backlight only in areas where there’s movement to deal with. 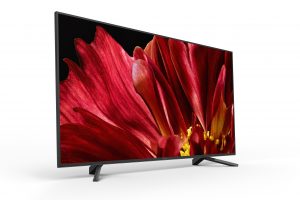 The result is the sort of natural look to motion associated with black frame insertion techniques, only without the overall picture dimness BFI usually causes.

X-Motion Clarity already worked fantastically well on Sony’s XF9005 LCD TVs, but it should be even more effective on the Sony ZF9 due to its extra dimming zones and processing power.

The Sony ZF9’s pictures are also likely going to see a shift in emphasis in some areas. That’s due to Sony’s new focus on trying to match its new Master Series TVs’ pictures as closely as possible to those of the legendary Sony BVM-X300 OLED mastering monitor.

Certainly it seemed at the ZF9 launch event as if Sony may be reducing peak brightness a little versus the ZD9, maybe to match colours more to the look of the OLED monitor. Plus it felt as if Sony might be sacrificing some black level depth on the ZF9 in return for getting shadow detailing to look closer to that of the X300.

We’ll need to get a review sample before we’re able to confirm these initial picture impressions, though. 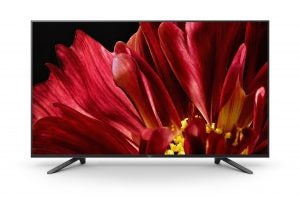 Trying to match the Sony ZF9’s pictures to those from an X300 mastering monitor is not the only new feature aimed at delivering pictures ‘as their creators intended them to look’. Particularly eye-catching is a new Netflix Calibrated Mode. Activate this while watching Netflix on the ZF9’s built-in app, and the TV’s picture settings will change to deliver images with values – including refresh rates – that track those Netflix used when it was creating its content.

Alongside the new Sony AF9 OLED TVs, the ZF9s are also Sony’s first TVs to carry full colour management for end-user calibration. There’s even a new app developed in conjunction with calibration specialists SpectraCal which lets you run an automatic calibration if you have the right measuring gear.

There’s no information yet on how the ZF9 pricing might compare with that of the ZD9, or if there are any significant sound quality differences.

Overall, while the Sony ZF9 might not have evolved from the ZD9 in all the directions we’d perhaps expected, there’s more than enough new stuff going on to already make it look like a genuine LCD game changer. Look out for a review in the next two to three months.