Sony has taken the wraps off a new range ‘Sony Master Series’ high-end TVs. These include new 55-inch and 65-inch AF9 OLED TVs, set to launch in the autumn. With the Sony AF8 OLED TVs still pretty fresh in our minds, can the Sony AF9 really have enough new stuff to tempt us?

The most instantly obvious difference between the AF9 and AF8 are the two sets’ aesthetics. For starters, while the AF8s stand bolt upright, the Sony AF9s lean back slightly (like the Sony A1 OLED TVs). Some will find this elegant and lovely, others may find it a bit annoying. Though given that the AF9s are arguably designed to be placed directly on the floor while the AF8s are meant to be placed on furniture, I’d argue the slight tilt makes at least some practical sense.

The Sony AF9 TVs also resembles the older A1 models more than the AF8s. They present viewers with nothing but the TV’s screen. An elegant effect it achieves by supporting the screen on a photo frame-style pull out rear leg, rather than a traditional stand.

This support leg (which can fold in to become a chunky wall mount) differs from that of the A1’s by being pretty much all covered in a felt finish. It connects to two side-firing subwoofer speakers which should easily beat the A1’s single rear-firing sub. 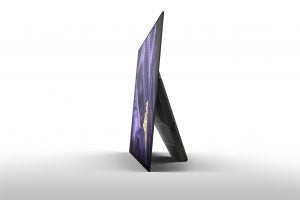 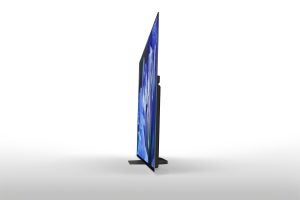 The Sony AF9s’ audio is much more powerful than that of the AF8s. Overall power output is pretty much double that of the AF8s at 98W, and the speaker configuration has shifted from 2.1 to 3.2.

The ‘.2’ bit of that number describes the two side-firing subwoofers in the rear leg support. The ‘3’ bit, though, is the most interesting. While the Sony AF9 joins the AF8 (and A1) OLEDs in cleverly using its screen to produce its sound, it crucially adds a third actuator to the previous models’ two.

This extra ‘screen exciter’ sits in the TV’s middle, to create a stronger centre speaker effect. As well as helping the sound enjoy more power, the new central actuator should reduce a key issue we had with the AF8, where voices could at times sound misplaced on the screen when you viewed it from an angle.

The Sony AF9’s audio differs from that of the AF8, too, by supporting a new ‘Center Speaker’ mode. Activate this and all of the AF9’s built in speakers work together as a centre channel speaker within an external surround sound speaker system. This is a clever idea given that external centre speakers are notoriously hard to position effectively.

Centre channel sound in such a full speaker system arrangement is passed to the TV via two screw/banana plug cable inputs, and the TV’s sound levels can be adjusted via whatever amp you’re using to power your surround sound speaker system. 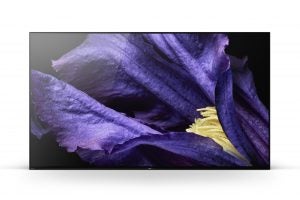 The Sony AF9 differs from the AF8 in a number of ways when it comes to picture quality.

For instance, it features a new Pixel Contrast Booster OLED panel driver. Sony claims it’ll deliver more punchy but also more subtle colour toning, especially in the brightest parts of HDR pictures. Confusingly Sony isn’t claiming that this new feature actually increases the panel’s brightness or colour volume. It should, though, deliver both higher average brightness levels and more colour tone finesse – both of which would be important enhancements over the AF8.

The Sony AF9’s new X1 Ultimate processor is another big differentiation. It’s claimed to be around twice as powerful as the already class-leading X1 Extreme processor found in the AF8. As such, it should do a much better job with key features such as upscaling HD to 4K; converting standard dynamic range content to HDR; removing colour banding artefacts with HDR; and enhancing the sense of sharpness, depth and colour finesse of even native 4K HDR content.

While Sony didn’t, sadly, do a specific X1 Extreme vs X1 Ultimate head to head at its recent launch event, there was enough evidence on show to suggest that it is a real step forward – especially when it comes to clarity, SDR to HDR conversion, shadow detail and the handling of tonal subtleties in the brightest HDR picture areas. 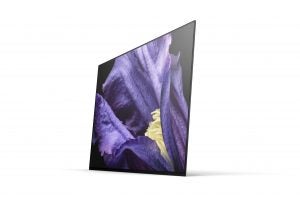 A key ambition of Sony’s new Master Series TVs is to deliver pictures that look like their creators’ intended. With this in mind, the AF9’s images have been tuned to track as closely as possible to the pictures produced by the renowned Sony X300 OLED professional mastering monitor.

Sony has gone the extra mile with regards to its new focus on accuracy by providing the AF9 with a Netflix Calibrated Mode. This automatically adjusts your AF9’s settings when you’re watching Netflix shows to best match the look the creators were going for in the mastering process. 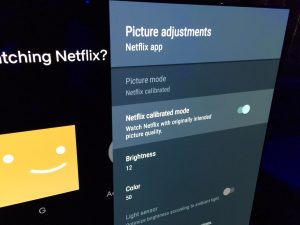 On top of this, the AF9s even boast a full colour management system and various other calibration tools. This is the first time Sony has supported after-sale calibration on any of its TVs (though the AF8 and AF9 both undergo in-factory calibrations before they’re released to retail).

One last potentially (hopefully) really significant change the AF9 delivers over the AF8 is Android Oreo. Sony only gave us the briefest glimpse of Oreo in action on the AF9  (it’s still something of a work in progress), but it seems set to deliver a far more engaging, friendly and slick operating system than the tired old Android TV platforms Sony’s last few TV generations have struggled with. And it doesn’t seem likely at this stage that Oreo can be added to the AF8 via a firmware update.

We’ll bring you a full review of a Sony AF9 OLED just as soon as we can get hold of a production sample.