Samsung’s smartphone woes could get a lot worse, as new evidence suggests that the Galaxy Note 7 might not be its only dodgy smartphone.

A Galaxy S7 Edge owner from the Philippines has complained that her smartphone caught fire for no apparent reasons. Weng Briones posted images of a completely destroyed S7 Edge handset, claiming that the phone began to heat up and smoke while her 16-year-old daughter was using it. Fortunately (and unsurprisingly), Briones says that Samsung was completely willing to resolve the situation quickly.

“We went to Samsung store at SM City Taytay and they have refunded my money in full,” wrote Briones. “Kudos to all the staff of Samsung SM Taytay for their immediate action regarding my issue. In spite of the unfortunate incident, I am however, impressed by their after-sales support. Much respect to Samsung. Keep safe everyone.” 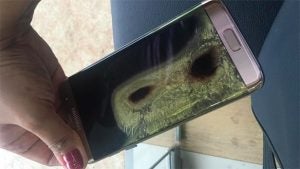 The Samsung brand has been mired in controversy after being forced to recall its brand new Galaxy Note 7 smartphone, which launched in early August. On September 2, the company issued a global recall for the phone, after an internal investigation uncovered a serious battery flaw that was causing some users’ handsets to spontaneously catch fire.

It’s not clear whether the battery issues affect other handsets, including the Galaxy S7 Edge; Samsung has not issued any guidance or statements regarding other phone models. As such, we can’t say for sure whether the Galaxy S7 Edge is affected by any faults. In any case, it’s worth sticking to good phone owner etiquette, and charging your phone on hard, flat surfaces, and remembering not to have it covered while plugged in. 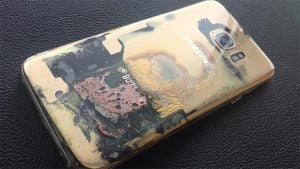 It’s also worth bearing in mind that Samsung has already received a healthy serving of phoney (excuse the pun) complaints. The firm recently revealed that 26 “false reports” had been sent in from supposed Note 7 customers since the recall began. Of those 26 reports, Samsung only actually received 12 handsets, none of which were faulty. In a further seven of the cases, Samsung was not able to reach the supposed victim. And the remaining seven alleged customers either cancelled the complaint, or purported to have thrown their handset away.

One report involved a supermarket worker in South Korea that Samsung couldn’t get in contact with, but whose phone allegedly exploded. Then there was a user from Singapore that said they threw their phone out of their car after it caught fire, but couldn’t prove any of the details. And a Canadian user simply found a photograph of a burned Note 7 online and pretended it was his own handset – without success.

We’ve asked Samsung for comment and will update this article with any response.

Do you own a Galaxy S7 Edge? Have you experienced any problems? Let us know in the comments.