Interestingly, while the Samsung Galaxy S10 and S10 Plus move a step away from their predecessors on the design front, they arguably take a step towards the Galaxy Note 9. Their appearance is altogether squarer than before, which suggests that Samsung took a few cues from its own brilliant phablet family. However, both the Galaxy S10 and the S10 Plus also kick things on a fair bit.

Most notably, these new Galaxy devices are almost all-screen. With a 93.1% screen-to-body ratio, we’re getting closer to true bezel-free status than we’ve ever been. That’s a considerably higher figure than the Galaxy Note 9’s 83.4%, at any rate.

Samsung has created this 10% gap by eating into the forehead and chin area of these new S10 devices. The bezels are super-slim compared to their Note 9 counterparts, to the point where the front-facing camera has to be housed within the display itself – an effect Samsung calls the “Infinity-O” display. The Galaxy Note 9 selfie-cam gets to luxuriate in its own thick border.

All these phones feature curved-edge displays, with side-bezels having been absent from Samsung’s flagship design handbook for some time. This should tell you that the Galaxy S10’s display is slightly longer than the Galaxy Note 9’s. It’s a 19:9 affair, compared to the older phone’s 18.5:9 aspect ratio. Despite this, the Galaxy Note 9’s screen remains bigger than the base S10 (6.4-inches versus 6.1-inches), although wider and shorter than the 6.4-inch panel on the S10 Plus.

From the rear, these devices look remarkably similar. In fact, the only difference is this year’s Galaxy’s triple-camera module. The Galaxy Note 9 has “only” the two.

As for the edges, all three phones pack a USB-C port and a 3.5mm headphone connector. Samsung is clinging on to that legacy audio standard, and we love the company dearly for doing so.

Time to use those Argos gift cards to buy yourself one of the most stylish and affordable flagship phones on the market – especially with the Canary Yellow design that can't be found on other Galaxy devices.

If you're after a bit of data to go with your brand new Galaxy S10 then Argos has you covered – giving you a free PAYG SIM right out of the gate. Credit plans are also available. 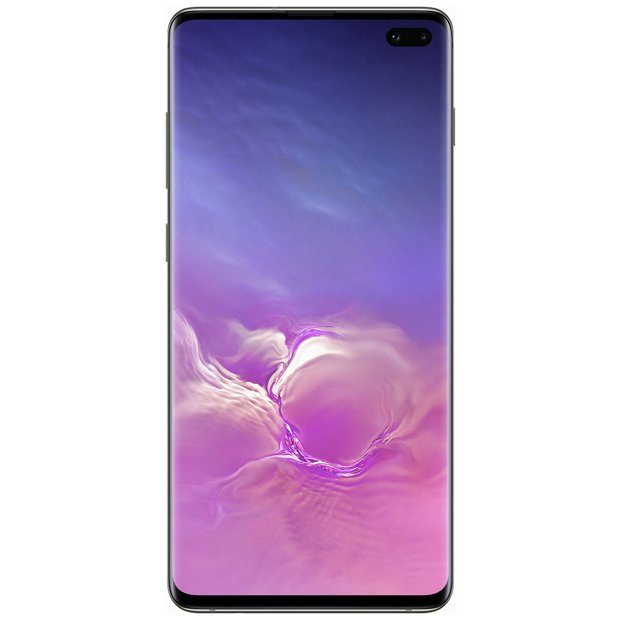 Argos has a range of credit options to help you afford the brand new Galaxy S10 Plus. The retailer is also offering a free Pay As You Go SIM with each purchase, helping you to get the most out of your new phone.

The Samsung Galaxy S10 and S10 Plus’ screens look even better. We’ve already mentioned their extended aspect ratios, but that’s not the only change.

The Galaxy S10 screen gets ridiculously bright for an AMOLED panel, with a maximum brightness of 1200 nits max. The Galaxy Note 9 was capable of hitting 1130 nits.

HDR10+ compliance is present and correct on both S10 variants, trumping the Note 9’s standard HDR10 support. Last year, DisplayMate reported that the Galaxy Note 9 could hit 0.5 JNCD (Just Noticeable Color Difference), which translates to almost perfect colour accuracy. The Galaxy S10 gets even closer to perfection, to the tune of a 0.4 JNCD.

One noteworthy new feature of the Galaxy S10 handsets sits just beneath those beautiful displays. They adopt an in-display fingerprint sensor, so you’ll be able to rest your thumb on the lower portion of the screen to unlock the phone.

What’s even more interesting is that the Galaxy S10 adopts ultrasonic fingerprint technology, which is more secure than the optical efforts we’ve seen from the OnePlus 6T, for example. It’s certainly way ahead of the Galaxy Note 9’s traditional rear-mounted sensor – although, of course, it remains to be seen if it’s as quick or reliable.

Talking of changes under the hood, the Samsung Galaxy S10 line sees a considerable bump up in power over the Galaxy Note 9. You get either a 7nm Qualcomm Snapdragon 855 or Samsung’s 8nm Exynos chipset, depending on where in the world you purchase the device. The Galaxy Note 9 comes with a 10nm Snapdragon 845 or Exynos 9810.

That’s supported by 8GB of RAM as standard on the Galaxy S10 and S10 Plus; you have to splash out for the larger 512GB model of the Galaxy Note 9 to get the same headroom. The smaller 128GB model has just 6GB of RAM.

While the Galaxy Note 9 has a larger battery than the standard S10 (4000mAh versus 3400mAh), the Galaxy S10 has an additional trick up its sleeve. You can charge other wireless devices with the phone by way of Wireless PowerShare, which should come in handy with the new Galaxy Buds. The same feature can also be found on the S10 Plus – and it does boast a larger 4100mAh cell, compared to the Note 9.

The most unique feature in the Galaxy Note 9 is, of course, its S Pen. Each phablet packs an advanced stylus that allows you to scrawl notes and draw pictures on the screen, as well as acting as a remote control for the camera and other applications.

All three phones have a 12-megapixel primary sensor with dual-pixel autofocus, optical image stabilisation, and an adjustable aperture that can switch between f/1.5 and f/2.4. In each case, this is accompanied by a 12-megapixel telephoto sensor with an f/2.4 aperture and OIS for a proper 2x optical zoom.

However, the Galaxy S10 and Plus also add in a super-wide-angle, 16-megapixel, f/2.2 aperture fixed-focus sensor.

One of the only differences between the Galaxy S10 and its Plus brother is that the smaller phone lacks a secondary front-facing camera for depth detection tricks. This places it a little closer to the Galaxy Note 9 on paper, although differences remain.

Samsung Galaxy S10 / S10 Plus vs Note 9 – Price and availability

Bring this 10GB plan down with up to £144 to claim in cashback in this affordable O2 plan.

Enjoy 60GB of data and benefit from the reliable O2 mobile network with its O2 Priority benefits.


We continually check thousands of prices to show you the best deals. If you buy a product through our site we will earn a small commission from the retailer – a sort of automated referral fee – but our reviewers are always kept separate from this process. You can read more about how we make money in our Ethics Policy. 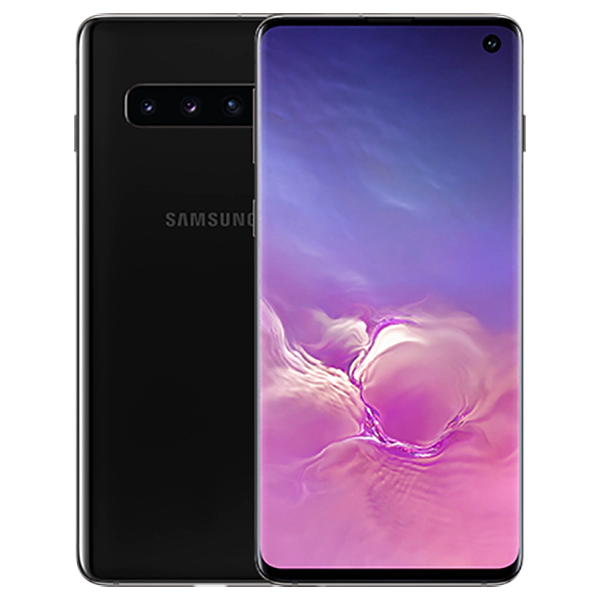 With each new purchase of a Galaxy S10 Plus, Samsung is also throwing in a £50 Ultra Thin Wireless Charger absolutely free. Trading in your old smartphone can also save you up to £300 off your brand new device. 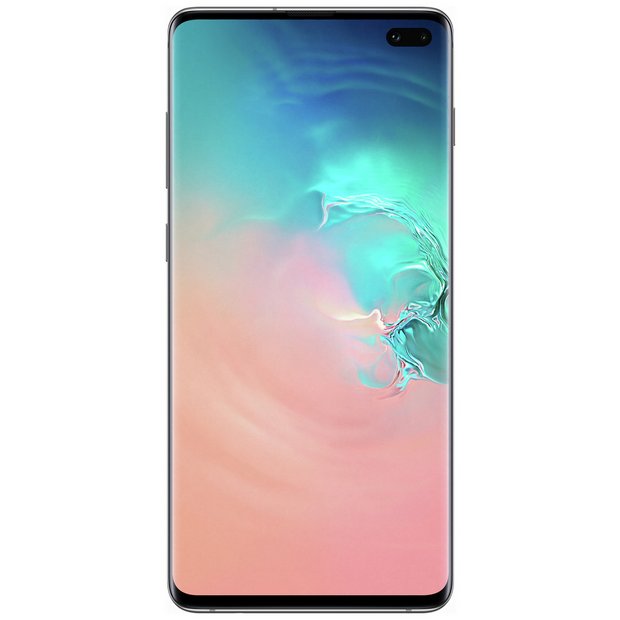 Argos has a range of credit options to help you afford the brand new Galaxy S10 Plus. The retailer is also offering a free Pay As You Go SIM with each purchase, helping you to get the most out of your new phone.

A perfectly balanced Galaxy S10 Plus contract that also gets you a sizeable amount of data. Throw in access to early gig tickets and weekly freebies via O2 Priority and you have yourself a winner.

Pay absolutely nothing upfront for the Galaxy S10 Plus and get double the data at no extra cost – talk about a bargain.

Obviously, the Samsung Galaxy Note 9 is available right now. It’s been a constant retail presence since its August 2018 release window.

The Samsung Galaxy Note 9 still has its fans, and we’re among them. It remains one of the finest phones on the market, even after the Samsung Galaxy S10’s launch. If you want a highly capable all-rounder with a stylus, it’s still the best option.

However, there’s no getting away from the fact that the Galaxy S10 and S10 Plus both offer improvements across the board. They’re sleeker and more powerful, and include more sophisticated cameras and brighter screens. Right now, they simply offer better value for money.