If the idea of cracking open a $2000 piece of hardware to see what makes it tick fills you with a sense of dread, then look away now. Someone on the Chinese social network Weibo has broken their Samsung Galaxy Fold – only intentionally this time.

As you might imagine, it’s a mighty complicated bit of kit as the pictures below demonstrate. 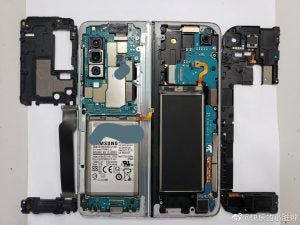 Take the hinge mechanism which allows the Fold to live up to its name. It consists of five components which all need to be lined up perfectly for the device to function. In short, if they’re not lined up absolutely perfectly, the hinge can damage a screen which already sounds a touch fragile.

While the mystery dismantler does say the screen is fragile, it’s not the one you’d think. In fact it was the smaller 4.6-inch front screen that shattered during the process, while the foldable number was pretty straightforward. Perhaps that’s not so surprising given we’re some way away from foldable glass – our Weibo hero described it as “like rubber” in any case. 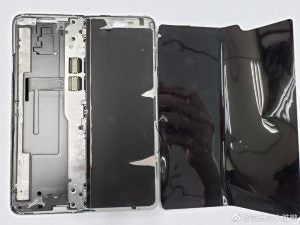 The two sides of the Fold are connected via a couple of ribbon cables, and the device contains two batteries of different dimensions. Whether that means they have different capacities isn’t clear – this pre-release model merely states “TBD mAh, TBD Wh”, so your guess is as good as ours.

If it wasn’t immediately obvious by looking at the pictures, let me make it explicit: this is going to be a tricky phone to fix, should anything go wrong. Not only is it immensely complicated, but Samsung isn’t even planning on making that many of them, so high street repair shops won’t have much opportunity to practice their craft. 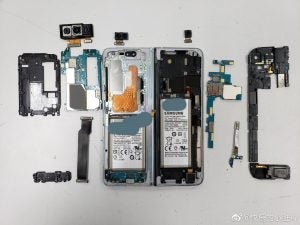 If ever there were a handset to warrant some robust mobile phone insurance, this is it.

Does the Galaxy Fold look like you expected on the inside? Let us know on Twitter: @TrustedReviews.