CES is in full swing and we’ve seen a number of impressive concepts already, including a new demo of Intel’s untethered AR headset. But we might have just found our favourite.

Razer has been using the tech show in Vegas to show off its Project Valerie system: laptop that packs in three, yes three, 17-inch 4K displays.

And for the creative types out there, Razer’s provided 100% Adobe RGB colour accuracy and what it’s calling “the greatest amount of screen real estate ever assembled in a single computer”.

So, how does Project Valerie manage to include three displays while still being called a laptop? Well, as Razer explains, the concept design uses an “automatic deployment mechanism” which means each display mechanically slides out of the side of the main screen, once it’s folded open.

“The complexities of a traditional multi-monitor setup are a thing of the past with Project Valerie,” said Razer co-founder and CEO Min-Liang Tan.

“Equally important, the power of a desktop computer and graphics capabilities of three top-end monitors are included in the system. There is no shortcoming in the way of performance in the face of its amazing portability and features.”

Running the graphical side of things is an Nvidia GeForce GTX 1080, and the impressive laptop exceeds the minimum hardware requirements for the HTC Vive and Oculus Rift. 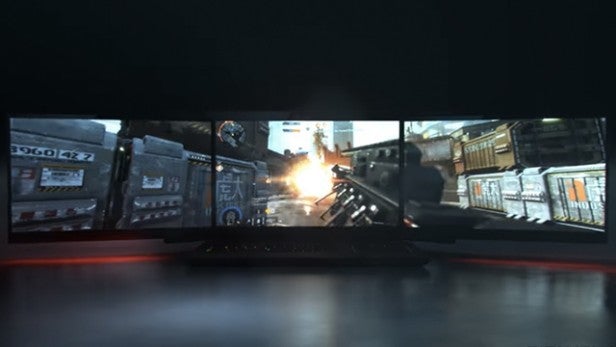 On top of that, the company has added its “Ultra-Low-Profile” mechanical switches, which means key presses are registered with 65 grams of force, so it should feel like using a full-size mechanical keyboards.

Of course, there’s no guarantee this will ever make it to market. Project Valerie is currently a working prototype and there doesn’t seem to be any plans to put it into production.

But, we’re hoping Razer goes ahead with this one, frankly because it looks really cool.

Let us know what you think of Razer’s concept design in the comments.