The Pixel 4 may be a long way off, but that hasn’t stopped people speculating about how it’ll look. And now, thanks to a sketch posted on SlashLeaks, we might have something a bit more concrete to pin rampant speculation to.

I say ‘might’, because there’s always a chance that this is a fake, but it wouldn’t be wholly surprising if Google picked this kind of design for the Pixel 4. It has the usual two-tone design on the back, with a small Google logo near the bottom, and makes room for the front-facing dual-camera array debuted in the Pixel 3 – albeit this time in a pinhole, like the Samsung Galaxy S10. That means that, if true, there will be no giant notch of the kind seen on the Pixel 3 XL. 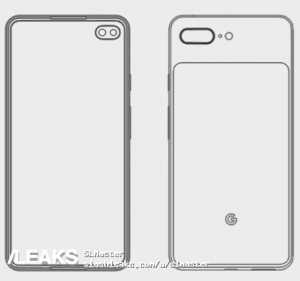 One big departure for Google is the inclusion of two cameras on the rear of the phone. Bucking the fashion of throwing more cameras at the back of the phone that some manufacturers have endorsed, Google has so far kept a single lens on all its phones, and the results have still been splendid. It’s exciting to think of what results Google could achieve with a second lens, no matter what it ends up doing.

Interestingly, this design is almost identical to a pair of recent fan renders that recently did the rounds. That possibly increases the chances of this leak being a fake based on previous renders, though it could equally just be a sign that this is the kind of sensible design that Google’s engineers are aspiring to. We’ll have to wait for more leaks to find out one way or the other.

Does this render look legitimate, or do you think it’s a fake? Let us know what you think on Twitter: @TrustedReviews.