A whole host of new laptops have been launched at the IFA 2017 trade show in Berlin, and many of them come equipped with Nvidia GeForce MX150 graphics. What is it, how powerful is it and should you care? We take a look.

For many laptop buyers who like gaming, the promise of dedicated or discrete graphics is like a red flag to a bull: it means extra performance in the latest 3D games. The MX150 is a replacement to the GeForce 940MX that has appeared in loads of laptops over the last couple of years. MX150 was first announced in May, but it’s taken until the end of August 2017 to start appearing in laptops we can buy.

It’s also a replacement for any Intel HD (now called UHD) graphics hardware that comes baked into your laptop’s processor. Intel graphics have never been known for their gaming performance, so it’s easy to dismiss nearly every laptop without a discrete GPU as something to avoid.

So far, we’ve not had an MX150 laptop in to test, but Nvidia has provided some its own figures to give you a rough idea of what performance to expect. First and foremost, the MX150 is not a high-end GPU. Nvidia’s marketing material on the MX150 only makes mention of playing eSports games such as Dota 2, CS:GO, LoL and World of Tanks at Full HD resolution at 60fps.

The company doesn’t make any claims about what graphical settings you’ll be running, although this point is fairly moot as we’d recommend you let Nvidia GeForce Experience software take over and do the heavy lifting to decide what graphics settings you should be running at.

So, eSports only, then? Maybe, but we can use some other data to see how more advanced games will run.

In our recent review of the HP Spectre x360 15, we ran some benchmarks on the included 940MX GPU. There we saw performance of 50fps in Dirty Rally at Full HD, Medium settings, and 30fps in Shadow of Mordor at Full HD.

Nvidia claims the MX150 is 25% more powerful than the 940MX (and 4x more powerful than last-generation Intel HD Graphics 520), so from that we can take away that while this GPU isn’t designed for the latest AAA games, it can technically run them if you dial down graphics settings and/or resolution.

Again, if the game is supported by GeForce Experience, Nvidia should automatically be able to set your game up for the best performance/eye-candy compromise. 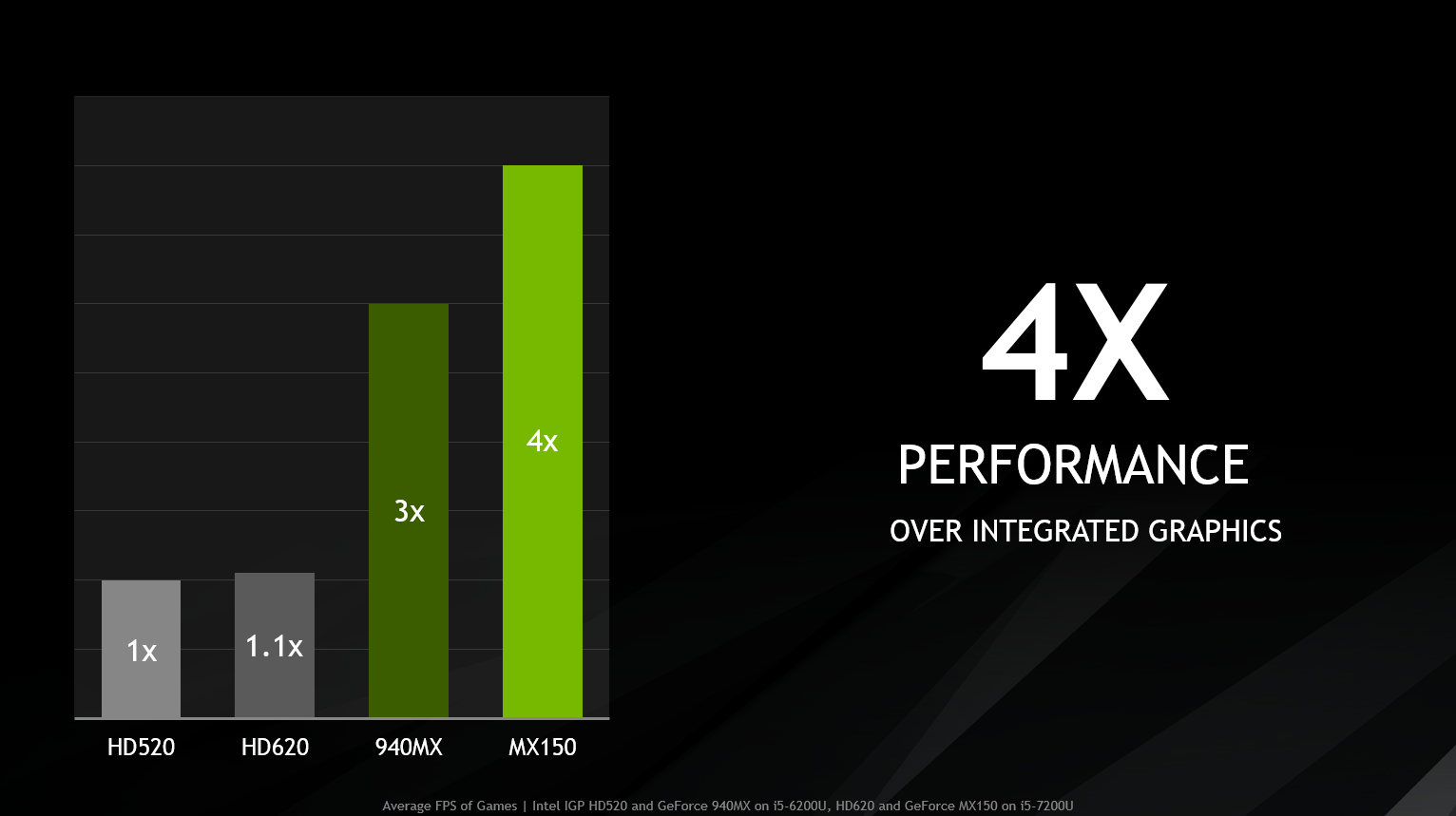 The thing you should take into account here is that this GPU will often be found in laptops with relatively low-power 7th- and 8th-generation Intel Core CPUs. These chips will often be a bit of a bottleneck for your games – some more advanced titles such as Battlefield 1 – struggle without a properly beefy processor, no matter how good your GPU is.

The MX150 is a dab hand at photo editing in Adobe products, according to Nvidia. The company reckons you’ll be able to crop and remaster photos up to 2.5x faster than bog-standard Intel HD Graphics, and up to 4x faster colour remastering when working with video content. 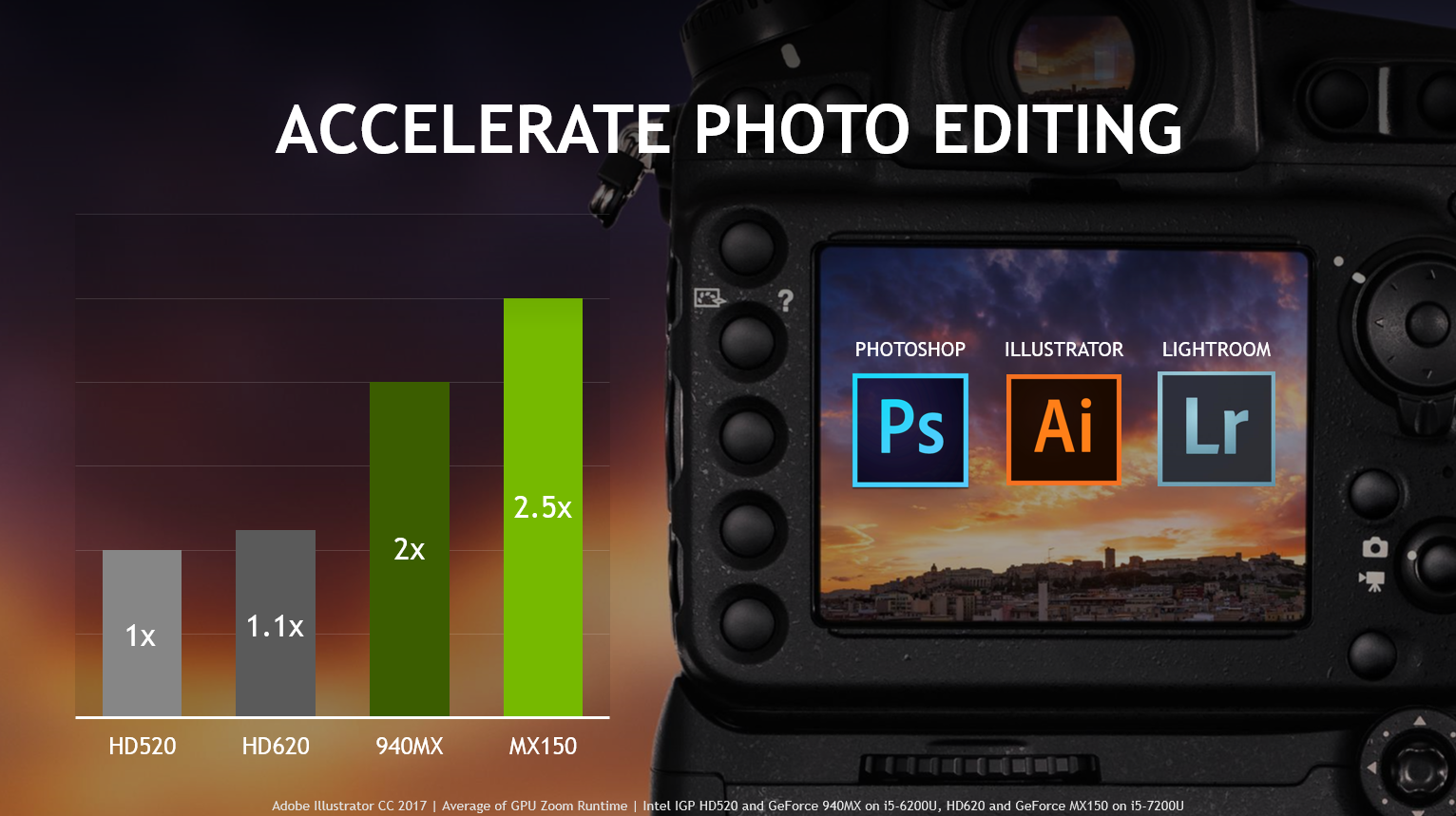 Should I buy a GeForce MX150 laptop?

Until we’ve tested one for sure we can’t give a definitive verdict, but we can offer some general advice. GeForce MX150 will probably find itself in thinner and lighter laptops than the full-desktop-style GPUs such as GTX 1050 and 1050 Ti. If you’re really after a gaming laptop, consider a thicker and heavier machine. If you want thin and light and want to play older or eSports titles, these new MX150 should fit the bill. Check back here when we have more on the MX150’s benchmark results.