One of the biggest players in the smart home market, Nest has managed to produce a range of distinctive cloud-connected gadgets.

The company has already churned out the Nest Thermostat, Nest Protect smoke and carbon monoxide alarm, and the Nest Cam, with its reliable motion detection and stellar image quality.

And now, the firm has decided to bring its home monitoring camera outside with the introduction of Nest Cam Outdoor.

The new outdoor security camera is capable of shooting video in 1080p, has an impressively wide viewing angle of 130 degrees, and includes night vision.

Nest has also ensured the camera is waterproof enough to survive the elements, although the cameras IP65 rating means it can’t be fully submerged – not that that’s something you’d worry too much about anyway.

Waterproofing also extends to one of the camera’s more novel features. i.e. the IP67-rated cable which runs from the base of the camera itself to an adapter, and mains plug.

Yes, Nest’s outdoor security camera doesn’t run on batteries and actually requires being plugged in to an outdoor wall socket in order to work.

Related: Nest vs Hive: Which is the best smart thermostat? 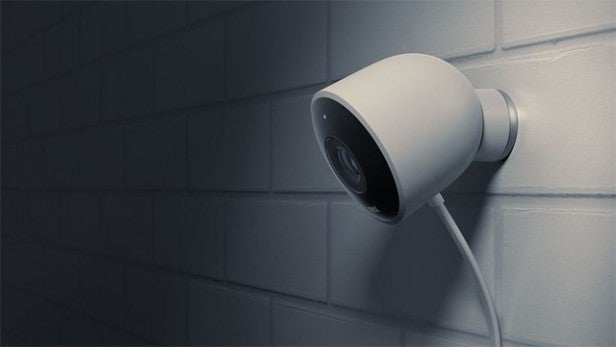 Nest itself was keen to extol the virtues of such a setup, with Lionel Guicherd-Callin, Head of European Product Marketing telling TrustedReviews: “You have to think of the context. You have this camera installed, the cable is secured with the wall clips, which are screwed to the wall and not nailed to the wall, so it’s very hard to remove them.

“And, we will see you coming as well. We have a huge field of view, it’s not a narrow one where you can sneak in the back, we see you coming, and as a user you’ll get a notification.

“In all these circumstances, it’s going to be very hard for a burglar to actually get to the point that he can cut the cable, or steal the camera if he wants to, because he’s been recorded, he’s been seen.

“And also, burglars, when they see this type of device, they usually look for another home.”

Once the wall mount is installed, the camera itself snaps into place magnetically – convenient but perhaps less secure than consumers might have hoped.

What’s more, the built in speaker and microphone means you’ll be able to speak to any intruders, or even delivery men, directly through the camera itself by using an app on your smartphone.

Alongside the new hardware, Nest is introducing an upgrade for its software, which gives it the ability to detect human figures in a pre-defined area, allowing users to tell the camera to ignore movement in particular spaces and only report action in, say, their porch area.

Related: Smart bulbs in the UK – which should you pick?

The upgrade, based on research by Google, also makes the software able to distinguish between types of objects, which should hopefully cut down on false alerts.

Users can sign up to the Nest Aware service to have access to new software features come September, as well as the previous 10 or 30 days recorded footage, depending on which subscription they choose. Otherwise, you’ll just have access to the live feed itself via the Nest software.

And finally, the Nest app has been updated to include a new Spaces feature which groups Nest products by rooms in your house.

The Nest Cam outdoor is due to launch in the US in September for $199, while the UK can expect to see a release before the end of the year.

UK pricing is still being worked out, but Nest says it hopes to make it the same price as it is in the US, meaning you’ll hopefully be able to pick one up for around £150.

What do you think of Nest’s new camera? Let us know in the comments.