When foldables emerged onto the smartphone scene, few expected the Motorola Razr to make a comeback. It turns out the iconic 2000s flip design makes a perfect home for a foldable display and, if recent leaks are to be believed, one of the biggest reboots of 2019 may just be getting a sequel. Here’s everything you need to know about the Motorola Razr 2020.

We were able to try out the 2019 Razr last year and, while we enjoyed the seamless display and Y2K nostalgia, the size of the 6.2-inch screen was underwhelming and the camera system and battery life left something to be desired. Nevertheless, it seems the Razr is back for 2020. We’re excited to see how Motorola will improve upon the 2019 iteration and whether it will stay true to the V3’s original design.

Read on for all we know about the Motorola Razr 2020 so far, including all the latest information, leaks and rumours about the foldable smartphone.

Motorola Razr 2020 release date – When will it be released?

The Motorola Razr 2020 is rumoured to launch in September.

We first heard confirmation of the Motorola Razr 2020 back in May, when a Lenovo executive hinted at a second-gen phone on the Reframed Tech podcast. The executive also revealed that the foldable is expected to launch around September, just 10 months after the first Razr hit shelves last November (via Android Authority).

Unfortunately, Motorola has not been immune to the delays Covid-19 has caused across the tech industry. According to display industry insider Ross Young, the Razr 2 will be delayed a quarter due to the pandemic and likely will not be available until 2021.

Motorola is yet to give any indication as to how much the Razr 2020 will cost.

However, if the price is anything like the Razr 2019 it won’t be cheap. The foldable debuted at a hefty £1499.99 – £400 less than the Samsung Galaxy Fold and £200 more than the Galaxy Z Flip. While the price isn’t surprising for a foldable, it definitely isn’t the most budget-friendly smartphone on the market.

The Razr is also rumoured to be getting 5G this year, which could certainly drive up the price if Motorola resists cutting costs in other areas.

Read our review of the Samsung Galaxy Fold

Motorola Razr 2020 features – What features will it have?

According to a source speaking to XDA Developers, the Motorola Razr 2020 will be powered by the Qualcomm Snapdragon 765 chipset, have 8GB of RAM, 256GB of storage and a 2,845mAh battery – a much-needed upgrade from the Razr 2019’s 2,510mAh battery.

The phone will apparently run Android 10 out of the box and users will be able to take advantage of next-gen 5G connectivity thanks to the Snapdragon X52 modem. The report also explains that the rear camera will be upgraded to 48MP and the front camera to 20MP. 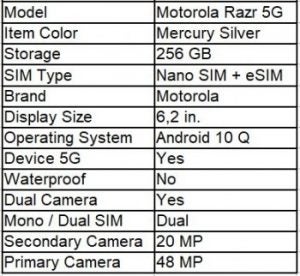 The 5G support, camera and additional information of a 6.2-inch display – the same as the 2019 model – has also been suggested in a leak by tipster Evan Blass (via CNET). Blass also revealed the new Razr will hold a physical SIM card and come in a new Mercury Silver colour (via GSMArena). The spec sheet also suggests a dual-camera layout, meaning the 48MP sensor may be joined by another camera on the rear.

This month, the second generation Razr was spotted passing through the 3C certification by Mysmartprice. According to the report, the Razr 2020 will feature 18W fast charging and 5G compatibility. 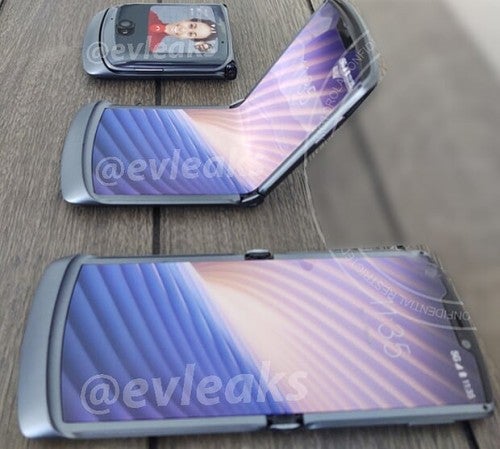 The latest news comes in the form of renders that give us a good look at the 2020 Razr. The images, which were shared by Blass on Twitter (via GSMArena), show off the smartphone folded, unfolded and in action. Overall, the phone looks strikingly similar to its predecessor, staying relatively true to the 2004 V3’s design. Small differences between the 2019 model and these new images include a smaller chin, no visible fingerprint scanner and a dual-camera layout.

Rumours of side sensors and an in-display fingerprint reader for the Razr 2020 actually appeared before the first Razr was released thanks to a patent Motorola filed with the USPTO and WIPO in May 2018 (via LetsGoDigital). If Motorola follows through with the patent, that might explain where the fingerprint scanner has relocated in the renders.