The Razr 2019 is a phone brimming with nostalgia and this is both a positive and a negative. Like the Galaxy Fold, the Razr 2019 feels like a first-gen product and will likely only be for a very select few. Due to way it folds you're not really getting anything over-and-above a regular 6.2-inch phone – aside from the fact it's very small in your pocket. Is this enough of a benefit to forego a truly high-end, multi-camera system and battery life that won't need babying? I am yet to be convinced. What I can say with confidence is that this is a gorgeous, fantastically well-built smartphone that feels a lot more complete than the Galaxy Fold. The way the display folds without leaving a huge crease on the display is a massive plus for me.

The Motorola Razr (2019) takes one of the most iconic phones of all time and brings it up-to-date with a folding display that does things very differently to the Samsung Galaxy Fold. Say hello the rebirth of the flip phone.

Ever since rumours of a Motorola Razr resurrection began earlier in the year, the hype for this phone has been building. And now it’s here – the Motorola Razr (2019) complete with a design that evokes the original Razr V3, but with a truly futuristic folding display. If you thought phones in 2019 were beginning to tire and get a bit stale then you might need to think again.

Let’s get pricing and availability details out of the way first. You’ll be able to pre-order the Razr from mid-December and units will begin shipping early January 2020. In the US it’s a Verizon exclusive, while us here in the UK will have to buy it through EE. There’s also no SIM tray on this phone and it purely uses an e-SIM (like the Apple Watch 5, for example) so that’ll likely make it tricky to use it on any other network.

Pricing in the UK has yet to be determined either, however it won’t come cheap. In the US it’ll cost $1499 so we’d expect a similar price when it arrives.

If you have any sort of nostalgia for the 2004 Moto Razr V3 then holding the new 2019 Razr will bring countless memories swirling back. There’s so much classic Razr DNA here and it feels far from a cheap cash-in on a brand that has been dormant for nearly a decade.

This is still a ‘flip phone’ with a smaller display on the outside and the main screen inside. However, when you open the Razr you’ll be met with all-screen – no T9 keyboard in sight. The 6.2-inch foldable pOLED display is the headline feature of the Razr (2019) and it’s a stunning feat of engineering, clicking into place with a satisfying ‘thud’ and without the annoying crease across the panel you’ll find on the Galaxy Fold. 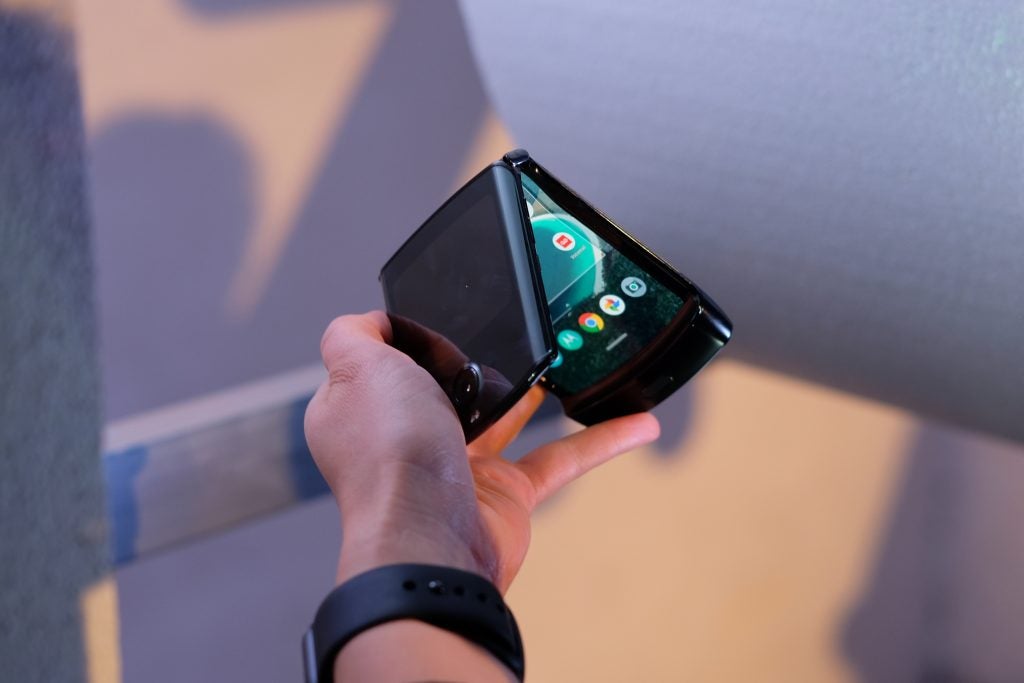 The Razr remains a clamshell phone

When it’s unfolded the display measures 6.2-inches, with a 21:9 aspect ratio that’s similar to some of Sony’s flagship this year. it’s long and narrow but should deal with apps and the majority of games just fine. It’s a nice looking screen – albeit one that’s not the sharpest around – that doesn’t feel quite as delicate as Samsung’s foldable effort. During the UK launch Motorola reps were keen to assure everyone that this wasn’t a phone that needed to be handled with any more care than your typical smartphone.

While there might not be a crease on the display, there is a slight slant to the upper portion of the display and it doesn’t quite sit flush with the hinge.

The secondary 2.7-inch display sits on the outside and works in very much the same way as it did on the Razr V3. It doesn’t give you full access to Android, instead acting as a small window to give you glanceable information like the time, messages and currently playing music. You can reply with canned responses and even access the camera with a quick shake of the phone. Flip open the phone while the camera is open and it’ll quickly jump to the bigger screen. 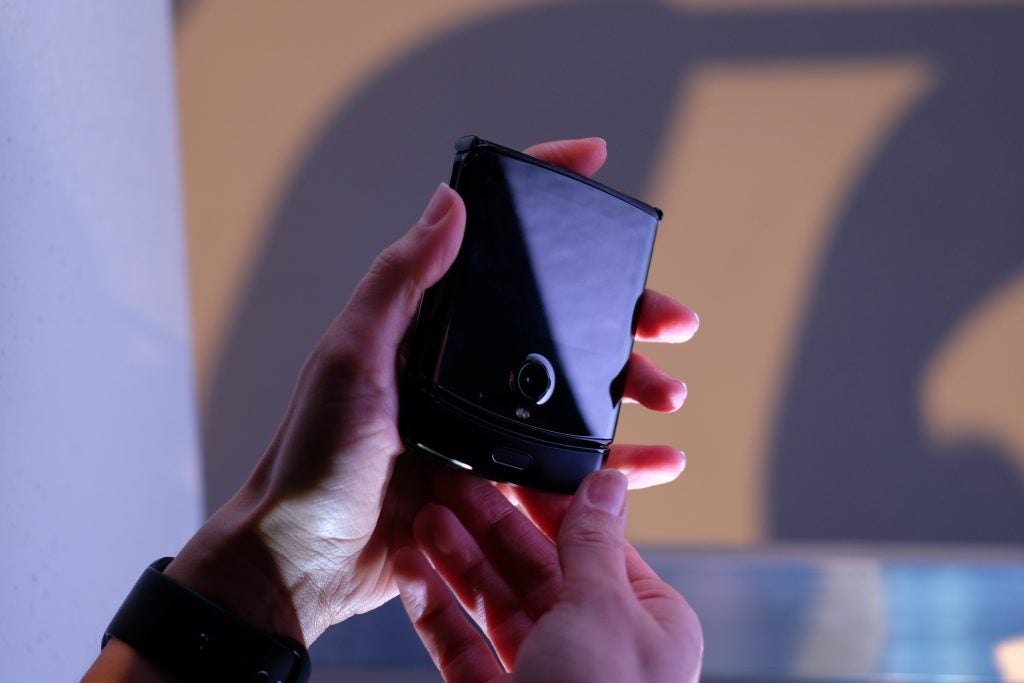 There’s a 2.7-inch screen on the outside

Like the original Razr, there’s a protruding chin on the bottom (now complete with a fingerprint sensor) where the display folds into. It’s a design quirk that I assume is there not only for its similarity to the original but also to house some of the components that simply don’t fit into the ridiculously thin shell. It does, however, make it quite tricky swiping up on the display as my finger would keep on hitting the chin. Maybe this is just something I will get accustomed to after a bit of extended use.

Another minor distraction is the notch on the top of the screen. This houses a front camera that Motorola said should purely be used for video calling (you can use the main sensor to take better selfies when the clamshell is shut) along with a speaker. It’s far from the ugliest notch out there but it’ll still cut into video. 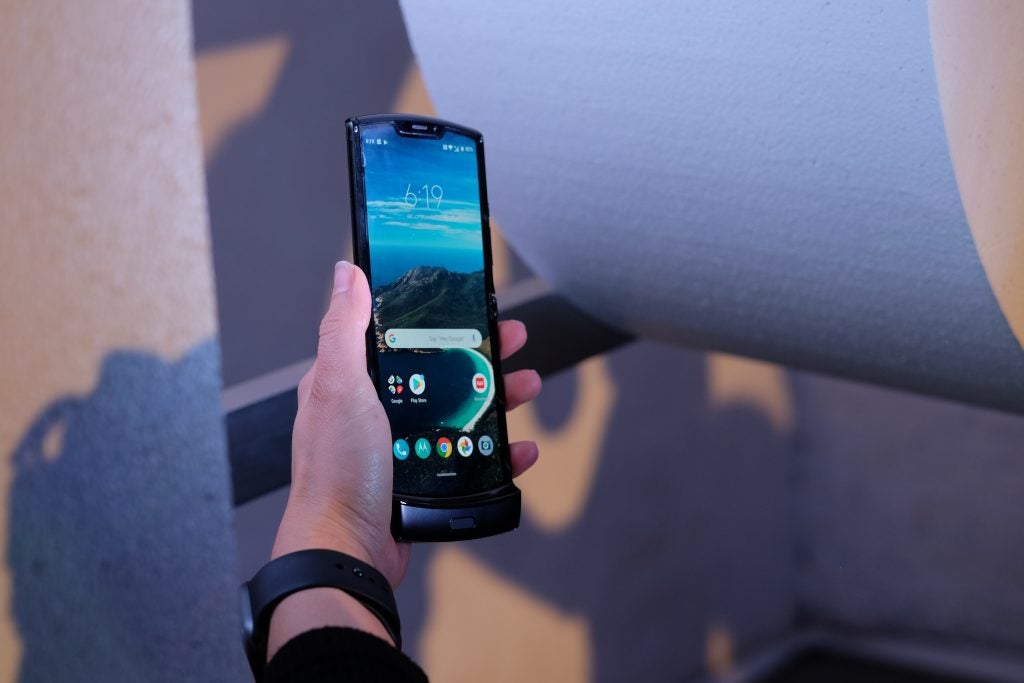 The main display is 6.2-inches

The Razr’s biggest strength is its design. It feels weighty, almost like a piece of jewellery, when shut and everything just fits together in a way that the Galaxy Fold doesn’t. There’s no big air gap for debris to get stuck in and everything is flush. It’s small too, almost incomparably when shut. Where the Fold is trying to give you a tablet in a (kind of) phone form-factor, the Razr is giving you a modern 6.2-inch smartphone in the size of something that’ll fit easily into any pocket, handbag and or even the top pocket on a shirt.

It’s a phone that knows its own history, too. Dig through the settings menu and you can access a Retro Mode that’ll turn your $1500 investment into a mock 2004 Razr with the ability to just ring and text. 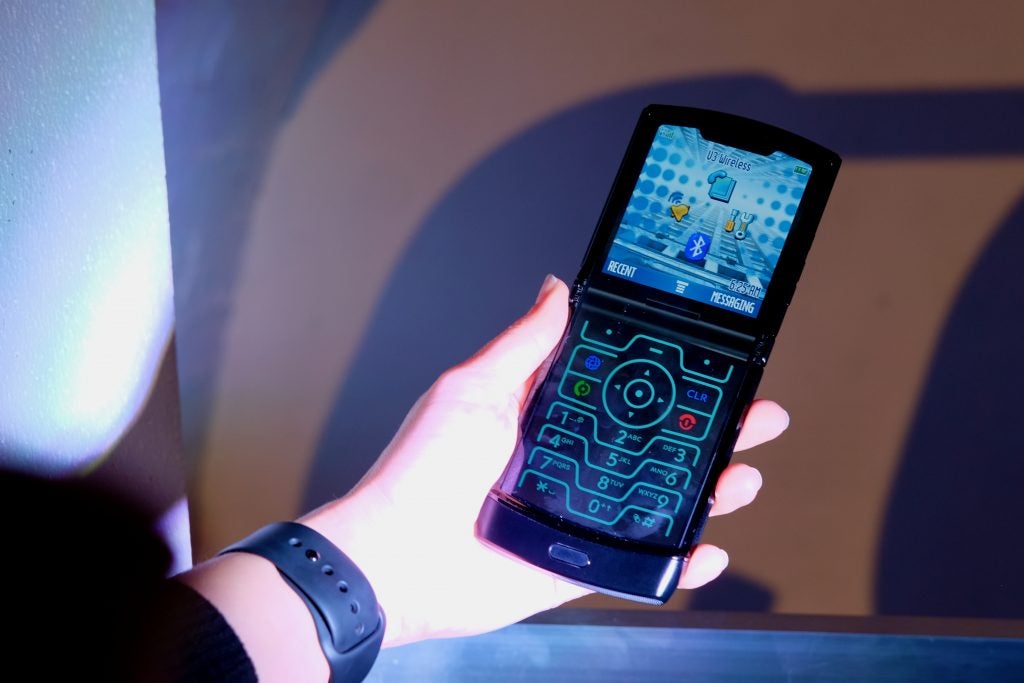 The Razr is all about the look and an ‘exclusive’ image it wants to create. What it’s not trying to be is a high-performing smartphone with the grunt to overthrow the Note 10 Plus, OnePlus 7T Pro and iPhone 11 – even though you’ll likely be able to buy two iPhone 11s for the same price.

There’s no 5G, no wireless charging, no Android 10 and only a splash-resistant coating instead of a full IP-rating. You’ll also have to make do with Qualcomm’s mid-range 710 chipset and 6GB RAM, rather than a flahship-worthy 855. This shouldn’t make too much difference though, as this is still a very capable chip with enough graphical power to comfortably play the majority of Android games.

Where more of my concern lies is with the small battery and the fairly uninspiring camera. The battery, for example, is just 2510mAh and retains the 15w charging speeds of previous Motorola phones. This is, to put mildly, a small battery for an Android phone in 2019, and with it powering two screens I am not optimistic about it comfortably lasting all day. The Motorola reps on hand were quick to point out that having the smaller outer display with alter usage habits and likely mean you won’t need to open it quite so much but I still need some more convincing. 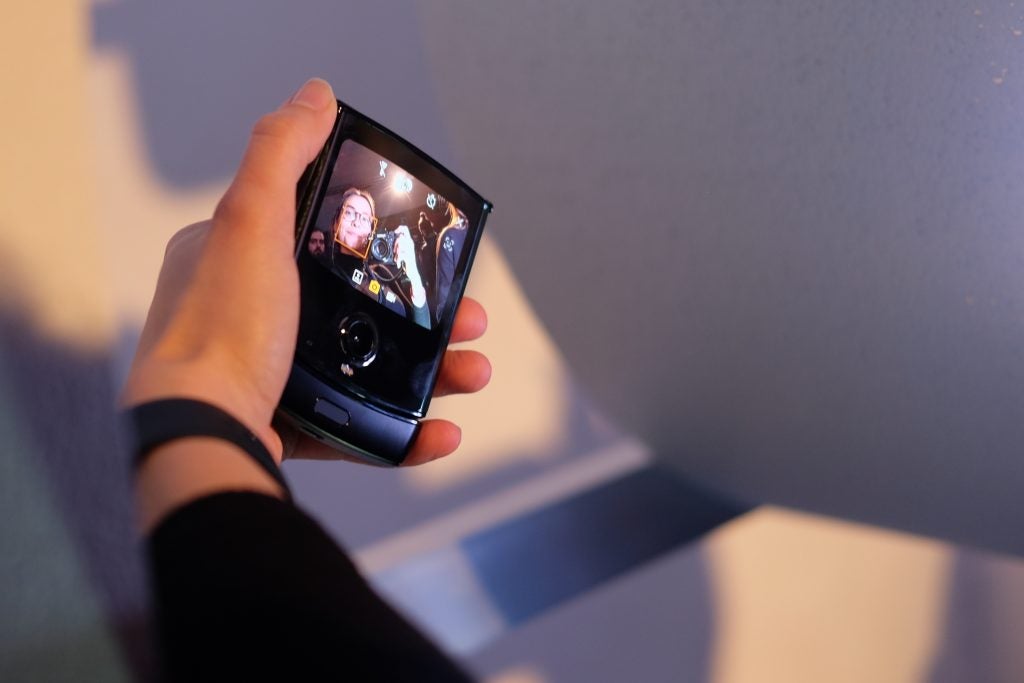 You can take selfies with the phone closed

Then there’s the camera – a feature that was given very little stage time during the launch event. There’s a 16-megapixel sensor with an f/1.7 lens just below the outer display alongside a ToF sensor for, I assume, added depth data in the portrait mode. Motorola wants you to use this camera for pretty much everything: regular photos, selfies and videos. That’s mainly because the camera on the inside is only 5MP.

To give the phone credit, the demo room I was in for my hands-on was virtually pitch black (as you can probably tell by the product shots) and not a great environment for taking photos, but you’re still looking at just a single-sensor. With most phone now packing multiple cameras, the Razr feels a bit limited in what it can do.

The Razr 2019 is a phone brimming with nostalgia and this both a positive and a negative. Like the Galaxy Fold, the Razr 2019 feels like a first-gen product and will likely only be for a very select few.

Due to way it folds you’re not really getting anything over-and-above a regular 6.2-inch phone – aside from the fact it’s very small in your pocket. Is this enough of a benefit to forego a truly high-end, multi-camera system and battery life that won’t need babying? I am yet to be convinced.

Related: Here are the best phones you can buy

What I can say with confidence is that this is a gorgeous, fantastically well-built smartphone that feels a lot more complete than the Galaxy Fold. The way the display folds without leaving a huge crease on the display is a massive plus for me.

But really the most exciting thing is the experimentation here. After years of all phones looking virtually the same, we might just have entered a decade when they’re about to get a bit more visually inventive again – and that can only be good for everyone.